Life continues at Botany Pond, and new life is brewing! Honey and Dorothy are still inseparable companions, always joined by Shmuley the Drake. Neither has started nesting yet, for the weather is still dicey. But once they begin making a nest, ducklings will appear within five weeks or so (they lay one egg per day followed by simultaneous incubation of all the eggs, which takes 28-29 days). Last year, Dorothy’s ducklings appeared on May 5 and Honey’s on May 7, which of course led to a fracas and Honey’s ducknapping of all the babies. But she was a good mom. Dorothy renested and produced a new brood of six, which she kept. 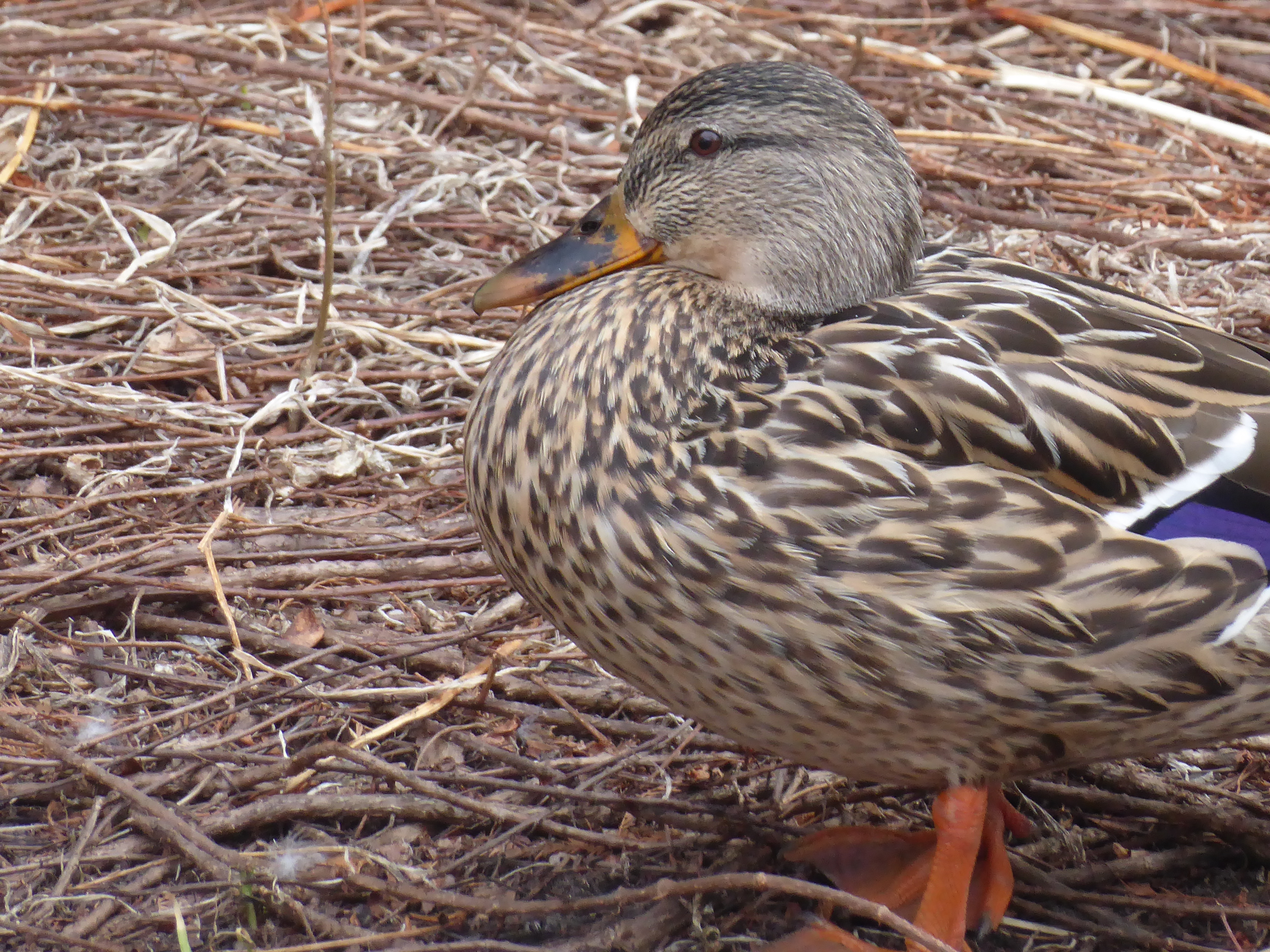 Dorothy having a nap, closing one eye at a time: 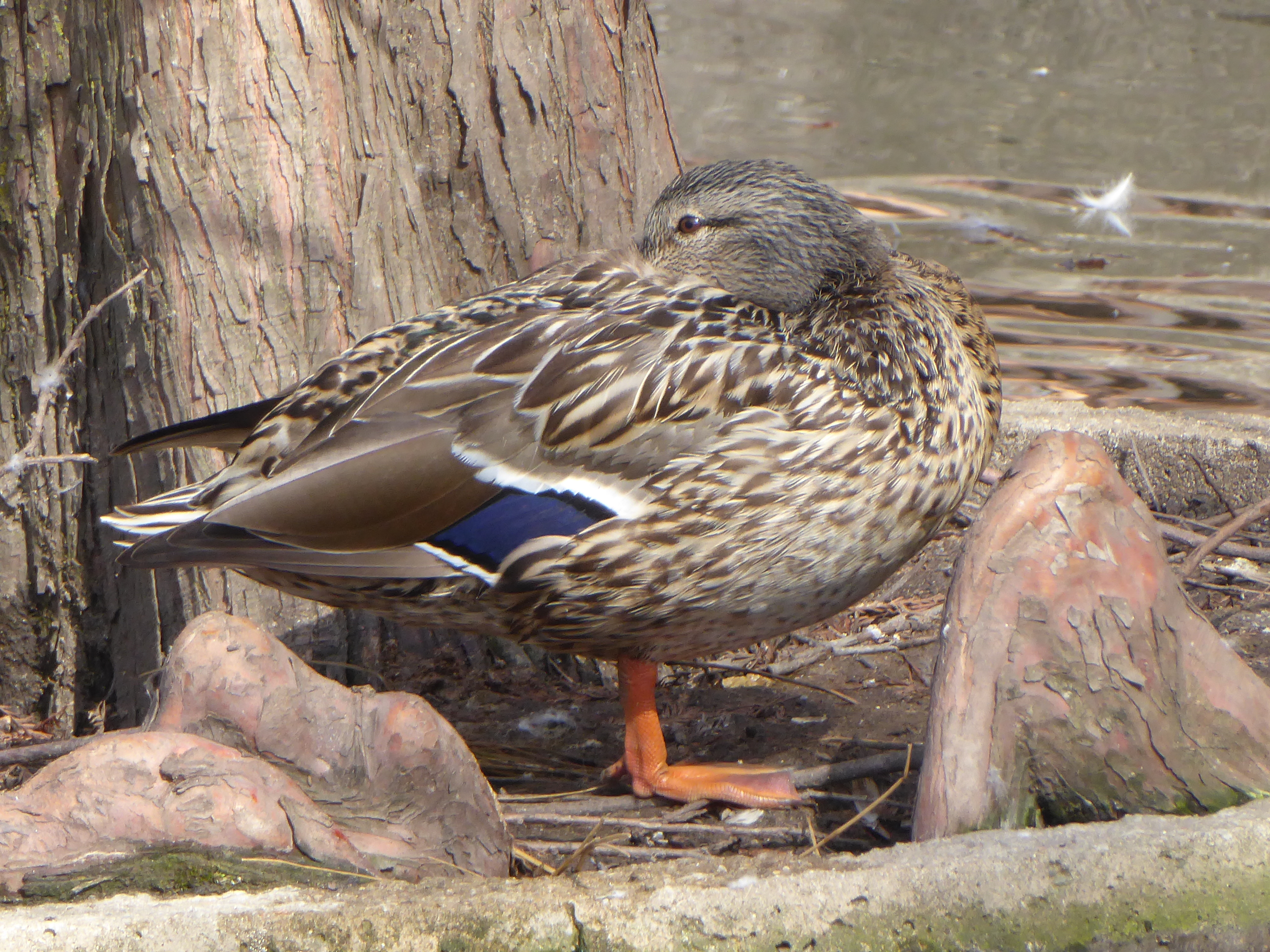 And the trio, which we call the Armada as they always steam across the pond together, forcing all other ducks to flee. Can you tell Dorothy from Honey? 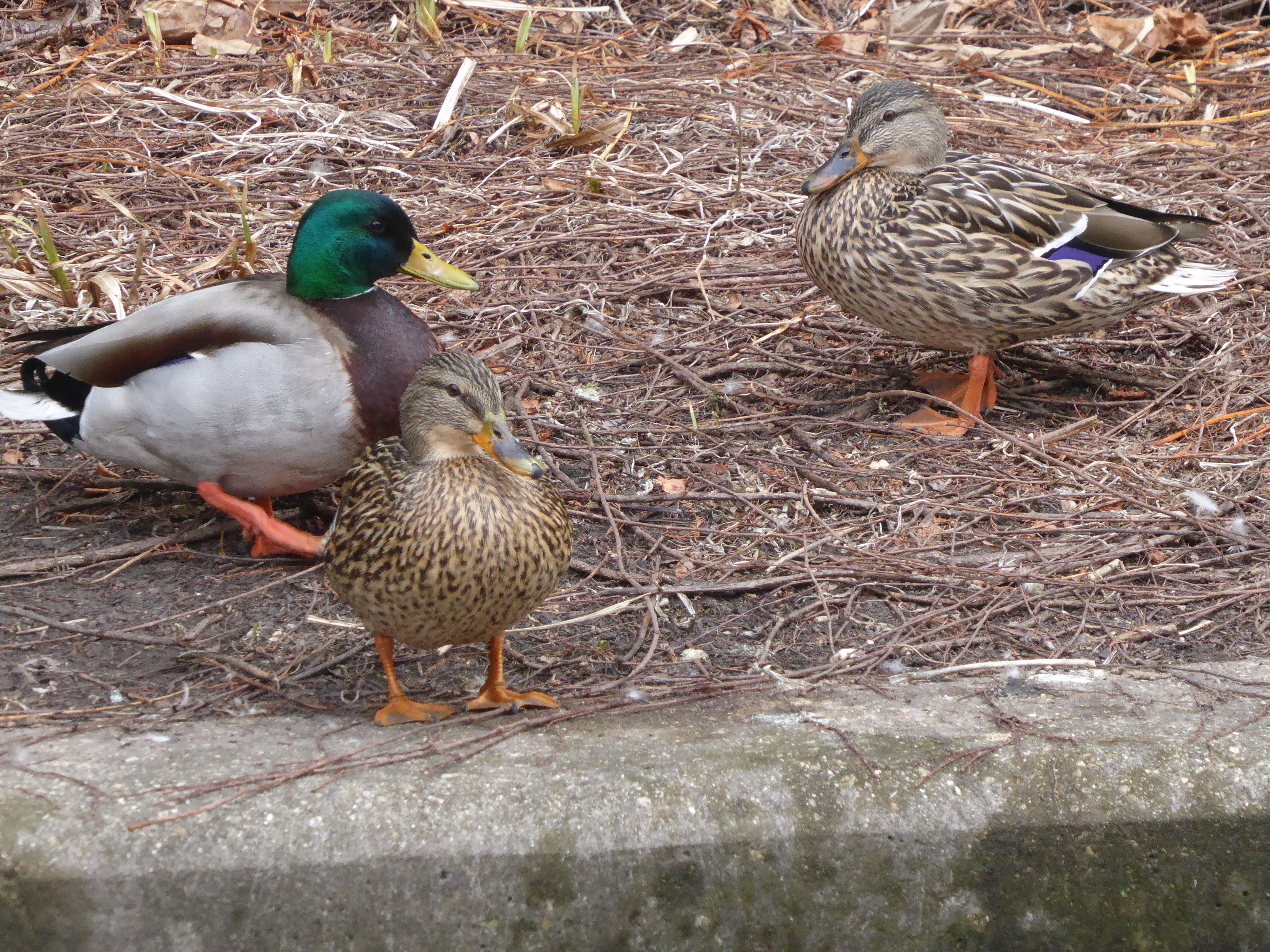 Honey is relatively silent, and I’ve rarely heard her quack. But here she opens her bill and sounds off:

Honey and Shmuley are the alpha female and male of the pond, and Dorothy is the beta female. Here they are chasing the other ducks off Duck Plaza. Note Honey holding her head by her side and bobbing it up and down—a sure sign of aggression—and then charging in the aggressive posture with head down and neck extended.

First turtle of the season! There are many, but they emerged only when the weather was warm the other day. We will see many more in days to come: 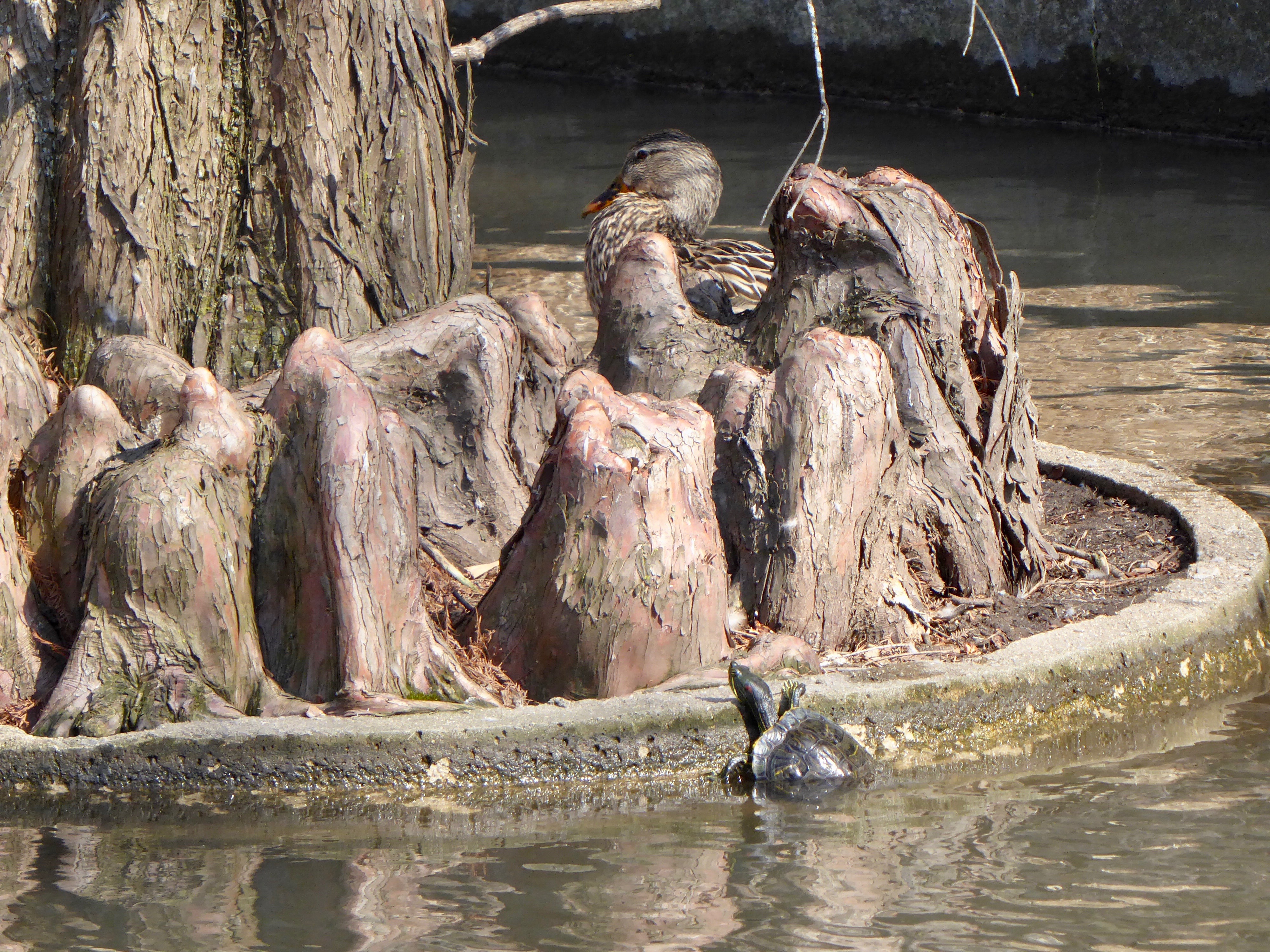 A formal portrait of Honey. She’s in excellent shape, putting on the fat before she starts nesting (hens lose about 30% of their body weight during the month they sit on eggs). 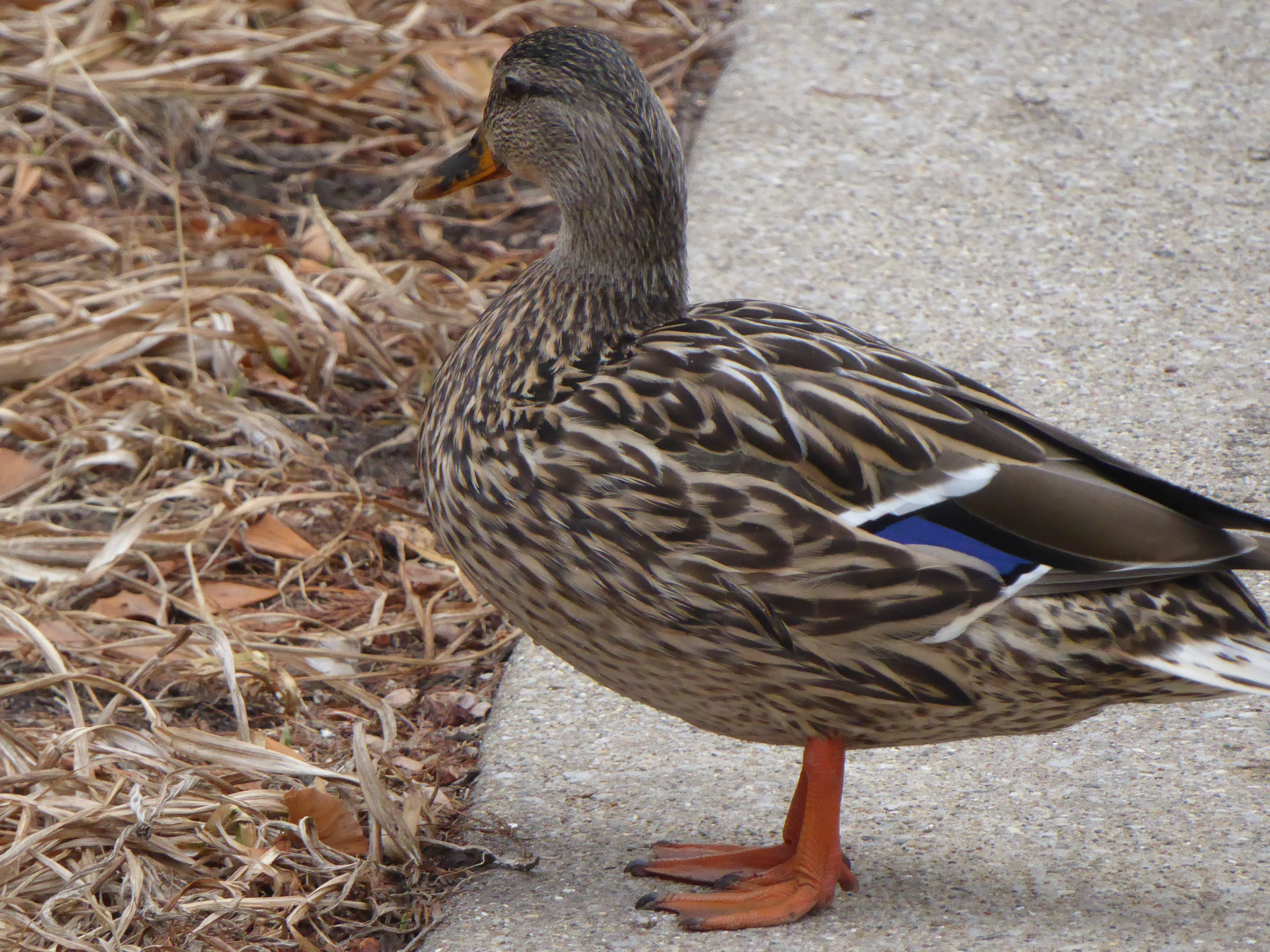 This behavior was new to me. An itinerant hen invaded the pond and swam very low to the water, holding her head low and parallel to the surface while sweeping it back and forth. I’m told that this is a solicitation for copulation. The two videos below show that behavior.

New hen, who dat? We have a new hen at the pond that we cannot resist feeding. She is the very graceful Misty, named after the ballerina Misty Copeland. We called her that because her neck is very long and graceful, and she’s thin like a ballerina. When she first showed up about two weeks ago, she was skinny and starving: I’ve never seen a hen eat so much! But now she’s getting up to speed, and we’ve decided to feed her along with Dorothy and Honey and Shmuley.

Misty has a drake boyfriend, too; we call him Clinton. That’s after Clint Eastwood, who starred in the movie “Play Misty For Me.”

Look at the neck on that duck! 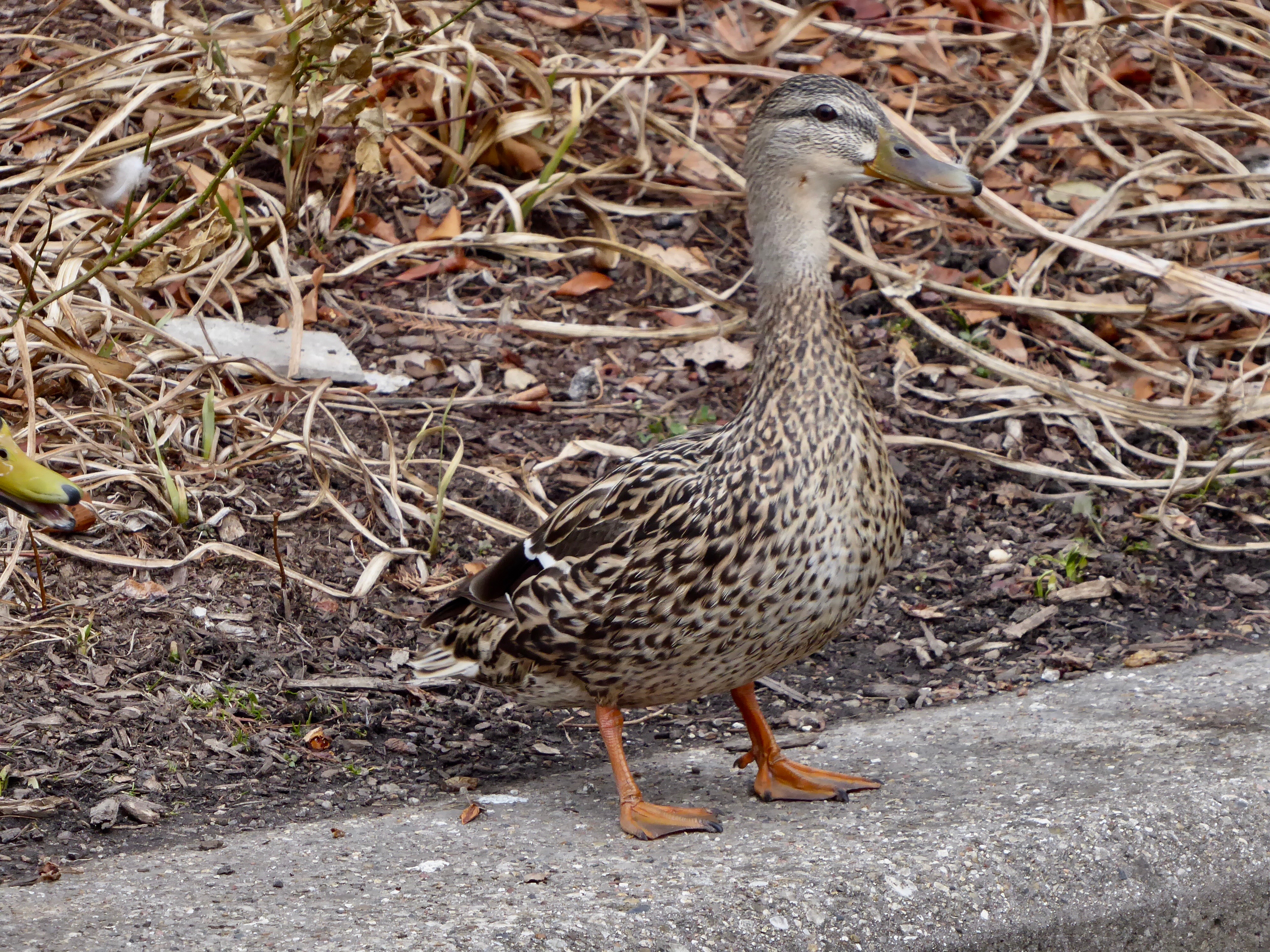