I don’t know what’s going on in Arkansas, but they’ve signed one illegal abortion bill into law this week, and the legislature will consider a bill to teach straight creationism (no, not Intelligent Design [ID] and not “scientific creationism) in public schools. These bills are clearly meant to test Roe v. Wade —and the validity of teaching the Bible as science—in the new, extra-conservative Supreme Court.

As you may recall, Roe v. Wade started in Texas, where Norma McCorvey (“Roe”) brought suit against the state for its law prohibiting all abortions except those to save the mother’s life. The case was appealed up to the Supreme Court, where a 7-judge majority ruled that abortion could not be completely prohibited, striking down the Texas law. (McCorvey gave birth before the Supreme Court ruled, and put the baby up for adoption.)

You may also remember that the legality of abortion depended on the trimester. As Wikipedia notes:

The Court settled on the three trimesters of pregnancy as the framework to resolve the problem. During the first trimester, when it was believed that the procedure was safer than childbirth, the Court ruled that the government could place no restriction on a woman’s ability to choose to abort a pregnancy other than minimal medical safeguards such as requiring a licensed physician to perform the procedure. From the second trimester on, the Court ruled that evidence of increasing risks to the mother’s health gave the state a compelling interest, and that it could enact medical regulations on the procedure so long as they were reasonable and “narrowly tailored” to protecting mothers’ health. Since the beginning of the third trimester was normally considered to be the point at which a fetus became viable under the level of medical science available in the early 1970s, the Court ruled that during the third trimester the state had a compelling interest in protecting prenatal life, and could legally prohibit all abortions except where necessary to protect the mother’s life or health.

Well, Arkansas has passed a law identical to the Texas law that was declared unconstitutional. The governor signed it on Tuesday. There are no exceptions for rape or incest.

Click on the screenshot to read the CNN report.

Arkansas on Tuesday became the first state in 2021 to enact a near-total abortion ban — a bold step by abortion opponents seeking to renew challenges to the Supreme Court’s landmark 1973 Roe v. Wade ruling that legalized the procedure nationally.

The court, which now leans conservative, has shown it is open to considering abortion restrictions, a perceived opportunity that many anti-abortion advocates have pushed lawmakers to pursue.

The Arkansas bill, SB6, bans providers from performing abortions “except to save the life of a pregnant woman in a medical emergency,” and makes no exceptions for instances of rape, incest or fetal anomalies. Those found to violate the law could face a fine of up to $100,000 and up to 10 years in prison.

“I will sign SB6 because of overwhelming legislative support and my sincere and long-held pro-life convictions,” Arkansas Gov. Asa Hutchinson, a Republican, said in a statement. “SB6 is in contradiction of binding precedents of the U.S. Supreme Court, but it is the intent of the legislation to set the stage for the Supreme Court overturning current case law.”

The abortion law is slated to go into effect 91 days after the end of the Arkansas legislative session, which is currently set for May 3, according to Arkansas State Sen. Jason Rapert, who sponsored the Senate bill.

The ACLU and Planned Parenthood plan to challenge the law. Further, Supreme Court already has ample material if it wanted to overrule Roe v. Wade. Perhaps it has no appetite to do so. Can a lawyer weigh in here?

Of the 11 so-called gestational bans — which bar abortions past a certain point in pregnancy — passed since the start of 2019, none have gone into effect after most of them have been blocked by judges. Those include a similar near-total abortion ban passed in Alabama in 2019 and an 18-week bill passed by Arkansas in 2019.

“The Supreme Court has about 20 bills in front of them that they could take up if they wanted to,” said Gloria Pedro, regional manager of public policy and organizing for Arkansas and Oklahoma at Planned Parenthood Great Plains Votes, the group’s advocacy arm. “So writing a bill that’s the equivalent of a demand letter to SCOTUS, it’s just impractical and a waste of time and taxpayers’ money.”

About the rape and incest inclusion, Senator Jason Rapert, sponsor of the bill, said this: “”How could we look at any human baby and say that they are not worthy of life simply because their birth was a result of a violent act.”

They are not clearly thinking about the mother, who, besides being traumatized by a rape or incestuous act, has to carry its fetal result for nine months.

Now about their regressive creationism. . .

The Encyclopedia of Arkansas has a good article on the history of teaching evolution (or not teaching it) in that state. It turns out that the U.S. government’s legal stand on teaching creationism was largely forged by cases in that state.

The Supreme Court case of Epperson v. Arkansas (1968) began when a high-school biology teacher, Susan Epperson, sued for the right to teach evolution in her biology class. That was illegal since Arkansas had a law prohibiting the teaching of evolution (this was in 1968!). The state Supreme Court upheld the law, but the Big Supreme Court overturned it on First Amendment grounds. As the encyclopedia notes, “In issuing the majority opinion, Justice Abe Fortas noted ‘that the First Amendment does not permit the State to require that teaching and learning must be tailored to the principles or prohibitions of any religious sect or dogma’.”

That brought an end to rules outlawing the teaching of evolution. In another famous it violated the Establishment clause of the First Amendment because “creation science” was not science but religion. I love to quote judge Overton’s final paragraph of that decision:

At that time, “scientific creationism” was the confected way to try sneaking religion into the classroom. Later Intelligent Design became an even sneakier way, for it didn’t mention God, only a “designer.” However, Judge John E. Jones III, presiding in a federal district court in Pennsylvania, saw through this ruse, striking down the Dover Area School District’s requirement that ID be taught alongside true evolution. Again, the decision was based on First Amendment grounds, since Jones deemed ID “not science”, but a religious view.

With that long introduction, here’s the very short bill filed yesterday in the Arkansas legislature. It drops the charade of ID and “scientific creationism” and says that a teach may teach creationism if they want: 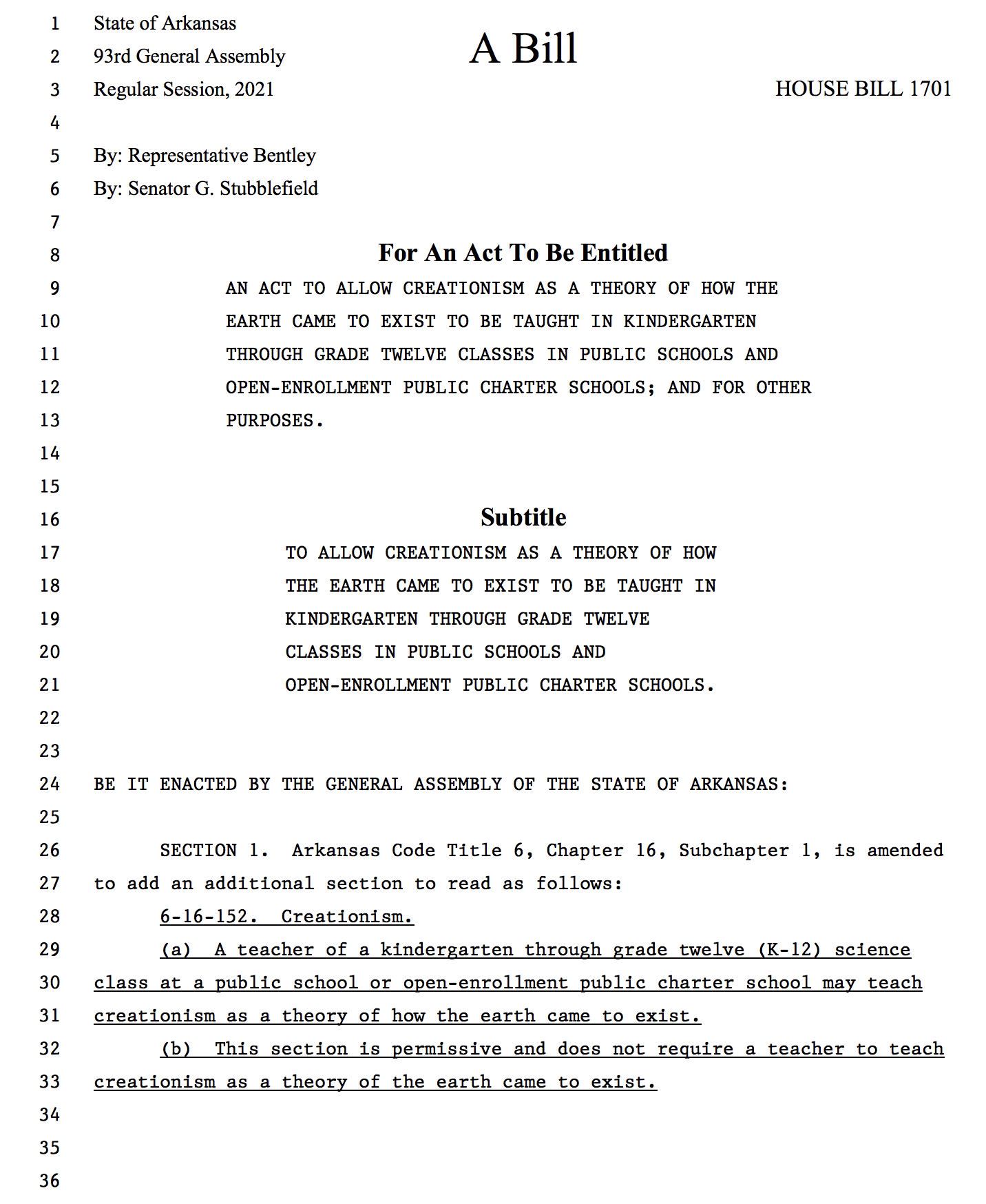 Under present federal law, this bill is unconstitutional, as it allows teachers to teach a religious view in public school classrooms. It will be struck down, for I can’t imagine that the Supreme Court, conservative though it is, allowing the teaching of Biblical creationism, much less any religious doctrine, in a public school. If the judges somehow see creationism, ID, or “scientific creationism” as “science” worthy to be taught alongside evolution, they are truly ignorant, nay, stupid.