Shoot me now! And I haven’t yet finished DiAngelo’s entire first book, White Fragility (it’s online at the U of C library, but I hate reading online, so I can only read bits at a time). I just finished Kendi’s How to be an Antiracist, which was tolerable, but only with the concomitant consumption of a Family Pack of Mint Oreos (they were on sale). I have a feeling that White Fragility, read from beginning to end, will require something a bit more alcoholic.

The new book (below) is issued by my own publisher, Penguin Random House (I call them “Random Penguin”). Fortunately, we don’t have to deal with this book until June 29, the day when it hits the newsstands. 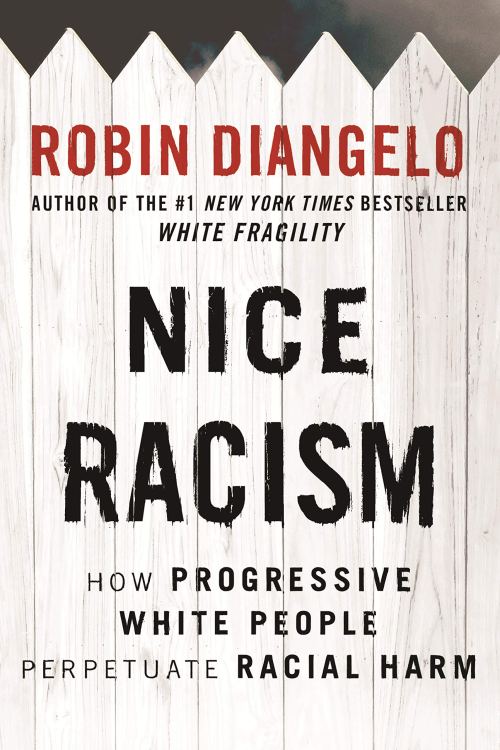 In White Fragility, Robin DiAngelo explained how racism is a system into which all white people are socialized and challenged the belief that racism is a simple matter of good people versus bad. DiAngelo also made a provocative claim: white progressives cause the most daily harm to people of color. In Nice Racism, her follow-up work, she explains how they do so. Drawing on her background as a sociologist and over 25 years working as an anti-racist educator, she picks up where White Fragility left off and moves the conversation forward.

Writing directly to white people as a white person, DiAngelo identifies many common white racial patterns and breaks down how well-intentioned white people unknowingly perpetuate racial harm. These patterns include:

-rushing to prove that we are “not racist”;
-downplaying white advantage;
-romanticizing Black, Indigenous and other peoples of color (BIPOC);
-pretending white segregation “just happens”;
-expecting BIPOC people to teach us about racism;
-carefulness;
-and shame.

DiAngelo explains how spiritual white progressives seeking community by co-opting Indigenous and other groups’ rituals create separation, not connection. [JAC: DiAngelo LOVES separation: her whole fame and fortune is based on perpetuating racial discord, not connection.] She challenges the ideology of individualism and explains why it is OK to generalize about white people, and she demonstrates how white people who experience other oppressions still benefit from systemic racism. Writing candidly about her own missteps and struggles, she models a path forward, encouraging white readers to continually face their complicity and embrace courage, lifelong commitment, and accountability.

Nice Racism is an essential work for any white person who recognizes the existence of systemic racism and white supremacy and wants to take steps to align their values with their actual practice. BIPOC readers may also find the “insiders” perspective useful for navigating whiteness.

The list of how we perpetuate racial harm is familiar, even the first point (“rushing to prove that we are ‘not racist'”), which is the point that makes the whole Critical Race Theory unfalsifiable. (Note the pejorative word “rushing”, which implies guilt.) If you say you’re not racist, you are. In fact, all white people are racist, and there’s nothing you can do to disprove that. It is, as John McWhorter would say, not a testable empirical statement, but a religious dictum.

I’m not sure why “carefulness” does harm, but her notion that progressive antiracists are the most harmful of all white people surely can’t hold water. Are there data on that? I’m sure that Bernie Sanders would be shocked to discover that he’s more harmful to African-Americans than, say, Mitch McConnell or David Duke.

And it’s okay to generalize about white people? Is it okay to generalize about black people, too?  In fact, both kinds of stereotype are attacked by Ibram Kendi in his antiracist book: he goes after policies, and refuses to countenance generalizations about individuals of a given group.  Finally, what is this odious “ideology of individualism”?  Is she talking about Ayn Rand here, or saying that tribalism is essential for a well functioning society?

I will finish White Fragility, but I am not going to read DiAngelo’s new book—not only on the grounds that it seems to make no points I haven’t heard before, but also because it could harm my health. Our arteries can take only so much pressure, you know.

48 thoughts on “Robin DiAngelo has a brand new book”