Imagine if Robespierre, after being guillotined during the Terror in France, was able to regrow his entire body just from his head alone. Well, that’s the equivalent of what some sea slugs can do, as reported in the new issue of Current Biology (click on screenshot below to access article, pdf here, and reference at the bottom).

In fact, two species of sacoglossan sea slugs, members of a group of shell-less mollusks, can not only grow a new body from just the head, but can do it twice in a row. Amazingly, the body that gets regrown includes the heart and the digestive system, which makes one wonder: how can they regrow a whole body without the nutrients gleaned from digestion? And how can the head live without a heart to supply it with oxygen. Well, that’s part of a very cool story. 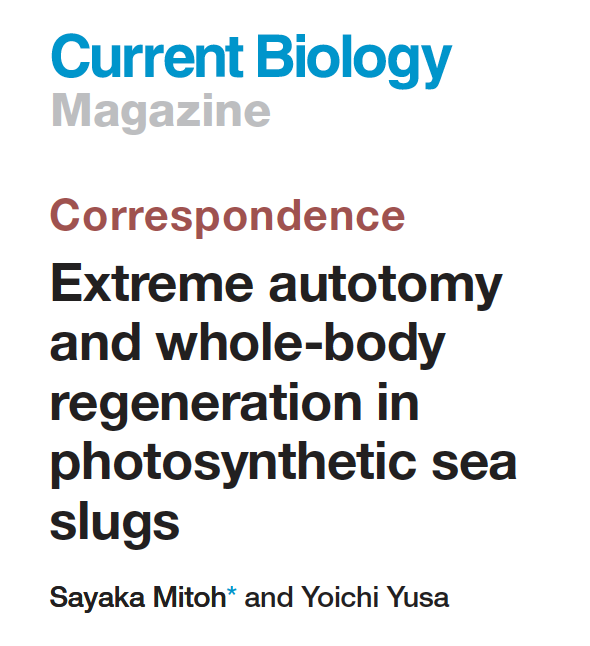 Two Japanese researchers found that a substantial proportion (33%) of two species of sea slugs (Elysia cf. marginata and E. atroviridis) were observed in the laboratory to shed their own heads (“autotomy”, a fancy word for “self amputation”). Moreover, the heads regenerated new bodies—and quite quickly: within 20 days or so. The shed bodies, which did not regenerate new heads but died, contained the heart and the digestive systems.  The heads, meanwhile, closed the wound after “voluntary” separation, began nibbling on algae within hours, and the regeneration of the entire body was done within three weeks.

Here’s a shot of four phases of the autotomy from the paper (as is the caption):

The 10 mm scale bar is about 0.4 inches.  By day 22 they’re fully whole again, with a beating heart and a digestive system. See the green color? Those are algae that live in the mollusk’s cells: a key to how they might get the energy to regenerate.

Here’s a tweet with a video of the separated head and body. It’s just bizarre!

Sacoglossan sea slugs don't mind losing their heads. Not only can the sea slugs elect to detach their heads and survive, but they can regrow a whole new body. Read more in @CurrentBiology https://t.co/7ueo5HL0Vn@NaraWomensUniv
Video: Sayaka Mitoh pic.twitter.com/oL5bh9psQ7

But wait! There’s more! The authors collected 82 sea slugs from the ocean that were all parasitized by the copepod Arthurius, which lives in the body (not the head) and inhibits the sea slug’s reproduction. Many of the parasitized slugs got rid of their bodies when brought to the lab. Here’s the parasite:

This gives a clue as to why they’re ditching their bodies: to get rid of a parasite that lives in the body and impedes reproduction of the sea slug. Thus, it might be adaptive to discard your body along with a parasite, even if it takes substantial energy to regrow a new body.

Of 82 parasitized individuals collected from the wild, 41 shed their bodies. Of these, 13 regenerated those bodies, but the rest died. So there’s no guarantee that you’ll survive if you shed your parasite-laden body. But if you’re permanently sterilized by the parasite, or your reproduction is severely reduced, it may still be adaptive to take the chances and break apart; your net fitness may be higher that way. After all, the regenerated bodies, lacking parasites, are perfectly fertile.

More indication that this trait is adaptive is that these sea slugs have a “transverse groove” at their neck—the line where the breakage occurs. This implies that parasitism and body-shedding was a regular feature of the sea slugs’ past. Here’s the groove, which you can see if you look closely:

When the authors tied nylon string around the groove, the slugs broke apart at this position, shedding a body that represents 80-85% of their total weight. When mock predator attacks took place, however, like pinching the head and cutting parts of the body, they did not break apart. This suggests that autotomy, if it’s an adaptation, is an adaptation to get rid of parasites and not to escape predators. (Many animals shed body parts when attacked, like lizards and salamanders that drop their tail when a predator grabs it.)

One question remains: where do the severed heads get the energy to regenerate an expensive body? The answer is another fancy word: kleptoplasty. Here’s how the authors explain it:

Why these sacoglossans can regenerate their body even if they lose most organs remains unclear, but we suspect involvement of kleptoplasty. In Elysia, a highly branched digestive gland is spread over the majority of its body surface, including the head, and the gland is lined by cells that maintain ingested algal chloroplasts. Thus, these sacoglossans can obtain energy for survival and regeneration from photosynthesis by kleptoplasts, even when they cannot digest food.

My question in response to this is: “do they get everything they need to regrow a body from the algal chloroplasts, including amino acids, sugars, and fats?”  I suspect they do: where else could they get them? But perhaps a little digestion occurs in the mouth as well.

Where does this fit into biology? The phenomenon of autotomy is well known, as is the ability of many animals to regrow lost parts (you may have done such an experiment with flatworms when you were in high school). What’s unusual here is the regeneration of the entire complex body after it’s jettisoned, including the heart, which you would think was needed to keep the head alive! The authors say this:

Both Elysia cf. marginata and E. atroviridis shed the main body, including the heart. Some other sea slugs also autotomise, but they shed minor body parts such as tails, parapodia, or dorsal papillae. Other invertebrates (e.g., cnidarians, planarians, and asteroids) can regenerate their main body following division. Also, some amphibians are known to have a high regeneration capacity, including tails, limbs, eyes, and even the heart ventricle. However, autotomy in this study is remarkable in that animals with complex body plans can survive even if they lose the main body, including the heart, and subsequently regenerate the whole lost area. The reason why the head can survive without the heart and other important organs is unclear. We have succeeded in a complete rearing of Elysia cf. marginata for multiple generations — thus, they can be used as a model system for studying autotomy and regeneration of the body.

Now it’s no surprise that the animal has the potential to regenerate the body: after all, every cell in a sea slug contains all the genetic information necessary to produce another entire sea slug. But the trick is how to mobilize that information, which is usually inactivated in the wrong parts of the body. (We don’t activate the genes producing a liver, for instance, where our heart is supposed to be.) Somehow there is a mechanism here that makes the regenerating cells totipotent: capable of producing any part of the body starting at time zero. If we could figure out how they do this, we might be able to do it to ourselves, regrowing lost or diseased organs. But that is pure speculation; after all, we are not invertebrates—except for George Bridges at The Evergreen State College.

26 thoughts on “Sea slug regrows entire body from just the decapitated head, or “autotomy with kleptoplasty””