It looks like Biden’s stimulus bill will pass the Senate, and thus the House, but sans the raise in minimum wage, which the Senate parliamentarian nixed on procedural grounds. This is Biden’s first big legislative accomplishment in office, and kudos to him and his team! The GOP, however, is trying to stall the bill by asking Senate clerks to read the bill word by word. It is 628 pages long! That will take about 16 hours, and for what purpose? Thank Ceiling Cat this will be over today, and the Senate can proceed to a vote. I see nothing that Republicans accomplish by this stalling maneuver, though I’m sure that many in the GOP think this is hilarious.

Cat news from the Guardian: A moggy curled up on top of the engine of a fast Londton-to-Manchester train and refused to get down. Efforts to coax it down initially failed, and there was a danger the cat could touch the electrical wires and die. Finally, the passengers were transferred to another train, a bin was pulled up to the car to allow the cat to get down, and the feline made its exeunt stage left. A photo is below:  (h/t: Matthew) 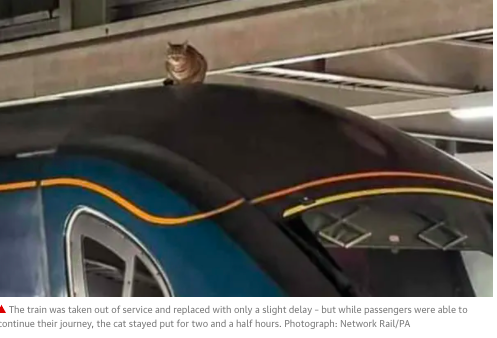 The words “committed suicide” should now be taken out of circulation, at least according to a woman writing at HuffPost whose son, err. . . committed suicide. She argues that that phrase should be replaced by “died by suicide.” I am really sorry for her loss, but it’s hard to imagine you can get closure by forcing others to use different phrases. The rationale:

We don’t say that our elders commit old age or commit death in their sleep. They die, of old age or heart failure. They die, by whatever cause. We don’t blame the one who suffers the disease.

When Austin took his life, he planned ahead. He left letters. He said goodbye, in his own way. And he ended his intense pain in his own way. How can such a desperate decision be considered a crime or a sin? I think saying he committed suicide blames Austin and stigmatizes his death. Haven’t we suffered enough by his loss without a side of ignominy and taboo?

. . . Bring them back to the light, your conversation, your family history, your mantel or photo album, with loving compassion, by proclaiming that they died by suicide,

Suicide is not of course a crime (well, it is in some places, but I’ve never seen any survivor prosecuted) or a sin! “Committed” simply means “took action”. You can’t “commit” a heart attack in the same way.

According to Newsweek (which seems to have become a right-wing site), eBay has now refused to sell the six banned Dr. Seuss books on the grounds that they’re offensive. As the writer notes:

This writer actually has access to a worn copy of one of the out-of-print books, And to Think That I Saw It on Mulberry Street, and listed it on eBay late Tuesday afternoon. On Thursday morning, though, this writer received an email from eBay saying that the listing was removed for violating an “Offensive material policy.”

“Listings that promote or glorify hatred, violence, or discrimination aren’t allowed,” the automated email says. “Dr. Seuss Enterprises has stopped publication of this book due to its negative portrayal of some ethnicities. As a courtesy, we have ended your item and refunded your selling fees, and as long as you do not relist the item, there will be no negative impact to your account.”

Stuff that happened on March 5 includes:

Here’s Copernicus’s heliocentric model in the book’s manuscript. Note the Sun in the center with seven planets around it.  The Index Librorum Prohibitorum was finally abolished as church law in 1965. 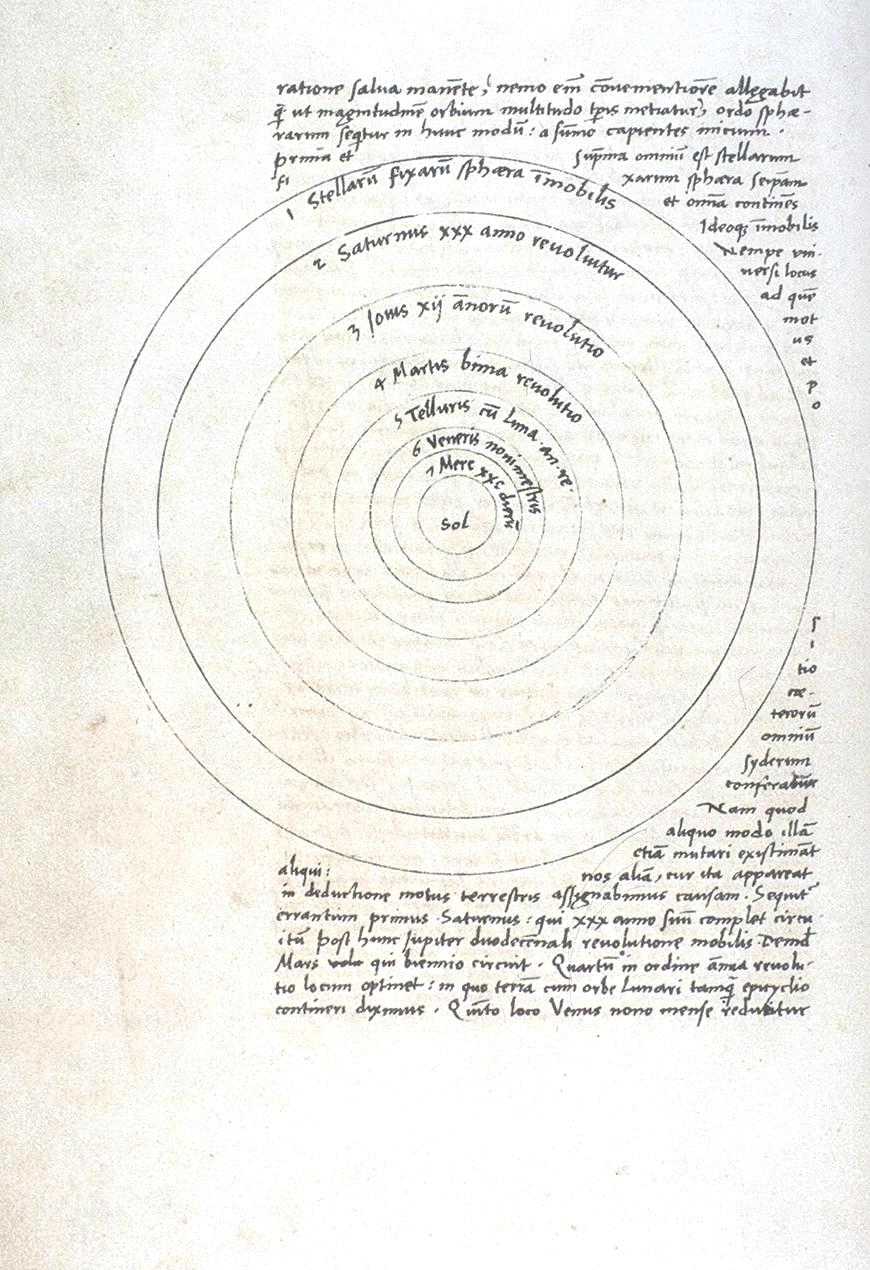 Crispus Attucks is singled out because he was the first American killed in the Revolutionary War, and also because he wasn’t white, though his exact ethnicity is in doubt. I learned that he was black, but it now seems he was part Native American.

A video of part of that speech. The mention of the “Iron Curtain” is right at the beginning:

He used to be on display next to Lenin in a mausoleum, but now, after his fall in reputation, Stalin is buried in the Kremlin wall, the place marked by just a bust (I don’t see any name on it). Here’s his body laid out after death, followed by a photo of his bust at the Kremlin wall: 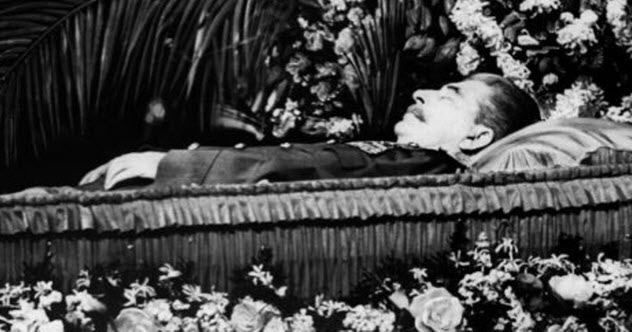 How many people did he kill? Between 9 and 20 million if you include famines that he engineered. 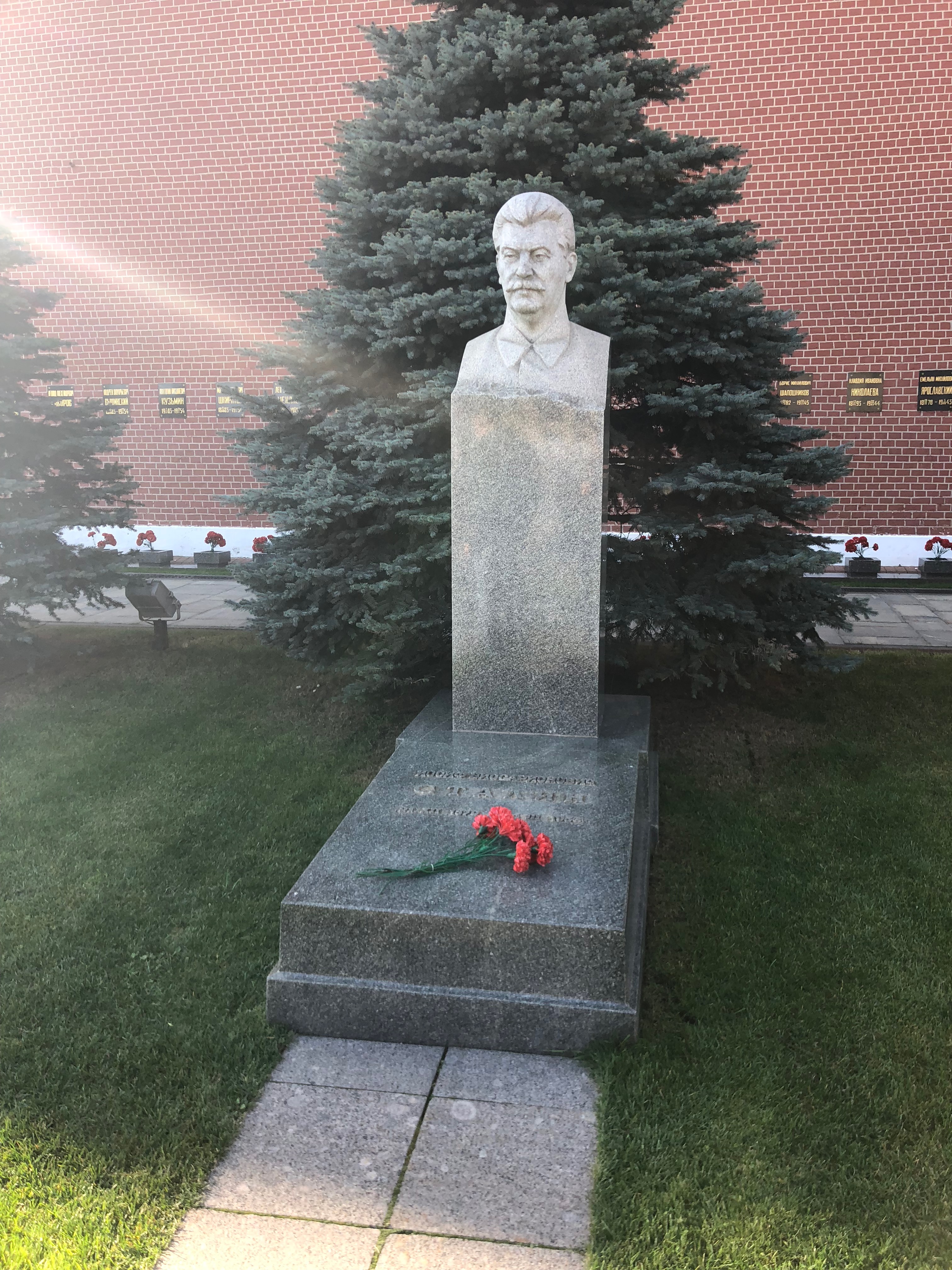 Gibb died of myocarditis at only 30; he had used cocaine for years. Only one of the four Gibb brothers is left now. Here’s a live performance of “Words”:

Those who crossed The Great Divide on March 5 include:

Wikipedia needs to change this to “enslaved person”.

If you haven’t seen the 2020 movie “Mank,” about Mankiewicz’s collaboration with Orson Welles on the script of Citizen Kane, do so.  Here’s the trailer:

Silverheels played “Tonto”, the “faithful Indian companion” of the Lone Ranger. And indeed, Silverheels was a genuine Indigenous American, born in Ontario. Here’s the intro and closing of the show; I used to know all these words by heart:

Meanwhile in Dobrzyn, the editor is looking for one of her staff:

Małgorzata: What are you doing?
Hili: I’m hunting Andrzej. 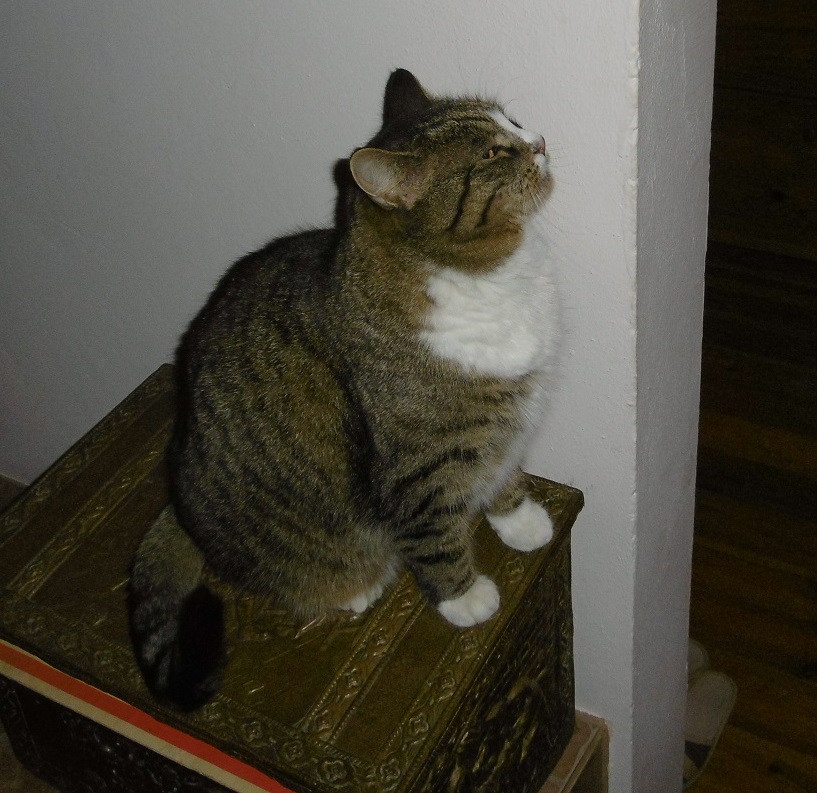 Little Kulka went on an adventure down to the Vistula, trotting behind Paulina all the way down the hill to the river.

Caption: An expedition to the river. (Photo: Mariusz R.)

From a Russian site, Котопедия (Catopedia), a cat with tabby bangs. I’ve never seen a kot like this: 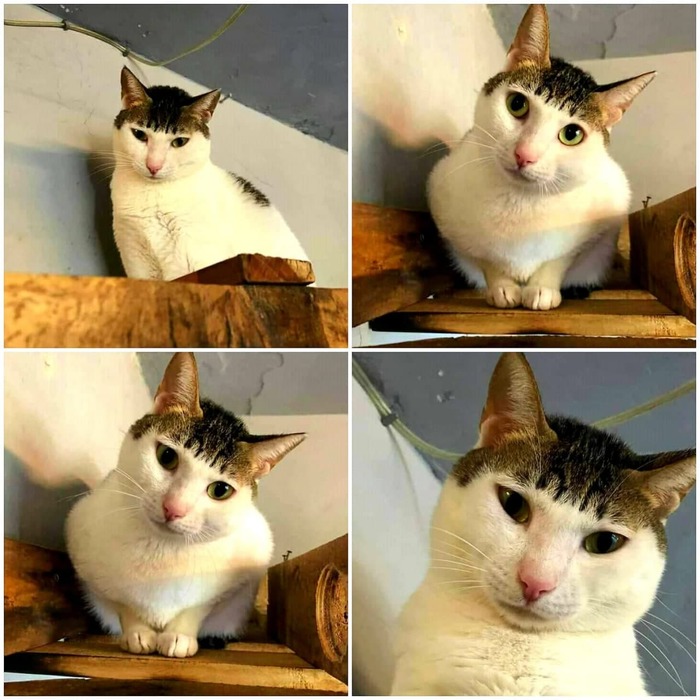 From Facebook. The most interesting thing is that the photographer deliberately sacrificed a good ten cups of cooked rice so they could have this picture: 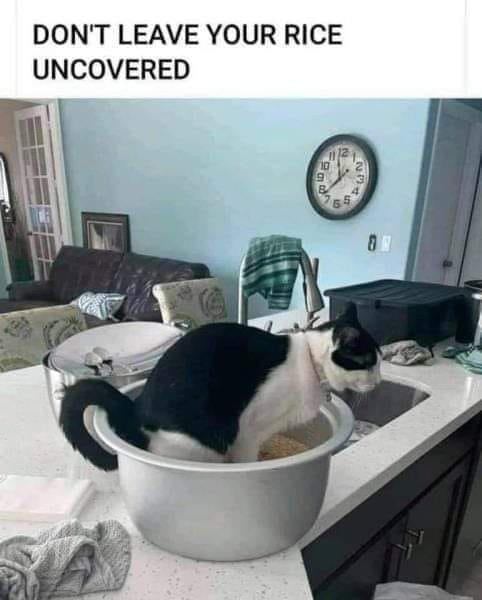 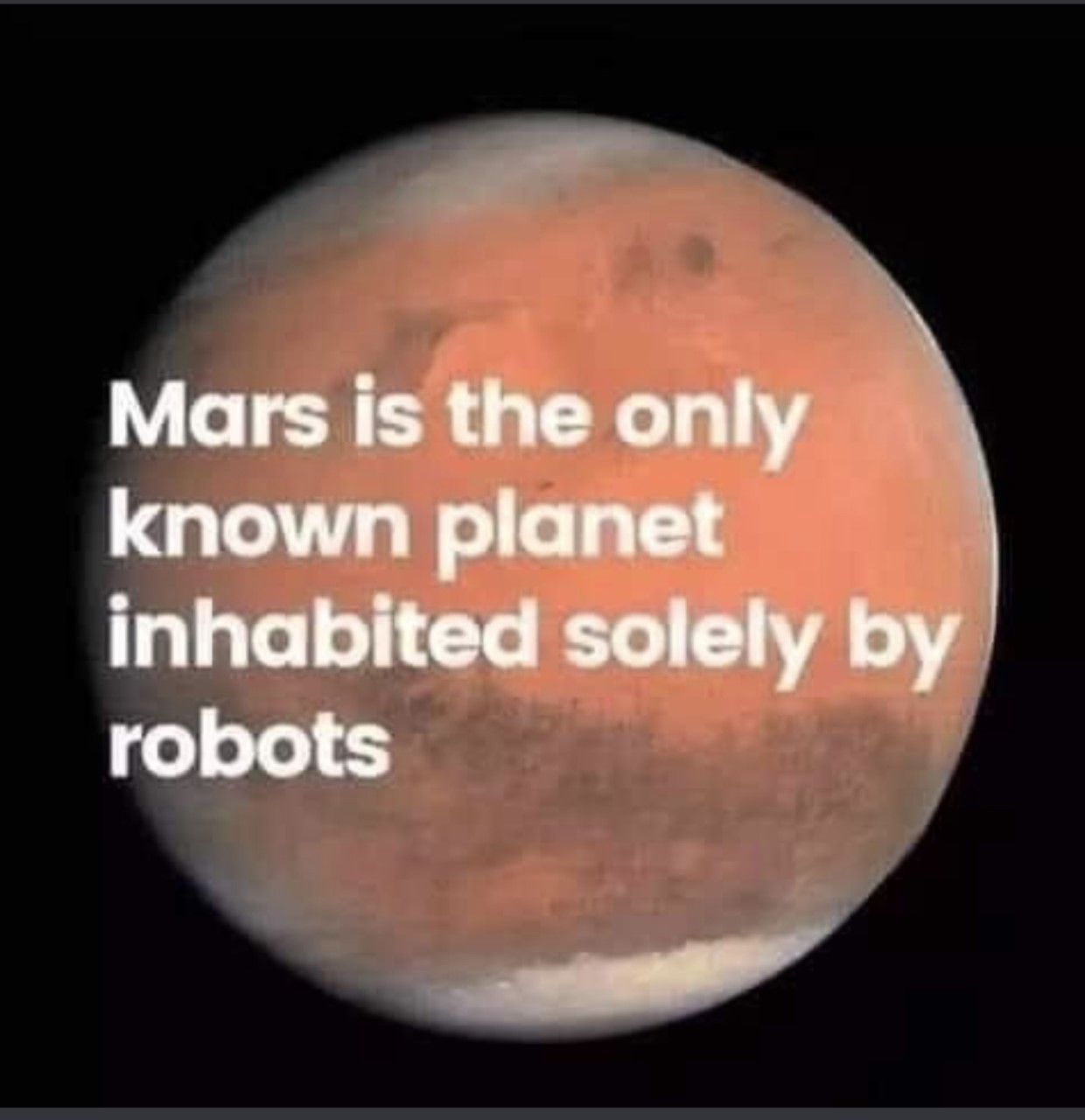 So far today I’ve got a woman fired for claiming that sex is binary, shouted abuse at an old man collecting money for the British Legion, dog-piled people on Twitter for disagreeing with me and burned some books by Dr Seuss.

It’s SO exhausting being on the right side of history.

Found via a link from Matthew: a giant murmuration of starlings that looks like a bird:

"That looked like a bird!"
Watch the amazing moment a murmuration of starlings took on the shape of a giant bird over Lough Ennell in Co Westmeath. pic.twitter.com/OcmkHIbvBa

A tweet from Ginger K. Hard to believe this is real!

Just got a new handheld vacuum cleaner and the instruction manual is one of the funniest pieces of writing I’ve ever read.

I want to stress: this is the directions for a handheld vacuum cleaner. pic.twitter.com/6mqY5pI8dd

Tweets from Matthew. First, a melanic fox! (Click to go to the BBC article to read more.)

This is the only news I want today. #blackfox https://t.co/lVr1lyW0j6

This cheese salad has seen some shit.

Be. Still. My. Heart! An ocelot kitten was photoed on a remote camera in Texas!

According to biologists at Laguna Atascosa National Wildlife Refuge, which sits on the border with Mexico, this kitten joins a recent “baby boom” of ocelots on the refuge over the past two years. pic.twitter.com/BQlBQlTPsf

And a dorsoventrally compressed beetle with a good caption: