John McWhorter has got hold of a newish education project—a curriculum guide for antiracist math instruction called “A Pathway to Equitable Math Instruction: Dismantling Racism in Mathematics”—and he’s furious about it. But “furious” in a McWhorterian way means that he completely takes the “curriculum” apart in a calm and elegant fashion.

A week ago I had prepared a draft post on this handbook, based on pages that deal not with mathematics, but how math is supposedly used to buttress white supremacy, as in the page below.  As McWhorter says in his new essay on Substack, the pamphlet in fact says very little about how to actually teach kids of any ethnicity math, and a lot about how to “decolonize” mathematics. If you don’t believe me, go to the bottom of this post (or to the first link above) and download the pamphlet for yourself.

Here’s one of many examples that will curl the soles of your shoes: an assertion that “showing your work” in math class is an example of white supremacy. As you’ll know if you’ve either learned or taught math, showing your work is essential in correcting errors of thinking and demonstrating how you solved a problem. But your implicit bias is showing, for that idea clearly evinces anti-black racism: 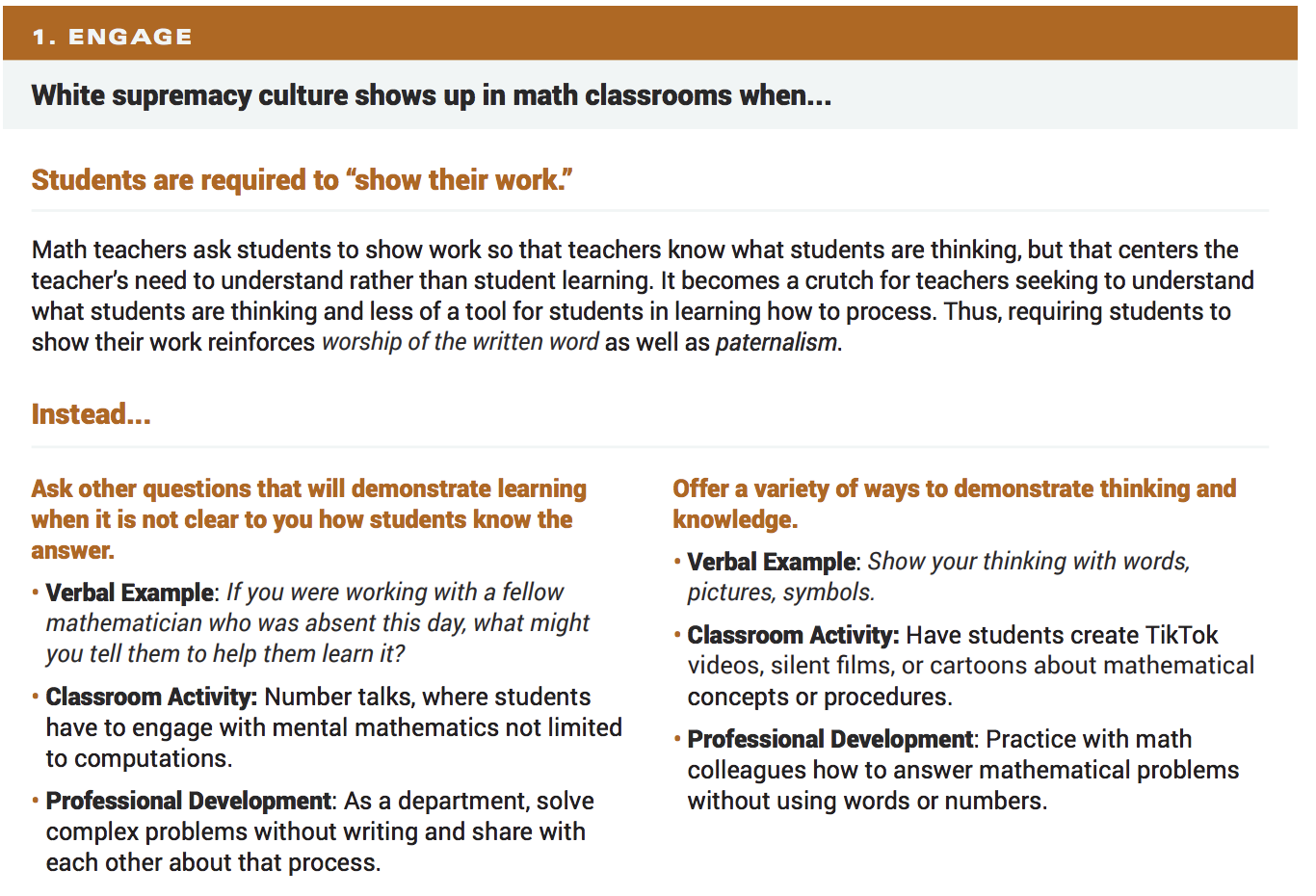 McWhorter’s analysis of this pamphlet is a joy to read if you abhor metastasizing wokeness. It’s free at his site (but subscribe if you keep reading him), and you can read it by clicking on the screenshot below:

A couple of quotes:

. . . this lovely pamphlet is teaching us that it is racist to expect black kids to master the precision of math. To wit – its message, penned by people who consider themselves some of the most morally advanced souls in the history of the human species, is one that Strom Thurmond would have happily taken a swig of whiskey to.

I wish I had written those sentences. McWhorter goes on (his emphasis):

. . . one idea in this fascicle is that black students learn how math has hurt people (i.e. black ones). But it’s no slam dunk that little kids need to be taught this. Wouldn’t this affect a child’s attitude towards mastering the skills? Or – the burden is upon the authors here to explain just why it would not. Sure, teachers imparting this lesson would show that they know racism exists; they will thus Reckon With Racism as we are told they must. But what might the impact of that lesson be on children who haven’t even reached puberty?

More to the point is that this entire document is focused on an idea that making black kids be precise is immoral.

McWhorter disposes of several objections to his objections, and ends by reiterating his idea that antiracism is a religion:

Many will dislike the general flavor of it but, amidst so much we all have to pay attention to, may question just what we must object to specifically about Dismantling Racism in Mathematics Instruction.

There are two things. Racism and religion. Just those.

As in, first it is racism propounded as antiracism. Black kids shouldn’t expected to master the precision of math and should be celebrated for talking around it, gamely approximating its answers and saying why it can be dangerous? This is bigotry right out of Reconstruction, Tulsa, Selma, and Charlottesville.

Second, it is not science but scripture. It claims to be about teaching math while founded on shielding students from the requirement to actually do it. This is unempirical. It does so with an implication that only a moral transgressor numb to some larger point would question the contradiction. This is, as such, a religious document, telling you to accept that Jesus walked on water.

Humans may grievously sacrifice the 9-year-old, the virgin, or the widow upon the pyre in worship of a God. Too, humans may sacrifice the black kid from the work of mastering the gift of math, in favor of showing that they are enlightened enough to understand that her life may be affected by racism and that therefore she should be shielded from anything that is a genuine challenge.

This is not pedagogy; it is preaching.

And in this country, religious propositions have no place in the public square.

Besides the pamphlet over at Equitablemath.org, which is embedded at the bottom and can be read or downloaded using the arrows, you can read about the whole project. And if you go to the “acknowledgments” section of that page, you’ll see this (note the arrow at the bottom). Thanks a lot, Bill and Melinda! Imagine how much Wokeness can be bought with the Gates’s billions! 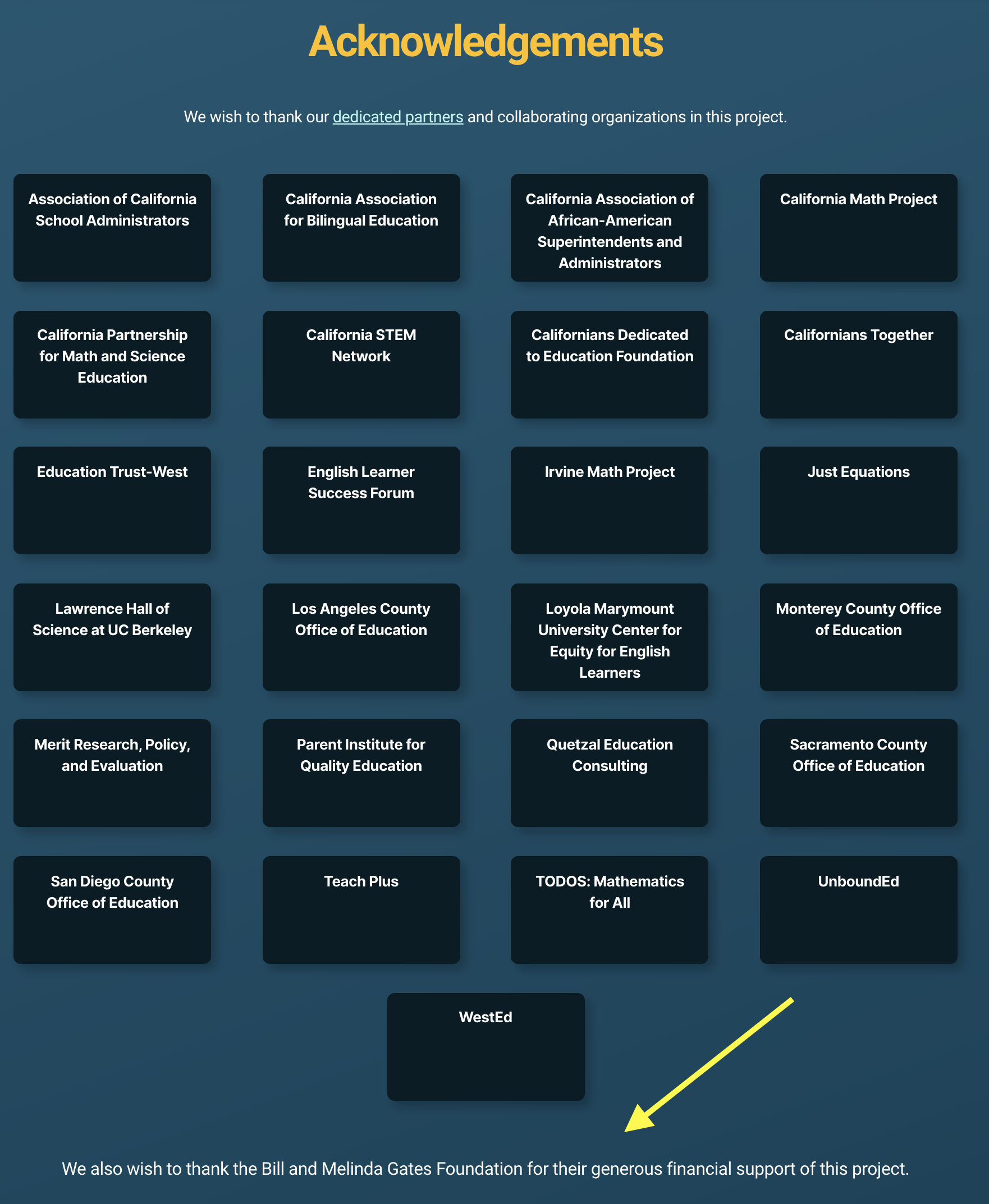