We last heard from reader Lance Emrick five years ago, but he promises to be more regular with his photos. I hope so, as these ones are good, and include WILD FELIDS! (And please send in your own photos.)

Lance’s captions are indented; click on the photos to enlarge them.

Here are some snapshots of the neighbors for Reader Wildlife. We’re at 8600 feet north of Rocky Mountain National Park in Colorado; these are all from within 200’ of the front door, some through the living room windows.

Moose (Alces alces) were reintroduced to the North Platte headwaters area about 40 years ago, and have been very successful. We see them frequently through the Summer and Fall. This fellow is in July velvet: 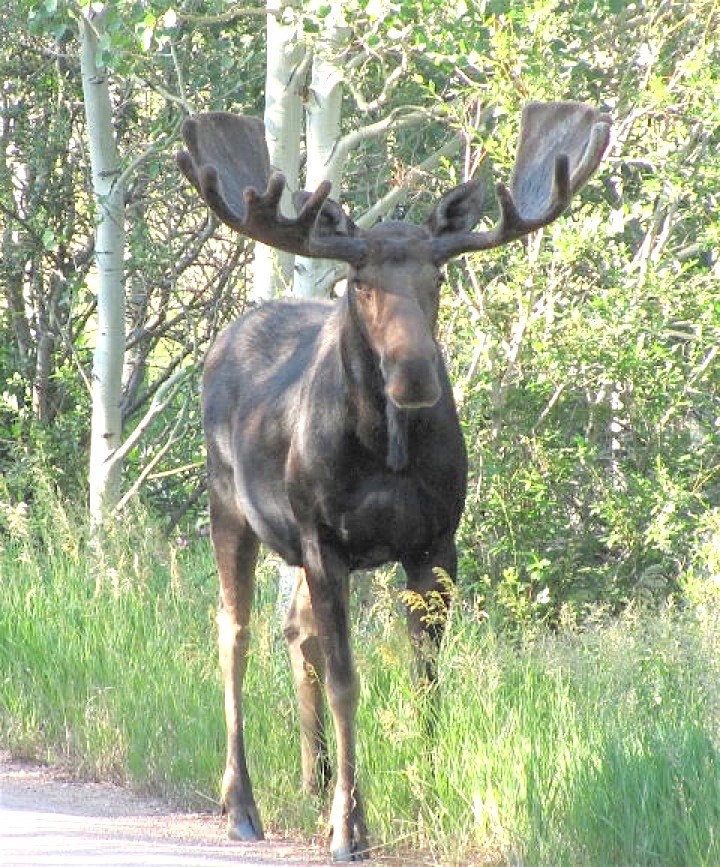 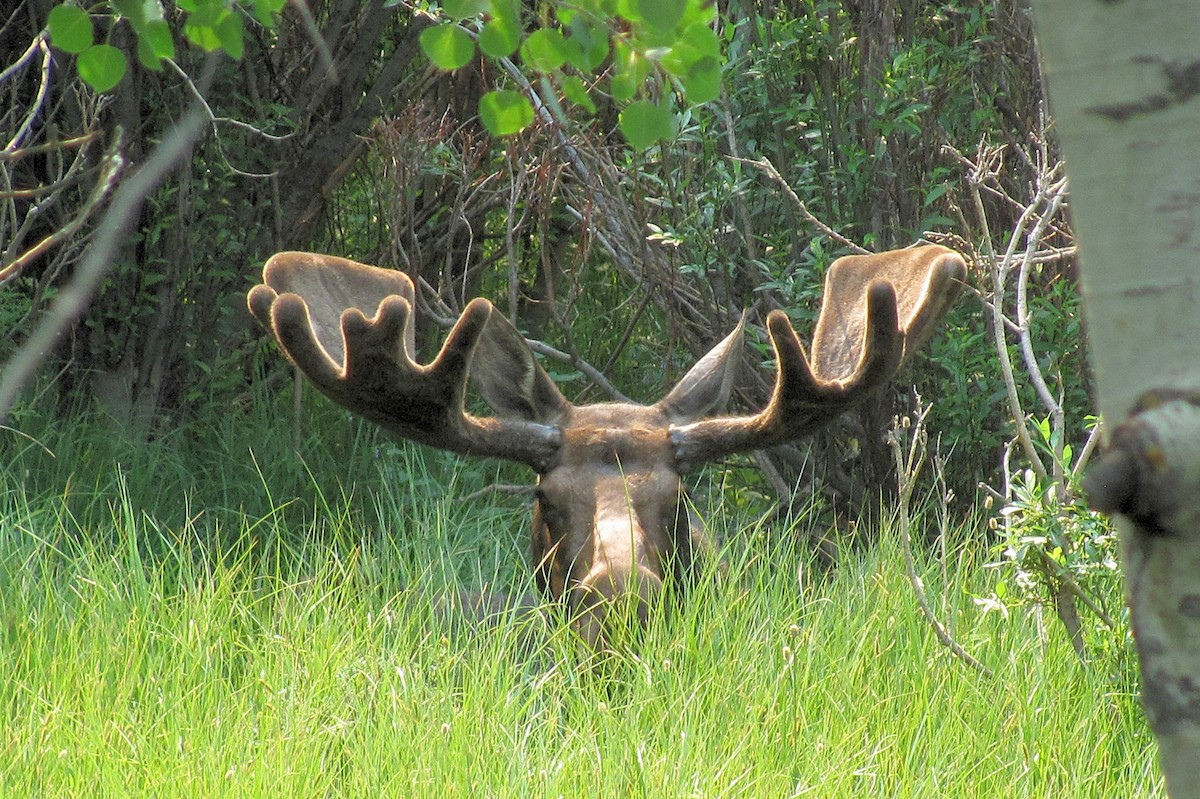 Mule Deer (Odocoileus hemionus) are common and surprisingly casual around us and our noise: 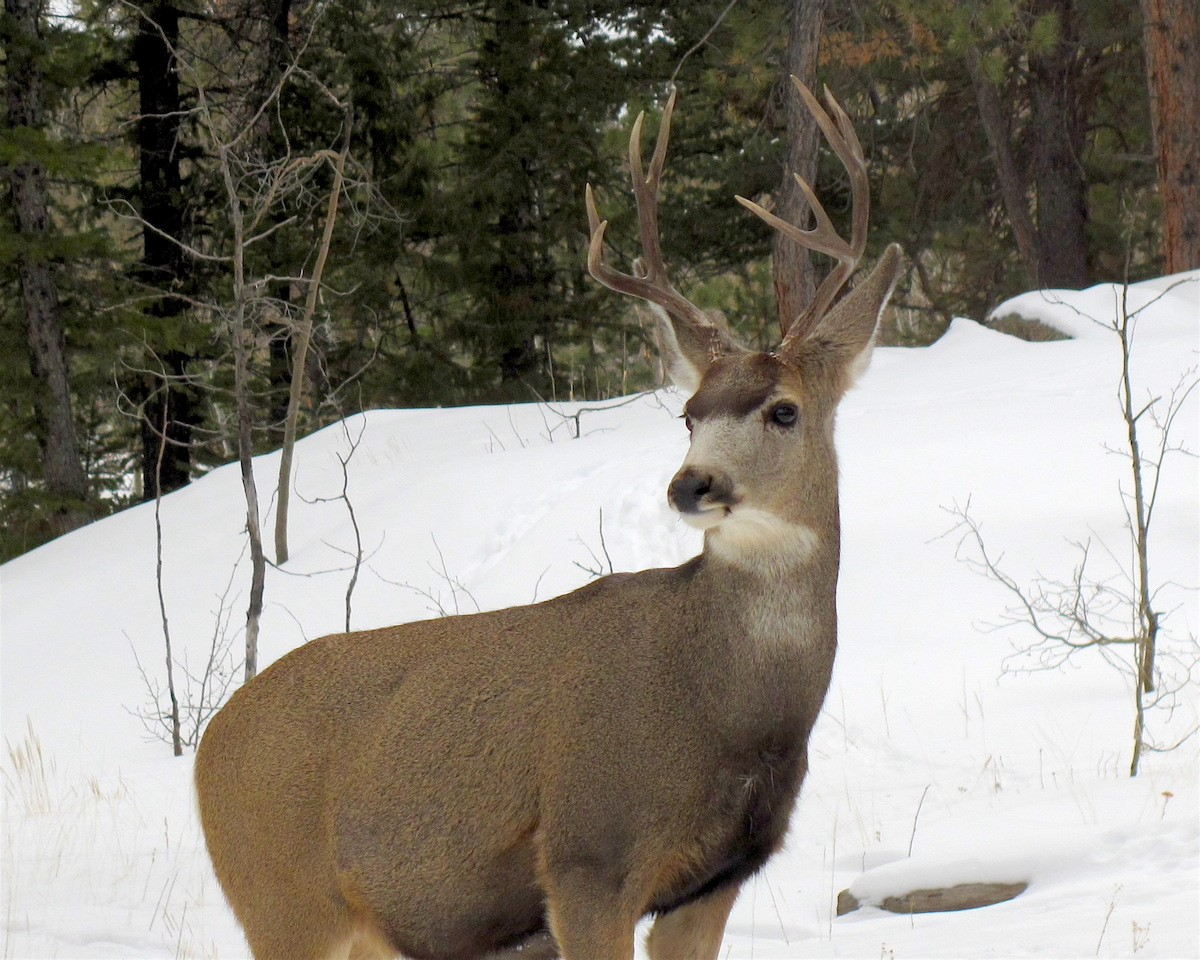 There are a couple of large Elk herds (Cervus canadensis) in the area, but we rarely see them in daylight. The recent wildfires funneled them through our neighborhood more than usual this Fall – night time bugling from the nearby meadow!: 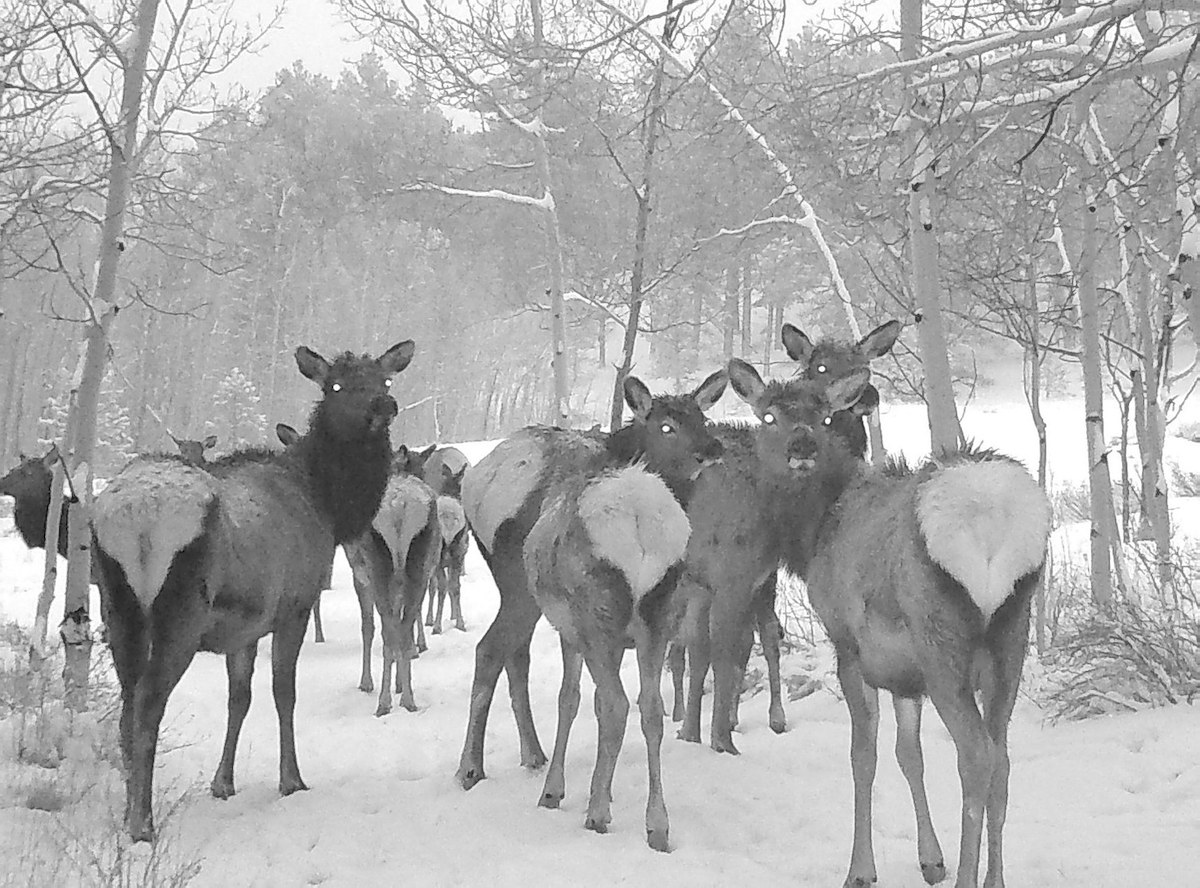 This American Badger (Taxidea taxus) had been digging around in well tailings, giving him this odd coloring: 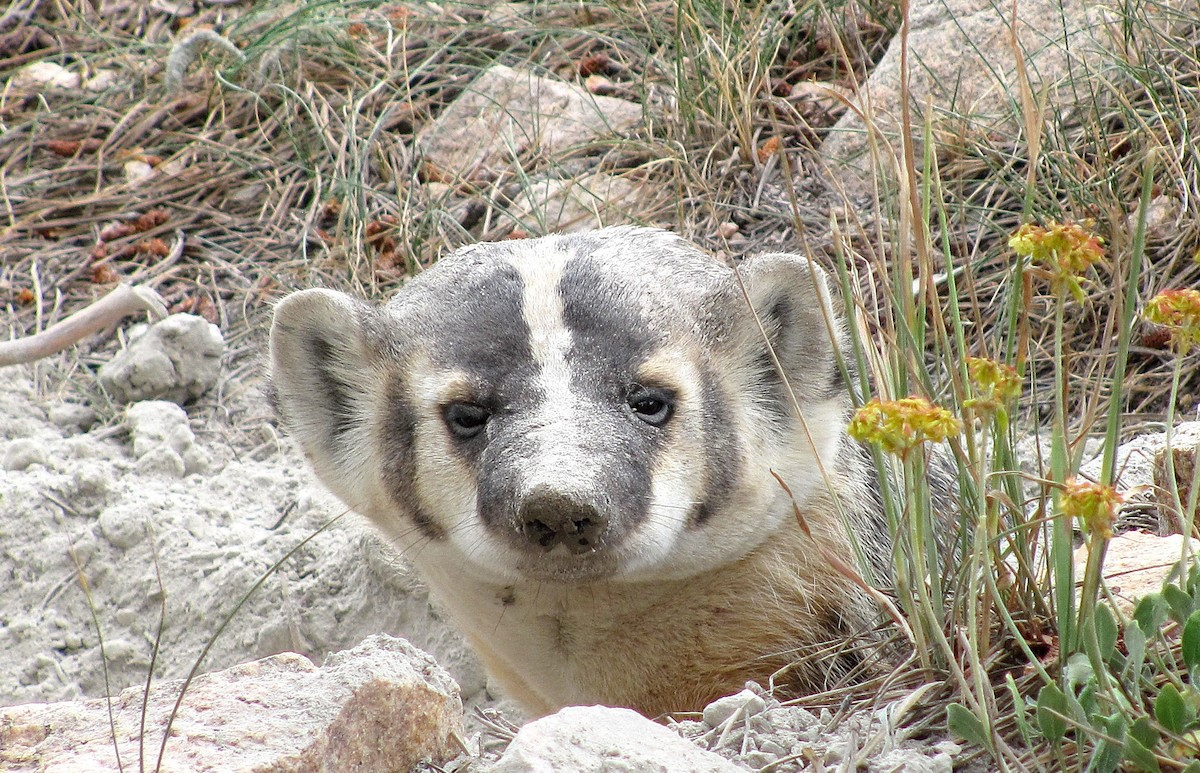 We’ve been here long enough to watch several predator/prey cycles play out, particularly with the Bobcats (Felis rufus). They take over the area when they’re around – looking in windows, hanging out on the deck: 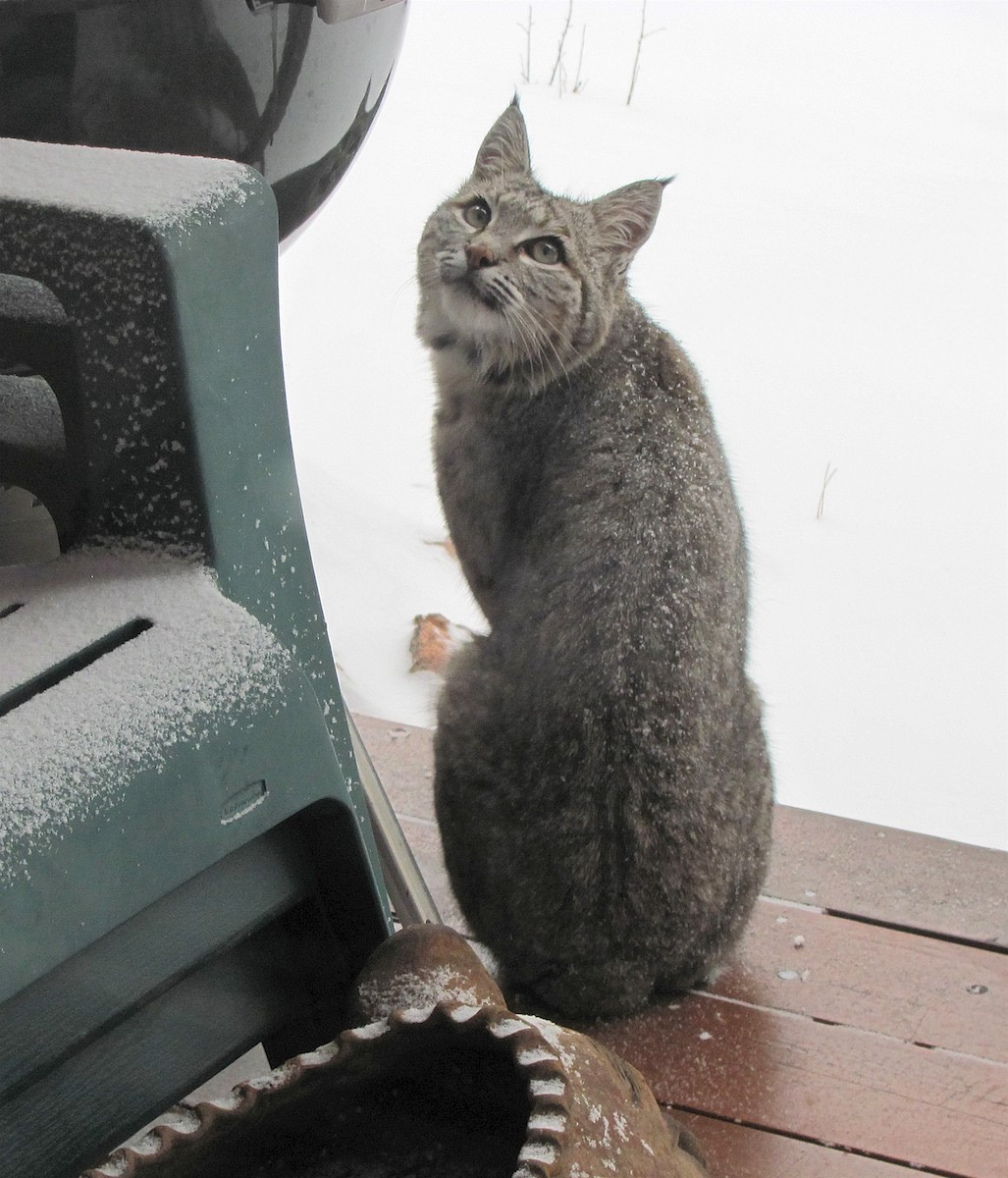 And here waiting for a vole under the bird feeder: 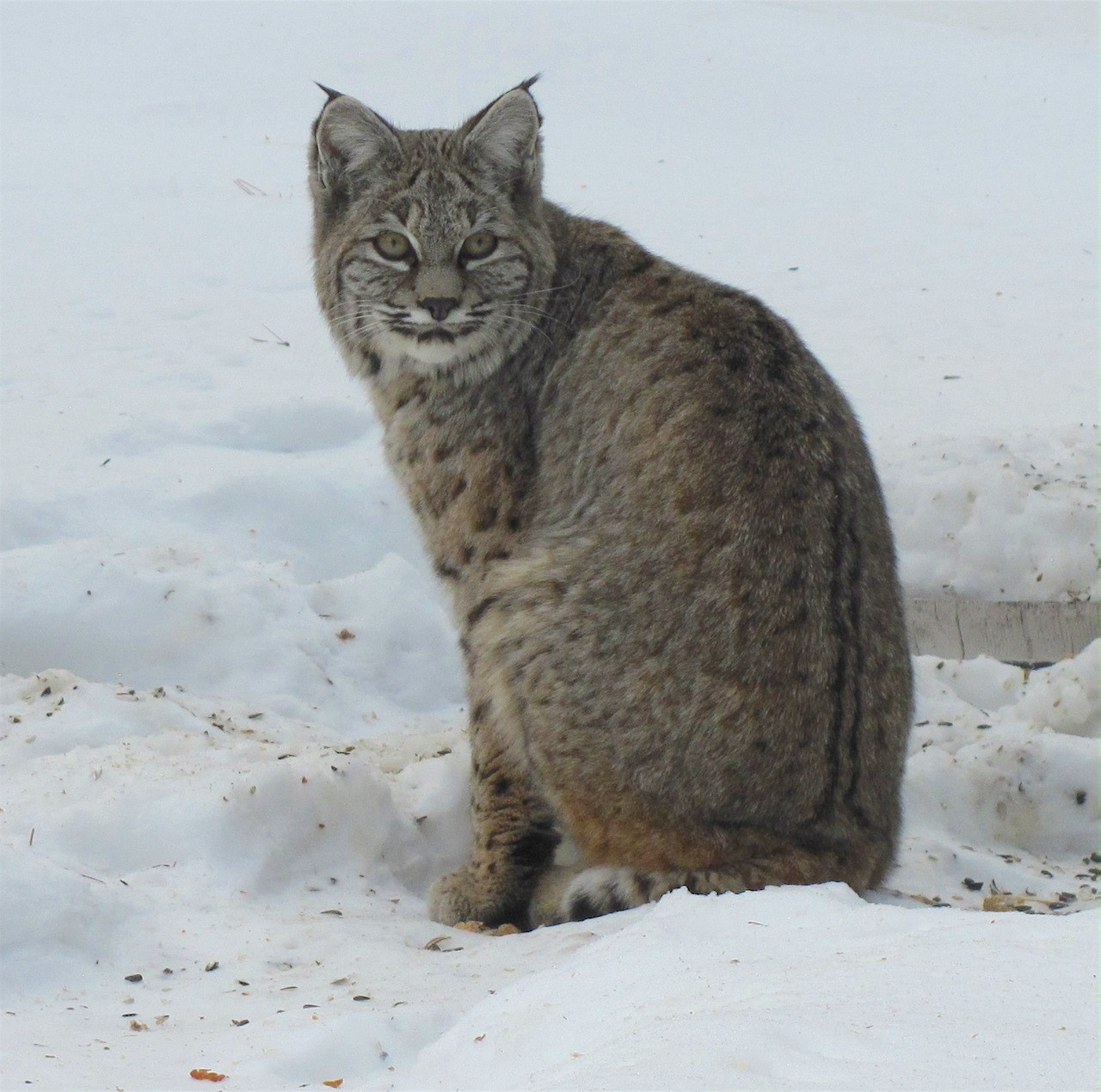 Opposite the cats are the Golden-Mantled Ground Squirrel (Spermophilus lateralis): 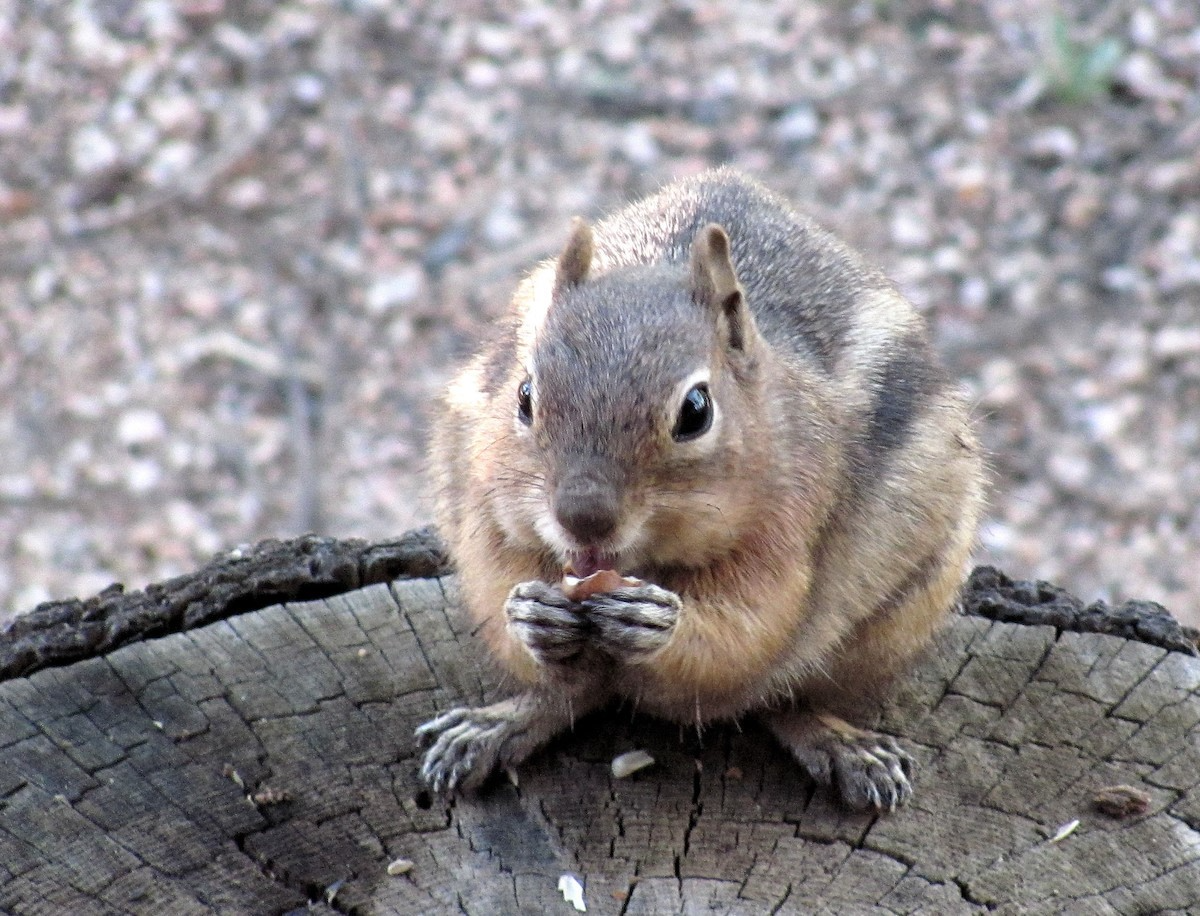 . . .and Mountain Cottontail (Sylvilagus nuttallii) – both with strong comebacks the past couple of years while the cats have been elsewhere: 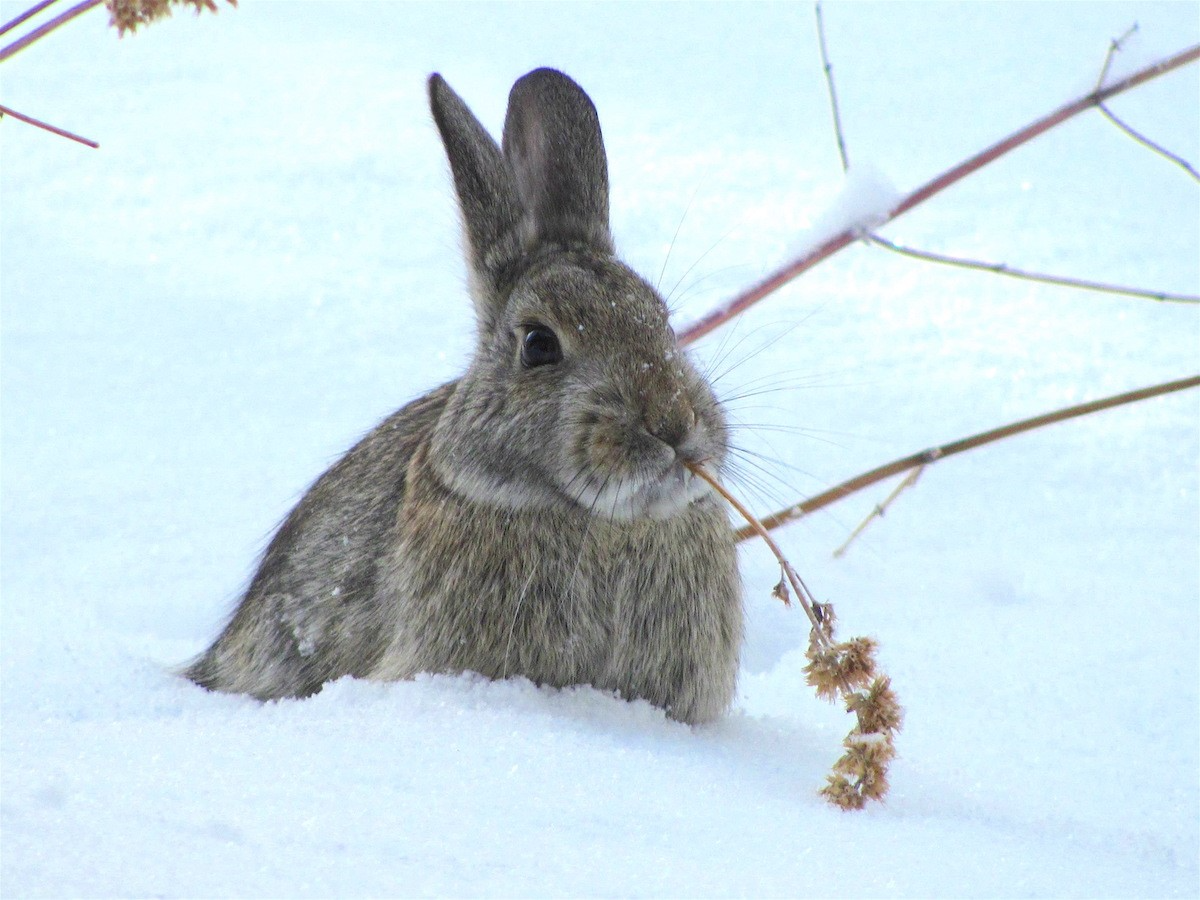 The indoor Shelter fauna have appreciated the current swing of the cycle: 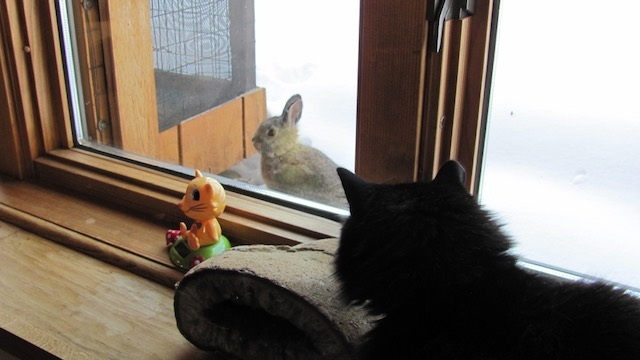 Long-Tailed Weasels (Mustela frenata) will take over prime housing spots from the rabbits and ground squirrels. Around here they still turn pure white with a black tail tip during Winter: 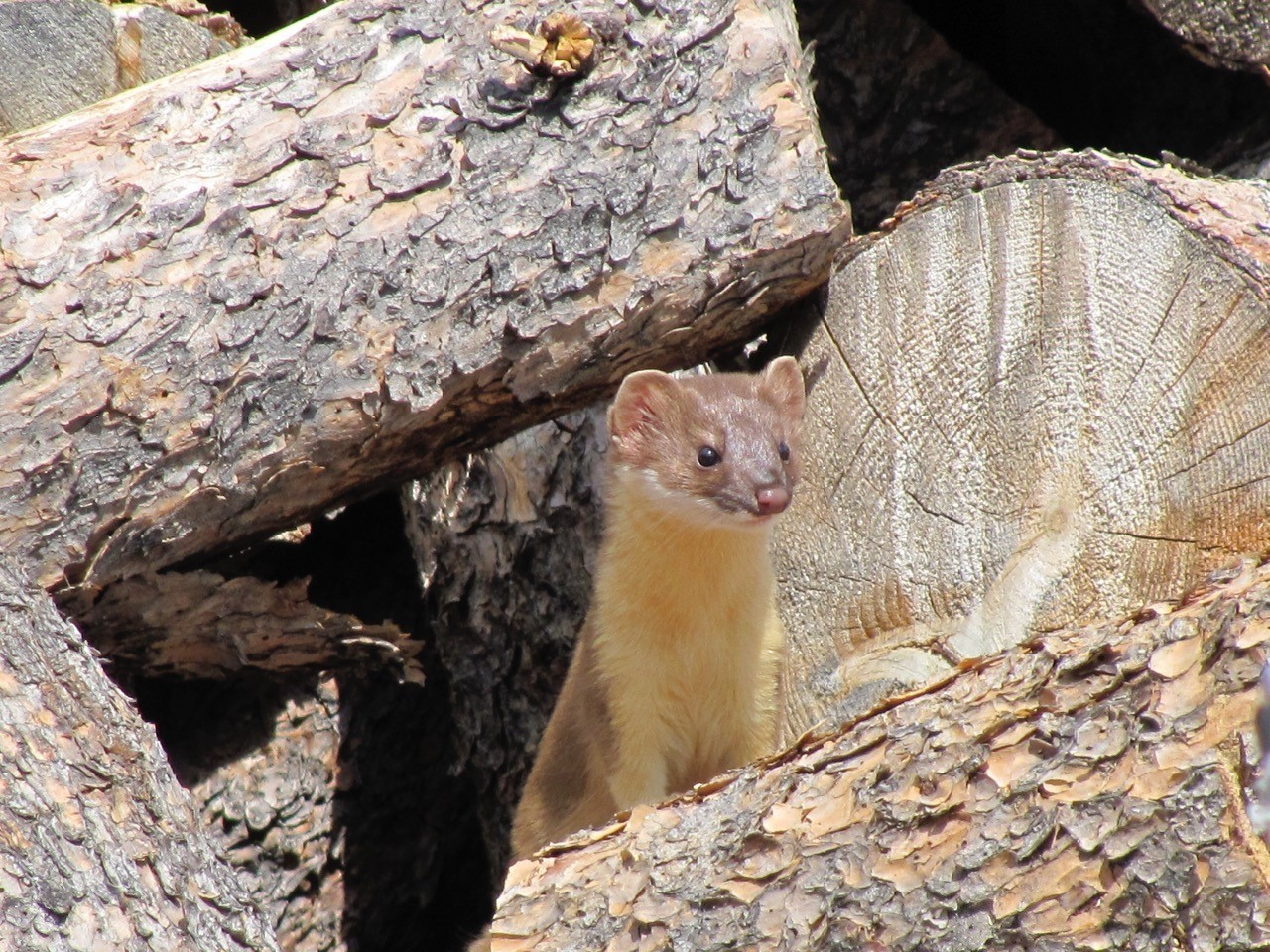 The Wild Turkeys (Meleagris gallopavo) are fascinating to watch, but get really messy and aggressive as the guys get to their most colorful and romantic. I had to try the Parks and Wildlife recommendation of “run around, wave your arms like a big turkey” as a deterrent last Spring: 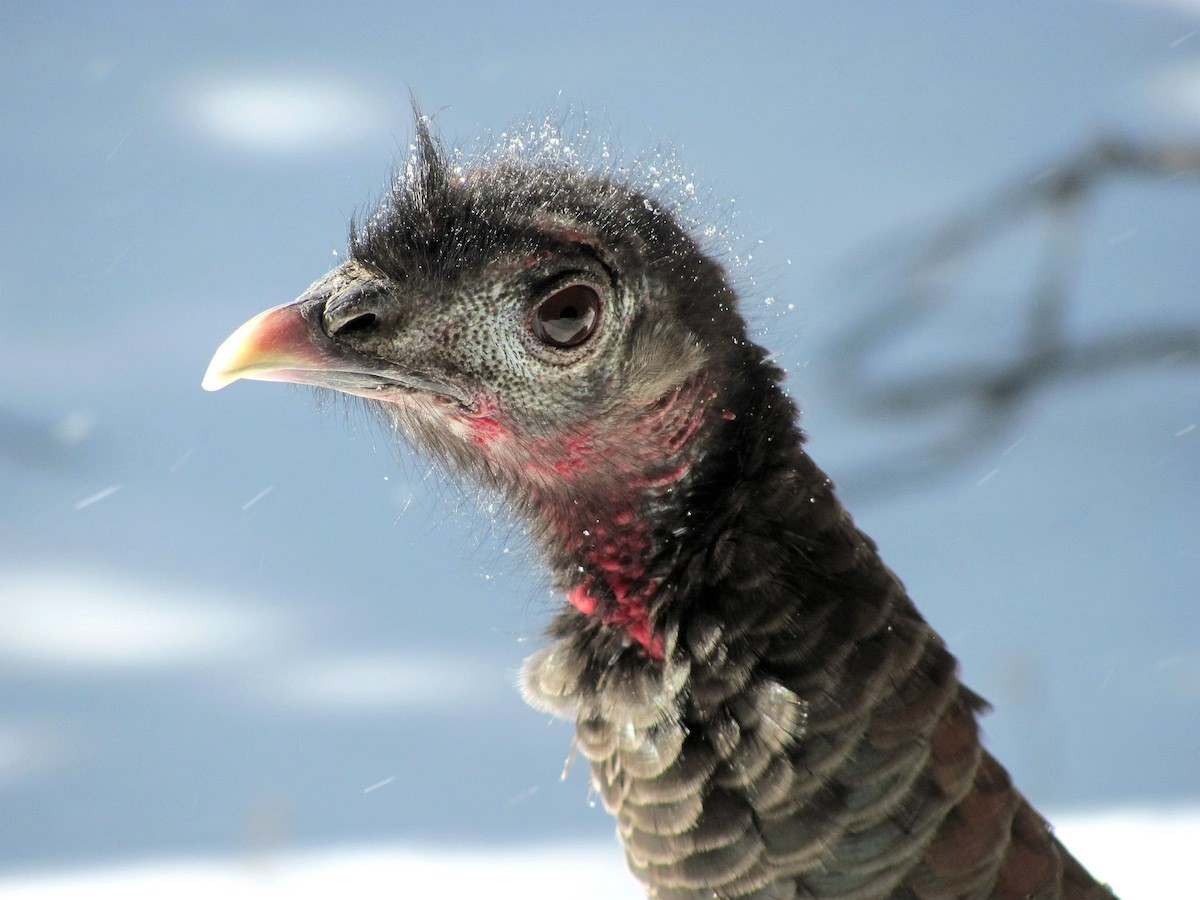 Pine Squirrels (Red Squirrel or Chickaree) (Tamiasciurus hudsonicus) are a busy year-round presence, in this case apparently unconcerned about hawks. [JAC: I’d title this: “This squirrel approves of this post.”] 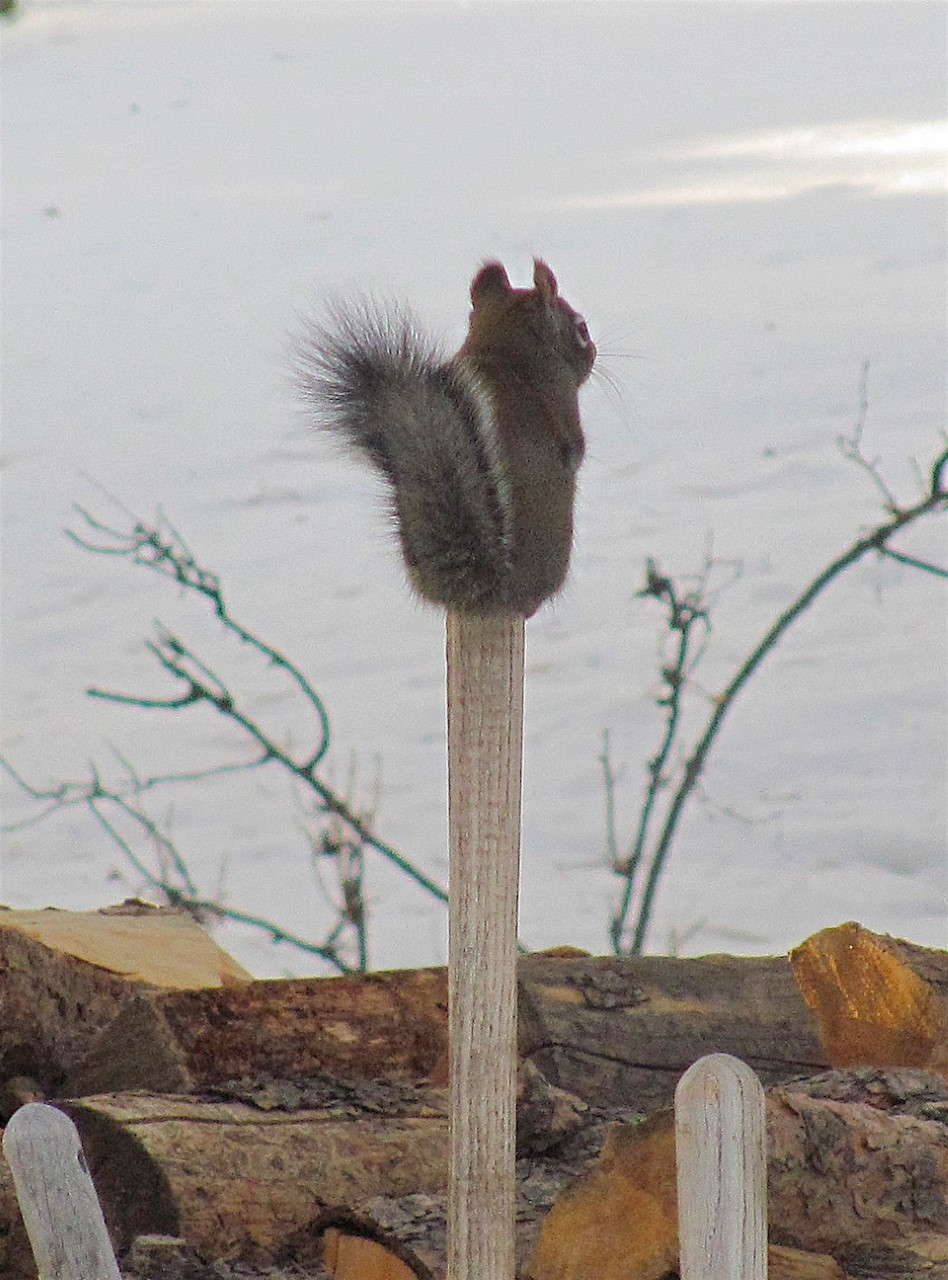