I have mixed feelings about this op-ed in the Washington Post by one of my renowned University of Chicago colleagues, Dr. Shadi Bartsch, the Helen A. Regenstein Distinguished Service Professor of Classics. The article’s title, for one thing, is a bit confusing.  For isn’t it the far Left who is demanding the ditching of the classics, not the far Right? But what Bartsch means is that she won’t allow the far Right to appropriate the classics in the service of white supremacy.

But’s that’s just a quibble that’s quickly resolved when you read her piece. What my issue is with a generally good op-ed is her claim that any text can be read in any way that’s amenable to both the present times and one’s political ideology. In other words, “timeless” texts like the classics can be so malleable that they can be used to teach almost any lesson you want to impart. Click on the screenshot to read: 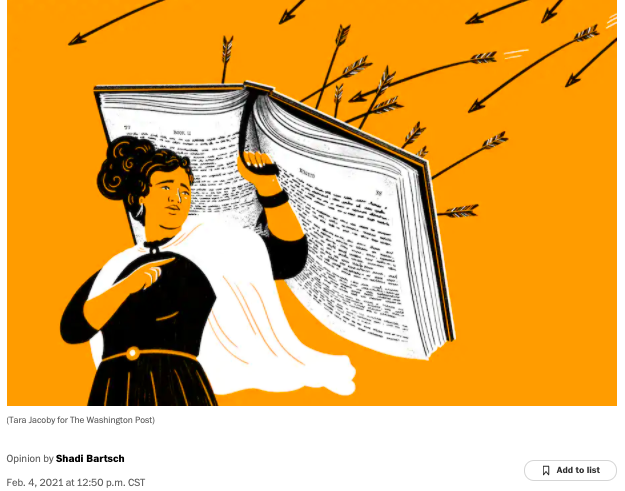 She first describes how the texts have been appropriated by the far Right, and then asks the rhetorical question: isn’t the Left correct in arguing that, given their appropriation by white supremacists, the classics should no longer be taught?

The alt-right has no compunction about appropriating antiquity for its own ends — as can be seen images from the Jan. 6 Capitol invasion, as some rioters wore Greek helmets and carried flags with the phrase “molon labe” (“come and get our weapons”). This distorted reference to the Spartan stand against the Persians at Thermopylae in 480 B.C. reflects the supremacist belief that the Spartans saved “the white race” from barbarians.

I don’t want to throw up my hands and yield ancient history and ancient literature to this group.

Yes, historically, many of these texts have been used to justify and support ideologies and actions we condemn today, from defending slavery to suggesting women are lesser creatures than men. Wouldn’t it be better for us to use texts without tainted legacies and not risk seeming to condone the stories’ content or the history of how the texts were used?

Of course most of us would say “No! We must keep teaching the classics!” Although I’m not an expert on classics, many readers here are, and when we discussed this recently in light of a New York Times article highlighting the classics-dissing of Princeton Professor Dan-el Padilla Peralta, many of you made eloquent arguments why Padilla’s desire to dismantle the field was deeply misguided.  Most important, the claims of the Right that they “own” or can use the classics to buttress white supremacy is bogus. The ancient Greeks and Romans apparently had no concept of “white supremacy”. What they did have a concept of was Greek or Roman supremacy: a form of xenophobia that made their own societies superior to all others, white or not. Roman and Greek slaves were not all people of color; they were mainly people of all colors drawn from those whom these societies had conquered. And we should realize that and teach that. We might not be able to buttress white supremacy with the classics, but we can buttress xenophobia!

Further, as several people pointed out, you can teach the lessons of the classics that are in the classica and redound through the ages—and there are many of these lessons from both philosophy and literature. (Not all literature is sufficiently opaque or ambiguous that you can’t discern its meaning!)

This bleeds into the third reason: Western civilization and the idea of democracy are steeped in classical ideas, and for no reason alone beside history, their study should be retained.

That, of course, demands that we read the classics in a certain way: the way that, we think, the authors intended them to be read. Yes, they’re not all peaches and cream, and we don’t have a perfect idea of “intention”, but you can well apply criticial studies to these texts and trace their legacies over the past two millennia.

Bartsch, however, has a different idea: don’t worry about intention—the basis of “critical studies” or “close reading”, not imposing external ideologies on literature, that transformed English-lit in a salubrious way—but simply try to read the texts in a way amenable to your own times and values.

Wouldn’t it be better for us to use texts without tainted legacies and not risk seeming to condone the stories’ content or the history of how the texts were used?

That approach ignores a basic fact: Times change, and so does the way we read. In antiquity, Virgil’s “The Aeneid,” an epic poem written in 19 B.C. about the foundation of Rome, was understood as praise of the emperor Augustus. In the Middle Ages, readers took it to be an allegory of the life of the Christian everyman. In the 20th century, Italian fascist leader Benito Mussolini put it to use as a foundational text for the third Roman Empire. During the Vietnam War, the poem was interpreted by antiwar readers as a manifesto against imperialism and warmongering

Today, the poem can be read as offensive. A Trojan, Aeneas, claiming to be on a divine mission, attacks the native peoples of Italy and wins, eventually leading to the growth of the Roman Empire. What’s here if not a celebration of the West’s hegemonic history?

But a middle path is available between avoiding such works entirely and endorsing a racist and sexist set of values: namely, interpretation. When I read “The Aeneid,” I don’t see an endorsement of colonization. I find in it what I am primed to find as a politically liberal Westerner in the 21st century. I find problems with its “heroic” protagonist and his search for a homeland: Aeneas causes carnage in his “divine” quest to become king; he even sacrifices people alive. I read the poem as a warning about the power of propaganda to veil the abuse of power.

. . . .Does it matter what the “right” meaning is? No, because literature doesn’t do things by itself. We make meaning with a text, we don’t simply absorb it or somehow get stained by it.

That is why, in his “Pedagogy of the Oppressed,” Brazilian educator Paulo Freire half a century ago suggested that marginalized peoples should reinterpret the same texts that their oppressors use and transform them in their own service. Disconnecting the classics from elite education is entirely possible today: These texts are available in translation to basically anyone with access to the Internet or a library.

What we need to do is “take back the classics.” For millennia, they have been read differently by different cultures. There is no reason they cannot withstand the test of our time, too. We can save the classics, as long as we believe the sins of the father should not be visited upon the sons and daughters.

I think that this is a perilous path to take. Of course different critics will have different interpretations, and yes, you can have a Marxist or a feminist or a Freudian interpretation of Anna Karenina or The Plague, but what does that teach you? It teaches you to stuff everything you read into the Procrustean bed of OUR culture and OUR ideology; in this case, left-wing liberal politics. It lets you see your ideas confirmed over and over again: it is the very embodiment of confirmation bias. And it gives you the misleading impression that all literature was actually written expressing a (sometimes unconscious) ideology.

Finally, if you read some texts trying to “make your own meaning”, you will miss the very meaning the author intended to instill.  If you were, say, a white supremacist making your own meaning from literature, you’d have a hard time turning  Soul on Ice or the first part of The First Next Time into texts supporting white supremacy. “Making your own meaning” covers a multitude of sins, and while it’s interesting to transform ancient works of art into ones seen though a modern filter, like the many “revised” stage versions of Shakespeare, those involve adding your own art to that of the artist’s. There’s no problem with that, of course; the problem is with pretending that that’s what the artist intended.

And with the Greek and Roman classics, if you insist on ignoring the nasty bits, and want to draw a straight line between Plato and Ibram Kendi, you’re going to miss a lot. By all means, take from literature the things you find amenable or consoling or edifying, but I do object to taking out of a work the very same things you put into it.

Sometimes a cigar is just a cigar.