Here are a couple of readings for your weekend delectation. Click on the screenshots to read them. I’ve quoted an excerpt from each, and Sullivan’s piece may be paywalled:

In The Guardian, Adam Rutherford asks us to see Darwin as a man of his time, complex and imperfect by today’s moral lights, but not to be erased or cast aside. I’ve written much of what’s in this column before, but it’s good to see Adam agree. 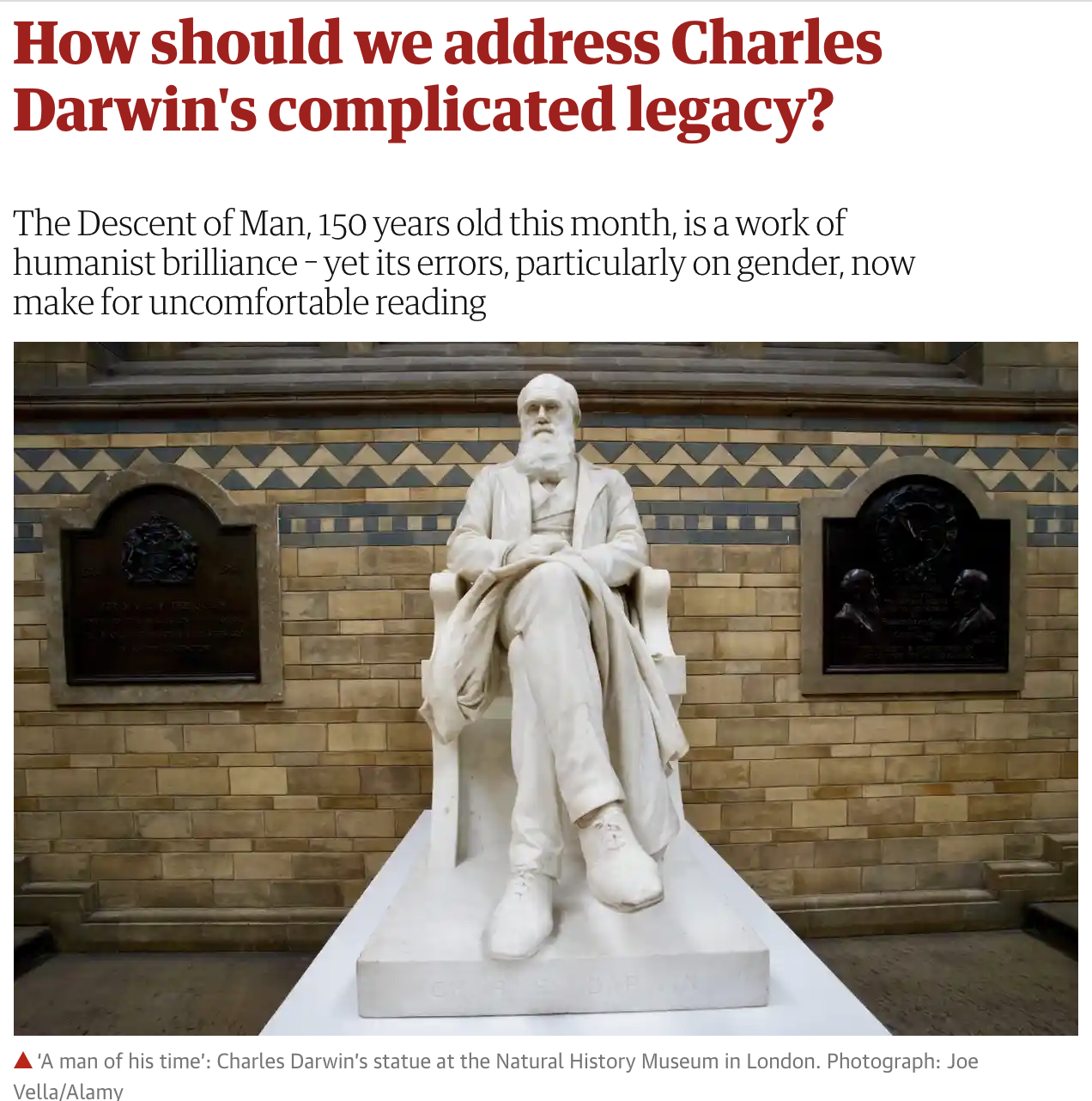 No one sensible is calling for the cancelling of Darwin, though that does not mean that he and his work are exempt from historical reassessment. His descriptions of differences between the sexes and various human populations are well documented and studied, and some of it now makes for uncomfortable reading. He was right about some of the most important ideas anyone ever had, and wrong about others. Unlike the work of Galton, his ideas did not generate policy implications, which, at least in Galton’s case, were enacted around the world for much of the 20th century with genocidal consequences. These distinctions require discussion, scholarship, context and nuance, and above all, they should be intellectually honest.

Who knows what we will be scalded for in 150 years’ time. This is the process of history. Modern debates framed along the spurious lines that we cannot change history, and therefore should cast our statues in aspic, fail to understand that history, by definition, is always changing. It is the past, not history, that is fixed, and the job of historians is to constantly reassess it with new discoveries and new analysis in our current culture.

This is ultimately why The Descent of Man is my favourite Darwin book, because even the greatest of us are merely people – complex and flawed. It is a deeply humanist book. Darwin casts aside the idea that “savage races” are distinct from the civilised, while using language that bears the indelible stamp of imperial dominance. Yet at the same time, he sees that humankind’s strength lies in cooperation, liberalism and kindness. . .

From John McWhorter’s Substack column; “It Bears Mentioning” (free, but you should subscribe):

McWhorter attacks several tropes implying that structural racism is alive, well, and operating today. A sample, with the tropes in italics:

The role of Black labor in building the Southern economic infrastructure has been routinely denied.

Okay, has been – but the use of the perfect here is subtle. Elvis has left the building – it implies that his leaving rings with import here in the present, unlike Elvis left the building. Just who, today, is denying black people’s role here? Which professionals? Which people anyone listens to? Or, if the denial was common coin in the past – which it was – then precisely what do we do with that in the today in which we live?

The contributions that Black scholars have made in the humanities, the life sciences and the natural sciences have been lost because of segregated workplaces.

Have been – okay. But which contributions of this kind are being “lost” today, anymore than, of course, those “lost” by pretty much all scholars, since none but a sliver of scholarship ever really sees the light of day? Would a trawl of the books covered by The New York Times, The Washington Post, The Atlantic and The New Yorker actually reveal a downplaying of important black work?

The work of Black creative artists has been disregarded since it became appropriated into the national cultural apparatus.

Can we really say this especially of America since last spring, when so very much welcome attention has been paid to black art of all kinds? Does the current situation really justify this acrid judgment?

Note that in certain circles, my very posing of these questions – just asking questions – is considered deeply obnoxious, arrogant, inappropriate. That feeling is so deep-seated that you can forget that it isn’t normal.

From Andrew Sullivan’s The Weekly Dish. The title speaks for itself: 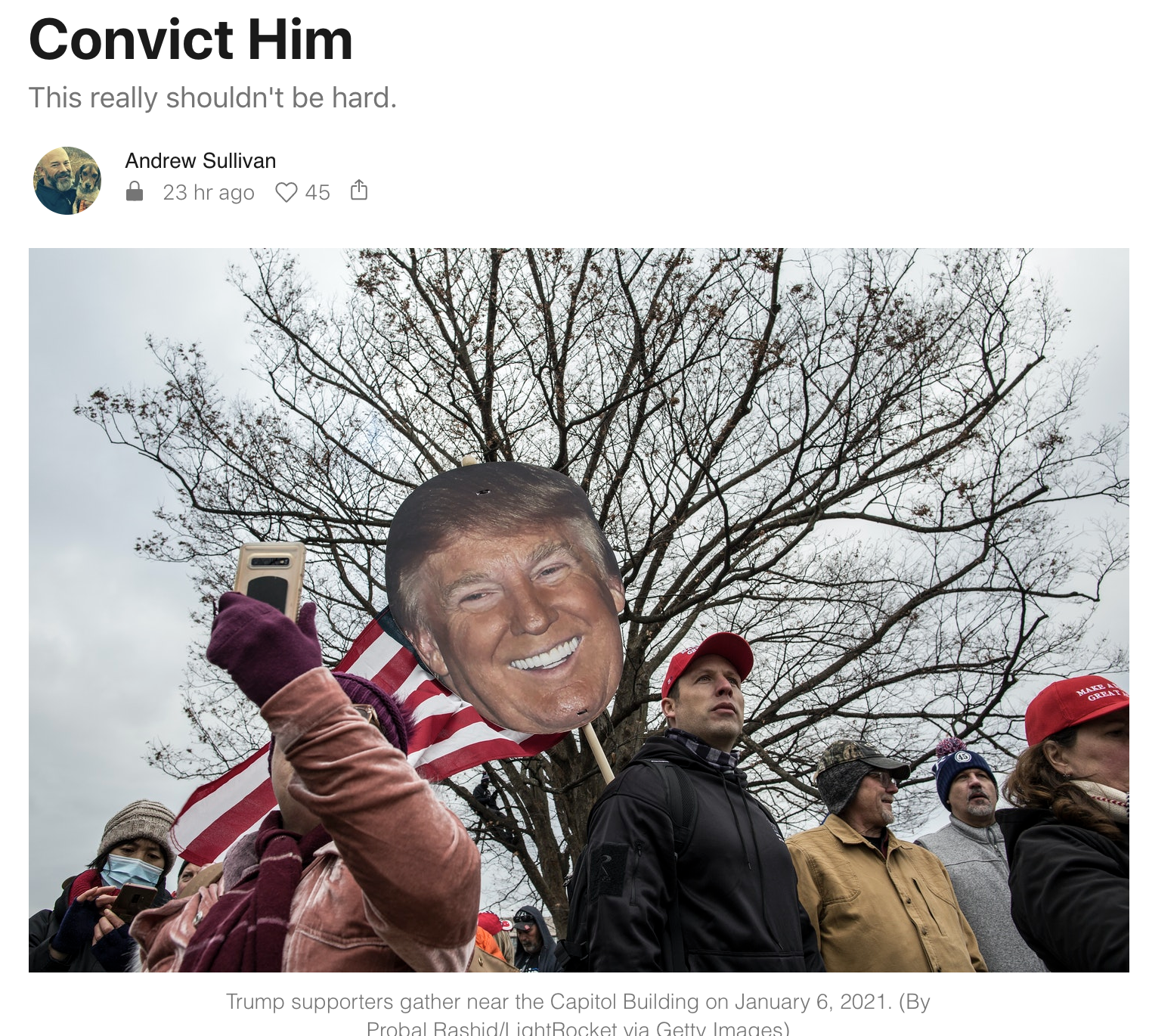 . . . the violence was real and, in several cases, fatal. And no clownishness should distract us from the gravity of the event, or who was responsible for it. For four years, we had a president who expressed contempt for democratic procedures; who had long viewed every US election as rigged; who refused in 2016 and 2020 to respect the results in advance; who claimed millions of illegal aliens had voted for his opponent in 2016; who attempted to stop the counting of votes after election night; who tried to lean on state officials and legislators to reverse certification; who falsely claimed, without any credible evidence, that he had won in a landslide; who wouldn’t attend his successor’s inauguration; and who has refused even now to concede he lost at all.

There has never been a president who has done any of this: express contempt for the democracy he leads, refuse to accept the legitimate results of an election, and attempt to stay in power by marshaling violence in the streets. There are no parallels among any first-world modern democracies for this kind of behavior by a head of state or prime minister. No Western leader, after losing an election, has ever insisted he actually won it in a landslide — and refused to grant any legitimacy to his successor. It is such a grotesque violation of a president’s oath of office that, only a few years ago, it would have been deemed an impossibly far-fetched scenario.

Impeaching and convicting a president for this is therefore a no-brainer. It is the bare minimum we need to do to restore democratic stability. That any Senator is even considering acquitting Trump is a scandal, a sign that one major party has abandoned even the most basic rules of democratic life. That so many “constitutional” Republicans, like Mike Lee of Utah or Rand Paul of Kentucky, have managed to find some arcane way to justify this excrescent assault on our democracy reveals their moral depravity and intellectual incoherence. That so many ordinary Republicans can justify this in any way — and still insist that the election was stolen — is a sign that one party in our system has effectively ceased to be a democratic one at all.

From Wilfred Reilly, a black man, at Spiked. Stuff like this will undoubtedly get him labeled a “self-hating black”. Here he talks about several gaps between blacks and whites—inequities—that are universally ascribed to present racism. Reilly disagrees:

Thirty years ago, economist June O’Neill unpacked a well-known ratio of 82:100 for the earnings of black vs white men. Less technically put, black guys made about 80 cents for each dollar that white guys earned. This gap was – then as now – almost universally attributed to racism. But O’Neill pointed out that simply adjusting for variables like median age, where someone lives and years of education closed the gap substantially.

Adding tested IQ to the equation closed the ratio to 95.5:100, and adjusting for years of work experience (which is closely related to age) closed it to 99.1:100. O’Neill followed up this research in 2005, finding similar results. Controversial as it sounds in our hyper-politicised society, people of different races with the same qualifications succeed to roughly the same degree today. While few would deny that proportionately more black Americans are poor today because of past conflict and oppression, the effect of contemporary racism seems to be in the order of a few percentage points.

Note that he’s talking about contemporary racism, not past racism, whose reality he readily admits. But the solutions to past versus present racist practices may be very different.

And some archaeology. I didn’t know any of this, but geologists have long known that the stones of Stonehengs were quarried in Wales—a long way away. Now there’s increasing evidence, recounted in this article, that the big stones of Stonehenge were actually erected in a similar circular structure in Wales, and the dragged 175 miles (they didn’t have wheels).

As one archaeologist says about The Big Drag from Wales to the present site:

[Dr. Parker Pearson] favors a land route, over which the massive stones, each weighing up to four tons, could be hauled on rows of poles and wooden sledges by as many as 400 people. “This would have been like going to the moon,” he said, “but the Neolithic equivalent.” 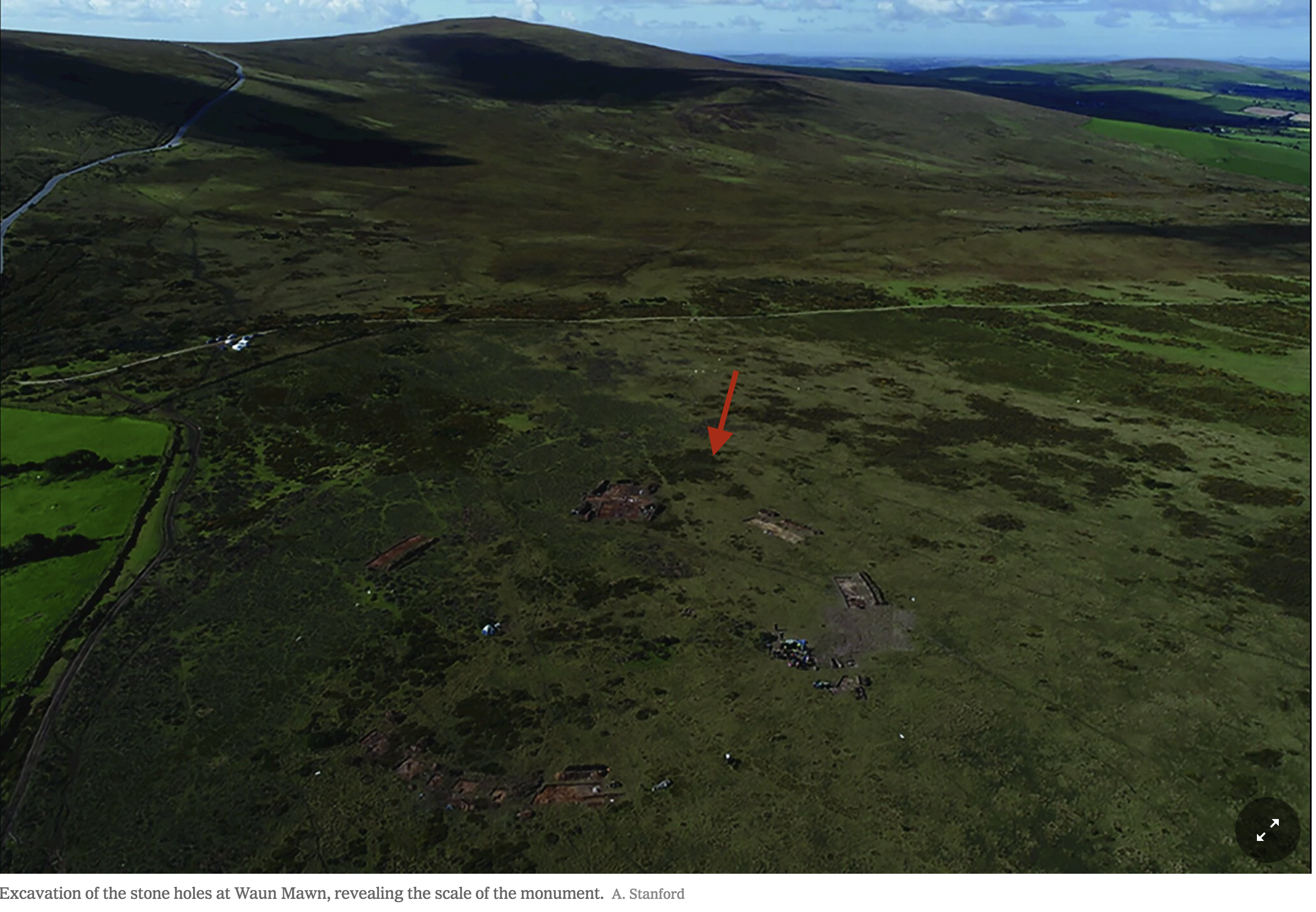