As I have some serious writing to do today, I’ll put up only a few short items which you can consult for yourself.

The first comes from a right-wing site, the Washington Free Beacon, but I have no reason to doubt the reporting. (Besides, left-wing sites aren’t keen to report bad behavior at the New York Times.) What happened is that a schism has occurred in the New York Times newsroom after the firing of long-time science reporter Donald McNeil, Jr.  Somehow the Beacon got hold of a transcript of an online discussion among Times staffers, and it seems that they’re not unified in damning McNeil. There’s a clear dichotomy between those who wanted McNeil fired (the woke) and those who ask for forgiveness for what, after all, was not a reprehensible and unforgivable act (the reasonable staff). What McNeil did was utter the “n-word”—not as a racial slur but in the following context:

McNeil’s ouster came nearly two years after the incident that precipitated it. While chaperoning high school students on a pricey trip to Peru, the science reporter responded to a question from a student about whether one of her classmates should have been suspended for using the n-word. In the process, he [McNeil] uttered the offending syllables himself. An internal Times investigation found his judgment wanting but stopped short of firing him.

Only after the Daily Beast published an account of the incident, thrusting it into the public realm for the first time, was McNeil pushed out. “We do not tolerate racist language regardless of intent,” Dean Baquet, the paper’s executive editor, told staff in an email.

McNeil’s resignation on Friday—and Baquet’s post hoc explanation that intent doesn’t matter—renewed the bitter debate among staff, with reporters warring with each other in public and private.

You can read about this tempest by clicking on the screenshot: 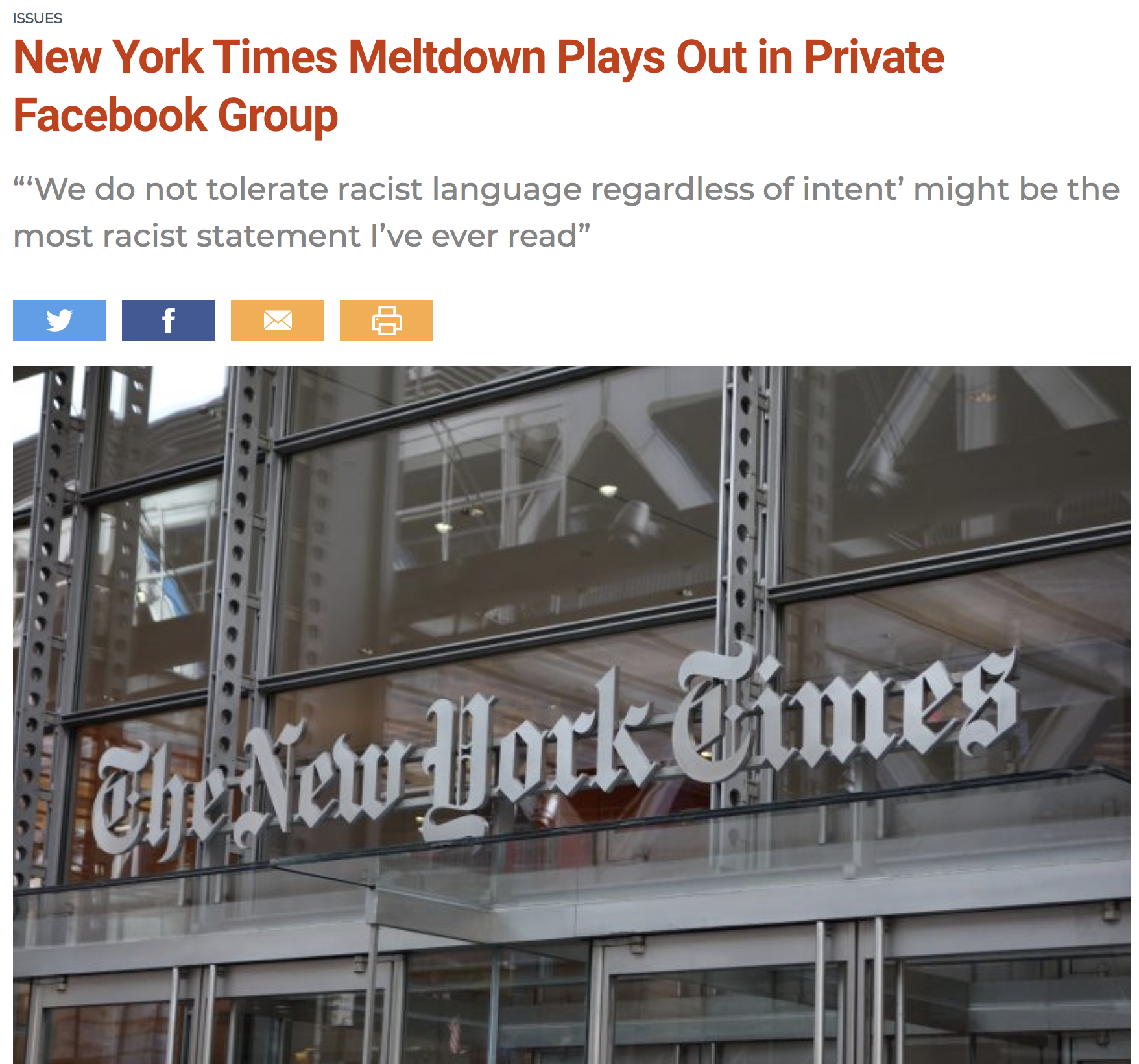 There are a few juicy tidbits in the NYT debate; I recount them with some Schadenfreude but also to show you that there are some decent folks still on the staff, even if the paper’s editors, including executive editor Dean Baquet, are craven invertebrates, lacking self-respect and truckling to the staff and the social-media mobs.

“What ever happened to the notion of worker solidarity … to giving a fellow worker the benefit of the doubt,” asked Steven Greenhouse, who spent three decades covering labor issues for the Times. “And why didn’t the NewsGuild do far more to defend and protect the job of a long-time Times employee, one who at times did tireless, heroic work on behalf of the Guild to help improve pay and conditions for all NYT employees?” McNeil had excoriated management’s attempts to freeze pension plans in 2012, calling those involved “belligerent idiots.”

Times crossword columnist Deb Amlen accused Greenhouse of an excessive focus on the “perpetrator,” arguing that he and others should shift their attention to the people McNeil had “harmed.”

“Why is it that the focus in discussions like this almost always [is] on ruining the perpetrator’s life, and not those who were harmed by [his actions],” she asked. Reached for comment, Amlen told the Free Beacon this is a “private group” and that she would “appreciate it if you do not use anything I said or wrote.”

Despite Deb Amlen’s claim, I would deny that McNeil “harmed” anyone. Offended, maybe—though surely a lot of the “offense” among the 150 Times staffers who called for McNeil’s head was exaggerated—but nobody was harmed. “Harm” is the histrionic synonym for “offended” that the woke use to make themselves look like victims as well as to leverage power.

And remember the contention of the staffers, later adopted by the NYT editors, that “intent doesn’t matter” when you use a word like the n-word?

A Times spokeswoman muddied the waters further on Sunday, telling the Free Beacon that racial epithets had no place “in the newspaper.” The paper printed the same epithet as recently as last week in a magazine profile of the Princeton classics professor Dan-el Padilla Peralta.

“Even in ironic or self-mocking quotations about a speaker’s own group (in rap lyrics, for example), their use erodes the worthy inhibition against brutality in public discourse,” Danielle Rhoades Ha told the Free Beacon. She declined to say if that policy extends to social media, where other New York Times writers, including Nikole Hannah-Jones and Astead Herndon, have quoted the slur.

Baquet’s statement in particular came in for scathing criticism in the Facebook discussion. “‘We do not tolerate racist language regardless of intent’ might be the most racist statement I’ve ever read,” said Lawrence De Maria, an award-winning crime and finance reporter. “It demeans ALL races.”

It is also untrue: “Larry Wilmore did not say, ‘You did it, my nigger,’” Hannah-Jones wrote in 2016, referencing the black comedian’s routine at the White House Correspondents’ Dinner. There is a “linguistic difference b/w nigger and nigga.”

Then Hannah-Jones did something that nobody, much less journalists, should do:

The Washington Free Beacon asked Hannah-Jones whether intent made a difference in her case. She responded by posting this reporter’s inquiry, including his cell phone number, on Twitter, in direct violation of the website’s terms of service.

What was Hannah-Jones thinking? But I’ve always seen her as a nasty piece of work, thin-skinned and unable to accept criticism.

Truly, this is just one of several incidents (including the bullying of Bari Weiss and the dumping of op-ed editor James Bennet) that makes the New York Times look like a bunch of elementary-school kids fighting at the playground and tattling on each other. Does the paper, at long last, have no pride at all in its reputation? Will Dean Baquet step up and start leading the paper out of the mucky hinterlands it’s entered? I’d hope so, but don’t expect so.

The lack of clear standards has generated frustration internally. “I don’t think anybody feels like we have any clarity about what happened with that incident or other alleged incidents,” one New York Times reporter told the Free Beacon. “[W]e demand transparency of other people, and we don’t have it in our own processes.”

It has also raised questions about who really edits the paper: Baquet or the radicals who work for him. “Dean and AG [Sulzberger] make a decision, and then are bullied by a vocal minority into changing their minds,” Times contributor Robert Worth said in the Facebook group. “This is not the NYT I know.”

I expect that Robert Worth will soon find himself looking for a new job.

In the meantime, PEN America has had the backbone to criticize the paper for how it handled McNeil:

Part of a statement from PEN America CEO Suzanne Nossel:

For reporter Donald McNeil to end his long career, apparently as a result of a single word, risks sending a chilling message. That the paper apparently altered its course in relation to this incident as a result of public pressure is a further worrying signal. The Times‘ readers depend upon its journalists and editors to be able to carry out their work without fear that a lone errant statement may cost them their job.”

29 thoughts on “Short take: “Meltdown” at the New York Times”