I was much relieved when the ducks left the pond after it began icing over, but I’ll be damned if the curséd fowl haven’t returned. They’re not here every day, and I have no idea where they go, but two or three pair seem to drop by every few days. And, softy that I am, when I see them I hie myself down to the pond with two containers: one of “scratch grain” (corn, seeds, and grains), and the other of high-class Mazuri duck chow. They’re always hungry, too, which would make me feel guilty if I didn’t feed them.

First, though, some winter scenes at Botany Pond:

The pond is very placid and quiet after a snowfall. Ice has formed everywhere except at the fresh-water inlet and at the two bubblers that oxygenate the water. There is little open water and no natural food, ergo no ducks: 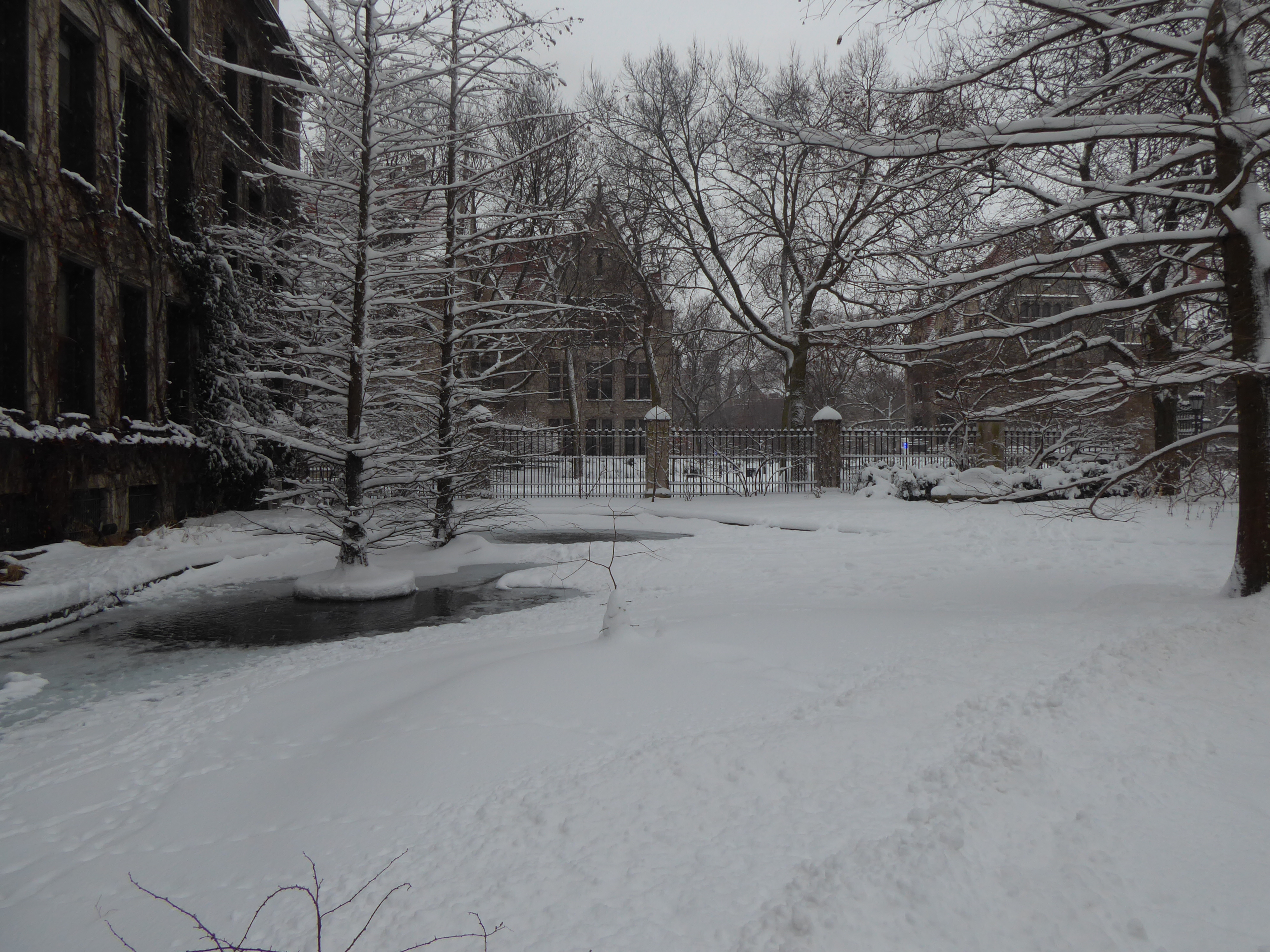 The students are quite good at making snowmen (snow people?). Here’s a good one; it even has a fishing pole. 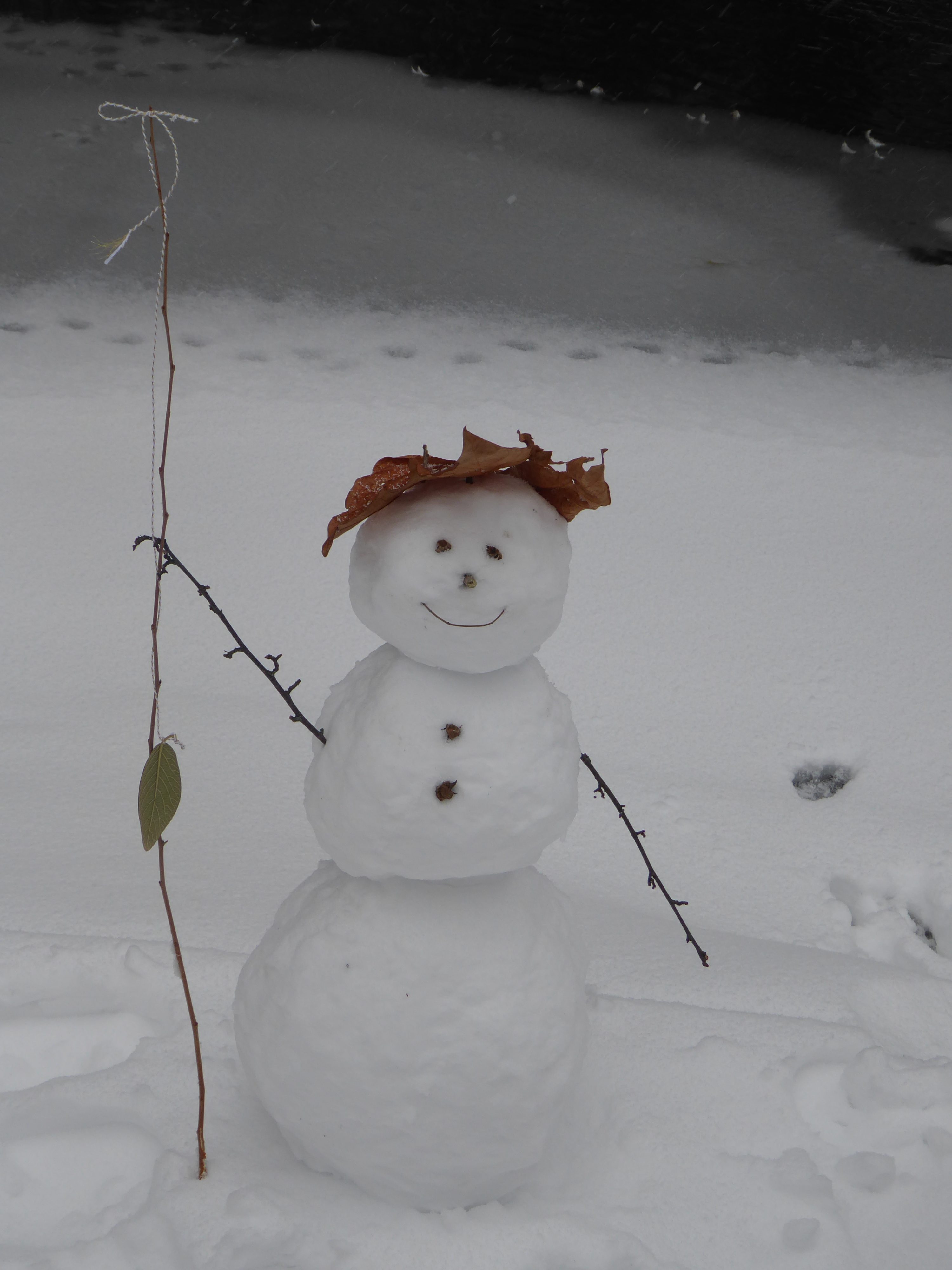 Then someone put two ducks on its head: a big one pecking the snowperson’s head and a smaller one on top of that. There are also tiny ducks at the base: 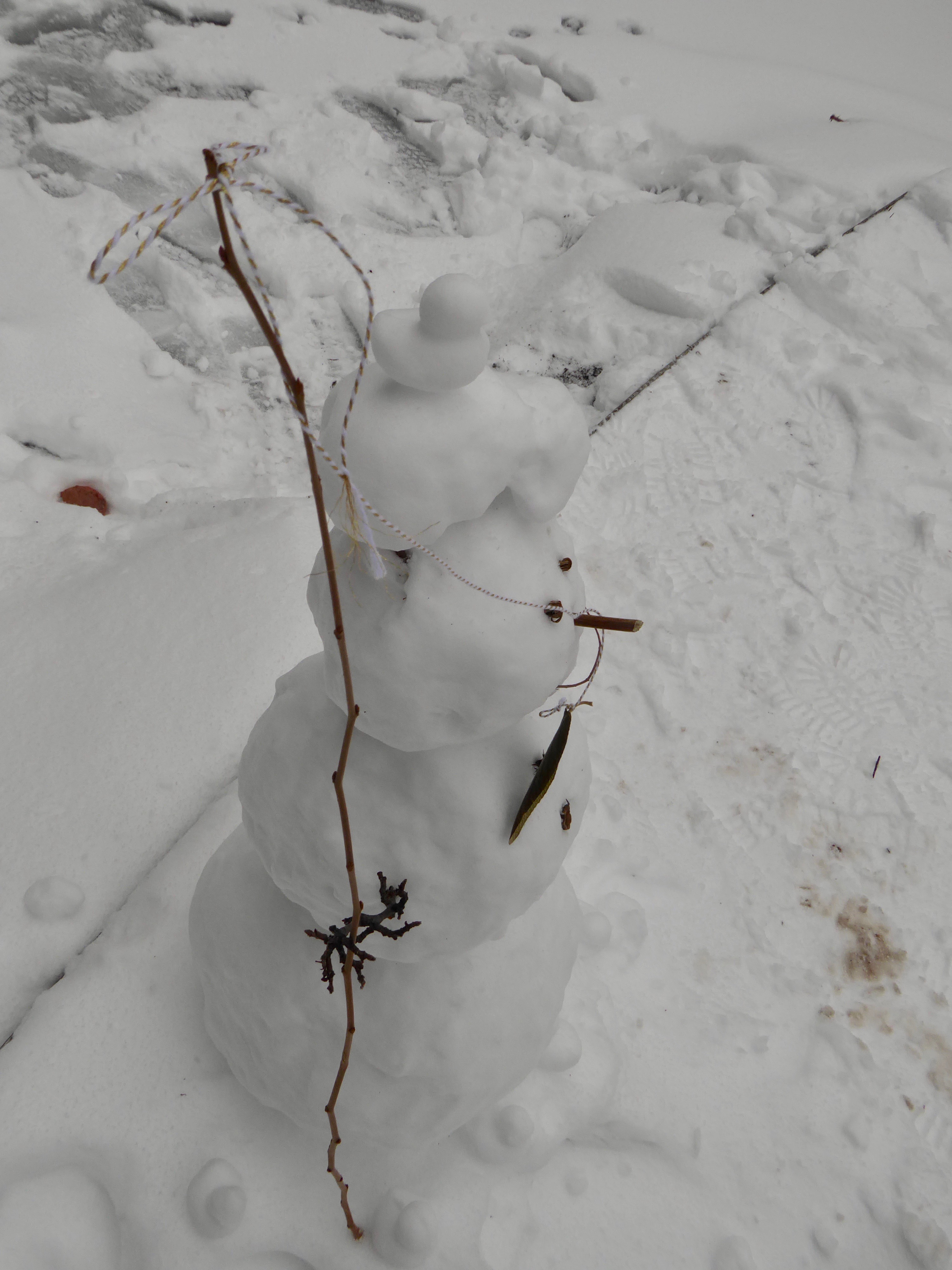 Duck tracks in the snow tell us that waterfowl have been here: 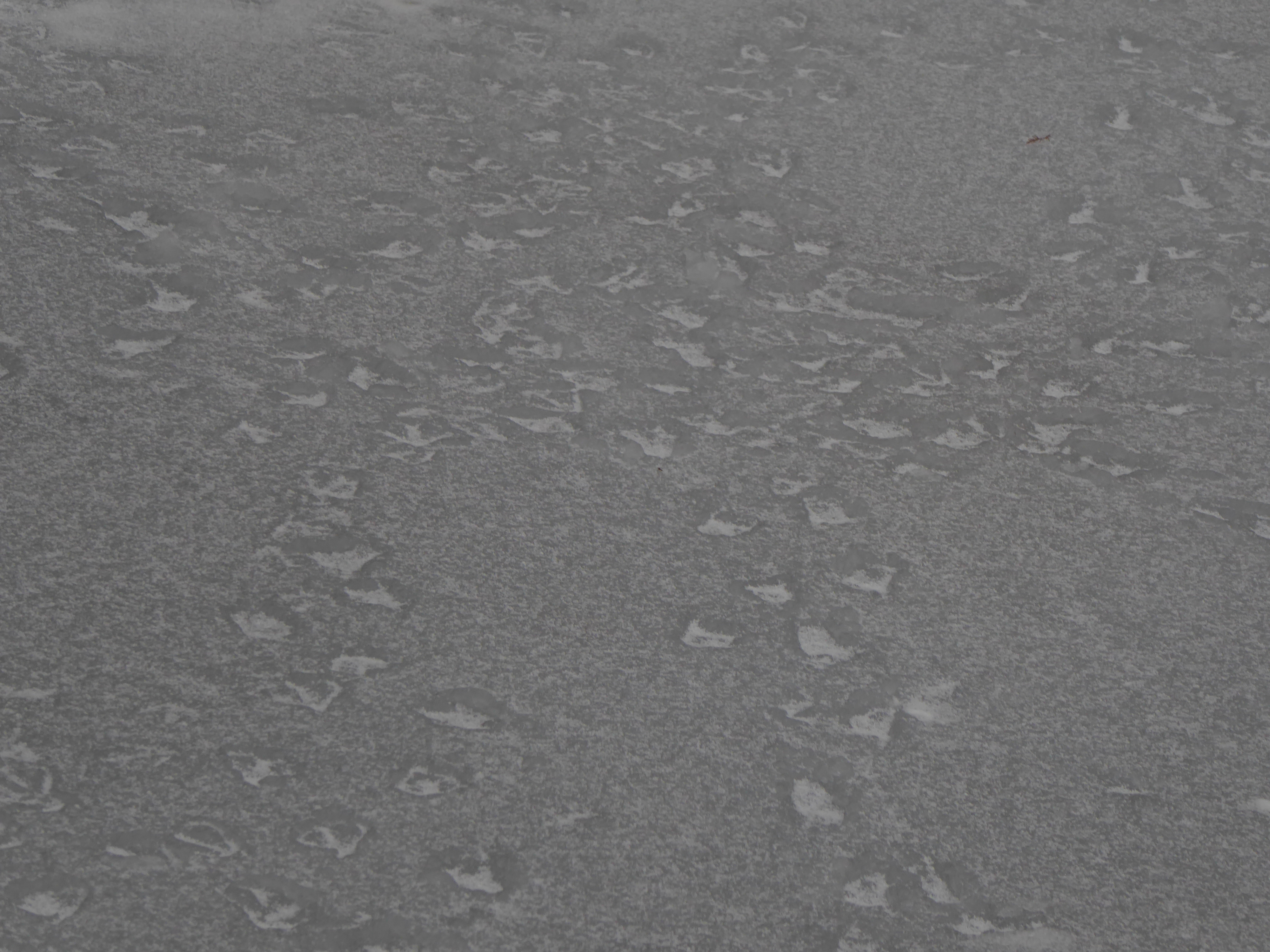 But wait! A pair showed up late this morning! 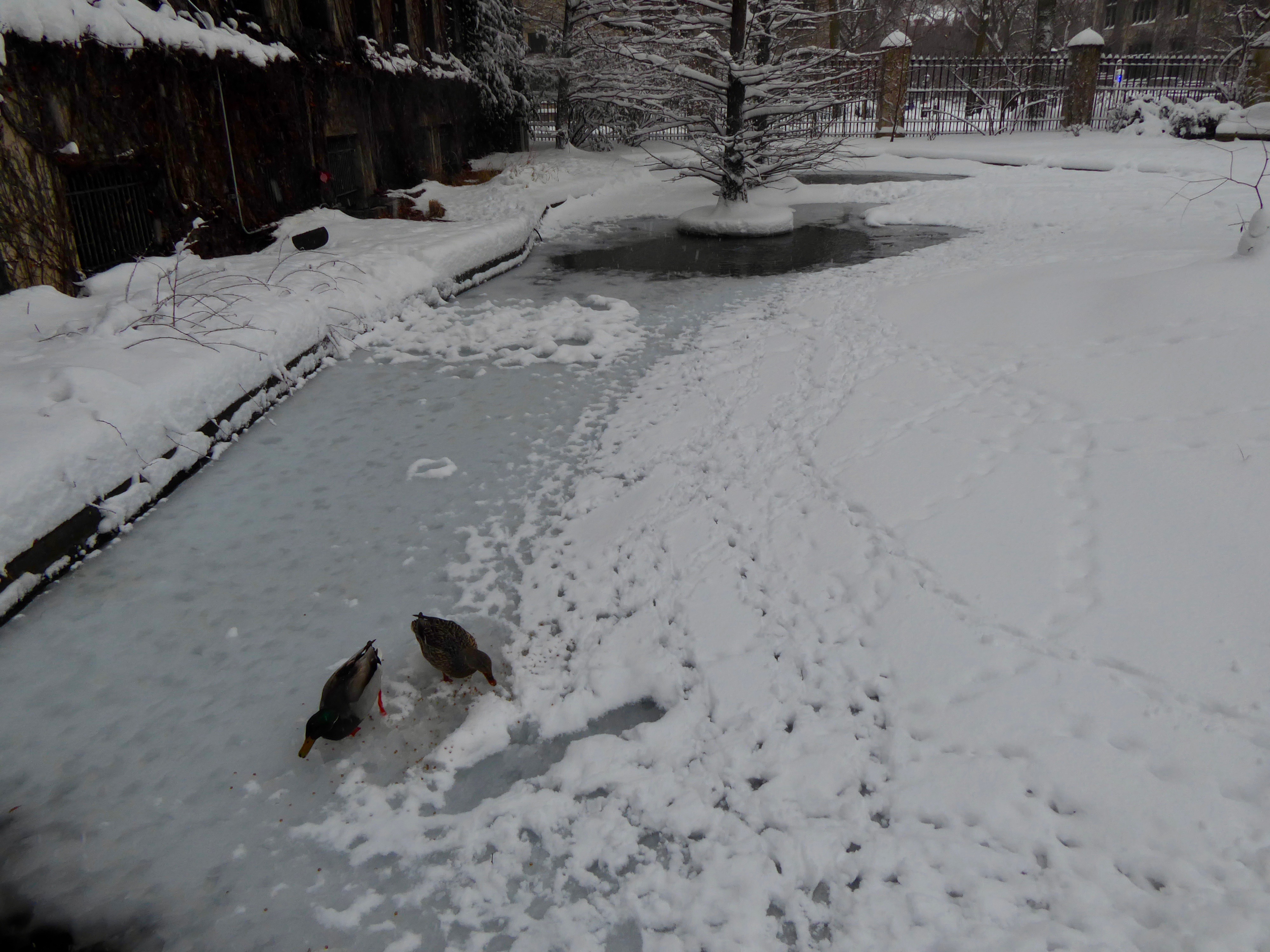 The hen and drake were familiar to me, as the hen has been here several times. She has a distinctive ribbon of dark coloration going horizontally across her bill. And of course she has her handsome swain. They could be Yuri and Lara (named from “Dr. Zhivago”), but I can’t find my last post asking readers to suggest names.  They got lost of scratch grain: 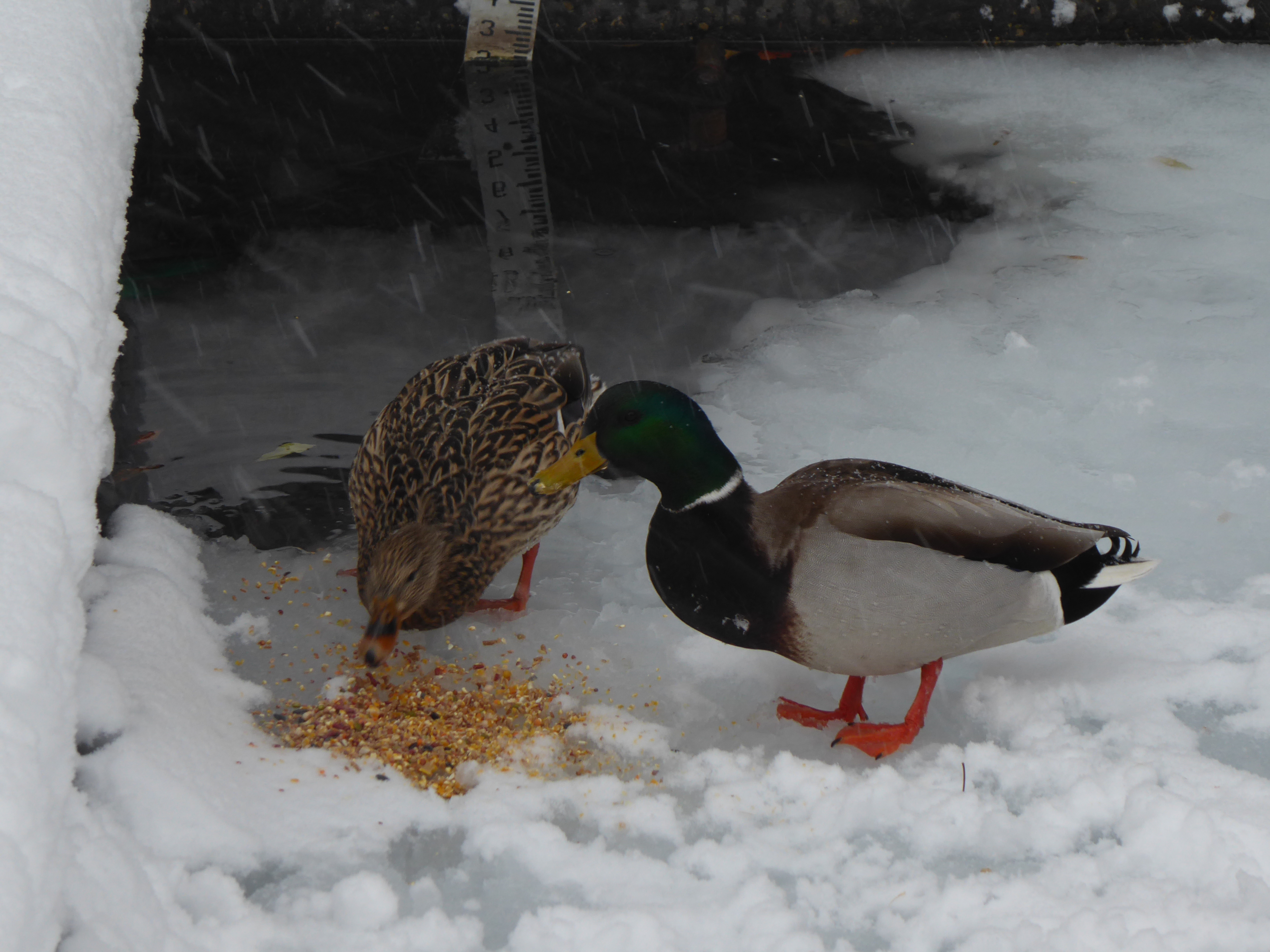 And duck pellets, which you can see strewn on the snow: 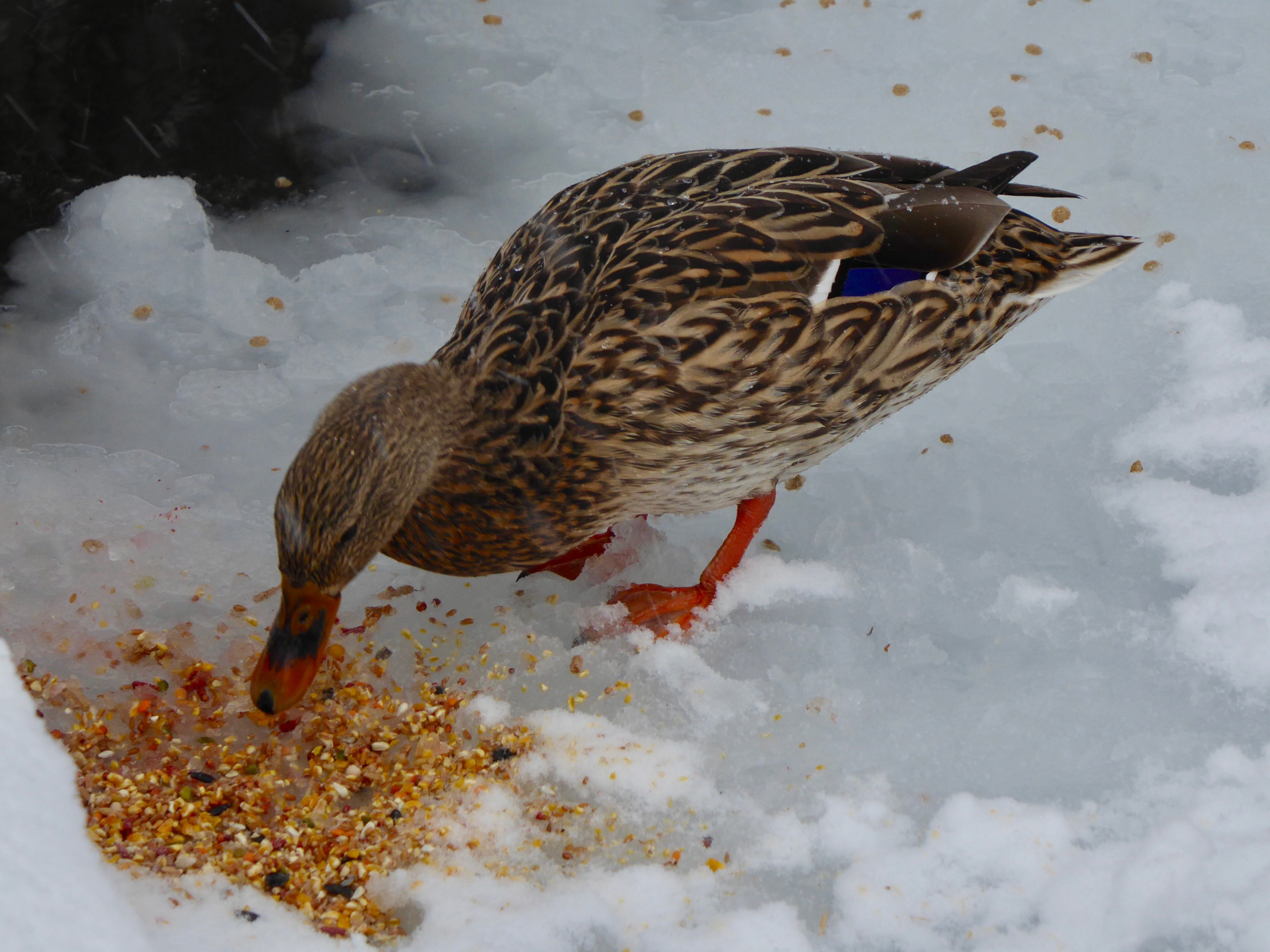 They were hungry; they ate like gangbusters. Here’s a video of the unnamed pair eating pellets (this was from January 26, but you see it’s the same hen):

And they love the scratch grain. Note that the hen in particular (Lara?) has to wash down nearly every bit of the grain with a drink of fresh water. The drake doesn’t need so much water:

Another pair showed up later, but I haven’t photographed them yet. I’ll do so, and feed them again, when I go home. 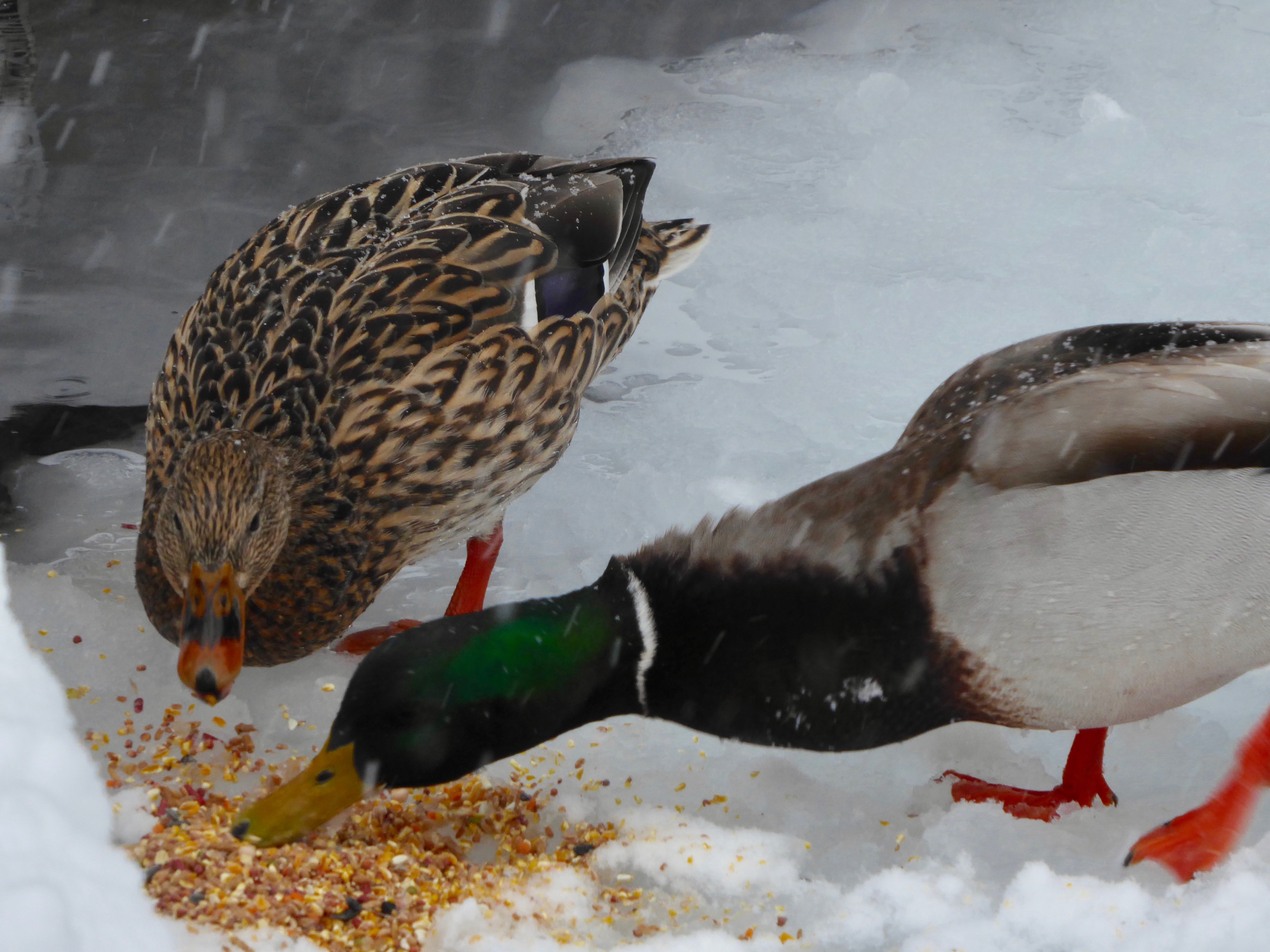 Isn’t she cute? (You can see the snow is still falling.) 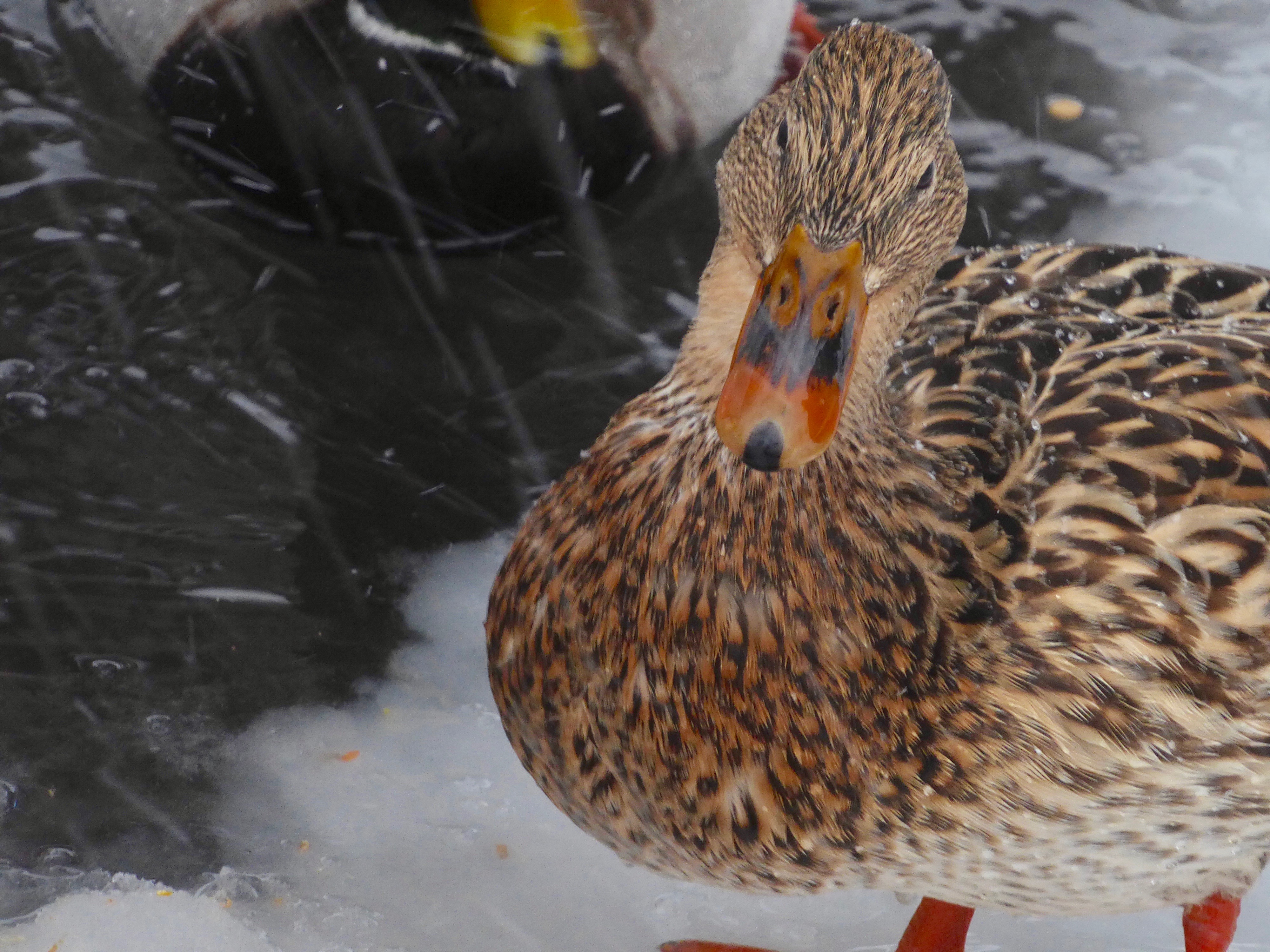 After a huge lunch, the two repaired to one of the small remaining areas of open water. I wish these ducks had flown south, but I guess we’re stuck with them. Lord knows where they go on the days when they’re not here. 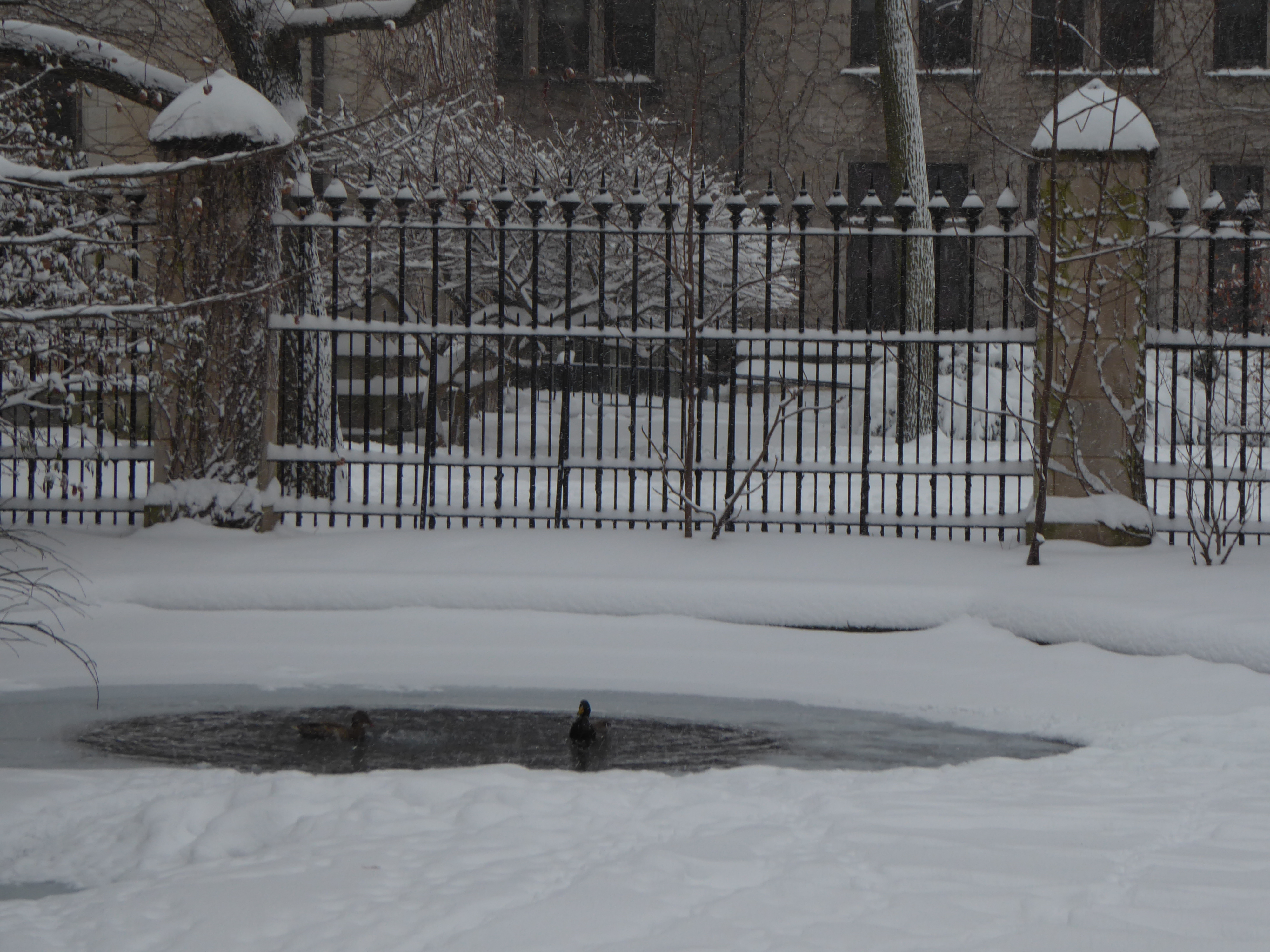 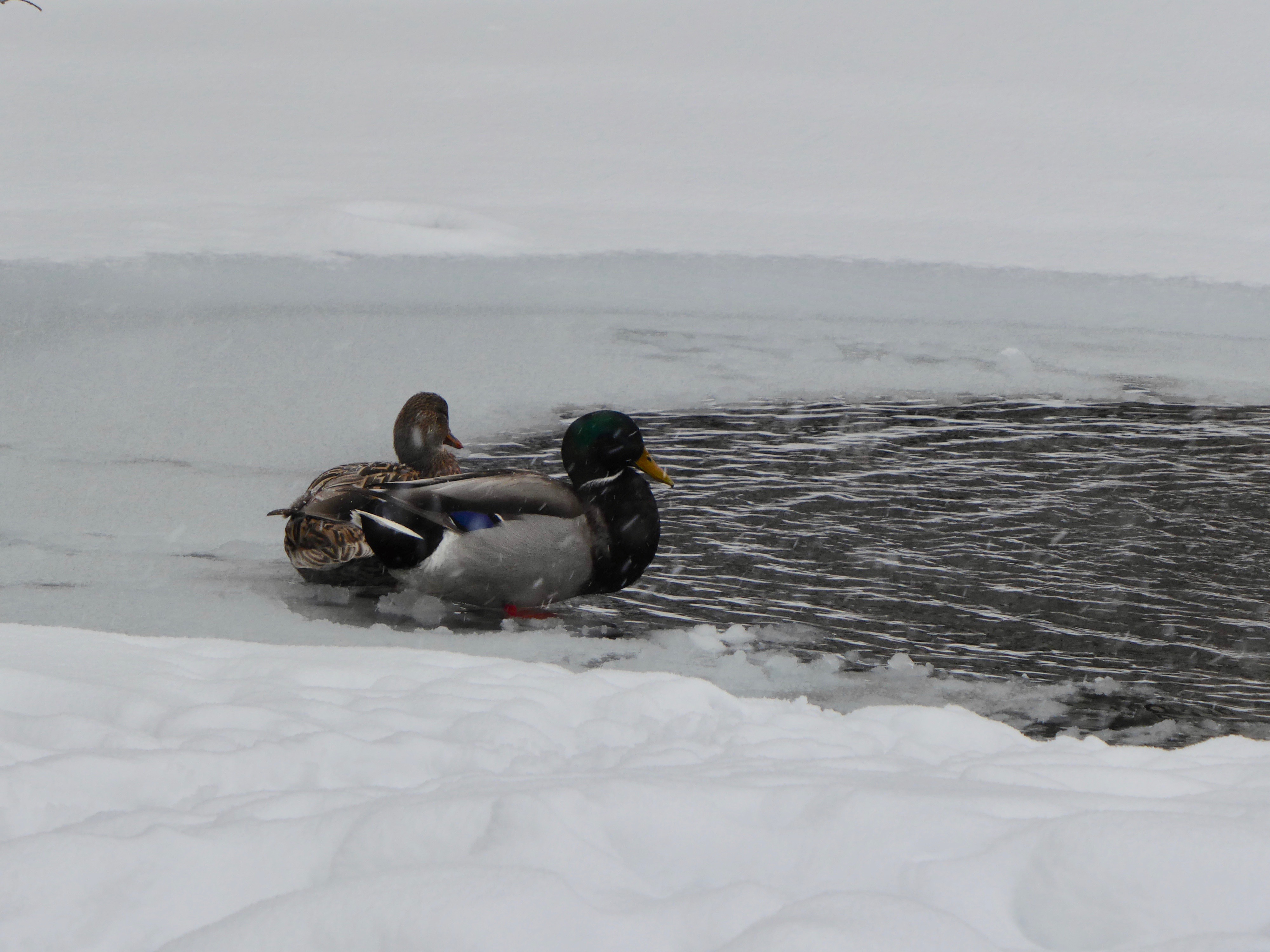