A while back, when John McWhorter and Glenn Loury were chatting on “The Glenn Show” podcast, McWhorter mentioned that he was writing a book on wokeness and anti-racism as a religion. In fact, he’d already written most of the book. I really look forward to reading it.  But if you want an advance peek, you can subscribe to McWhorter’s new Substack site, “It Bears Mentioning” ($50 per year; click on screenshot below), where he’s just put up what seems to be the book’s preface and the first chapter (or summaries thereof). I am going to show only the preface because it’s a pay site for most posts (i.e., the first one below); but you can read the short bit of the preface here to see if you want to either subscribe or buy the upcoming book.

The second article, on black fragility, is free, and you can get it by clicking here. 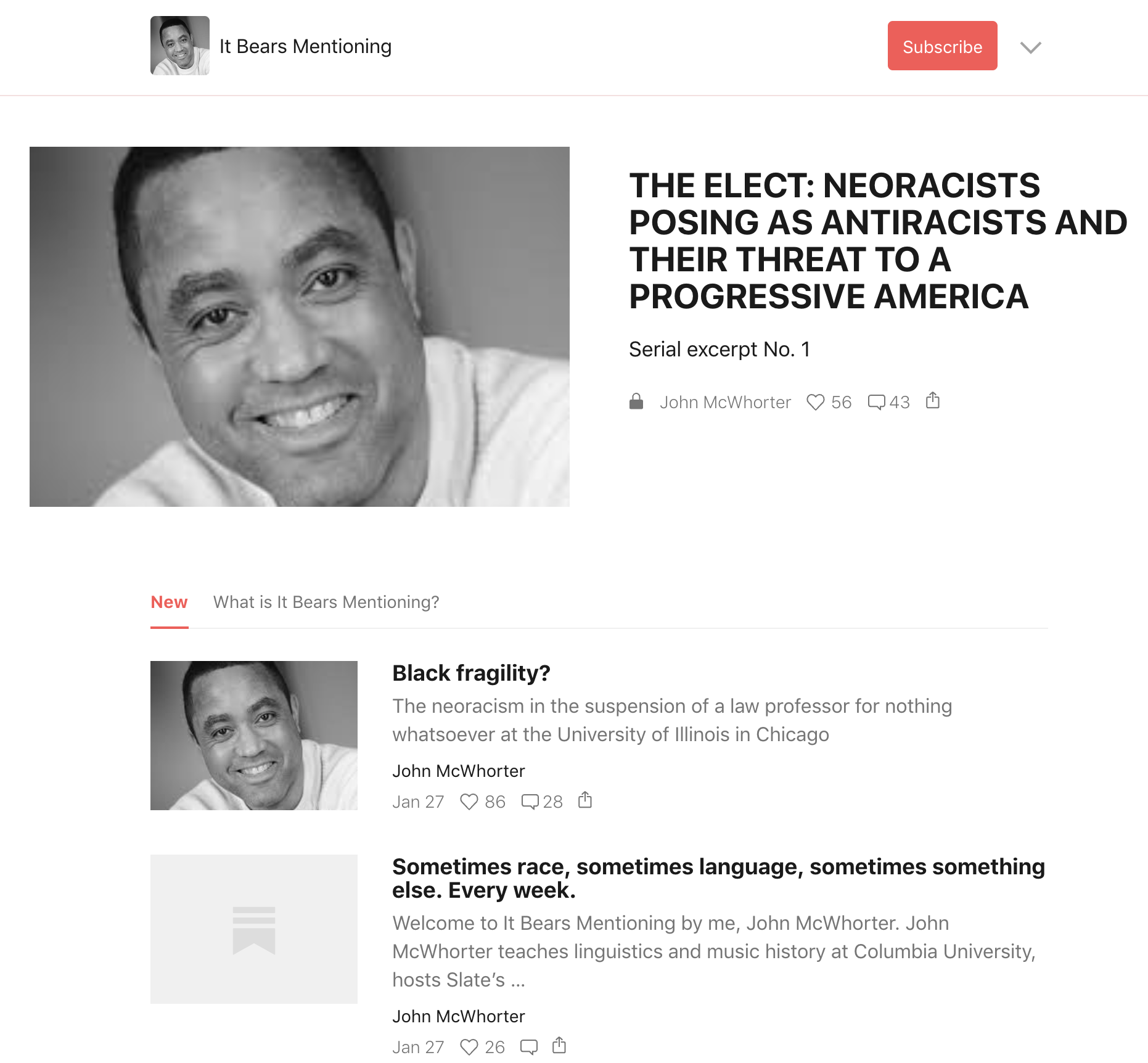 Oy! Between Bari Weiss, Andrew Sullivan, and John McWhorter—three good writers disillusioned by wokeness—it could run into serious money to subscribe to them all!

Here’s the preface of McWhorter’s book as reproduced in the post above. The title is good. But Chapter 1 (or a summary) is there too, and it’s much longer. If you want to see that, subscribe here.

AND THEIR THREAT TO A PROGRESSIVE AMERICA

I’m not one for long introductions – I like to get to the point. However, before we begin I would like to give the reader a sense of the trajectory of these installments, and what kind of statement they are intended as making.

This book is not a call for people of a certain ideology to open up to the value of an open market of ideas, to understand the value of robust discussion, and to see the folly of defenestrating people for disagreeing with them. My assumption is that the people in question are largely unreachable by arguments of that kind.

Rather, I aim to illuminate where these people are coming from, how their ideology and behavior is quite coherent in itself, and what the rest of us can do to live with grace and honesty, as people concerned with the state of the world, who nevertheless must grapple with obstacles laid in our path by people who see their religion as an ultimate wisdom.

My main aims will be:

I hope my observations will serve as one of many contributions to our debate over what constitutes “social justice.” Thank you for your subscription. I will release this manuscript in ten segments, and I welcome your feedback.

18 thoughts on “On his new Substack site, John McWhorter previews his upcoming book on antiracism as a religion”