Good morning on The Cruelest Day: Tuesday, January 19, 2021. The best news is that as of noon tomorrow, Trump will no longer be President of the United States. Perhaps appropriately, then, it’s National Popcorn Day.

It’s also Tin Can Day, World Quark Day, but it’s not the physics quark being fêted:

Created by The Queen of Quark, a German-born author and advocate for quark and healthy eating, World Quark Day celebrates quark, a fresh dairy product that is part of the acid-set cheese group. During the first year’s celebration, in 2019, The Queen of Quark teamed up with Hawthorne Valley Farm at GrowNYC Greenmarket in New York City’s Union Square, and gave away quark recipes and copies of The Queen of Quark’s new book, The Ultimate Quark Guide and Cookbook. 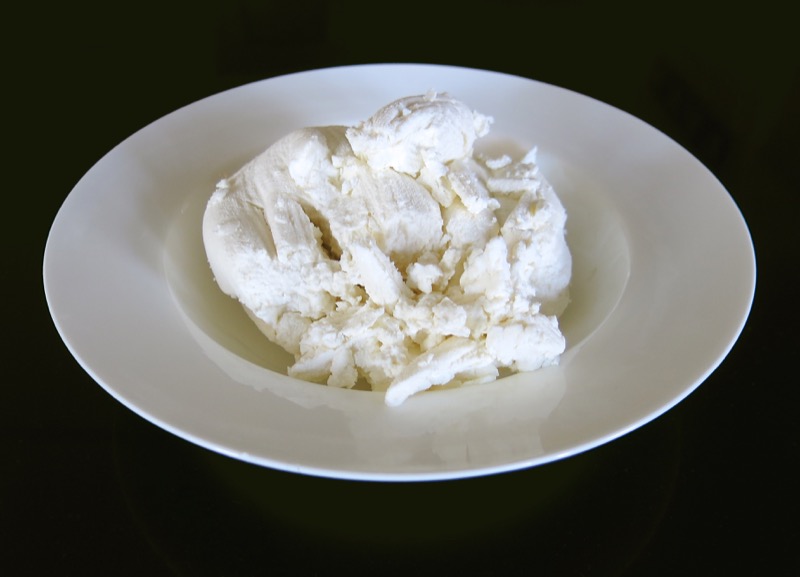 Finally, there are two holidays that I don’t think are going to be observed today: Confederate Heroes Day (Texas), and its related observance: Robert E. Lee Day (Alabama, Arkansas, Florida, Georgia and Mississippi).

Wine of the Day: You need a good wine to offset a modest meal like black beans and rice with hot sauce and a fried egg on top. And the wine should be fruity. This Argentinian beauty filled the bill. Semillon, a classical component of the sweet French Sauternes, is rarely made in a dry style, but it’s worth seeking out. This version tasted like somewhat a sauvignon blanc, but with the grassy notes replaced with a touch of honey that became more pronounced as the wine lost its chill. You could almost taste the embryo of its big brother, Sauternes, hiding in there.  It’s was better after I let the glass sit for about ten minutes to warm up; few white wines are better at refrigerator temperature than when slightly less cold. 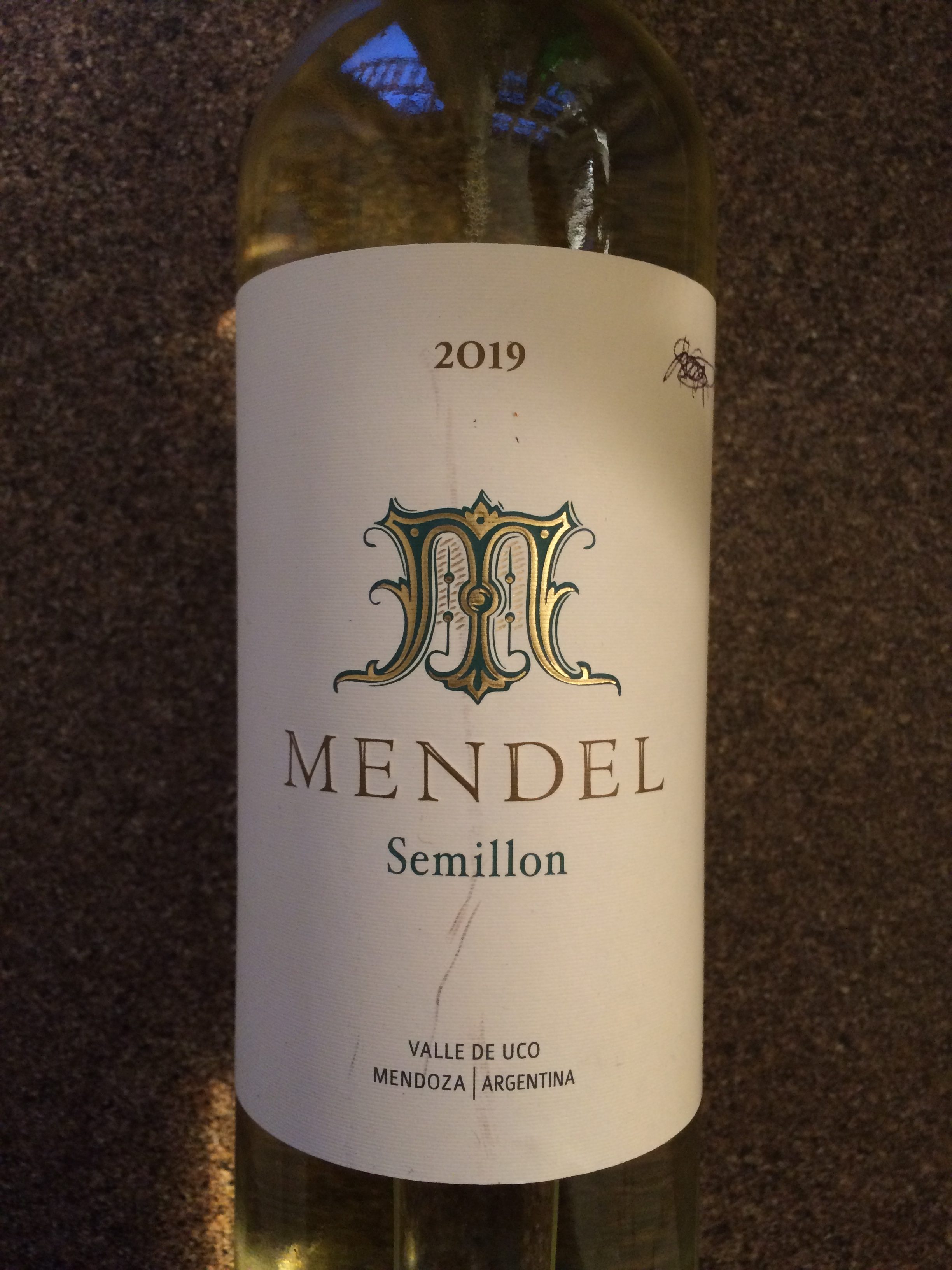 The CBC and other venues report that a Thai woman, identified only by her first name of Anchan, has been sentenced to 43½ years in jail for “insulting the monarchy”, i.e., criticizing it. This is equivalent to a strict blasphemy law, with the monarchy serving as religion.

The Bangkok Criminal Court found the woman guilty on 29 counts of violating the country’s lese majeste law for posting audio clips to Facebook and YouTube with comments deemed critical of the monarchy, the group Thai Lawyers for Human Rights said.

Conviction is punishable by 3-15 years of imprisonment per count. The law is being invoked to crack down on pro-democracy protests in Thailand. Here’s a photo of Anchan: 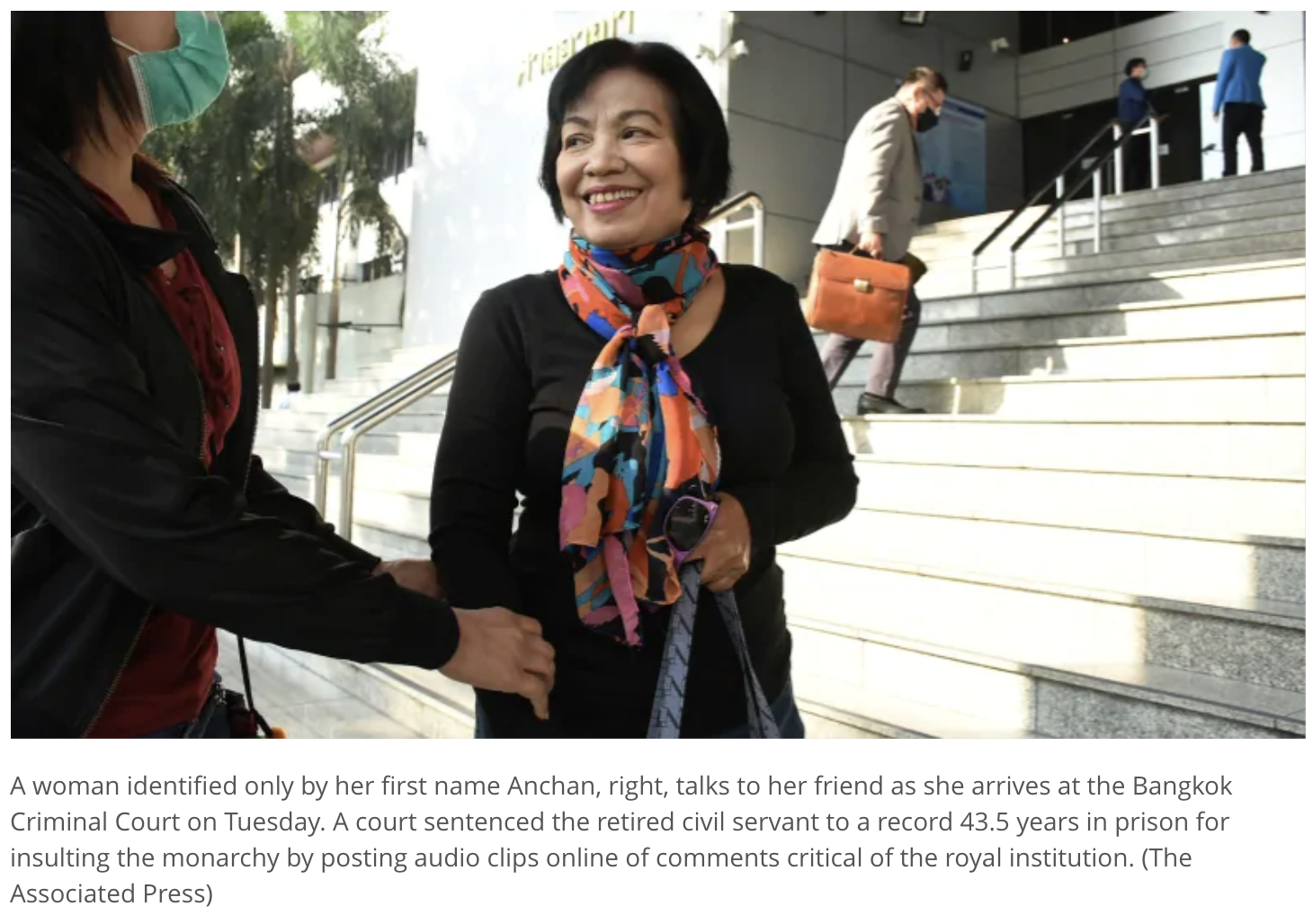 ABC News 6 in Pennsylvania reports that the woman who allegedly stole a laptop or hard drive from Nancy Pelosi’s office during the Capitol siege (not Pelosi’s own laptop, but an office laptop used for presentations) has been arrested. She’s identified as Riley June Williams of Harrisburg, and she was turned in after her ex-romantic partner (sex unidentified) spotted the “wanted” photo (below). Reports also said that Williams was planning to sell the laptop to the Russians via an intermediary.  The charges include “knowingly entering or remaining in any restricted building or grounds without lawful authority and violent entry and disorderly conduct on Capitol grounds”. It would seem that an intent to sell the device to the Russians might add some charges. Here’s Williams in action and her mug shot: 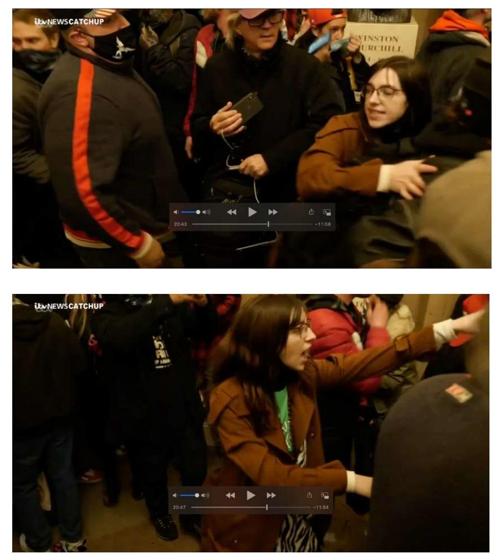 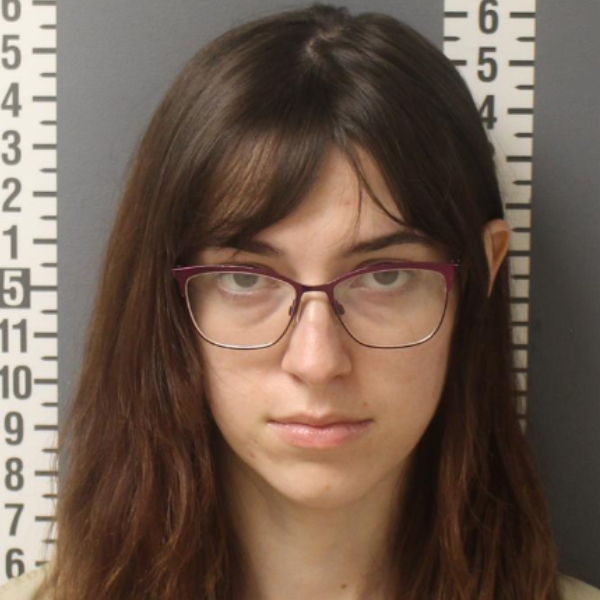 The NYT has a piece on Capitol invader Klete Keller, the now-notorious medal-winning Olympic athlete (he won two golds on relays with Michael Phelps). Friends and teammates identified him to the feds, and they found the incendiary Facebook post below. He’s been charged with three federal crimes: being in a restricted building, disorderly conduct and obstructing law enforcement. 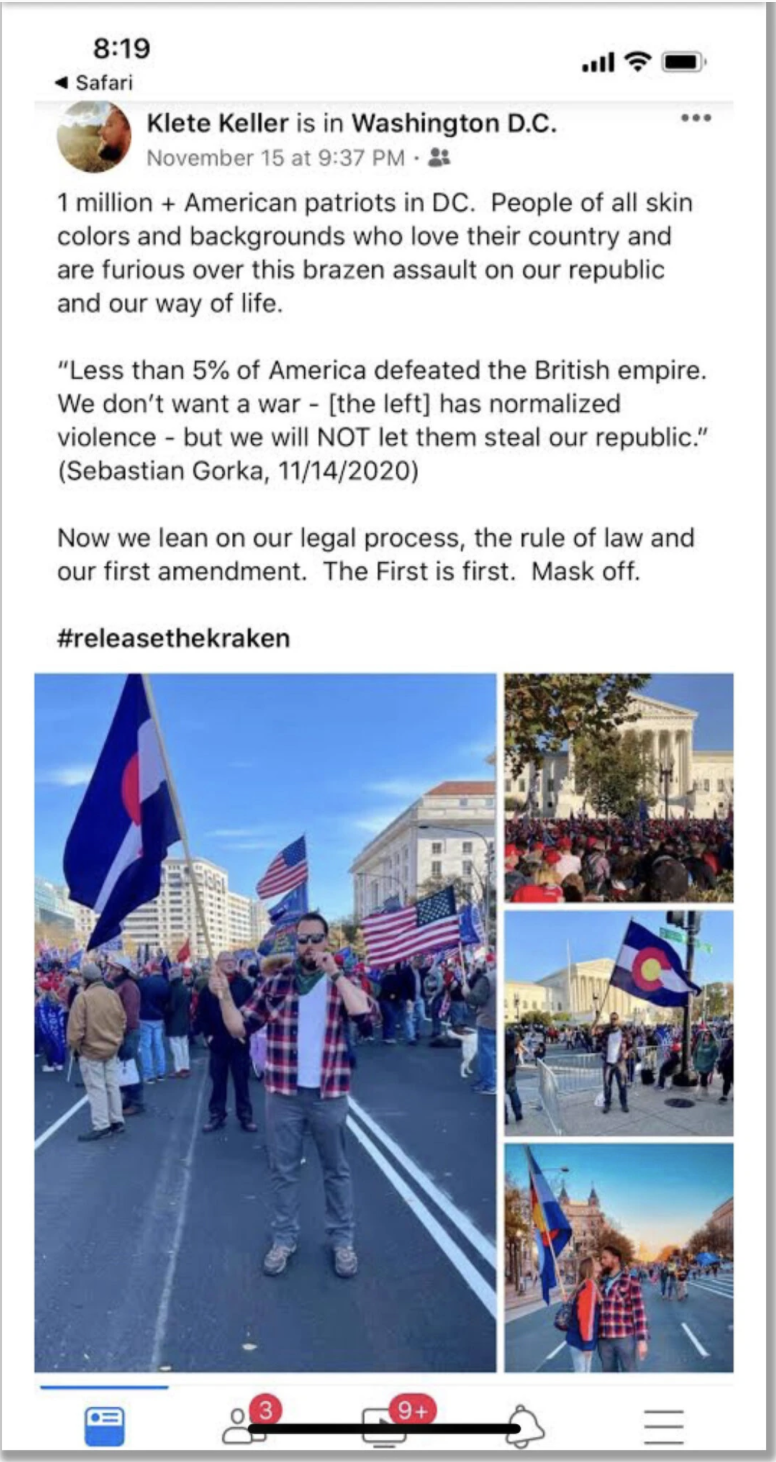 On Thursday, the day Keller was taken into custody in Colorado and then released after a brief appearance in court, he spoke to Urbanchek, the coach he had once described in U.S.A. Swimming’s media guide as “the type of man I want to be.”

Urbanchek said Keller cried throughout their 15-minute conversation. He was upset with himself, Urbanchek said, and told his old coach that “he never thought about what could happen.”

Keller’s had a tough life, including a divorce, lost of child custody, and a period of homelessness, but his friends still don’t know what turned him into an insurgent Trumpite. But being with the wrong people at the wrong time at the wrong place cannot excuse him from punishment. No, he couldn’t have done other that what he did, but he needs to be sequestered from others until he’s “cured”, and we need to punish these people swiftly as a deterrent to others.  But strip him of his medals, as some have urged? No way!

Bloomberg has a U.S. state and world vaccination tracker site, with interactive maps so you can see who has been give their jabs where. Click on the screenshot below to go to the site:

Lots of stuff happened on January 19, and include:

Here’s a bit of that episode: As Wikipedia notes:

“Lucy Goes to the Hospital” is an episode of the 1950s American television show I Love Lucy in which the title character, Lucy Ricardo, gives birth to her son, “Little Ricky,” after a “predictably chaotic” sequence of events. Twelve hours before the broadcast, the actress who played Lucy Ricardo, Lucille Ball, had given birth to Desi Arnaz, Jr. by cesarean section. The episode had actually been filmed on November 14, 1952.

The episode was the culmination of an unprecedented pairing of the fictional pregnancy of Lucy with the real-life pregnancy of Lucille Ball; “real-time pregnancy was fictively narrated for the first time on American television.

You can see photos of his self-immolation here.

Here’s an Apple Lisa, “with an Apple ProFile external hard disk sitting atop it, and dual 5.25-inch floppy drives.” 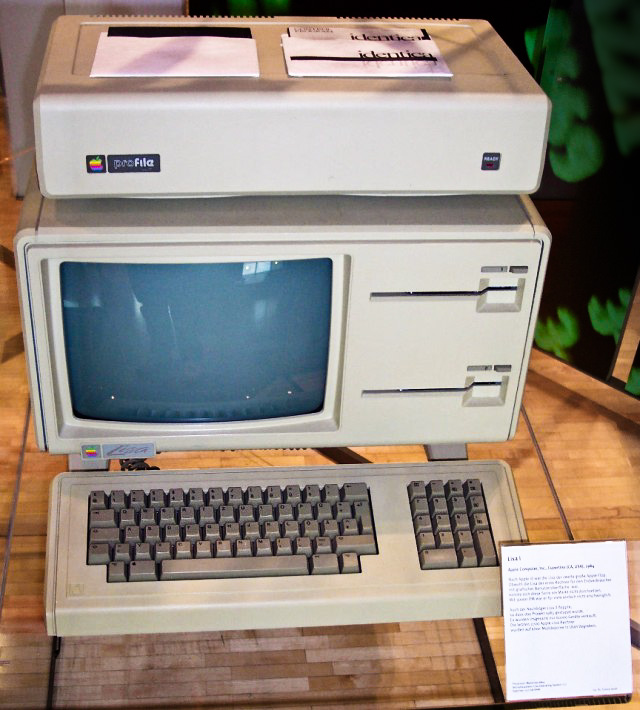 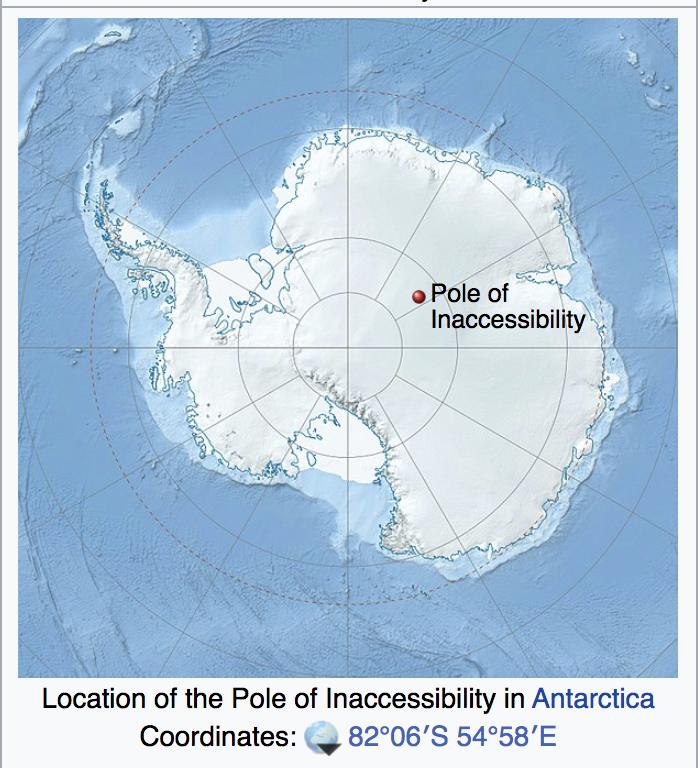 Here is a fine Cézanne, modified a tad for the Internet: 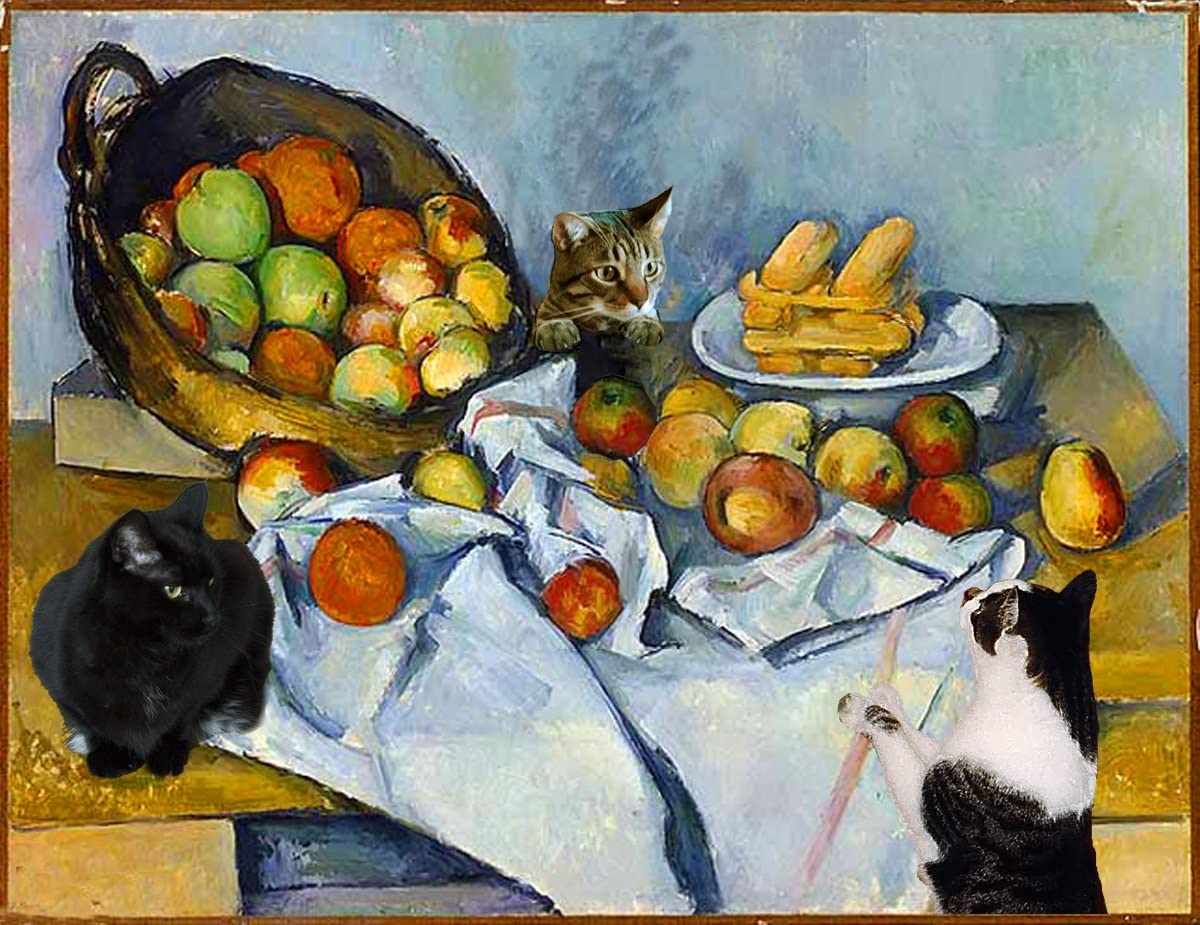 Matthew sent me this tweet about a Hungarian girl who was born on this day in 1940:

In June 1944 she was deported to #Auschwitz and murdered in a gas chamber. She was 4 years old. Her two years older brother Sandor was killed with her. pic.twitter.com/UBrzS6AkvC

Dolly’s 75 today, and here’s her best song: a farewell to her association with Porter Wagoner as she embarked on a solo career.

Those who found quietus on January 19 include:

This painting “Still Life with Black Cat” purports to be a Benton, but I’m not sure. It sort of resembles the faux Cézanne above. 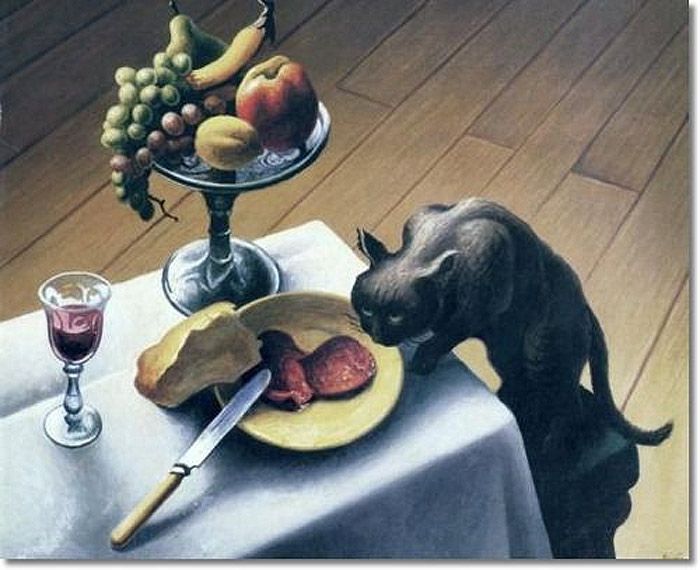 Musial is my favorite ballplayer of our era, not just for his record but because he was a gentleman, never questioning an umpire’s call) and because he played for my favorite team, the St. Louis Cardinals. He’s still the only guy to have hit five home runs in a single day—in a double-header. Here’s a nice video of his career, with Barack Obama reading his citation as he bestows the Presidential Medal of Freedom on Musial.

Levins who, along with a students, shared a floor with our lab at Harvard’s MCZ labs, was a real man of the people, and ran his own group like a Communist cell, complete with self-criticism sessions.

A: Why are you constantly looking behind you?
Hili: I’m checking to see whether anybody is following me. 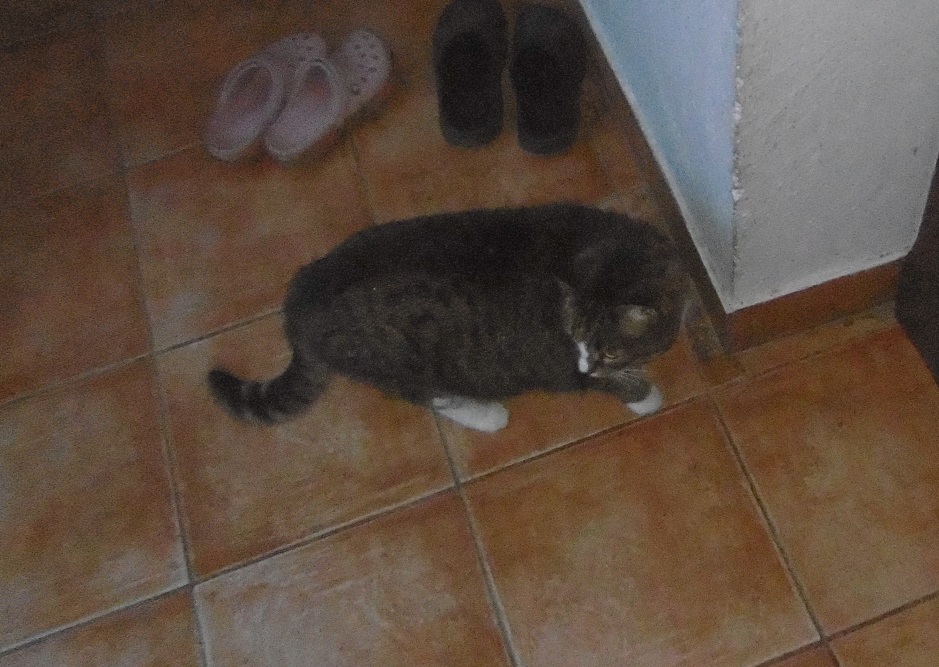 Kulka went outside in the snow, and it’s very cold!

Caption: The crackling cold continues. We have winter like in the old days. Only Kulka thinks it’s wonderful. (Photo by Paulina R.) 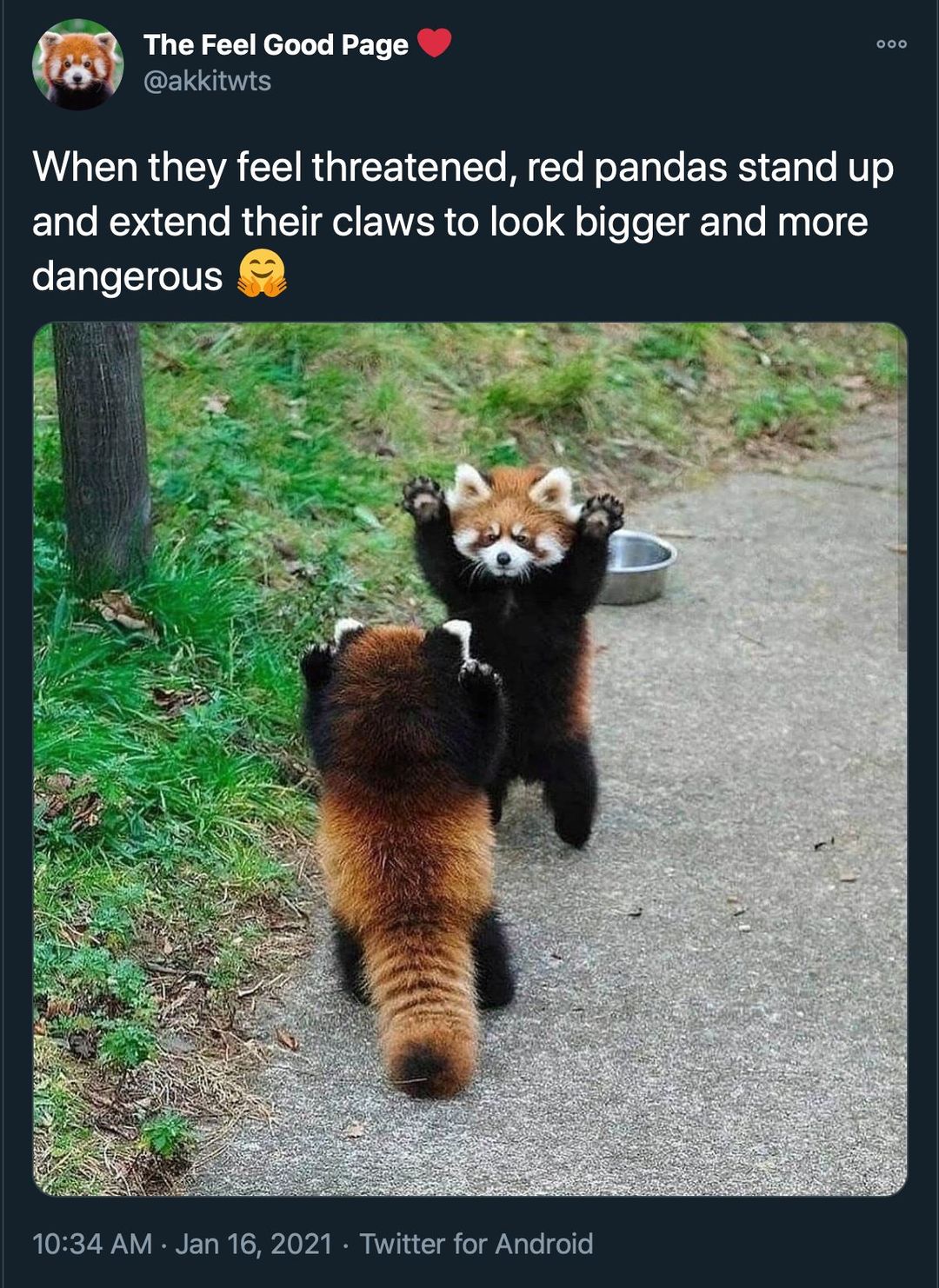 From Donna the Crazy Cat Lady. Are these cats from Yorkshire? 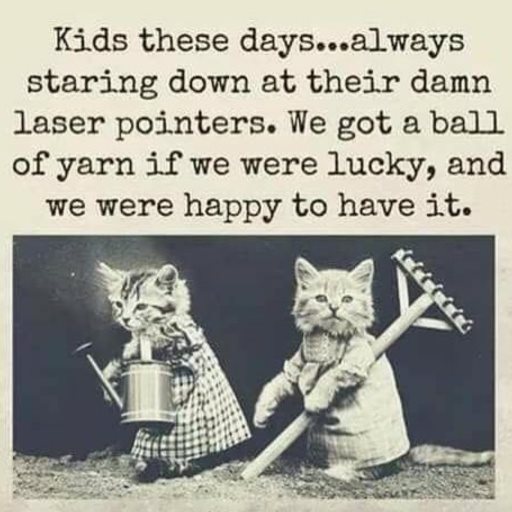 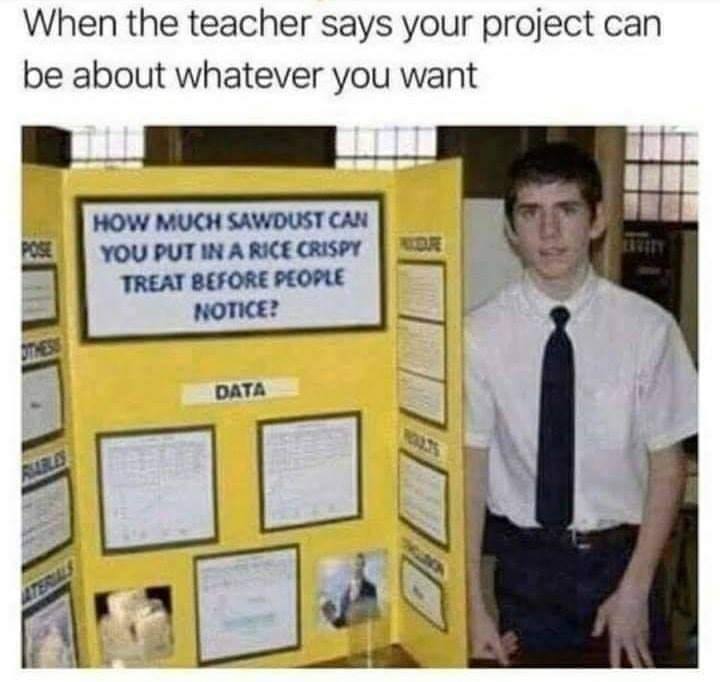 A tweet from Su: a tiger chew toy. Look at the strength of that cat!

Tiger has a new toy. pic.twitter.com/oqC5EjuBLF

Tweets from Matthew. The first one has some good news about the persistence of immunity in those infected and resistance to mutant spike proteins. Given that and the efficacy of the vaccine, Matthew’s surely right. But it will take some time and the willingness of people to take their jabs.

More good news. We will beat the virus. https://t.co/BDzkK8ajXf

This one has a 7+ minute video that will teach you about some of the logos and symbols used by various white-supremacist, nativist, QAnon racist alt-right, militia, gun-loony, and neo-Nazi groups. This is some disturbing footage!

We looked through hours of footage from the Capitol riot to decode the symbols that Trump supporters brought with them, revealing some ongoing threats to US democracy. 👇pic.twitter.com/ptdw7oJRTa

“Stoat on a trampoline” has to be a contender for best animal tweet of 2021 so far:

I present to you 'Stoat on a Trampoline' pic.twitter.com/8lrCZBCCa9

Want to see more mammals having fun? Check out these surfing sea lions (I think this video is from California):

I’d forgotten, until I saw this, how, for a few minutes about fifteen years ago, I watched seals playing in waves piling onto a shore in the Galápagos islands [source: https://t.co/czWFZCXy3o] pic.twitter.com/r94u2cDnVg

Translation: “Hanging scroll composition” (?). It’s a centipede, which means that it’s venomous. But it’s also pretty. (As Matthew notes, centipedes have one pair of legs per segment, as this creature does, while millipedes have two.)

Finally, a fellow who maintains his wit in difficult circumstances, like having half his colon removed (I used a screenshot since I couldn’t separate this tweet from its antecedent):