Matt Taibbi, a former writer for Rolling Stone, where he published on a variety of stuff (including sports), has now moved his writing to Substack, along with many journalists who can’t find a comfortable home in the woke mainstream media. His penultimate piece at his TK News site is a funny but scary guide to, well, see the headline below. You can read the piece for free by clicking on the screenshot below: 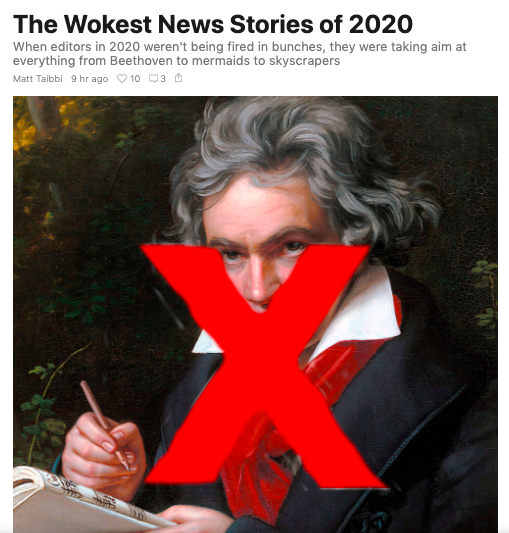 These ludicrous woke attacks on nearly everything are funny—or would be if they didn’t bespeak a fundamental change in our culture. Granted, that change may be engineered by a minority of chowderheads, but they’re loud and they’re powerful. Taibbi presents what he sees as the 16 wokest stories of last year. I’ve written about a few, and will put asterisks next to those. Many I missed, so I’ve given Taibbi’s links to them along with my own brief summary of what the stories claimed.

First, though, a few words from Matt:

The year 2020 will be remembered in the real world for a terrifying pandemic, mass unemployment, a nationwide protest movement, and a historically uninspiring presidential race. The year in media, meanwhile, was marked by grotesque factual scandals, journalist-cheered censorship, and an accelerating newsroom mania for political groupthink that was equal parts frightening and ridiculous.

The tiniest violations of perceived orthodoxies cost jobs. Reporters and editors were whacked en masse in uprisings at the New York Times, the Philadelphia Inquirer, the Wall Street Journal, Vox, the Miami Herald, and countless other places.

Some of the purges were themselves amazing news stories. A contractor named Sue Schafer was fired after the Washington Post published a 3,000-word expose about a two-year-old incident in which she attended a Halloween party dressed as Megyn Kelly, who herself had been fired from NBC for defending blackface costumes. Schafer, in other words, was fired for dressing in blackface as a satire of blackface costumes, in an incident no one heard of until the Post decided to make an issue of it. This was one example of what the New Yorker recently exulted as the “expensive and laborious” process of investigative journalism, as practiced in 2020.

Raymond Chandler once said that when he ran out of ideas, he just had a character burst into a room with a gun. 2020 op-ed writers in the same predicament could insert random nouns into a MadLibs template: “Is _____ Racist?” Everything from knitting to Jesus to women to botanical gardens to dieting to mermaids to  Scrabble and perhaps a hundred other things made the cut, to the point where it became a bottomless running gag for inevitable cancel targets like the satirical Twitter personality, “Titania McGrath.”

And the stories are below. Taibbi gives them in reverse order from #16 to #1, but I’ve given them in the opposite direction. The summaries are mine unless they’re in quotes or indented.

*1.) The Guardian, July 6: “Upward-thrusting buildings ejaculating into the sky’ – do cities have to be so sexist?”   Besides those phallic skyscrapers thrusting up as if to penetrate the heavens, the author sees the cities as places of inequity and violence, particularly against women. (My take is here).

2.) (Story uncovered) Here Taibbi faults the media for hypocrisy, covering stories with a Woke ideology but not covering similar stories that are unwoke. One example: decrying anti-lockdown protests as dangerous sources of infection, but not mentioning that the same thing was likely with anti-racist protests.

*3.) Huffington Post, April 23:  “I teach at Oxford, but I don’t want it to win the coronavirus vaccine race.” A student and teacher of women’s studies at Oxford doesn’t want her school to create the vaccine first because, after all, Britain is white and colonialist, and an Oxford vaccine would just be a “white savior” story. Curiously, though, the head of the Oxford vaccine-development team was a woman. (My take is here.)

4.) NPR, June 6th: “Your Bookshelf May Be Part Of The Problem.” If your bookshelf contains almost no books by nonwhite authors, then you’re buying into white supremacy. Or, if you have books by people of color, you better be ready to accept them whole hog. As the author says, “Anti-racist books will only do a person good if they silence themselves first and enter into the reading — provided they care enough to do so.”  Oy! SHUT UP AND READ—no thinking for yourself!

5.) Globe and Mail, September 5: “Is it time to decolonize your lawn?” (You’ll have to create free account.) Lawns symbolize not only control over nature, but the dispossession of indigenous people. They’re also an ecologically unfriendly monoculture and take too much resources to manage (I agree with this bit).

6.) ABC.com, July 1: “America’s national parks face existential crisis over race.” The workforce and visitors of parks are too white, creating an “existential race crisis.” The demeanor of rangers makes others feel “unsafe,” and there aren’t enough signs in Spanish. But as the author notes later in the piece, the implied racism may be something not invoving racism in the Park Service:

Lack of transportation to national parks and the cost of visiting were cited as the top reasons people — especially Black and Hispanic Americans — don’t visit them more often, according to the study. Twice as many black and Hispanic Americans said they don’t know what to do in national parks than whites. When asked if they share the same interests as people who visit national parks, 34% of Black respondents and 27% of Hispanics said no, compared with only 11% of whites.

7.) Yahoo! News, December 26: “Pixar’s ‘Soul’ is getting rave reviews, but it left me cringing up until the very last minute.” The “soul” of a Pixar character played by Jamie Foxx (black) is voiced by Tina Fey (white). That’s about it.

The essay connected George Bush’s conquest of Mike Dukakis in 1988 to the hypersexualized representation of a dreadlocked jungle alien in the famed Schwarzenegger flick, while connecting slavery, Dick Nixon’s Southern Strategy, the myth of the Welfare Queen, and the scourge of no-knock warrants to “Ridley Scott’s Alien franchise, with its vicious and endlessly breeding carbon black alien mother.” That film, the piece noted, “came at the height of neoliberal experiment and in the U.S. especially, an all-out assault on Black people.” (The British Scott made Alien in 1979).

9.) New York Times, June 29: “A White Gatekeeper of Southern Food Faces Calls to Resign.” A man in charge of a food organization that promoted southern food was white, despite his constant promotion of African-American food and help to African-American chefs and restaurants. His pigmentation seems to be the main problem.

Black vegan influencer Tabitha Brown previously told VICE that before she cut out meat and dairy she thought vegans were “white ladies who do yoga.” White people and their blogs dominate the results when key terms like “vegans,” “vegetarians,” or “vegan recipes” are plugged into Google. Nital Jethalal, a board member for Toronto Vegetarians Association, told VICE News he has been putting together a conference for vegans and it has been a lot easier to find prominent panellists online who are white. “The problem is few people think to go to the second page of Google results,” Jethalal said.

My take is here. VICE is heinous.

12.) Refinery29, January 21, “The Dangerous Rise Of Men Who Won’t Date ‘Woke’ Women.” This all comes from one comment by Laurence Fox, which triggers author Vicky Spratt into a long tirade. But he’s only one guy! And of course there are lots of Republicans who won’t be happy with “woke” women, but they’re dangerous for other reasons. A quote:

So it is fitting that white man of the moment, Laurence Fox – who appeared on the BBC’s Question Time programme and told a BAME audience member that Meghan Markle has not been on the receiving end of racism before subsequently appearing on the cover of The Sunday Times to tell the world that he does not “date woke women” and then displaying an appalling understanding of history by calling the inclusion of a Sikh soldier in Sam Mendes’ film 1917 “incongruous” – has “irrespective” tattooed on his arm.

Did you hear that at the back, ladies? Laurence Fox – who you perhaps only knew as Billie Piper’s ex-husband because you’ve never seen Lewis (what?) – does not date “woke” women who he believes are being taught that they are “victims”, irrespective of whether they are right or not. He thinks that it’s “institutionally racist” to tell the story of the First World War in a racially diverse way, irrespective of the fact that Sikh soldiers absolutely fought for Britain. And he also doesn’t believe in white privilege, irrespective of the fact that he works in a painfully undiverse industry, was privately educated and comes from a wealthy acting family which is nothing short of a dynasty.
There’s nothing funny about the things Fox – or Wokey McWokeface as he now wants to be known – is saying. It’s also not particularly sad. It’s dangerous. He is just one very privileged man, and as a result of said privilege, has been given a platform. And he has used that platform to legitimise a bigger backlash against diversity and progress which is unfolding every single day in less public corners of the internet.

*13.) Vox, September 16: “How Beethoven’s 5th Symphony put the classism in classical music.” We’ve discussed it and its sequelae before (see here and here). No need to reprise the discussion about whether the “pale, male, and stale” Ludwig is elbowing out more diverse composers from the pantheon.

14.) San Francisco Chronicle, September 8: “Wine’s diversity starts with the way we talk about the taste of wine.” This is paywalled, so I can’t see it, but Ann Althouse summarizes the thesis with a quote:

“. . . .it’s becoming clearer than ever that the conventional language used to describe wine isn’t merely intimidating and opaque. It’s also inextricable from racism and sexism, excluding dimensions of flavor that are unfamiliar to the white, Western cultures that dominate the world of fine wine and reinforcing retrograde notions of gender.”

Yes, but they are familiar to people who drink wine, although one of the biggest consumers of fine with are the Chinese, who don’t seem to be excluded from this “white Western culture.”

15.) Deadspin, June 22: “We’ve Lived with ‘The Masters’ Name Long Enough.” The golf tournament needs to be renamed because “at dictionary.com, one of the definitions you get for ‘master’ is ‘owner of a slave.’  But the first definition (I looked it up) is “a person with the ability or power to use, control, or dispose of something: a master of six languages; to be master of one’s fate.”

16.) Fast Company, June 15: “5 thoughtful ways to approach discussing racism at work.”  Some of the tips are okay, but the entire article assumes that black people are uber-fragile and must be catered to in meetings at every turn, not treated as equals. It’s a prime example of “soft bigotry.” And here’s one invidious tip that Taibbi singles out:

DO BE MINDFUL OF OPENING UP MEETINGS AND INTERACTIONS WITH QUESTIONS LIKE “HOW ARE YOU?” OR “HOW WAS YOUR WEEKEND?”

Recognize that by doing so, you can potentially be re-triggering what your Black colleagues are experiencing or dismissing their experience by pretending all is normal. It’s not and hasn’t been for a long time.

This I don’t get. Is the assumption here that one’s black colleagues have very different kinds of weekends than we do? And this “re-triggering” trope is arrant nonsense.

So that’s it, and I should have kept a list like Taibbi’s. These are all articles that espouse a woke point of view, but there are many more articles about the dangers of Wokeitude than these, including the many I’ve written about “progressive”, authoritarian Leftism in colleges and the media.