In September I reported on the movement to disenfranchise Beethoven, trying to reduce his hegemony in classical music because he’s white and dominant and that in itself is oppressive. This was expressed most invidiously in a Vox piece by two chowderheads, “How Beethoven’s 5th Symphony put the classism in classical music.” It’s pretty predictable, containing stuff like this:

Beethoven’s Fifth Symphony starts with an anguished opening theme — dun dun dun DUNNNN — and ends with a glorious, major-key melody. Since its 1808 premiere, audiences have interpreted that progression from struggle to victory as a metaphor for Beethoven’s personal resilience in the face of his oncoming deafness.

Or rather, that’s long been the popular read among those in power, especially the wealthy white men who embraced Beethoven and turned his symphony into a symbol of their superiority and importance. For some in other groups — women, LGBTQ+ people, people of color — Beethoven’s symphony may be predominantly a reminder of classical music’s history of exclusion and elitism.

It might be, but I doubt it. These people surely have more important things to worry about. What’s being done to Beethoven by this clowder of chowderheads is symptomatic of the disdain for merit that is part of Wokeness. But don’t get me started.

Since it’s the 250th anniversary of Ludwig’s birth, these “cancel Beethoven” pieces have become more numerous. They complain not only about his dominance in the concert hall, but about how “policing” of classical music in general has led to rules like not clapping between movements. Such practices are said to be elitist and exclusionary, though I’m not sure who’s excluded. And in these times, the fact that Beethoven is seen as the brightest star in the musical galaxy, combined with the fact that he was white, old, and a male, is reason enough to go after him. (He was only 38 when he wrote the Fifth, but that was old then!)

Now the question of Beethoven Oppression arises again, this time at Varsity, the independent student newspaper of the University of Cambridge. The author, James Mitchell, is much concerned with diversity, and has also challenged chapel choirs and church music in general for not being sufficiently diverse.

Surprisingly, the answer to Mitchell’s title question below is “no,” but not for the reasons you think (i.e., that maybe Beethoven wrote good music). Click screenshot to read: 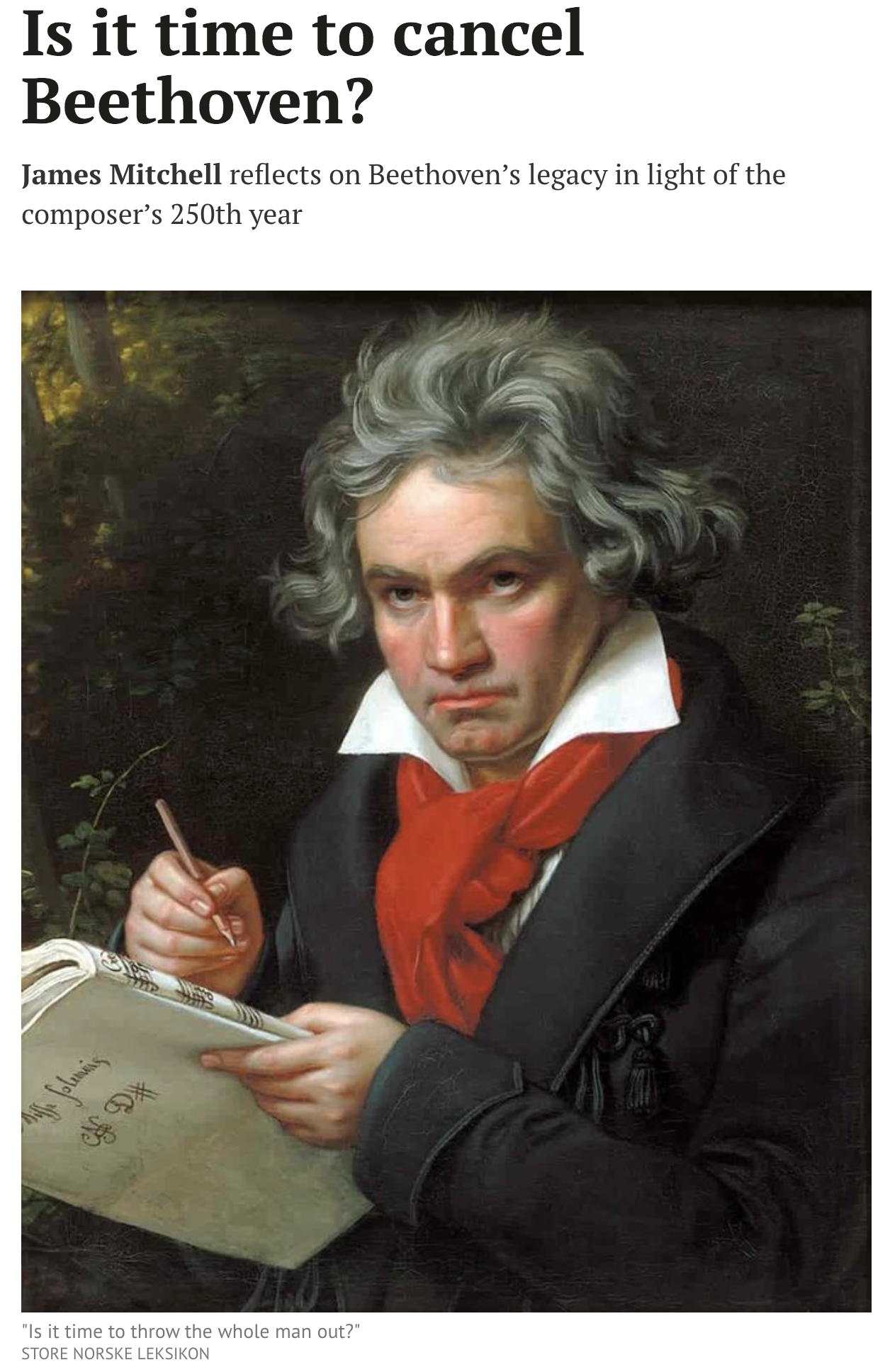 First, Mitchell poses the question, reprising a few licks that the Woke have given Ludwig lately:

In light of the recent #MeToo and BLM movements, Beethoven’s symbolic nature as the potentially prototypical ‘pale, male and stale’ composer has become ever more prominent. The feminist musicologist Susan McClary infamously compared the recapitulation in his Ninth Symphony to “the throttling murderous rage of a rapist incapable of attaining release”. Is it therefore time to throw the whole man out? If we ‘cancelled’ Beethoven, wouldn’t that eventually result in a more diverse, inclusive and accessible classical music scene?

(Do have a look at that link to the “Beethoven rape controversy”.) At any rate, the appeal of Beethoven is imputed to critics who touted his music in the twentieth century, not to the ears of concertgoers, and yet, says Mitchell, that appeal itself reduces diversity:

Beethoven’s central musical status has grown even into the 21st century. The question of “Was Beethoven Black?” keeps resurfacing over 100 years after being first proposed. He was the most performed composer in America in 2019-20, with over double the number of performances of Mozart (the second most performed). Being a guaranteed ticket-seller and donor pleaser, he keeps reappearing in concert programmes to the exclusion of other, more diverse composers. In the neo-liberal world, where audiences prefer the familiar, such attitudes to programming are unlikely to change unless there is a mass cultural boycott (i.e. ‘cancelling’) of composers like Beethoven.

Mitchell doesn’t explain what he means by “other, more diverse composers”, but you can bet he doesn’t mean French or Finnish ones.  In fact, Mitchell doesn’t favor a boycott of Beethoven, though he seems surprised that some people like his music:

Is this therefore the way forward? Well, not really. Notwithstanding that some people actually like Beethoven’s music, the problems classical music faces are more deeply rooted than just a single composer. The nationalist and colonialist appropriation of classical music by Wagner and others, with its attached racism and sexism, is part of its history. More problematic is the argument posed by musicologist Anna Bull: “Classical music requires the exclusionary practices described earlier [in her chapter] in order to demonstrate how it is different from other genres”.

According to Bull’s theory, removing Beethoven from the scene would only result in a different ‘pale, male and stale’ composer (e.g. Mozart) taking his symbolic place. Sustaining these exclusions, Bull argues, protects “classical music’s special status as ‘legitimate’ and its concomitant high levels of public investment”. Removing Beethoven would therefore not fundamentally change this situation.

In fact, it could make it worse. Music, particularly classical music, is fundamentally intertwined with politics as the recent Rule, Britannia row shows. Such an overtly political move as cancelling Beethoven would generate tension and a possible loss in ticket revenue from the right-wing audience (which has happened before with Beethoven). In a world of limited arts funding, with coronavirus having hit classical music hard, any drop in revenue could lead to organisations relying even more on other bankable hits, leading to a greater exclusion of more diverse composers. To cancel Beethoven could potentially work against its intended goal; while this view may be slightly speculative, it must at least be taken into account.

Read the second link about the loss in ticket revenue “which has happened before with Beethoven”. That link is intellectually dishonest, because the loss in ticket sales is very likely due to factors other than politics and Brexiteers boycotting a German composer. But the upshot of Mitchell’s argument is that canceling Beethoven might cause everybody to stay away from the concert halls, leading to even more exclusion of “diverse composers.”

Mitchell concludes that “every way forward is problematic”. If you cancel Beethoven, you cancel more “diverse” composers. At least he has the sense to realize that there are side effects of cancelling stuff that people like.

Now I’m not a classical music expert, but it’s possible that Beethoven’s hegemony is due not to his promotion by influential critics in the 20th century, nor to aversion to “diverse” composers, but rather aversion to modern classical music.  I’m not your average concert goer, but I do listen to classic music on occasion, and I have to say that my own personal liking—the music that moves me emotionally—ends with people like Ravel. The modern stuff leaves me cold. I guess it does to other people too, which is why it’s leavened in concerts with older and more familiar pieces. Yes, I’m a philistine, and I’m sure some readers will say that there are a lot of good classical musicians out there as good as Beethoven, but they’re simply not appreciated.  There are modern Beethovens, they’ll say, but they haven’t yet found their feet due to the “shock of the new.”

I can speak only for me, but I’ll suggest, as I have before, that, like rock and roll, classical music has had a good run, but it’s producing works that no longer appeal. And it’s not just because people haven’t learned to appreciate it.  But much of the old stuff is still good, and, like jazz buffs who return to Charlie Parker, Count Basie, and Duke Ellington, the new stuff doesn’t swing. It’s not a diversity problem, but a modernity problem.

Now have at me!

100 thoughts on “Is Beethoven too “pale, male, and stale” for these times, oppressing more diverse composers?”