Abbas Ghassemi is a “teaching professor” of chemical engineering at the relatively new campus of The University of California at Merced.  He’s also a nasty piece of work: the most blatant form of anti-Semite who, between June and December, tweeted the most shopworn stereotypes about Jews on his 18-month-old Twitter account.  His activities, now under investigation—though I contend they shouldn’t be—are recounted in the Times of Israel (below; click on screenshot), the Jewish News of Northern California (JNNC) and The San Francisco Chronicle (paywalled). 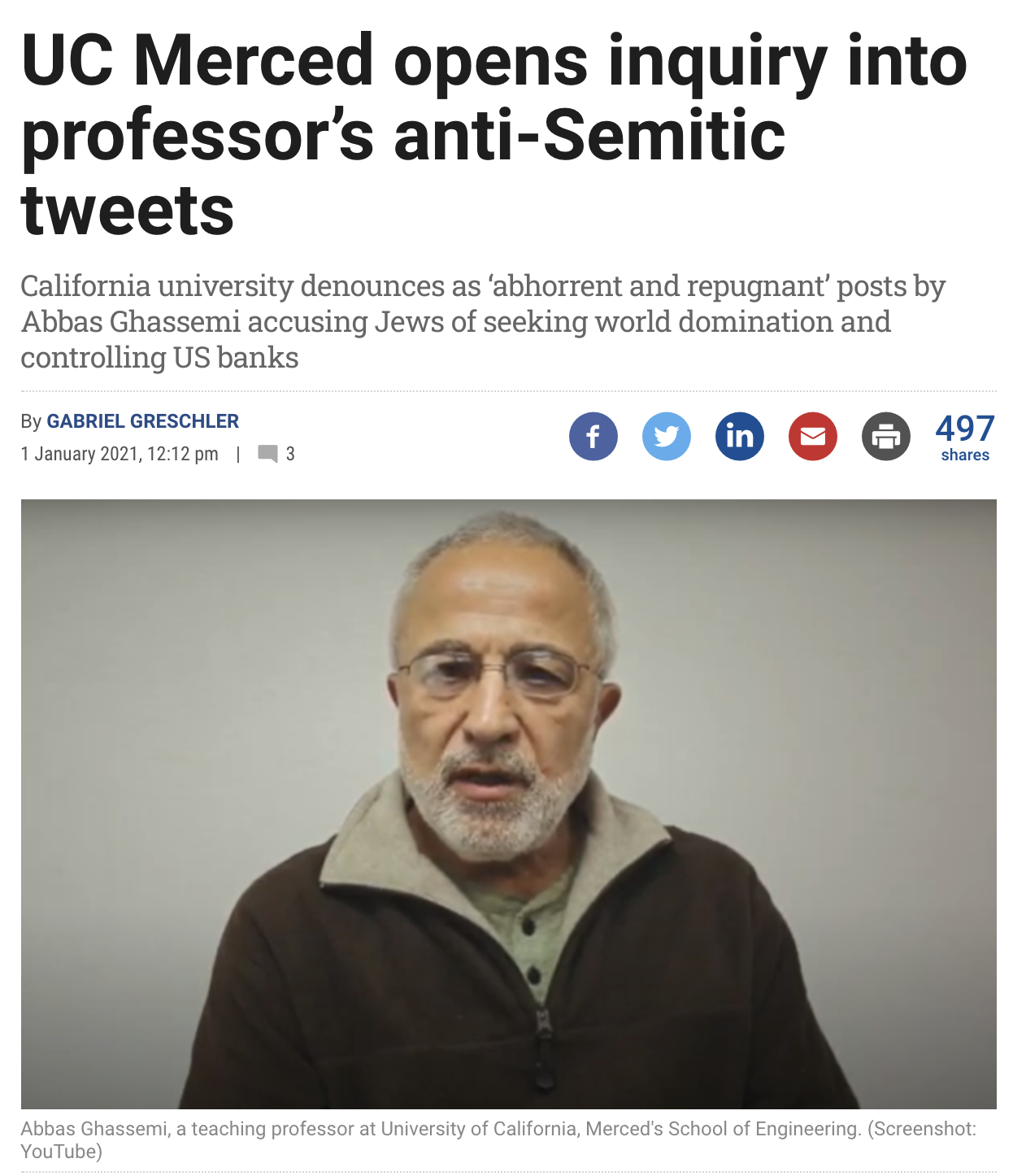 A teaching professor in the UC Merced School of Engineering is the owner of a Twitter account that had a pattern of antisemitic posts, J. [JNNC] has discovered. The content was described by the Anti-Defamation League as “repulsive” and promoting “antisemitic tropes.”

On June 14, Abbas Ghassemi tweeted “… reality bites!!!!!!” along with a photo of a “Zionist brain” with labels such as “frontal money lobe,” “Holocaust memory centre” and “world domination lobe.” That same image can be found on the website “Jew World Order,” which peddles antisemitic conspiracy theories.

On Dec. 8, in response to Joe Biden’s election win, Ghassemi retweeted another Twitter user’s post and commented, “Surprise, surprise!! The entire system in America is controlled by [the] Zionist. Change of president is just a surface polish, change of veneer. Same trash different pile!”

Many of Ghassemi’s tweets used “IsraHell” in place of “Israel.”

On Dec. 13, he retweeted something and added the comment, “the Zionists and IsraHell interest have embedded themselves in every component of the American system, media, banking, policy, commerce … just a veneer of serving US interest and population — everyone pretends that is the case.”

Ghassemi tweeted similar posts about Zionists and Israel controlling certain components of the United States another eight times between October and December.

He deleted his account after JNNC made inquiries, though a few of his tweets got captured. A particularly invidious one is below:

Antisemitic tweets by @ucmerced Professor Abbas Ghassemi include a brain diagram with "Holocaust Memory Centre" and "Frontal Money Lobe", and a Magen David as a blood-soaked pentagram in cover photo.

The whole thing. This is about as stereotyped as you can get. 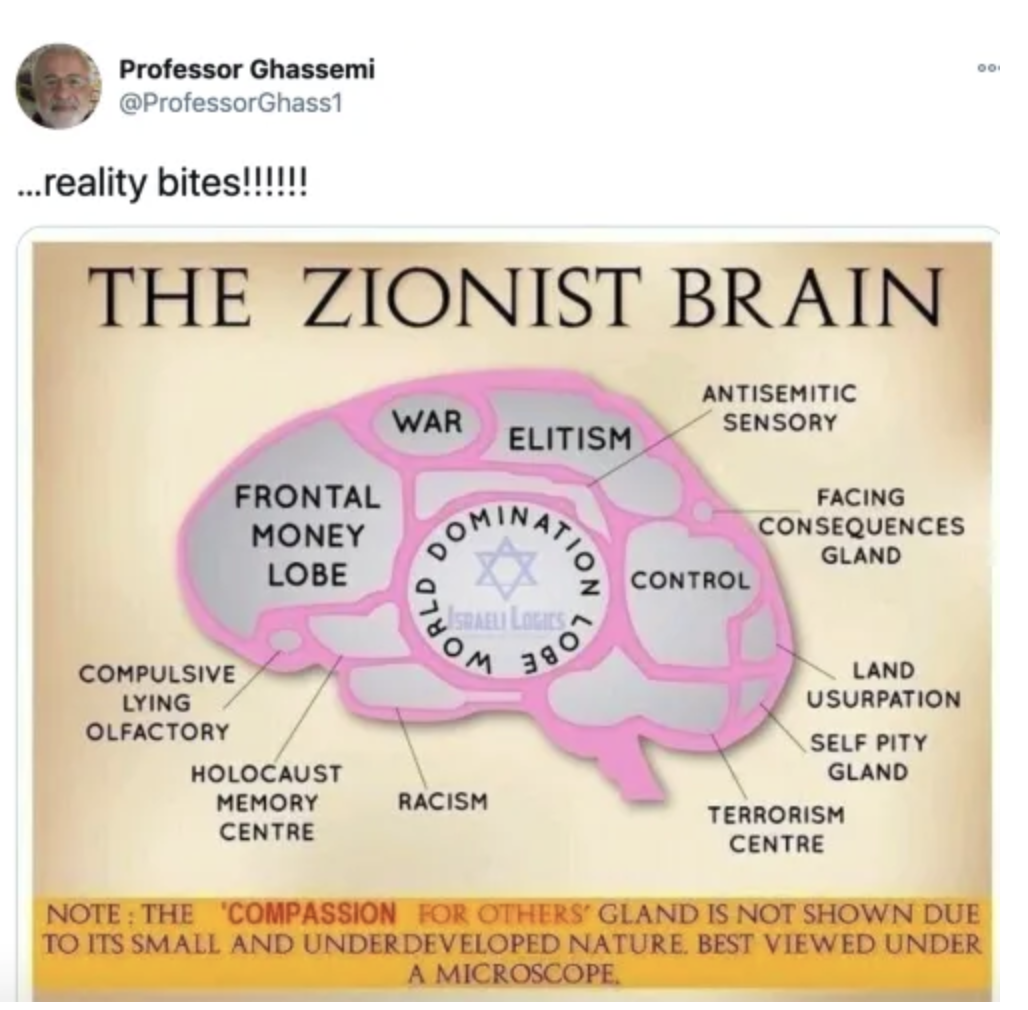 Yes, the stuff is absolutely repugnant. In response, the Chancellor and Provost of his university wrote an open letter to the community decrying the hatred of the account (Ghassemi wasn’t named) and saying that an investigation has been started. An excerpt from the letter:

The opinions presented in this Twitter account do not represent UC Merced or the University of California. They were abhorrent and repugnant to us and to many of our colleagues and neighbors; they were harmful to our university, our students, and our years of work to build an inclusive and welcoming community.

The Twitter account, now deleted, was called to our attention by the media. We have now confirmed the account was in fact associated with a member of our faculty. The professor’s dean subsequently emailed faculty and staff in the school on Dec. 23 calling the tweets “reprehensible” and affirming that they in no way represent UC Merced. We have called upon the dean and department chair to work with the Office of the Vice Provost for Academic Personnel to conduct an inquiry into potential violations of our standards, the UC Faculty Code of Conduct or other policies of the university, to determine what consequences are appropriate.

We have heard from some students who have raised concerns about this faculty member’s online statements about their heritage. These concerns will be addressed through the Offices of the Vice Chancellor for Student Affairs and Dean of Students.

We are also directing the Office of the Associate Chancellor for Equity, Diversity and Inclusion to develop programming for the spring semester that addresses free speech, hate speech and anti-Semitism in academia and promotes ways to challenge discriminatory insinuations when and wherever they emerge within the university community.

Ghassemi’s tweets almost certainly violated Twitter’s “hate speech” rules, and his account would have been deleted. He’s also been criticized by the Anti-Defamation league. All that is legal. What may not be legal, and to my mind violates Ghassemi’s First Amendment rights (remember, Merced is a public university) is to conduct a university investigation. Unless there’s evidence that Ghassemi broke other university rules—and I can’t imagine what rules would prohibit him from speaking as a private citizen on social media—he has the right to say whatever he wants in public. Twitter may shut him down, but he could bawl his anti-Semitic drivel on the state capitol steps in Sacramento, for all I care, and he’d have the right to do that.

As for the putative “programming” that the University will develop that “challenges discriminatory insinuations,” well, that comes perilously close to violating Ghassemi’s First Amendment right as well. (He’s apparently retained a lawyer.)

Should the University have decried his speech as “abhorrent and repugnant”? I don’t think so. If Ghassemi pulled the same stunt at the University of Chicago, the response from the administration would almost surely be, “Professors have the right to say whatever they want in the public sphere.” Period. The University should not be in the business of decrying “hate speech” publicly, as that’s a slippery slope that could lead to their decrying debatable things as well, like criticisms of the Black Lives Matter movement. As our Kalven Report dictates, the University of Chicago should make public pronouncements on politics only when they deal with issues that immediately deal with the running of the University.

Look, I’m a secular Jew and have a soft spot for the Jewish people (though not the religion). I’m always accused of being a Zionist, and I suppose that’s true as I support the state of Israel existing as it is (though not necessarily all the settlements). But as far as anti-Semitic “hate speech” goes, bring it on. We can fight back with counter-speech, as as long as the haters don’t try to incite immediate and predictable violence, what they have to say is allowed. As is the speech of Professor Ghassemi, who should not be punished by the University.  The students can (and should) avoid the knucklehead, or contest his speech in every appropriate venue. But he shouldn’t be punished officially.

What interests me about this is the lack of coverage of Ghassemi’s activities. Jewish and Israeli papers have covered him, as have the local papers. But you won’t find it mentioned in liberal media like the New York Times, Washington Post, or of course the HuffPost. Anti-semitism is not something they usually report on, for the Left is imbued with it, though they call it “anti-Zionism.” (This is why Bari Weiss had to leave the NYT.) But imagine the coverage if Ghassemi posted anti-Black or anti-Hispanic racism as nasty as that which heaped on the Jews. It would be a national scandal!

In the end, Anti-Semitism is one thing, free speech another. If the latter permits the former, then so be it. We’re in no danger of gas chambers in America, and one of the best defenses against anti-Semitism is to allow its purveyors to out themselves, and then fight back—with words.

Here’s a poll, which I’ll try just to roll out our new polling plug-in: