The article below, from the Deutsche Welle, knocked me for a loop. Remember when J. K. Rowling was vilified as “transphobic” for putting up this tweet last December?

Dress however you please.
Call yourself whatever you like.
Sleep with any consenting adult who’ll have you.
Live your best life in peace and security.
But force women out of their jobs for stating that sex is real? #IStandWithMaya #ThisIsNotADrill

She then published an essay on her website in June explaining her stand on transexual women, discussing her own domestic abuse and sexual assault, decrying the “trans activists” who tried to destroy her career (impossible, of course) and, most tellingly, expressing sympathy for trans women in statements like this:

If you could come inside my head and understand what I feel when I read about a trans woman dying at the hands of a violent man, you’d find solidarity and kinship. I have a visceral sense of the terror in which those trans women will have spent their last seconds on earth, because I too have known moments of blind fear when I realised that the only thing keeping me alive was the shaky self-restraint of my attacker.

I believe the majority of trans-identified people not only pose zero threat to others, but are vulnerable for all the reasons I’ve outlined. Trans people need and deserve protection. Like women, they’re most likely to be killed by sexual partners. Trans women who work in the sex industry, particularly trans women of colour, are at particular risk. Like every other domestic abuse and sexual assault survivor I know, I feel nothing but empathy and solidarity with trans women who’ve been abused by men.

It’s a poignant essay, explaining in what ways she sees differences between trans women and biological women. Nevertheless, she was also attacked by two stars of her Harry Potter movies: Daniel Radcliffe and Emma Watson, who showed thereby that they were ignoramuses. As the DW article below (click on the screenshot) adds:

The Leaky Cauldron and Mugglenet — two of the biggest fan sites of the Harry Potter series — have also rejected Rowling’s beliefs.

“Our stance is firm: Transgender women are women. Transgender men are men. Non-binary people are non-binary. Intersex people exist and should not be forced to live in the binary. We stand with Harry Potter fans in these communities, and while we don’t condone the mistreatment JKR has received, we must reject her beliefs,” the sites said.

The sites also found “the use of Rowling’s influence and privilege to target marginalized people” to be out of step with “the message of acceptance and empowerment” in the Harry Potter books.

Read the essay: she is not “targeting marginalized people”—far from it. She shows empathy for them. She is making an argument for making some distinctions between trans women and biological women. That is an argument worth having, no matter what you believe.

On Saturday morning, I read that the Scottish government is proceeding with its controversial gender recognition plans, which will in effect mean that all a man needs to ‘become a woman’ is to say he’s one.

I don’t know how those plans are faring, but this is a very bad idea. If a reader knows about this initiative, please post below.

At any rate, the article below notes that Rowling’s essay was one of five nominated for the BBC’s Russell Prize, named for Bertrand Russell and awarded by the BBC’s media editor Amol Rajan for the best (nonfiction) prose of the year—prose that embodies Russell’s qualities of engaging language, erudition, and moral force.

To use the British term, I was gobsmacked. J. K. Rowling? The woman whom much of the world rejected as a “transphobe”?  The nomination didn’t comport with what I knew about the Beeb and its wokeness. 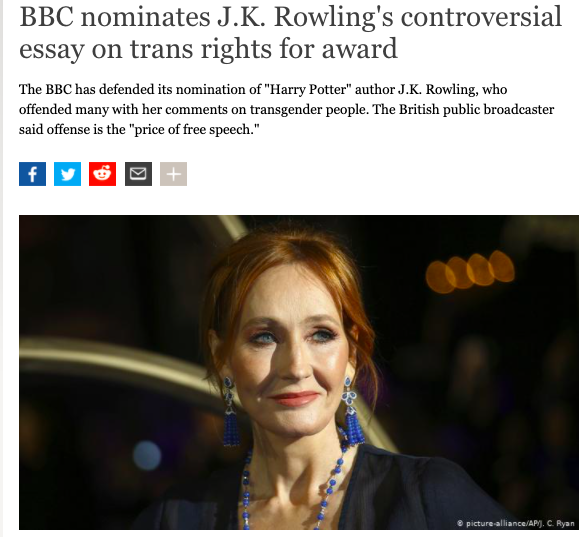 To be sure, the prize doesn’t seem to be an “official” BBC award—simply one editor’s take—but even so. . .

I was going to put this post up two days ago, and then forgot about it. In the interim, the Russell Prize was awarded—and Rowling didn’t win. You can see all the nominees at Rajan’s article below, and I’ve put up links to their pieces.

Here’s what Rajan had to say about Rowling’s piece in the nomination, and it’s very good:

JK Rowling: Reasons for Speaking Out on Sex and Gender Issues

JK Rowling is almost certainly the greatest writer of English children’s fiction of her generation, and a remarkable humanitarian. It turns out she writes exhilaratingly powerful prose too.

In a blog about the transgender debate, she offended many people. Offence is the price of free speech. Those offended felt she was questioning their identity and even attacking their human rights, which they argue is a form of discrimination or hate speech.

I take absolutely no view whatsoever on the issues that she raises.

I do take an issue on abuse and trolling, and Rowling has achieved the inglorious honour of topping many a league table for those. The deluge of hatred that she faced before writing this blog made it brave, and it was nothing compared to what came after. Talking about bravery, so too, by the way, was Suzanne Moore’s engrossing, long, personal essay for Unherd on why she left the Guardian.

We should all applaud bravery in writers – even those with whom we disagree. And Rowling’s essay contained moments of both real beauty and piercing honesty, as when she revealed that she is a survivor of domestic abuse and sexual assault.

What the judges – that is, the voices in my head – most admired about the writing was the plain English. It is an interesting fact about rhetoric that if you want people to understand something, plain, mono-syllabic words are usually your best bet: “Ask not what your country can do for you; ask what you can do for your country”.

Or think of the final line from Enoch Powell’s most notorious speech: “All I know is that to see, and not to speak, would be the great betrayal.”

I’m not endorsing the argument; but the rhetorical power of that line comes from the fact that there are 16 words, the first 15 of which have one syllable, and the last of which has three.

Compare it with this line in Rowling’s essay: “So I want trans women to be safe. At the same time, I do not want to make natal girls and women less safe.”

The rhetorical power from those two sentences derives partly from the plainness of the English. Only “women” (twice) and “natal” contain more than one syllable.

If you’re ever editing copy that seems verbose, go through it and think about cutting syllables while conveying the same meaning. Plain English has power. JK Rowling gets that.

The four other nominees and their pieces (with links) were:

Aitkenhead won, but I’m unable to access her piece because The Times is behind a paywall. Congrats to her, despite the horror and pain she experienced that her story describes.

But if nothing else, I hope the nomination gets people to go back and read Rowling’s essay. As happens so often these days, people, running in a social-media herd of sheep, attack something that they don’t even read. I would hope that Radcliffe and Watson read her essay, and, if so, why they see Rowling as somehow harming trans women.