Gender is widely agreed by the Left to be a social construct, not a biological reality. If that’s the case, why isn’t race? Why was someone like Rachel Dolezal, who was white but claimed to be black, vilified and fired from her job as the Spokane, Washington head of the NAACP, while a man who claims to be a woman (or vice versa) is defended and her courage lauded? The distinction has always baffled me, especially because race is also seen to be a social construct.

Those were the questions asked in an article recently published in the feminist philosophy journal Hypatia by Rebecca Tuvel, an assistant professor of philosophy at Rhodes College in Memphis, Tennessee. Her piece is called “In defense of transracialism“, and is free online (reference and link below).  I have only skimmed the full piece, but it’s dissected by Jesse Singal at New York Magazine’s “Intelligencer column” “This is what a modern-day witch hunt looks like.” And indeed, merely for pointing out that the arguments used to support transgender rights are similar to those that could be used to support transracial rights, Tuvel has been excoriated by academics, and the journal asked to retract the article. She has received a ton of hate mail. It is truly a Leftist witch hunt—a purity test that Tuvel apparently failed big time.

First, the abstract and first footnote in Tuvel’s paper:

And her concluding paragraph:

Haslanger writes, “rather than worrying, ‘what is gender, really?’ or ‘what is race, really?’ I think we should begin by asking (both in the theoretical and political sense) what, if anything, we want them to be” (Haslanger 2012, 246). I have taken it as my task in this article to argue that a just society should reconsider what we owe individuals who claim a strongly felt sense of identification with another race, and accordingly what we want race to be. I hope to have shown that, insofar as similar arguments that render transgenderism acceptable extend to transracialism, we have reason to allow racial self-identification, coupled with racial social treatment, to play a greater role in the determination of race than has previously been recognized. I conclude that society should accept such an individual’s decision to change race the same way it should accept an individual’s decision to change sex.

For this she is being crucified in public by her fellow academics, who accused her of not only being transphobic (not true at all), but perpetrating tangible harm and even violence on both the black and trans communities (another lie).

Tuvel structures her argument more or less as follows: (1) We accept the following premises about trans people and the rights and dignity to which they are entitled; (2) we also accept the following premises about identities and identity change in general; (3) therefore, the common arguments against transracialism fail, and we should accept that there’s little apparent logically coherent reason to deny the possibility of genuine transracialism.

Anyone who has read an academic philosophy paper will be familiar with this sort of argument. The goal, often, is to provoke a little — to probe what we think and why we think it, and to highlight logical inconsistencies that might help us better understand our values and thought processes. This sort of article is abstract and laden with hypotheticals — the idea is to pull up one level from the real world and force people to grapple with principles and claims on their own merits, rather than — in the case of Dolezal — baser instincts like disgust and outrage. This is what many philosophers do.

Tuvel’s article rebuts a number of the arguments against transracialism, and it’s clear, throughout, that Tuvel herself is firmly in support of trans people and trans rights. Her argument is not that being transracial is the same as being transgender — rather, it’s “that similar arguments that support transgenderism support transracialism,” as she puts it in an important endnote we’ll return to. It’s clear, from the way Tuvel sets things up, that she’s prodding us to more carefully examine why we feel the way we do about Dolezal, not to question trans rights or trans identities.

Usually, an article like this, abstract and argumentatively complex as it is, wouldn’t attract all that much attention outside of its own academic subculture. But that isn’t what happened here — instead, Tuvel is now bearing the brunt of a massive internet witch-hunt, abetted in part by Hypatia’s refusal to stand up for her. The journal has already apologized for the article, despite the fact that it was approved through its normal editorial process, and Tuvel’s peers are busily wrecking her reputation by sharing all sorts of false claims about the article that don’t bear the scrutiny of even a single close read.

The biggest vehicle of misinformation about Tuvel’s articles comes from the “open letter to Hypatia” that has done a great deal to help spark the controversy. That letter has racked up hundreds of signatories within the academic community — the top names listed are Elise Springer of Wesleyan University, Alexis Shotwell of Carleton University (who is listed as the point of contact), Dilek Huseyinzadegan of Emory University, Lori Gruen of Wesleyan, and Shannon Winnubst of Ohio State University. (Update: As of the morning of May 3, all the names had been removed from the letter. A note at the top of it reads “We have now closed signatories for this letter in order to send it to the Editor and Associate Editors of Hypatia.”)

In the letter, the authors ask that the article be retracted on the grounds that its “continued availability causes further harm” to marginalized people. The authors then list five main reasons they think the article is so dangerously flawed it should be unpublished. . .

Singal goes on to point out that four five of those reasons are based on a total misreading of Tuvel’s article, whose main point is given above and by Singal in his second and third paragraph. (The other criticism is trivial.) He then rebuts each of the “reasons,” and goes on to show how Tuvel is being ripped to shreds, unjustly, by academics. She has even been accused of “perpetrating violence” and “enacting harm”

The letter’s authors, presumably Leftists, are doing all they can do demonize Tuvel for–what? None of the objections recognize that the transgenderism and transracialism are both based on people feeling that they’re different from how their external appearance has led society to categorize them. One is based on genitalia, the other skin color.  If a biological male feels that he is really a woman, why can’t a white person feel that they’re black? And regardless of which sex is “privileged,” people transition in both directions. But of course never underestimate Regressives’ tendency to reach a conclusion first (“white people have privilege and just can’t say they feel or are black”) and then find arguments to support it.

I could go on and on. This is a witch hunt. There has simply been an explosive amount of misinformation circulating online about what is and isn’t in Tuvel’s article, which few of her most vociferous critics appear to have even skimmed, based on their inability to accurately describe its contents. Because the right has seized on Rachel Dolezal as a target of gleeful ridicule, and as a means of making opportunistic arguments against the reality of the trans identity, a bunch of academics who really should know better are attributing to Tuvel arguments she never made, simply because she connected those two subjects in an academic article.

The Chronicle of Higher Education shows how the craven journal Hypatia apologized (you can see the journal’s reprehensible Facebook apology here, but I want to reproduce it because it so resembles the apologies of the accused during China’s Cultural Revolution: 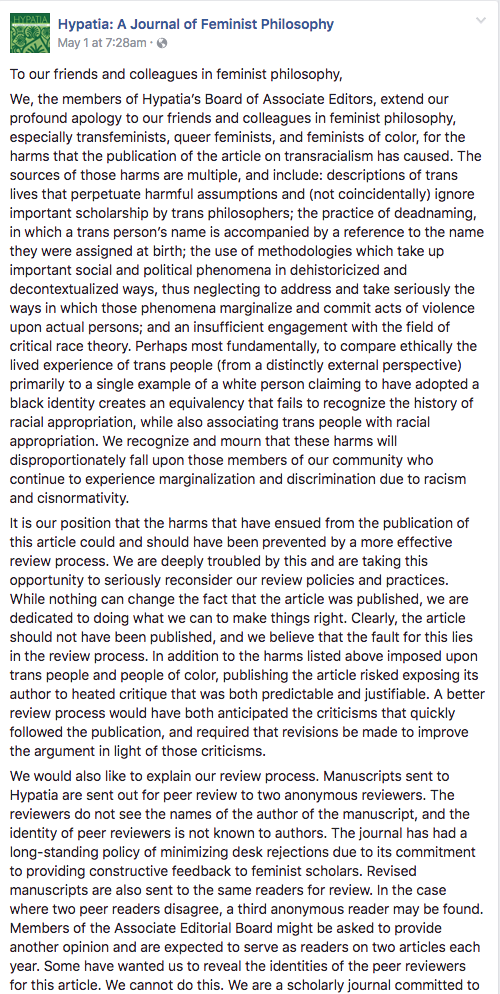 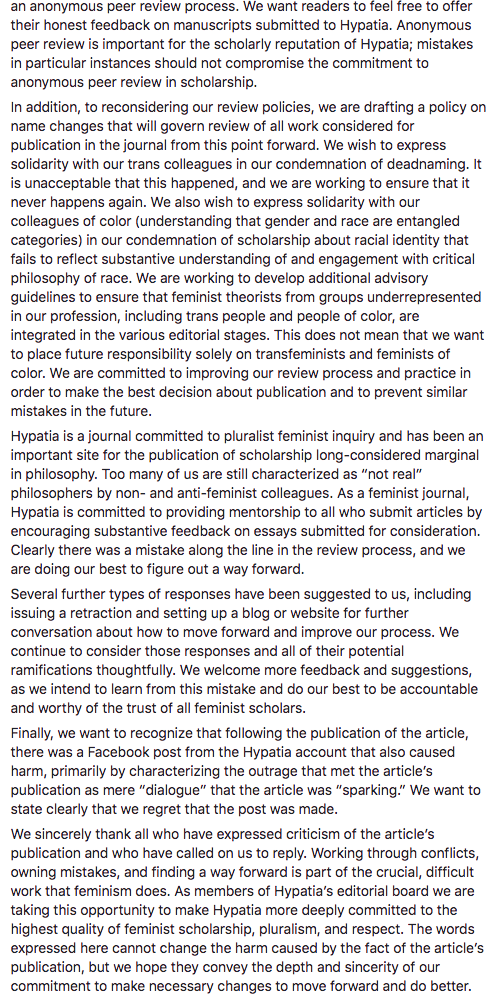 The article, ”In Defense of Transracialism,” by Rebecca Tuvel, an assistant professor of philosophy at Rhodes College, drew a significant backlash following its publication, in late March. The article discusses public perceptions of racial and gender transitions by comparing the former NAACP chapter head Rachel Dolezal’s desire to be seen as black with the celebrity Caitlyn Jenner’s public transition from male to female. [JAC: the article does far more than just draw a parallel!]

Since a backlash erupted on social media, more than 400 academics have signed an open letter to the editor of Hypatia calling for the article to be retracted. “Our concerns reach beyond mere scholarly disagreement; we can only conclude that there has been a failure in the review process, and one that painfully reflects a lack of engagement beyond white and cisgender privilege,” the letter says.

The journal’s Facebook apology responded to those concerns by saying that it would be looking closely at its editorial processes to make sure they are more inclusive of transfeminists and feminists of color, whom the journal said had been particularly harmed by the article. The journal also apologized for its initial response to the backlash, saying that an earlier Facebook post had “also caused harm, primarily by characterizing the outrage that met the article’s publication as mere ‘dialogue’ that the article was ‘sparking.’ We want to state clearly that we regret that the post was made.”

Tuvel has responded to the criticism (see here), apologizes for one or two items, like “deadnaming” Caitlyn Jenner (giving her pre-transition name), but ends in this way:

Calls for intellectual engagement are also being shut down because they “dignify” the article. If this is considered beyond the pale as a response to a controversial piece of writing, then critical thought is in danger. I have never been under the illusion that this article is immune from critique. But the last place one expects to find such calls for censorship rather than discussion is amongst philosophers.

Indeed. Philosopher Russell Blackford has been defending Tuvel on Twitter and criticizing the witch hunt in a series of tweets, calling attention to others’ defenses of Tuvel. I am proud to call him my friend. Read the following from bottom up, in chronological order: 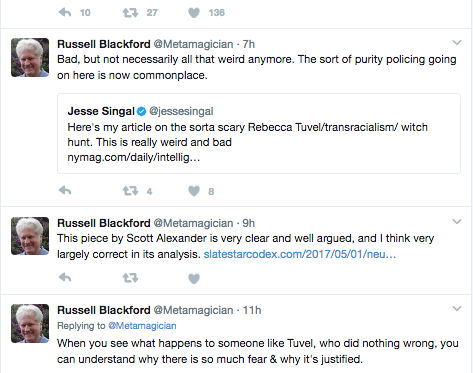 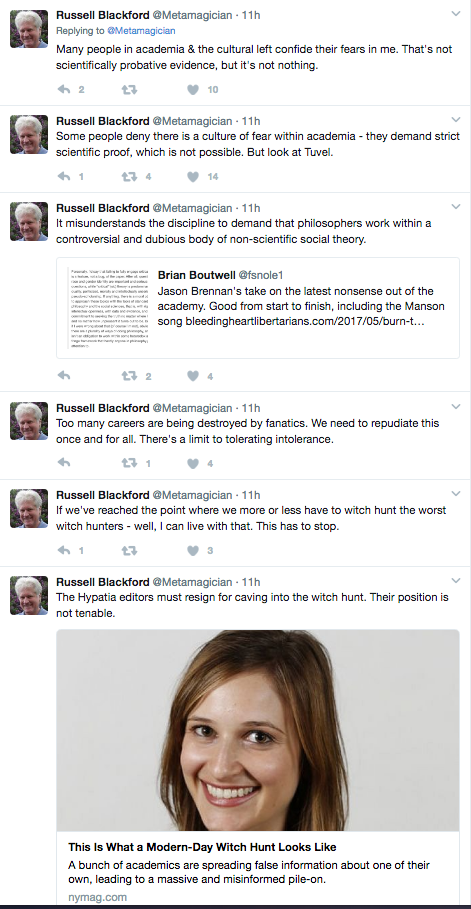 Hypatia should be mocked and vilified for its cowardice, as should those academics who went after tuvel because her Gendankenartikel violated the Regressive Left’s norms of purity. These are not students attacking Tuvel—they are professional academics, and I have nothing but contempt for them. (Remember, today’s students are tomorrow’s professors.) I am appalled, but not surprised. I’ll end with Singal’s words:

. . . what’s disturbing here is how many hundreds of academics signed onto and helped spread utterly false claims about one of their colleagues, and the extent to which Hypatia, faced with such outrage, didn’t even bother trying to sift legitimate critiques from frankly made-up ones. A huge number of people who haven’t read Tuvel’s article now believe, on the basis of that trumped-up open letter and unfounded claims of “violence,” that it is so deeply transphobic it warranted an unusual apology from the journal that published it.

We should want academics to write about complicated, difficult, hot-button issues, including identity. Online pile-ons cannot, however righteous they feel, dictate journals’ publication policies and how they treat their authors and articles. It’s really disturbing to watch this sort of thing unfold in real time — there’s such a stark disconnect between what Tuvel wrote and what she is purported to have written. This whole episode should worry anybody who cares about academia’s ability to engage in difficult issues at a time when outrage can spread faster than ever before.

92 thoughts on “A reprehensible witch hunt in academia: feminist philosopher equates the defenses of transgenderism and of transracialism—and gets crucified”