A new scientific paper from the Proceedings of the Royal Society Series B (first screenshot below) tells a rather complex story that I’ll deliberately simplify to save space. The paper is behind a paywall, but a pdf may be found via judicious inquiry, and the reference is at the bottom.

Three groups of birds have evolved a remarkable feature: the ability to remotely sense prey (i.e., detecting prey without touching them) by sticking their bills in the ground and sensing vibrations. These groups are the kiwis, the ibises, and some shorebirds. The detection can occur either through the direct sensing of vibrations of prey movement, or the reflection of sound waves off hard-shelled prey as the bird sticks its beak into the ground. This feature is called “remote touch.”

It turns out that the bill tips of “remote touch” birds are pitted with small depressions that contain cells called “Herbst corpuscles”, which are the motion-detecting organs. aThese birds also have an expanded area of the brain that is used to process the extremely important touch signals.

Other species have different ways of using their bills to detect prey by touch. Ducks and geese have a bony organ at the tip of their bills that also have pits with Herbst corpuscles, but they are organized differently, with mechanoreceptors beside them. These are what ducks use in “dabbling”—turning their butts up and sticking their beak into the dirt or sediments to forage. Finally, parrots have a different kind of bill-tip organ with receptors not located in the bone.

Below are photos from the paper showing the different types of bill tips. The authors also examined skulls of hundreds of living species and dissected beak tissue from many to see if there were Herbst cells associated with the bill pits.

First, a bird without remote sensing, as with most birds. It’s a kelp gull (Larus dominicus). There are a few pits at the tip of the bill, but soft tissue analysis showed no receptor cells. It does not forage by touch.

Here are two birds with remote sensing. First, the hadeda ibis (Bostrychia hagedash). Note the highly pitted bill tip organ (enlarged). It also has the Herbst cells as well as an enlarged bit of the brain for detecting touch. (This bird, like all other birds save the ratites and tinamous, falls into the large group of species called neognaths.)

Ditto for the kiwi, which falls into the other group of birds, the paleognaths, a small group that contains only the large flightless birds or ratites (emus, ostriches, etc.) plus the tinamous, which can fly, but not well. Its remote sensing organ with Herbst cells is located at the very tip of its long bill. Indeed, the ratio of bill length to skull size is one of several keys to diagnosing whether these birds have remote sensing. 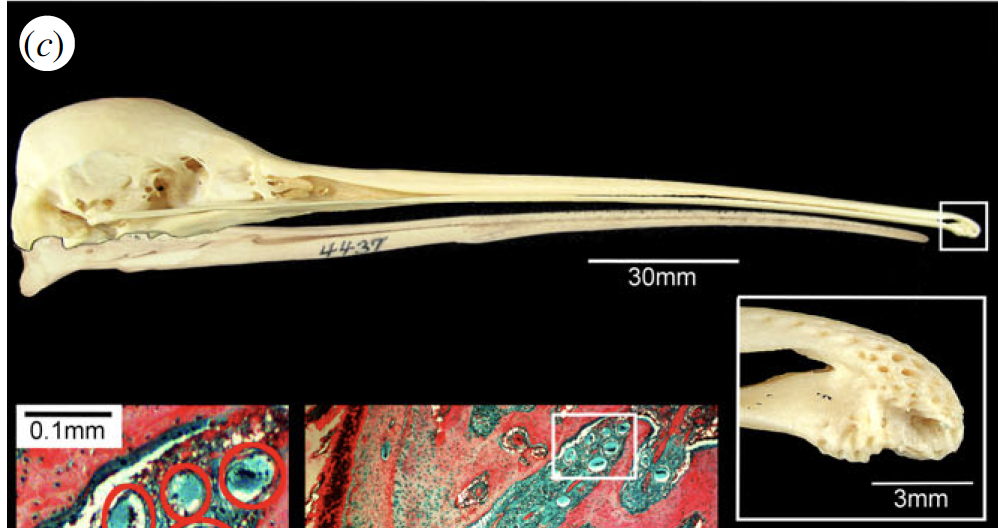 Finally, the tinamou, a paleognath that= has a remote-sensing organ containing the pits but no Herbst corpuscles in them. But this species doesn’t feed by probing the ground. Other ratites, like the ostrich and emu, also have a pit-studded bill, but no vibration-detecting cells. The pits seem to be a leftover from an ancestor which had pits that were useful because they contained vibration-detecting cells. In other words, they’re a vestigial trait.

The other ratites also lack the expanded brain regions for processing information from the touch receptors. This makes sense, for while it may not cost much to retain some pits in the bill when you don’t need them, brain tissue is metabolically expensive, and if you’re not using it it would pay to divert those resources to other functions that would help you reproduce.

As I said, the presence of the pits in birds that don’t use them suggest that this trait is a vestigial trait carried over from an ancestor.  One can distinguish the remote-touch birds from other species by a combination of bill length/skull size ratio, number of pits, and spacing between the pits.

But which ancestor? It turns out that we have fossil skulls of ancient extinct birds, the lithornithids, which are very early paleognaths. Although soft tissue wasn’t available for these birds, some of the species show the mechano-sensing organ—as evidenced from the number and spacing of the pits, as well as the bill/skull ratios characterized by remote foragers. Here’s a photo of the two lithornithid skulls; captions under the photos are from the paper (click to enlarge photo).

The conclusion is that putative ancestors of the paleognaths were remote-touch-sensing species. The fact that living paleognaths like emus and tinamous still retain the pits suggests that this nonfunctional “organ” is a useless remnant of a trait inherited by all paleognaths from a lithornithid ancestor.  Indeed, the authors think that the ancestor of all birds might have been a remote-sensing prober (my emphasis):

Our analyses corroborate that the basal palaeognaths, the small, volant lithornithids, had a tactile bony bill-tip organ enabling them to use remote touch to locate buried invertebrate prey items. This finding, combined with our understanding of the evolution of the lithornithids, suggests a Cretaceous origin of the remote-touch sensory system in modern birds before the palaeognath–neognath split.

As for why among living paleognaths only the kiwi has a functional touch organ when it was present in an extinct ancestor, that could be explained by either of two scenarios. The first involves, the organ’s loss in a more recent ancestral species and then the re-acquisition of the organ in just the kiwi lineage. The second possibility is that the kiwi kept an ancestral remote-probing organ while all the other paleognaths lost it. The authors are unable to distinguish between these two scenarios.

What about the neognaths that have remote-sensing organs, like the ibis or shorebirds? Did they retain the ancestral touch organ while all other neognaths—the vast majority of living birds—lost it? Probably not; as the authors say, this is an independent case of evolution.

What is even more fascinating is the possibility that this ability to detect prey remotely may have been present in the reptilian ancestors of birds, which may scientists think are the theropod dinosaurs:

Interestingly, there is increasing evidence that some non-avian theropods had specialized sensory structures located on the distal portion of their rostra, based on a high degree of external foramina/pitting preserved on their mandibles. We speculate that perhaps such sensitive snouts in non-avian theropods may have been precursors to the evolution of remote touch in their avian relatives.

It’s interesting to note that alligators and crocodiles also have touch-sensitive “dome receptors” in their upper jaws, also associated with pitting in the bones.  The archosaurs are a group of early reptiles ancestral to both birds and crocodilians, and maybe the receptors we see in crocs and gators are related, in some way, to the pits in the beak of the kiwi.

This is all speculative, but what seems pretty solid is that the bill pitting and useless “touch organs” in non-kiwi ratites and tinamous are vestigial remnants of a functional organ in an ancient ancestor. And that’s evidence for evolution.

18 thoughts on “A vestigial trait of birds that may have been functional in ancestors: remote-sensing of vibrations in the bill (still active in the kiwi)”