A letter to the editor appeared in the latest issue of Nature, decrying the political uniformity of scientists (click on screenshot below to access though I’ve put up the whole thing). And the link to the Nature poll described in the letter’s  first line is here, but the survey was not of Americans but of Nature readers from throughout the world.

However, there’s no doubt that, among American scientists, Democrats still greatly outnumber Republicans. The latest data I can find are in a 2009 Pew poll showing that not only are American scientists mostly liberal, but that there’s a huge disparity between the politics of scientists and of the American public in general. I suspect that, given what’s happened under Trump, this disparity has only increased. The data in 2009: 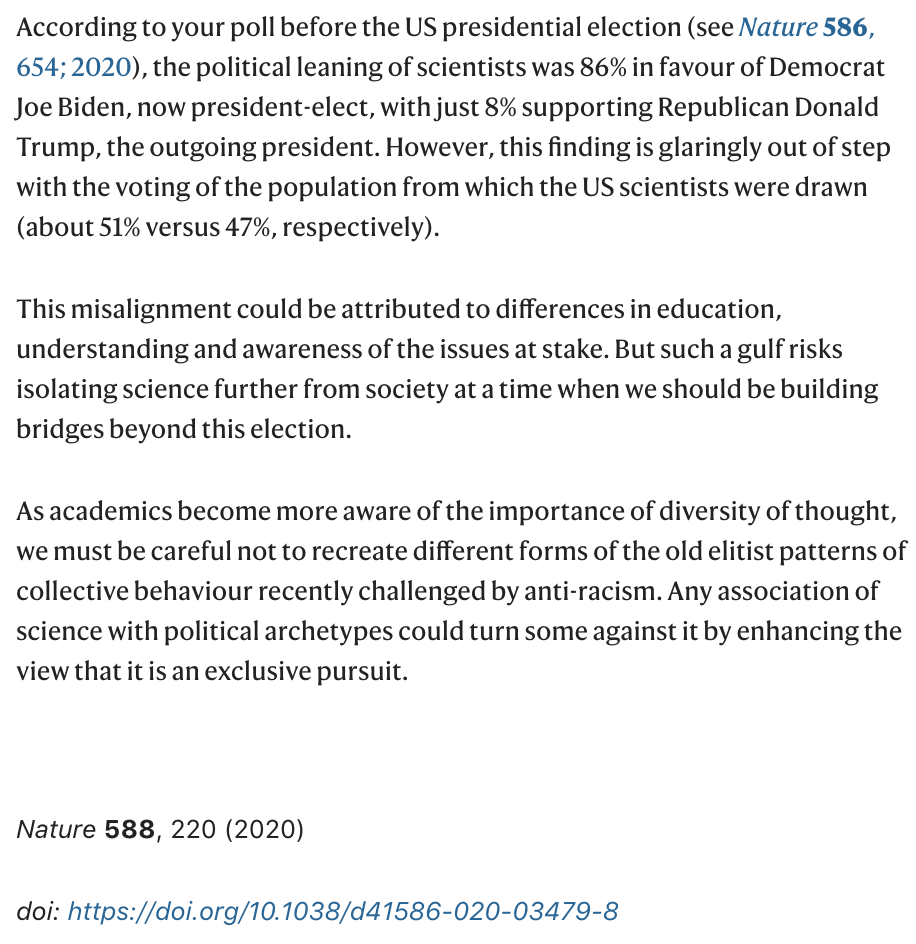 Now Dr. Meso is mistaken that the Nature poll was of “US scientists”, but it doesn’t matter, for the “misalignment” he describes is still true. As an academic, I have long been aware of this, for the disparity exists not just in science, but in academia as a whole.

Meso’s implicit argument that we need to increase political diversity doesn’t carry near as much weight as an argument for greater gender and ethnic diversity, for there’s not a good argument that Republicans were oppressed in the past, nor that there is discrimination against Republican students being accepted to grad school or being hired as professors—at least in science. I’ve been on many hiring and student-acceptance committees, and not once have I ever heard of a candidate being touted or dissed because of their politics. Indeed, we never even know their politics! (This may not hold for faculty in areas like economics or sociology.) And I’ve never heard of a scientist being denied promotion or tenure on the grounds of their politics.

So it’s hard to make an argument that the dearth of Republicans in American science is due to bias or discrimination. Nor does the ideological slant seem likely to affect science: as I read somewhere (but can’t lay my hands on the reference), scientists’ politics don’t affect the nature or quality of their research.

Why the disparity between scientists and the public, then, if it’s not bigotry? Well, perhaps it’s preference.

For reasons we can speculate about, perhaps those with a conservative bent are less likely to go into science, or remain in science if they start studying this. Perhaps those with a liberal bent are more attracted to the empirical method and the techniques of science. I have no idea if this is right, but feel free to speculate.   But I’ll make one point: if people think that the differential representation is due to preference rather than bias, and it’s a preference based on political affiliation (which may be correlated with other traits), why are we so eager to assume that other differential representations, like those involving gender or ethnicity, are based solely on bias and bigotry rather than preference? As we know, this kind of representation is automatically assumed to be based on prejudice, but I’ve always said that we can’t assume that without the needed research.

Finally, is Meso right in raising the alarm that the Democratic “elitism” of American scientists could turn other Americans—many of whom are Republican—against science or against going into science? (He conflates “judging science” with “going into science” in his final paragraph.) If he were right, this in itself would be a form of preference, but could also involve bigotry if conservatives sense that scientists don’t like their politics.  And yes, Republicans are more anti-science than Democrats, though the difference has been exaggerated, but not to the extent that would explain the differential representation in science. To me, it seems more likely that the disparity is based on a preference connected to political affiliation, but that’s just a guess.

Finally, Meso’s conclusion—that liberalism in scientists turns others against science and against going into science, presumes that the public actually knows how liberal scientists are. But they don’t seem to, at least according to that Pew report:

If there’s no evidence in science of bias against Republican scientists or students, then there is no need to engage in affirmative action to bring them on board—unless they somehow bring a scientific point of view absent among more liberal scientists. But I can’t see one. (It’s not that evident amongst ethnic or gender groups, either.) But the reason I’m in favor of affirmative action is not so much to bring a diversity of ideas as to act as a form of reparations for those who were denied equal opportunity. And the reparations view, while holding for women and people of color, doesn’t seem to hold for conservatives.

But my dislike of affirmative action for Republicans in science doesn’t hold for college students, for I think ideological and political diversity is an innate good among undergraduates, as it stimulates discussion and exposes students to other ways of thinking. So while I can’t support a case for “affirmative action” for more Republicans in science, I can do so for college students. As for professors outside of science, I’m not so sure. It’s useful for students to be exposed to various political views, or lines of thought, from their professors as well. I can’t see hiring professors because they’re Republicans, but I can see making an effort to incorporate conservative points of view into academic departments.  Since we scientists are supposed to keep our politics out of the classroom, though, we don’t need to make this effort.

140 thoughts on “American scientists are mostly Democrats, with almost no Republicans. Is this lack of diversity a problem?”