Two of my favorite Brits, Nick Cohen and Stephen Fry, have both published pieces—in The Spectator and Sunday Times respectively decrying Cambridge University’s speech code and describing new attempts to reform it. You can access Cohen’s piece by clicking on the screenshot below, while Fry’s is largely behind a paywall. (Judicious inquiry might yield you a copy of Fry’s article.) 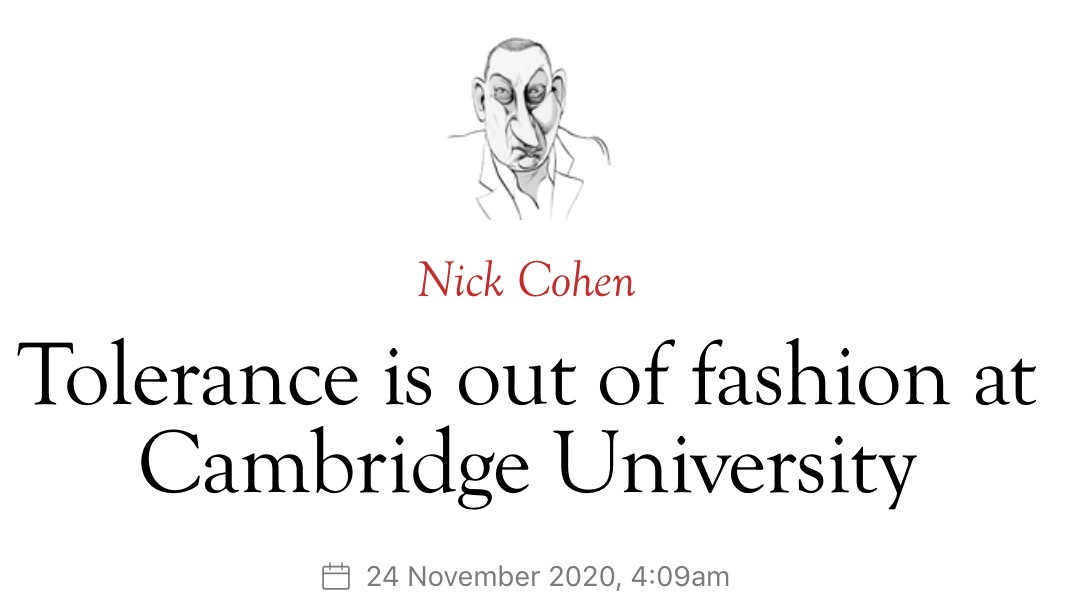 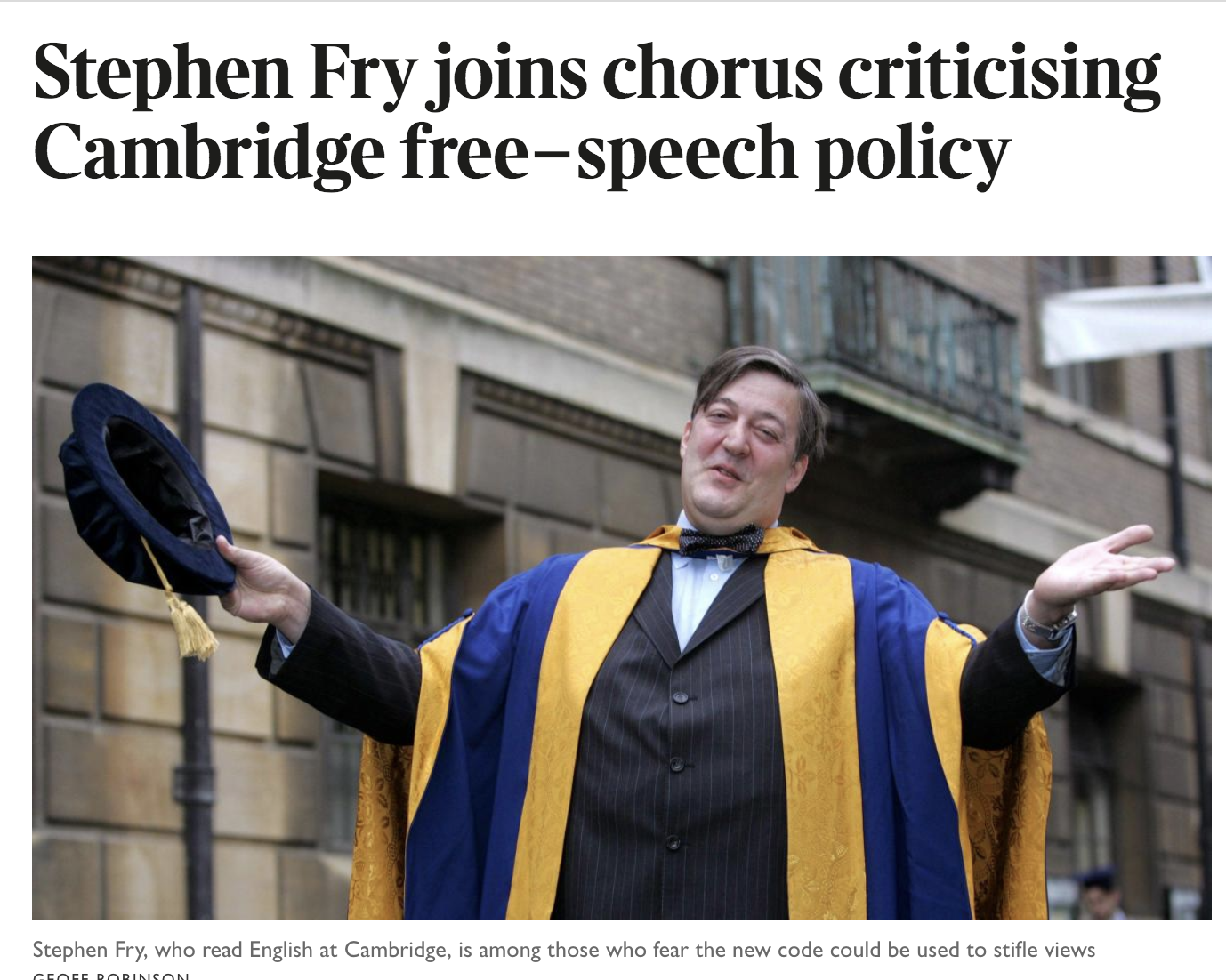 What happened is that in March, Cambridge issued what Cohen calls a “woozy and authoritarian” update on their freedom-of-speech policy, which you can read here.

There are several problems with that statement. The most pressing, and one that has been subject to pushback from Cohen, Fry, and a group of Cambridge academics who are proposing a revision of the update, is that the demand should be not for respect for opposing views, but “tolerance” for them. Emphasis in the Cambridge statement below is mine:

Both Cohen and Fry glom onto this statement, as “tolerance” is what we need, not “respect” for opinions that may be odious. Does one “respect” the opinion that female genital mutilation is okay, or that Muslims should be banned from immigrating? Or that vaccinations are dangerous and there’s no global warming? No, one tolerates the views and their proponents insofar as one argues with them, civilly but also passionately. But such views deserve no respect.

At its heart [the skirmish between the statement and its critics] is a distinction with a difference worth fighting over: the line between ‘tolerance’ and ‘respect’. Tolerance is an old liberal virtue that is tougher than it looks. After the devastation brought by the wars of religion, the early Enlightenment decided, in the words of John Locke, that ‘the civil magistrate has no jurisdiction over souls’.

To tolerate one’s opponents meant that you did not ban them or punish them for their religious or political beliefs. But that was all. You remained free to offend and challenge them. You most certainly had no obligation to ‘respect’ ideas you regarded as ignorant or dangerous or both.

The demand for respect is the demand to bite your tongue and not to argue against what you believe to be wrong. To respect people, groups, ideologies or institutions is to bow down before them, accept them on their own terms, and refrain from criticism. No wonder gangsters demand it.

As Ross Anderson, professor of security engineering at Cambridge, says, in a free university, no one has the ‘right to demand that we be respectful towards all beliefs and practices: on the contrary, we have a right, in some cases practically a duty, to satirise and to mock them’.

I’m glad Cohen mentioned mockery, a powerful weapon against nonsense, and which is clearly not respectful but sometimes better than simple counterargument. (Indeed, mockery could be seen as a “counterargument” that emphasizes the silliness of your opponents’ arguments.)

A demand for respect is like a demand for a laugh, or demands for love, loyalty and allegiance. They cannot be given if not felt.

There are many opinions, positions and points of view which I find I do not and cannot respect. That is surely true for all us.

Even if someone were to pull out a gun, point it at my head and demand respect for their opinion, I could not with any honesty offer it. Fear and dread would certainly elicit a trembling acquiescence — but real respect? That cannot be supplied to order. It comes from somewhere else.

To be forced to feel other than we do is manifestly an impossibility. Therefore what is really being asked is a pretence, a display of lip-service, which in a university whose reputation is founded on empirical and rational inquiry, open argument and free thought, is surely inimical.

Doubtless we can all hope for respectful attitudes in matters of debate and interpersonal exchange — much as we hope for friendly manners in all circumstances — but to burn respect into statutes and protocols is absurd, or worse. Such an impulse tips over the line into thought control.

A free mind is obliged to respect only the truth. There is so much passion and distress fomenting the debate on campus freedom and academic discussion that decisions are made and policies implemented on the basis of fear rather than reason or sense.

There are other issues as well, and a big group of academics has forced Cambridge to take a faculty vote on three proposed amendments of the free-speech statement (see proposed revisions #1, #2, and #3). All these proposed changes are sensible and salubrious. Voting will end on December 7.

There’s one more statement that stuck out to me: the reasons why speakers can be deplatformed:

The University will not unreasonably either refuse to allow events to be held on its premises or impose special conditions upon the running of those events. The lawful expression of controversial or unpopular views will not in itself constitute reasonable grounds for withholding permission for a meeting or event. Grounds for refusal, or the imposition of special conditions, would include, but are not limited to, a reasonable belief that the meeting or event is likely to:

•include the expression of views that risk drawing people into terrorism or are the views of proscribed groups or organisations;

•incite others to commit violent or otherwise unlawful acts;

•include the expression of views that are unlawful because they are discriminatory or harassing;

•pose a genuine risk to the welfare, health, or safety of members, students, or employees of the University, to visitors, or to the general public; or

•give rise to a breach of the peace or pose an unacceptable security risk.

The last three points in particular look to me like an especially slippery slope, which the critics, when proposing their revision, single out as “restrictive, vague, and now illegal”. Even the proscription against “drawing people into terrorism” is problematic. Does praise for Hamas count like that?

At the end of his piece, Cohen calls out both the American Right and Left and warns of another slippery slope: that of “respect”:

We are in our own religious wars now. The US right is so convinced Democrats are infidels it cannot admit the truth that it lost an election. The version of the left formed by the social justice movement believes in shaming and banning with the fervour of a pre-Enlightenment Calvinist. You can see why tolerance is out of fashion at Cambridge. The danger lies in the promotion of the slippery concept of respect by a university, which once insisted on precision. When I asked Arif Ahmed why he was mobilising academics against respect, he quoted the argument of the Cambridge philosopher Simon Blackburn: ‘The word seems to span a spectrum, from simply not interfering, passing by on the other side, through admiration, right up to reverence and deference.’

Its multiple meanings suited ideologues wanting to impose conformity. ‘People might start out by insisting on respect in the minimal sense, and in a generally liberal world they may not find it too difficult to obtain it. But then what we might call respect creep sets in, where the request for minimal toleration turns into a demand for more substantial respect, such as fellow-feeling, or esteem, and finally deference and reverence.’ At the extreme it reaches the terminus of, ‘unless you let me take over your mind and your life, you are not showing proper respect for my religious or ideological convictions.’