The skunk is protected from predators by its noxious (but non-lethal) squirts from its butt, and it’s evolved a distinctive “aposematic” warning pattern that serves to warn predators to “stay away from me” (predator avoidance can be either learned or genetic). Like the skunk, the crested rat doesn’t need to move quickly, for it has little to fear from predators.

Why does this rat look and act like a skunk? It is in fact a poisonous mammal, and the world’s only poisonous rodent. Some shews, which aren’t rodents, are venomous, but that venom is made by the shrew itself.

The crested rat isn’t inherently poisonous: it becomes so by applying toxic plant compounds to its fur: compounds it gets from chewing the bark of the “poison arrow tree” Acokanthera schimperi (locals use it to make poison arrows, as the poison is stable for decades), and then “anointing itself”, spitting the toxic juice onto certain parts of its coat that it displays when predators are around. Those poisons, which are powerful cardenolides, have killed many a dog, and those dogs who survive subsequently don’t go near the rat, showing that the pattern is easily learned by predators. (Other potential predators of the rat include honey badgers, jackals, servals, hyenas, and leopards.)  Apparently the crested rat is immune to the poison, as it regularly chews on the bark.

It’s a large, long-lived rat, weighing up to a kilogram. Here’s what it looks like: 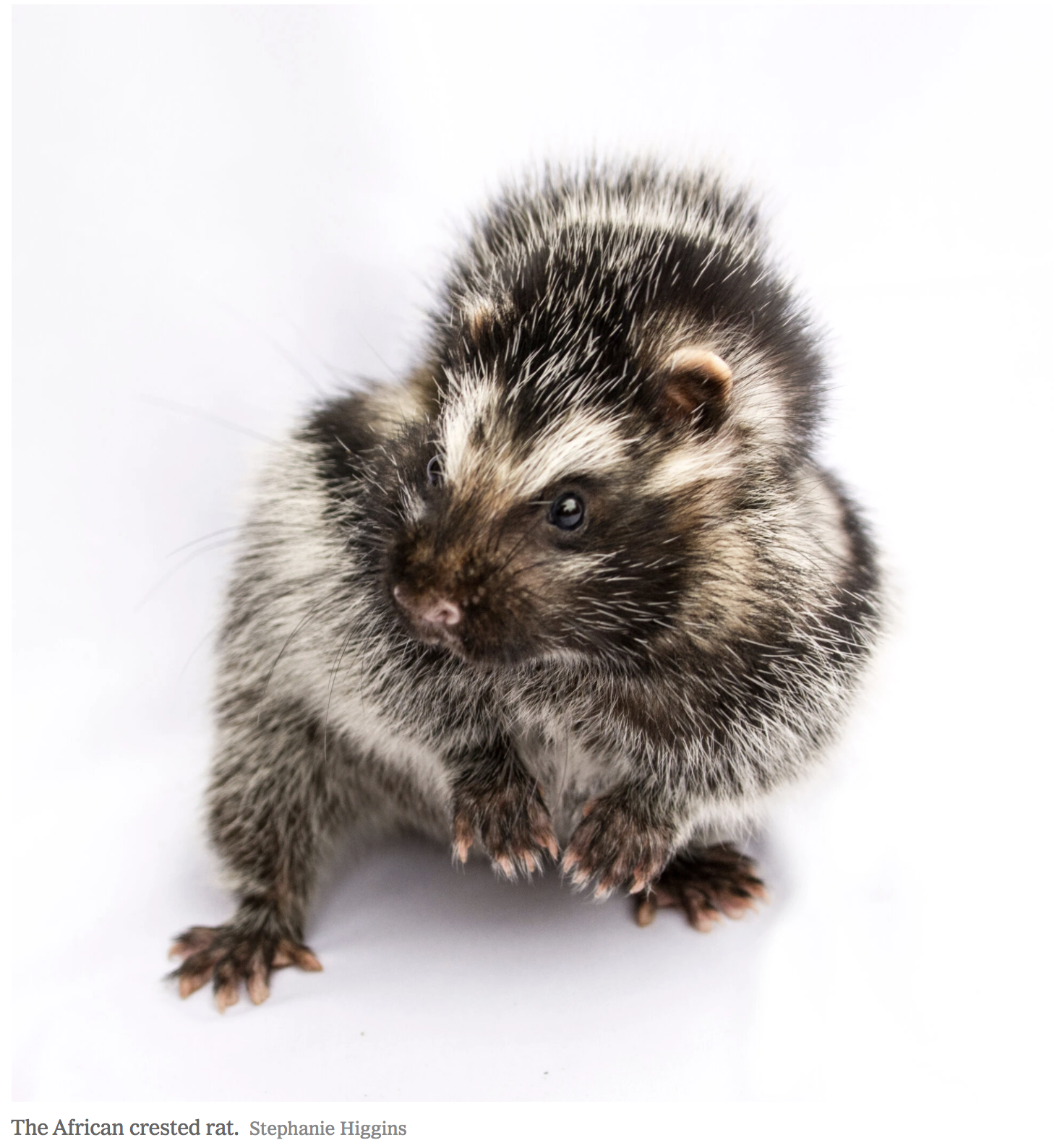 Here’s the tree, which has poisonous leaves and fruits as well (the rodents appear to use the bark): 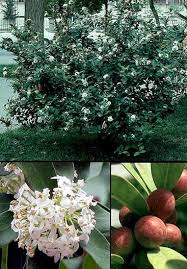 Here’s the special line of brown hairs that are displayed and erected when predators are around or the rat is disturbed: 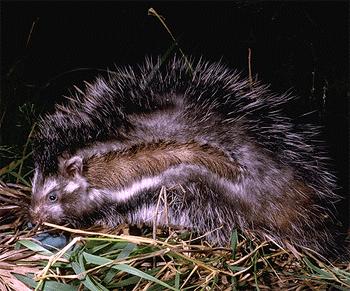 Another view from the paper below (see also the “Trilobite” article from the New York Times, which provided the picture at the top). Note that the hairs in the top photo are erected, like those of a fighting cat, and aren’t visible in the “normal” undisturbed rat shown in the photo at the top of this post. The caption of the pictures below (from the paper) are “An immature Lophiomys imhausi displaying specialized hairs and warning coloration (A) and the same individual (center) with an adult male (top right), and female (top left), from the same trap location. The juvenile is being groomed by the male (B). 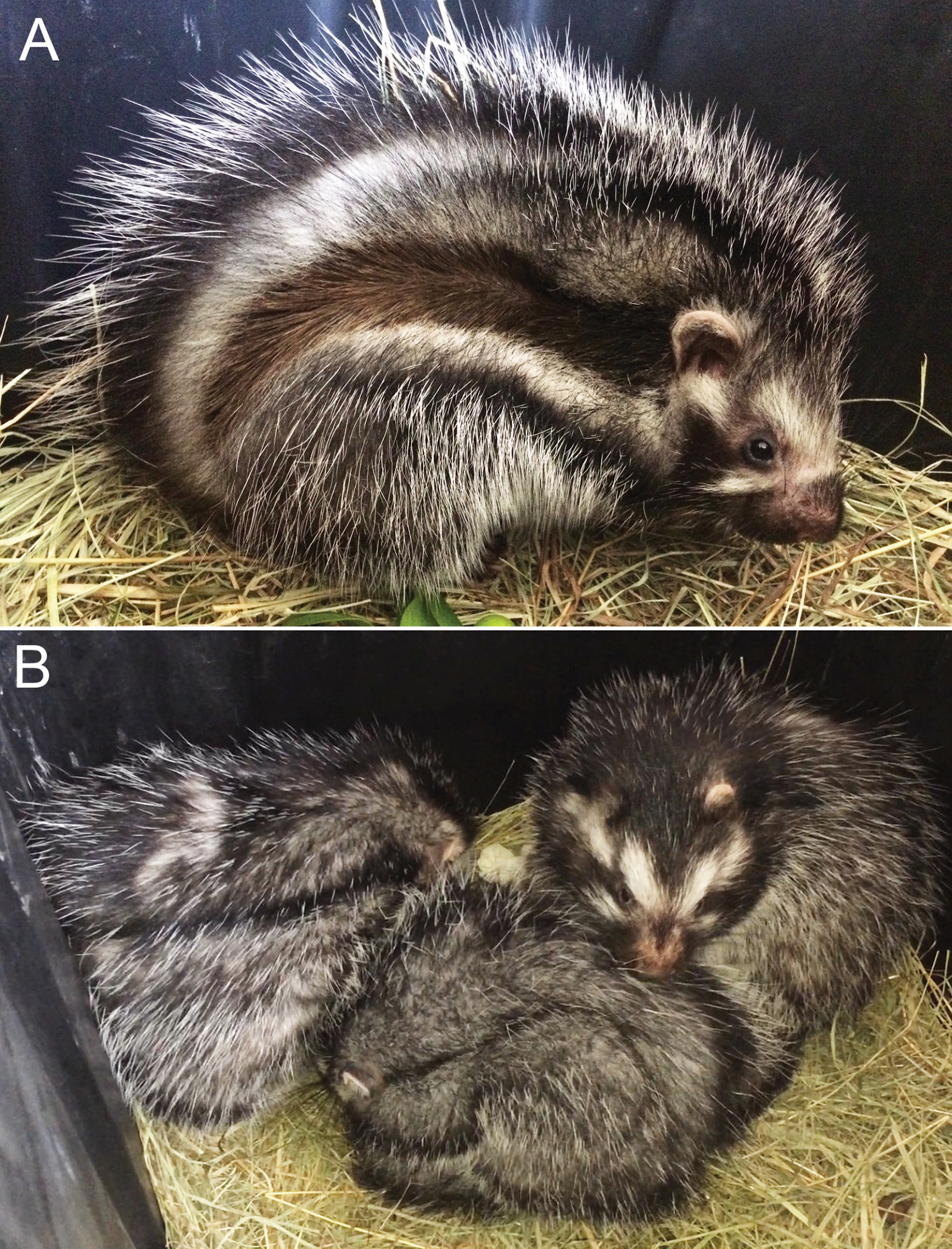 Finally, the brown stripe is made of special porous hairs that absorb the toxins, which is why they’re displayed, for this is the part of the rat’s coat that will kill or sicken attacking predators (picture from the NYT): 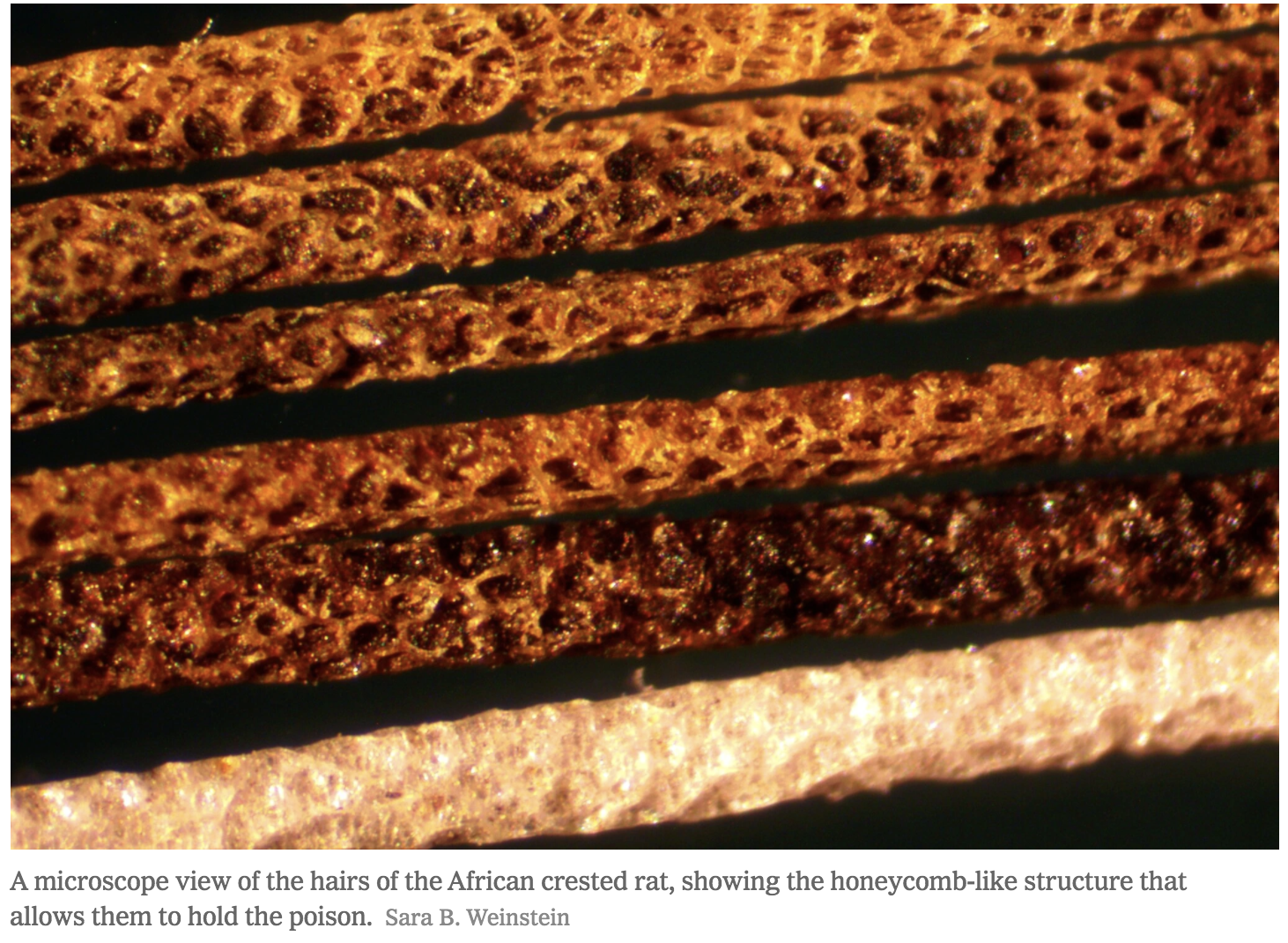 Here’s a video showing the rat chewing on A. schimperi bark and spreading it on its fur:

Another video showing how absorbent the specialized fur is:

The paper below (click on screenshot to access) is from the Journal of Mammalogy, and the facts above have been known for some time. What this paper does is elucidate some new things about the social behavior of the rats, and provide observations of its grooming behavior, as well as determining whether chewing the plant and applying the toxin to its fur affects the animal’s behavior (it doesn’t). The pdf is here, and the full reference is at the bottom of this post:

Besides providing a good summary of the fragmentary literature on L. imhausi, the paper finds out this stuff:

a). The rat appears social and is probably monogamous. Monogamy is rare for a rodent, and although this is only inferred for this species by repeatedly seeing pairs of crested rats at camera traps or seeing interactions between males and females in captivity, other features of the species, like its large body size, long life, low reproductive rate, and females who are more aggressive than males, are often characteristic of monogamy in mammals.

b.) The species is dense. The authors estimate 4-15 individuals per square kilometer, which is pretty dense. It lives in riparian forest (along rivers), and although the species is labeled “of least concern” by conservationists, its habitat is disappearing and is also patchy, so it may one day be threatened.

c.) Application of the toxins to the fur is sporadic (at least in captivity). Only half of the 22 rats captured and observed, all given fruits, leaves, and bark of the poison arrow tree, applied toxins to their fur. This is no puzzle to me, though it concerns the authors. I suspect it’s because, as the authors suggest, the poisons are stable and long-lived (for decades!), and rats don’t need to keep applying bark juice to their fur constantly.

All of the captive rats got the toxins from chewing bark while ignoring the other bits of the tree.  Here’s a photo of a rat chewing bark (A) and anointing its fur after chewing (B): 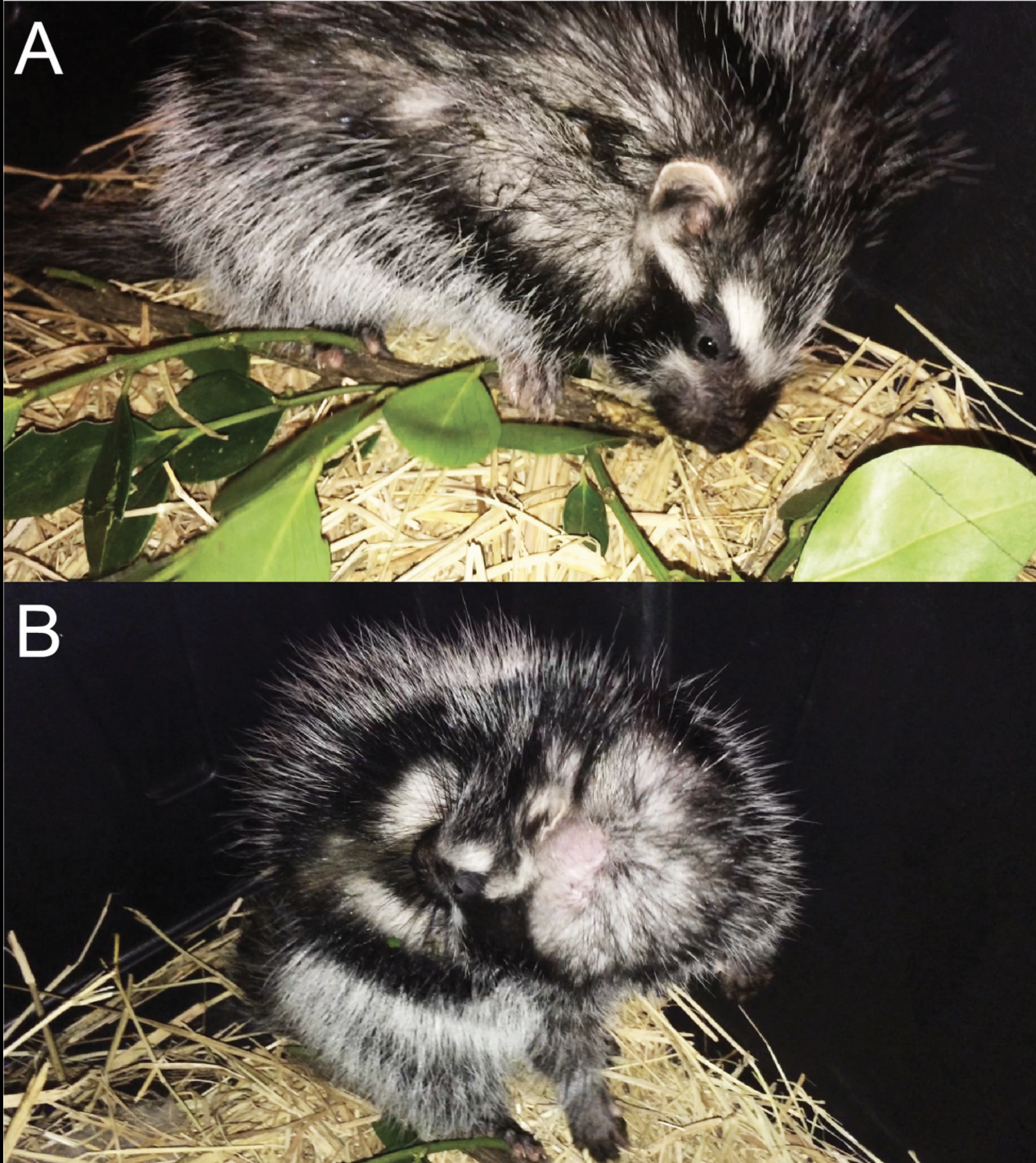 So we know a bit more about this species, and although much of what is described in the paper (and in the NYT article) was known before, it wasn’t studied systematically. I for one was unaware of this bizarre rodent. Its existence raises several questions.

Is the chewing and anointing behavior learned or evolved? The authors didn’t test this—or even raise the question—but given that the rats are born with the specialized fur that absorb the poison, I suspect that the chewing-and-anointing behavior is hard-wired. That could be tested by hand-raising newborn crested rats and seeing if they perform the behavior in captivity. If they do, it’s instinctive.

How did the evolution of this behavior evolve? Was the rat immune to the poison from the outset? Since they don’t ingest the bark, how did this whole thing get started? Did a rat chew on some bark, find it unpalatable, and then wipe its mouth on its fur? Such behavior could of course be subject to natural selection, as rats who did this would be less likely from the outset to be eaten by predators.

Once the rat had evolved toxicity, the evolution of aposematic coloration would follow. (The coloration could not evolve before the toxicity-inducing behaviors, as it would make the rat more visible and more likely to be eaten, as it would have no protection.) This is a fairly straightforward evolutionary process, as toxic rats that were a bit more conspiculous would be more easily recognized by predators that had encountered them before, and thus less likely to be attacked more than once by the same predator. Other predators, however, would have to learn one by one—unless (and this is sometimes the case) the predators themselves evolved an innate avoidance to the aposematic black-and-white pattern. This too could be tested by exposing naive predators—ones that had never encountered a crested rat—to one of those rats, and seeing if they instinctively shy away. That is research for the future, and is certainly feasible. While the mechanistic questions are largely answered, the evolutionary questions still dangle tantalizingly before us.