In a new ruling, the U.S. Supreme Court overturned New York Governor Andrew Cuomo’s limitation of congregation sizes in churches during the pandemic.  The ruling was split 5-4, with new Justice Amy Coney Barrett voting with the conservative majority—affirming the side of the Roman Catholic Church, which brought the suit—while Chief Justice Roberts voted with the liberals. (Had RBG been alive, the vote would have been 5-4 the other way.)  Beside the unsigned majority opinion, there are separate concurring opinions by Justices Gorsuch and Kavanaugh, while there are dissenting opinions by Roberts, Breyer, Kagan, and Sotomayor in various combinations.

While the judgment affirmed that Cuomo’s order violated the First-Amendment guarantee of freedom of religion, one shouldn’t assume that the decision was purely one of religious conservatism, for this was a tough call.  You can read the opinion below (the unsigned majority take is short), or read the New York Times article about the decision (click on both screenshots below). 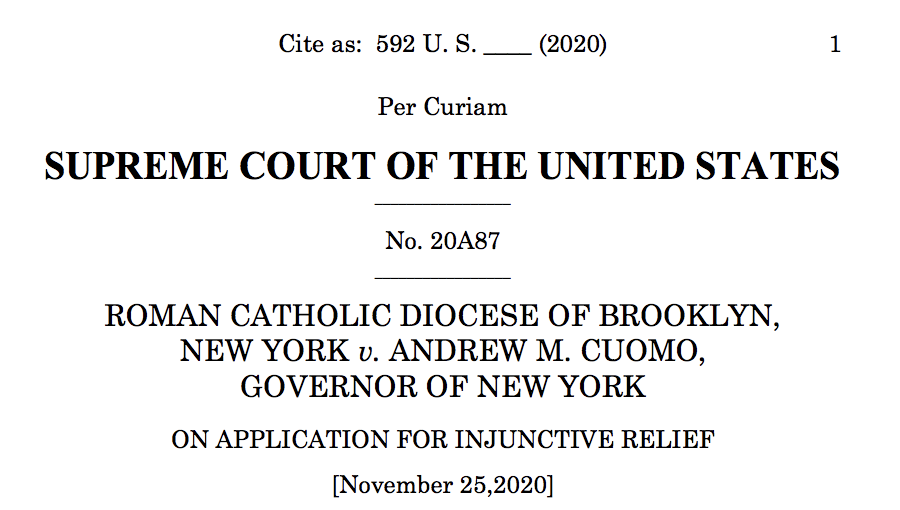 This ruling overturns two lower-court decisions affirming Cuomo’s decision to force churches to have 10 or fewer congregants during the “red-zone” phase of the pandemic.  One of the reasons the majority overturned this restriction (which has since been rescinded!) is that the numerical restriction was not imposed on businesses other than churches. Hence, one could construe that this violates the First Amendments “free exercise” provision by discriminating against churches.

From the majority decision:

In a red zone, while a synagogue or church may not admit more than 10 persons, businesses categorized as “essential” may admit as many people as they wish. And the list of “essential” businesses includes things such as acupuncture facilities, camp grounds, garages, as well as many whose services are not limited to those that can be regarded as essential, such as all plants manufacturing chemicals and microelectronics and all transportation facilities. See New York State, Empire State Development, Guidance for Determining Whether a Business Enterprise is Subject to a Workforce Reduction Under Recent Executive Orders, https://esd.ny.gov/guidance-executive-order-2026. The disparate treatment is even more striking in an orange zone.  While attendance at houses of worship is limited to 25 persons, even non-essential businesses may decide for themselves how many persons to admit.

Irreparable harm. There can be no question that the challenged restrictions, if enforced, will cause irreparable harm. “The loss of First Amendment freedoms, for even minimal periods of time, unquestionably constitutes irreparable injury.” Elrod v. Burns, 427 U. S. 347, 373 (1976) (plurality opinion). If only 10 people are admitted to each service, the great majority of those who wish to attend Masson Sunday or services in a synagogue on Shabbat will be barred. And while those who are shut out may in some instances be able to watch services on television, such remote viewing is not the same as personal attendance. Catholics who watch a Mass at home cannot receive communion, and there are important religious traditions in the Orthodox Jewish faith that require personal attendance. App. to Application in No. 20A90, at 26–27.

But against this, one could argue, as did Justice Sotomayor in her dissent, that businesses that didn’t have government-specified limits are materially different, in terms of viral spread, from church congregations, especially where congregants are singing loudly. From her dissent:

But JUSTICE GORSUCH does not even try to square his examples with the conditions medical experts tell us facilitate the spread of COVID–19: large groups of people gathering, speaking, and singing in close proximity indoors for extended periods of time.

As I noted, the case appears moot because the numerical limits obtaining at the time of the lawsuit have since been lifted (this was emphasized in the dissents). But the majority opinion took that into account as well, saying that Cuomo’s decision could be reversed, and rather than re-litigate the issue, I presume the court wanted to render an opinion that would be in place should that reversal take place:

The dissenting opinions argue that we should withhold relief because the relevant circumstances have now changed. After the applicants asked this Court for relief, the Governor reclassified the areas in question from orange to yellow, and this change means that the applicants may hold services at 50% of their maximum occupancy. The dissents would deny relief at this time but allow the Diocese and Agudath Israel to renew their requests if this recentreclassification is reversed.

There is no justification for that proposed course of action. It is clear that this matter is not moot. See Federal Election Comm’n v. Wisconsin Right to Life, Inc., 551 U. S. 449, 462 (2007); Friends of the Earth, Inc. v. Laidlaw Environmental Services (TOC), Inc., 528 U. S. 167, 189 (2000). And injunctive relief is still called for because the applicants remain under a constant threat that the area in question will be reclassified as red or orange. See, e.g., Susan

B. Anthony List v. Driehaus, 573 U. S. 149, 158 (2014). The Governor regularly changes the classification of particular areas without prior notice.3 If that occurs again, the reclassification will almost certainly bar individuals in the affected area from attending services before judicial relief can be obtained.

I suppose Left-wing sites might couch this as an unwarranted, pro-faith opinion supported by the usual suspects, who now include Barrett. And that may be the case, but it’s not a cut-and-dried issue. Here are my thoughts:

2.) Nevertheless, when public safety is compromised by free exercise of religion, the former trumps the latter, as it has historically. Practicing one’s faith does not give you the right to endanger those who are not of your faith.  This gives courts the power to restrict religious practice if it, for example, is likely to spread coronavirus.

3.) But one cannot discriminate against churches in this respect, imposing sanctions on them that aren’t imposed on similar enterprises like businesses.

4.) HOWEVER, and this is the most important bit for me, is a church with a congregation limit of 10 equivalent to a business like Wal-Mart in which more than ten people are present at once—in a much larger space? I don’t think so, particularly when church congregants sing and pray without masks, a particularly dangerous way of spreading the virus via respiratory droplets.  I’m not sure whether the court’s decision, holding equivalence such as this, is justifiable, and Sotomayor makes that point. This is in fact a public health rather than a legal decision, and is not really within the court’s competence.

5.) As for the restrictions having changed, rendering the original lawsuit moot, I do agree with the majority that given the to-and-fro of restrictions during the pandemic, a judgment was still warranted. Whether this was the right one, I am not sure. But it’s better to have some opinion in place rather than having the matter re-litigated should restrictions once again be imposed.

Perhaps there are lawyers in the crowd here who want to render an opinion, and I have to say that I haven’t scrutinized the entire set of opinions minutely. But this decision doesn’t bother me as much, as, say, ones that pose more serious dangers, including those that restrict abortion or dismantle the Affordable Care Act. But those will be coming, for the court is now solidly conservative—even if Justice Roberts is mellowing in his old age.