As I noted in my Hili post, today is Evolution Day: the anniversary of the day on which Darwin published The Origin in 1859.  It’s one the book I’ve read more than any other: I used to go through it once a year or so, but it’s been about three years now. My copy of the first edition is old and battered, and the inside cover (below) shows that I bought it shortly after I started my doctoral work at Harvard. (I hadn’t read it before then). Note, too, the title, which we should all know in full (Richard Dawkins, to his embarrassment, was once asked the full title by a creationist but couldn’t recall it, and that was used against Richard by those looking for reasons to demonize him.)

On the Origin of Species by Means of Natural Selection, or the Preservation of Favoured Races in the Struggle for Life

That’s the title of the first five editions; in the Sixth (the last), the initial word was dropped.

There will be a quiz.

My Pelican Classics edition is now held together with tape, and I have about four other copies, including the Sixth Edition. But I recommend reading the First Edition to get the full feeling of how Darwin’s ideas hit the world in the solar plexus. Like the fatal punch that did in Houdini, the book put paid to creationism, Biblical or otherwise, in one blow. 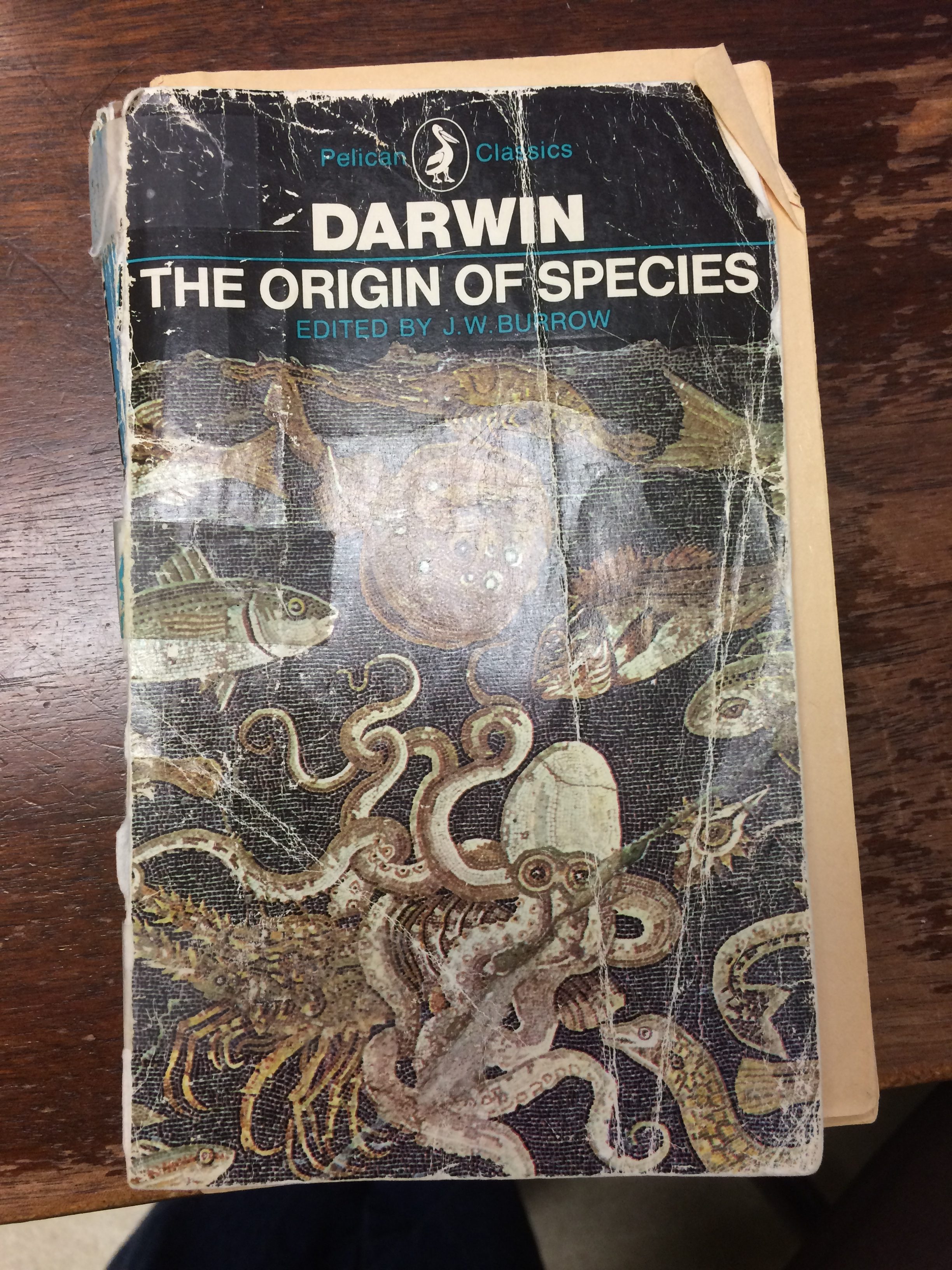 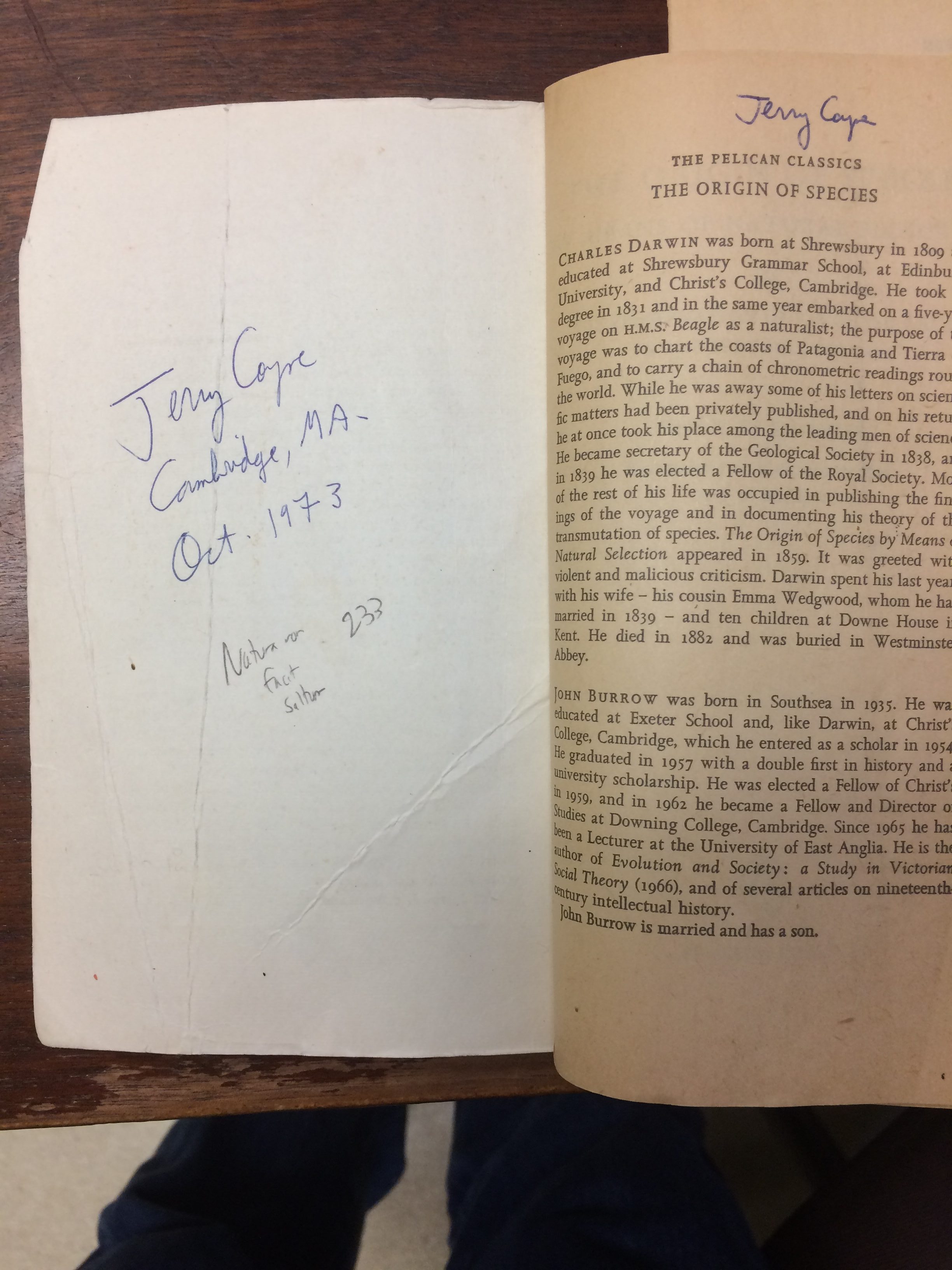 As I’m occupied with University business this morning, I’ll throw this one out to the readers. In general, I’ll ask you to give your take on the book and, if you’ve read it, to tell us what impressed (or didn’t impress) you. If you haven’t read it, shame on you, for I’ve always say that any person who wants to be considered “educated” needs to have read The Origin.

It’s not an easy read: my introductory-evolution students always bridled at the Victorian prose, and even the abridged Dover edition turned them off. Further, some of the chapters, like that on “Hybridism” are particularly dense and even opaque. But as “one long argument,” as Darwin called it, it is an incomparable journey into the mind of a captious naturalist, one who always searched for flaws in his own ideas.  If you haven’t read it, please start now (you can explain your dilatory behavior below). If you have, please enlighten us with your thoughts about it.

My own take is that it’s the greatest science book of all time, but of course I’m biased.

Thoughts on The Origin

Jerry asked me to weigh in here with some thoughts on The Origin, and I’m happy to do so. Before seeing what Jerry wrote, I reached up and took down my first copy of The Origin off the bookshelf, just like Jerry did! And, just like Jerry, I have four other copies, including a facsimile of the sixth edition! 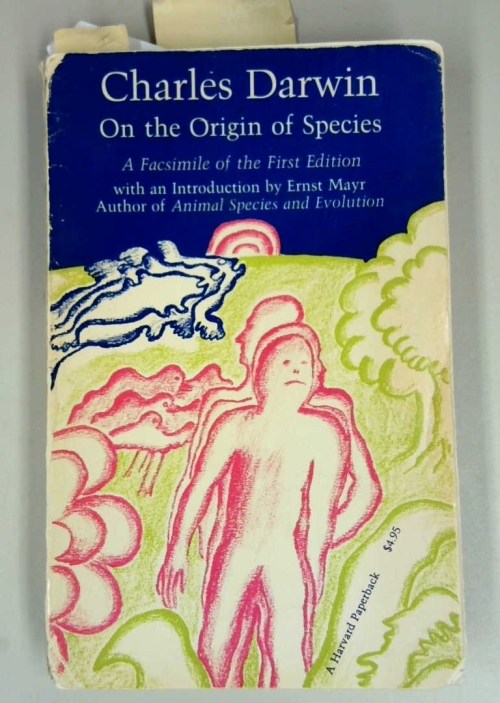 This is the Harvard University Press facsimile of the first edition, with an introduction by Ernst Mayr (third printing, 1975). I also have a later printing of this version, since this copy got pretty beat up from frequent use.

In October 1976, I was a sophomore at SUNY Stony Brook, and bought this in the bookstore there. It wasn’t for a course that I was taking, but I often bought books for other courses that I thought interesting. In fact, I already knew who Mayr was, because in high school I had purchased a copy of his Populations, Species, and Evolution at the Stony Brook bookstore. My recollection is that I first read The Origin start to finish while doing field work on Grand Cayman while in graduate school. My copy is well-annotated. The annotations were written at various times, but I can’t usually tell when they were made. I’ve always been interested in island life, so here are a couple of pages on oceanic islands with my notes. 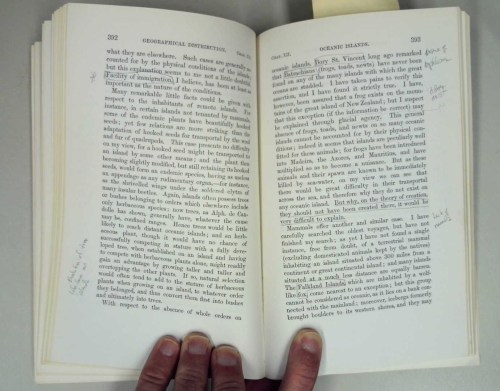 Like Jerry, I have often assigned parts (sometimes large parts) of The Origin as reading for my evolution classes. (I think Jerry may have influenced me in this regard.) But unlike Jerry (or at least Jerry’s students), I find The Origin eminently readable– I think the prose is terrific! It is an excellent model and exemplification of scientific argument.

Jerry made note in this morning’s Hili Dialogue about John van Wyhe’s posting of some newly uncovered Darwin manuscripts, and you can read them all here at John’s wonderful website, Darwin Online. If you’re interested in The Origin as a document, his website is also the place to go, with authoritative discussion of the publication history, many scanned versions available to read online, and a complete listing of editions. John and his collaborators have continued the work of R.B. Freeman, who compiled an authoritative (as of 1977) catalog of all of Darwin’s works; Freeman’s catalog is available at Darwin Online. The Harvard University Press edition is “Freeman 602“, which is a facsimile of “Freeman 373“. As we’ve had occasion to note many times before here at WEIT, John van Wyhe and his collaborators have done an inestimable service to students, scientists, and historians in gathering together and making available these materials.

JAC Response: I didn’t claim that the book was unreadable, but that it was “not an easy read” and that parts were opaque or tough. It isn’t an easy read, for it requires you to stop and think frequently, which is a good thing. “Easy reads” are those books you can just breeze through. I find the book eminently readable—except for the “Hybridism” chapter!

43 thoughts on “Thread: On the “On the Origin of Species””