While perusing this week’s New Woker, I came across a fascinating article (they’re getting rarer) about a group of loosely-affiliated people who are trying in various ways to bring down the murderous and despotic government of North Korea (DPRK). I’m not sure the article below is free, but click on a screenshot to see: 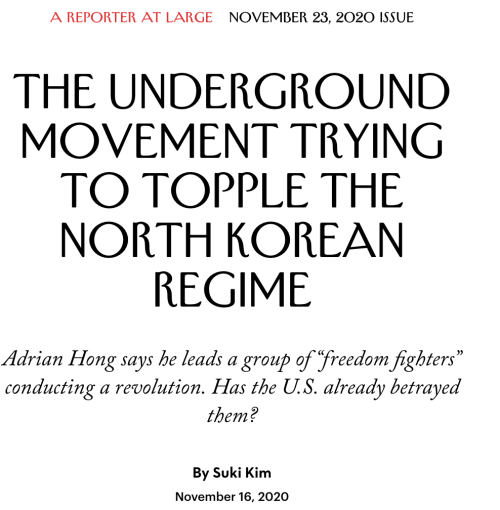 Trying to escape from North Korea is a harrowing and often fatal venture. The border with China is heavily guarded, and North Korean guards have orders to “shoot to kill.” (Crossing to South Korea is nearly impossible given the wide and mined DMZ). Once you make it to China, your troubles have just begun. If the Chinese authorities catch you, more often than not you’ll be sent back to North Korea. There you’ll be put in a prison camp—almost the equivalent in lethality of Nazi concentration camps. The only way out is to get to Mongolia, or travel through China to another country to ask for asylum. (In rare cases the Chinese will allow defectors to fly to South Korea or other countries.)

And even if your egress is successful, the North Korean policy is to imprison or execute (they’re equivalent) the family members of the escapee—three generations worth. Thus, if you have a family and successfully escape (and they know you have), you can be assured that you’ve just doomed your family. It’s a brutal and ruthless process.

This is all detailed in the New Woker article, along with an sketch of how a group of people are trying to bring down the government of the DPRK, forming a government-in-exile (completely ignored) and engaging in some activism. Still, it’s the first time an organized opposition to the North Korean government has formed. Between the article’s lines, however, you sense that although the members of the opposition group are brave and committed, their task is largely hopeless. What could bring down a cruel tyranny that doesn’t bridle at starving and killing millions of its citizens—citizens who are largely brainwashed into thinking they live in a worker’s paradise and know almost nothing of the outside world? The problem of North Korea, and how to liberate its oppressed citizens, seems intractable.

While reading the piece, I read this (“Adrian” is one of the activists):

Travelling to two or three college campuses a week, Adrian would change into his one “crappy suit,” and give presentations about the horrors of life in North Korea, sometimes screening the documentary film “Seoul Train,” which follows defectors escaping to China.

I wondered if I could find “Seoul Train” online, and, sure enough, there it was on Vimeo—the entire movie. It’s a fascinating watch, but also very sad as well. If you have a spare hour, and want to know about the world’s most enigmatic and tyrannical country, you could do worse than clicking on the video below.

17 thoughts on “Residents continue to flee North Korea despite unbelievable dangers, and there’s now a movement to topple the regime”