The 25th Amendment of the Constitution provides a way for the Vice President to replace the President if the latter becomes unable to fulfill the duties of his office. I won’t give the whole Amendment, but the relevant parts for this piece concern Trump’s erratic behavior, which many psychiatrists have diagnosed as a mental illness serious enough to have him removed from office.

In case of the removal of the President from office or of his death or resignation, the Vice President shall become President.

Now Section 4 is a bit unclear as to exactly who will provide the written declaration of the President’s unfitness, though it seems that a majority of the Cabinet, acting with the Vice President, could do the deed. However, a number of psychologists and psychiatrists have, over the last few years of the Trump Presidency, decided and declared that the man is palpably unfit for office—indeed, according to their remote diagnoses, he’s mentally ill—and should be given the boot forthwith.

I agree that Donald Trump is mentally ill, but I’m not a professional, and thus am not bound by the strictures of professional associations to avoid diagnosing someone you haven’t personally examined. And those strictures exist most prominently in the American Psychiatric Association’s (APA’s) “Goldwater rule“, created after a number of psychiatrists pronounced Barry Goldwater unfit for office in 1964. Here’s the rule from the APA’s “Principles of Medical Ethics,” and this rule is still in force:

On occasion psychiatrists are asked for an opinion about an individual who is in the light of public attention or who has disclosed information about himself/herself through public media. In such circumstances, a psychiatrist may share with the public his or her expertise about psychiatric issues in general. However, it is unethical for a psychiatrist to offer a professional opinion unless he or she has conducted an examination and has been granted proper authorization for such a statement

There doesn’t seem to be a penalty for psychiatrists who flout this rule, however, as psychiatrists who have diagnosed Trump as ill, or even lobbied Congress to proceed with the Trump Dump, have suffered no penalties.

The many writings and activities of the therapeutic community—psychiatrists, their subset of psychoanalysts, as well as psychologists and medical doctors—to depose the President are detailed in Wikipedia as well as in the op-ed below that just appeared in USA Today. The author, Bandy X. Lee, is a forensic psychiatrist at Yale who’s spent a lot of her time trying to promote Trump’s removal on mental-health grounds. I wrote about her activities, and those of other therapists, in October of this year. (She also edited a book:  “The Dangerous Case of Donald Trump: 37 Psychiatrists and Mental Health Experts Assess a President). But now that all of the professionals have failed to get Trump removed—and, anyway, the voters have done what the shrinks couldn’t—she’s back, this time arguing, too late for this case, that the Goldwater Rule violates the First-Amendment right of psychiatrists to speak up, and also (her usual line) that psychiatrists have a duty to speak up because of the danger that Trump poses to America.

Perhaps Dr. Lee is now concerned about future deranged Presidents, and maybe that’s why this appeared when Trump is already on the way out. As for my own opinion, well, yes, I think he’s a narcissist and a sociopath or psychopath, but I am not a professional therapist. If I were, I would not give my professional opinion, for I happen to believe that the Goldwater Rule is correct. Just as a medical doctor won’t give an opinion about what illness a public figure has if that hasn’t been revealed, so a psychiatrist (they’re all M.D.s) should keep mum about mental illness. There is of course a difference, as mental illness could render a President dangerous or ineffectual. But so could many diseases, like stroke or dementia. (Woodrow Wilson was rendered unfit to run the country by a stroke.)

That’s why the APA restated and supported the Goldwater Rule in 2018, a ruling that was even supported by the New York Times:

The psychiatrists say they have a duty to warn the public about what they see as a serious threat to the nation. That’s commendable, but they should consider how their comments will be taken by the vast majority of Americans, particularly in a highly politically polarized time. The language of mental health and illness is widely used yet poorly understood, and it comes loaded with unwarranted assumptions and harmful stereotypes. There’s a good reason the profession established an ethical guideline in 1973, known as the Goldwater Rule, that prohibits psychiatrists from offering professional judgment on public figures they have not personally examined.

The best solution is the simplest: Vote, and organize others to register and to vote. If you believe Donald Trump represents a danger to the country and the world, you can take action to rein in his power. In November, you can help elect members of Congress who will fight Mr. Trump’s most dangerous behaviors. If that fails, there’s always 2020.

And, YES WE DID.  Lee herself seems a bit obsessive in publishing the same old same old at this late date, especially when there’s really no penalty for psychiatrists violating the Goldwater Rule. In her closing, she also says that the APA’s rule about keeping mum is a breach of the First Amendment:

We need to get back to basics. Painter stated at our conference: “the Goldwater rule … is a violation of your First Amendment rights, and a violation of your duty to your country and to human civilization.” It is a basic understanding that to remain silent against a critical medical need is a violation of our professional “responsibility to society,” as outlined in the first paragraph of the preamble of our ethics code. The APA should no longer mislead the public and the media into believing that its guild rule of restricting speech on public figures, which no other mental health association has and is not admissible on any state licensing board, is universal. The truly universal Declaration of Geneva says that we must prevent harm and injustice, especially when they are coming from a destructive government.

Lee is dead wrong about “other associations not having similar regulations,” for the American Psychological Association (another APA), has very similar rule: 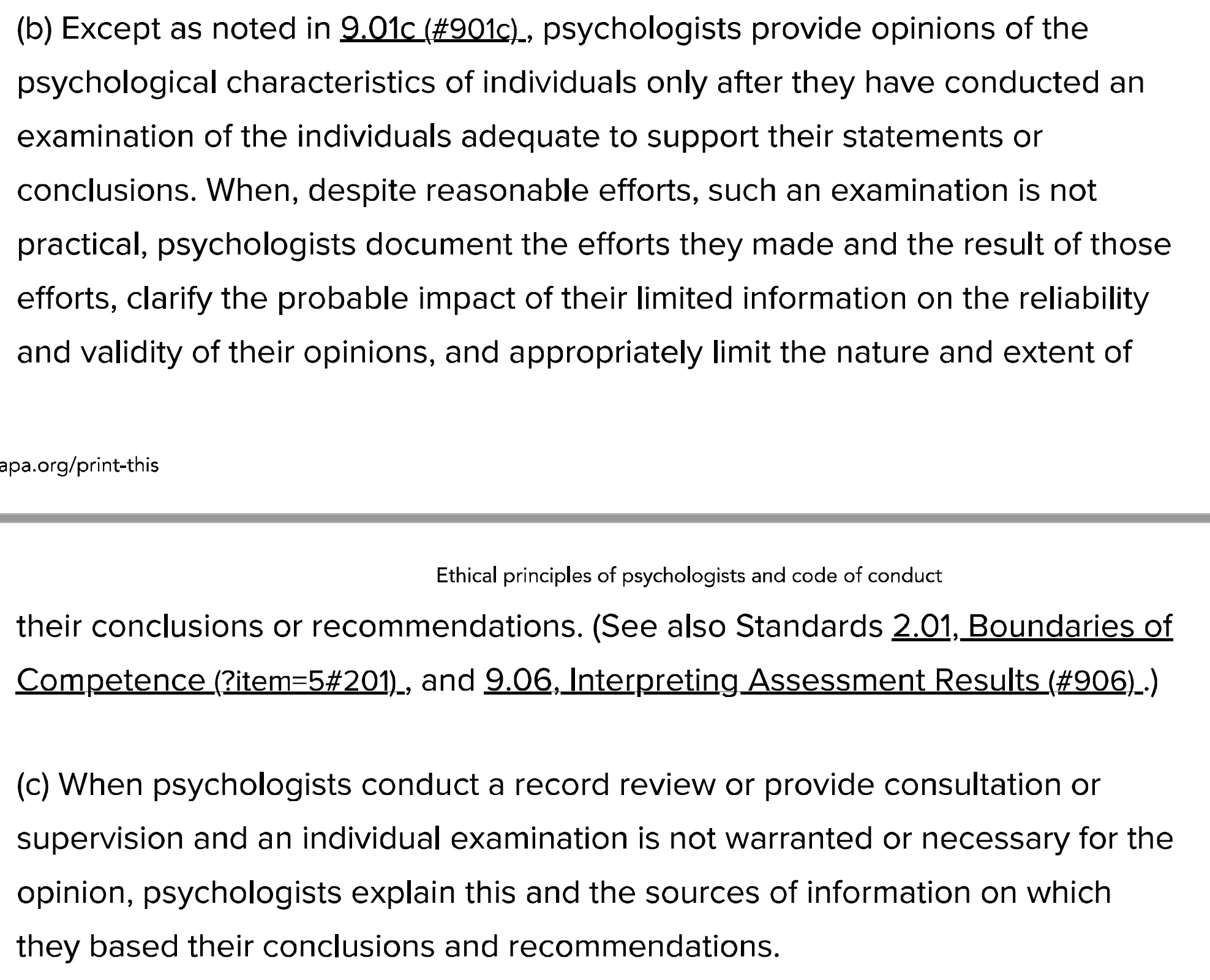 Of course a psychiatrist or psychologist can give their opinion without government penalties, for such penalties do constitute censorship and it’s a violation of the First Amendment for the government to sanction anyone for saying that Trump is a loon. But the APA’s penalty (were it enforced) would be a sanction by a professional organization, so the First Amendment doesn’t come into play.

Is it a duty to America for therapists to say that Trump is mentally ill and unfit for office? Well, given what the NYT said, I doubt that such warnings would have any effect. In fact, they didn’t, because thousands of Democratic non-therapists have offered the same opinion, and none of it had any effect. Somehow Dr. Lee thinks that she and her colleagues have the unique medical power to pry Trump out of the Oval Office. They don’t—not with Pence and Trump’s cabinet being who they are. And the speech of Dr. Lee and her colleagues is not restricted. They had their say, and even wrote a book. It did no good, and that’s what you’d expect.

Were I a Democratic, anti-Trump psychiatrist or psychologist, I’d keep my gob shut about diagnoses and just say that Trump is endangering America—without tendering a professional opinion about his mental health. You can palpably point out how the man has damaged America without speculation about what in his brain made him do it.

54 thoughts on “Is the “Goldwater rule” a good ethical guide for therapists, and does it violate Americans’ freedom of speech?”