Two tweets disturbed me this morning, both calling attention to Richard Stengel‘s anti-free speech column in the Washington Post last October. Stengel is a writer and government official who was editor of Time magazine and also worked as Undersecretary of State during the Obama administration. Now he’s on the Biden transition team for the U.S. Agency for Global Media, though I’m not sure exactly what that job involves.

(The “ACLU retreats from free expression” piece mentioned in the tweet below was written by Wendy Kaminer in the Wall Street Journal in June, 2018, and access isn’t free.  I’ve been saying that same thing for a while though, and I’ll try to get my hands on it. It is true that the ACLU is taking some alarmingly regressive steps.)

At any rate, a bit over a year ago Stengel—and remember, he’s on the media part of Biden’s transition team—wrote this op-ed. Click on the screenshot to read it. 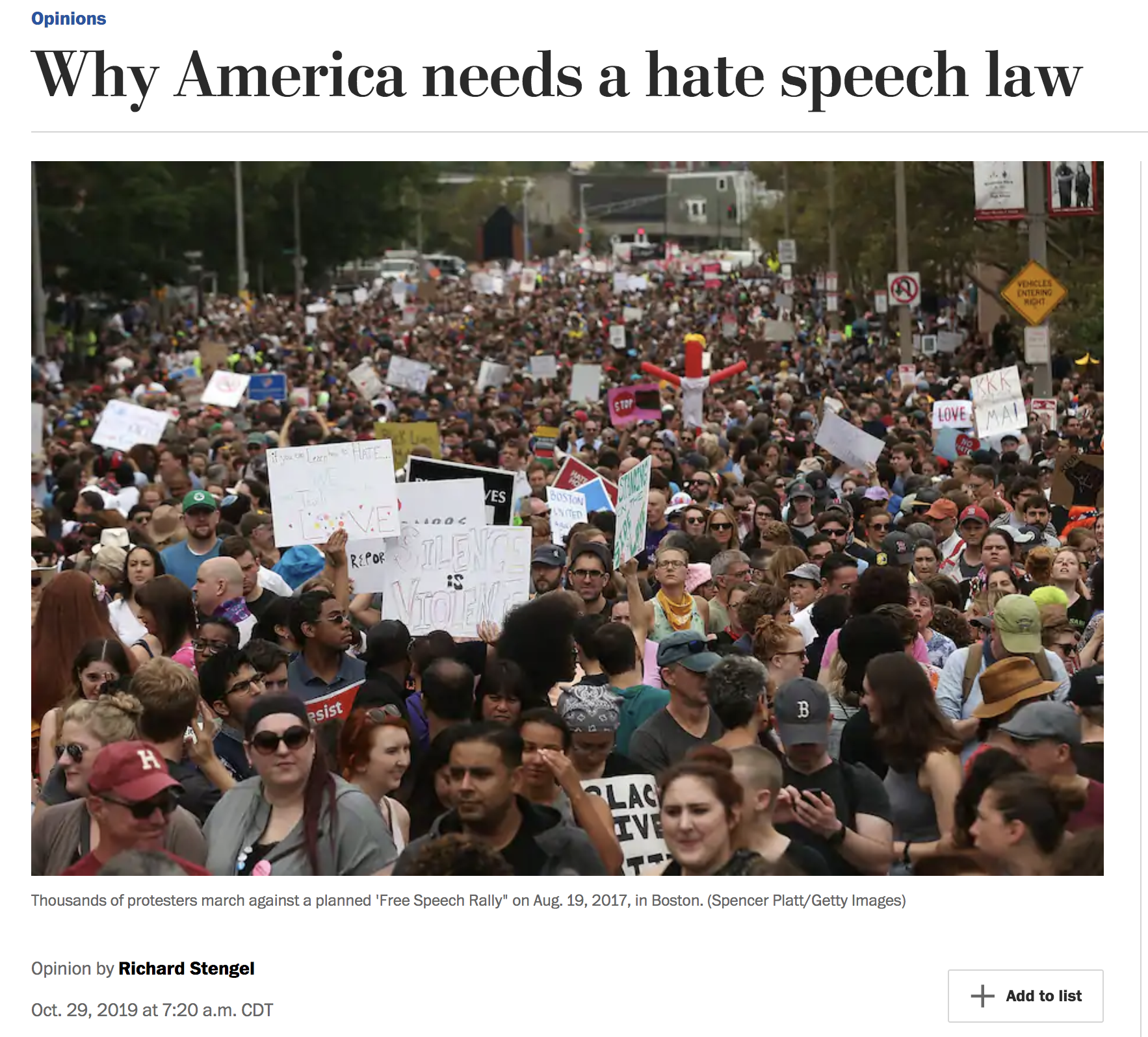 Stengel’s contention is that the First Amendment is outmoded, especially in an age of social media, for there is no guarantee that “truth will drive out lies” now. But when was there ever a guarantee? Here’s what he says:

It is important to remember that our First Amendment doesn’t just protect the good guys; our foremost liberty also protects any bad actors who hide behind it to weaken our society. In the weeks leading up to the 2016 election, Russia’s Internet Research Agency planted false stories hoping they would go viral. They did. Russian agents assumed fake identities, promulgated false narratives and spread lies on Twitter and Facebook, all protected by the First Amendment.

the intellectual underpinning of the First Amendment was engineered for a simpler era. The amendment rests on the notion that the truth will win out in what Supreme Court Justice William O. Douglas called “the marketplace of ideas.”

This “marketplace” model has a long history going back to 17th-century English intellectual John Milton, but in all that time, no one ever quite explained how good ideas drive out bad ones, how truth triumphs over falsehood.

Milton, an early opponent of censorship, said truth would prevail in a “free and open encounter.” A century later, the framers believed that this marketplace was necessary for people to make informed choices in a democracy. Somehow, magically, truth would emerge. The presumption has always been that the marketplace would offer a level playing field. But in the age of social media, that landscape is neither level nor fair.

Of course there’s no guarantee that the truth will drive out lies: Trump’s falsehoods have been widely believed, but of course the media has exposed them as lies. It’s the free press that allows this exposure, but it can’t guarantee that everyone is going for the “truth” side. If that were the case, there would be no religions! And there’s nothing all that different about social media: there has always been media in which people have told untruths. It’s just now that media is available to everyone, who can put up their merest thoughts in an instant.

Still, the clash of opinion on things like abortion, the Israel/Palestine question, affirmative action, gun control and the like are the only ways to give both sides an airing and to propound their best arguments. The rest is up to the people. If you don’t have this clash of ideas because one side claims that it KNOWS THE TRUTH and will censor the other side, then we’re truly doomed. Allowing someone to determine the truth is the surest way to guarantee that the truth becomes one person’s opinion. And this is the whole problem with Stengel’s attack on the First Amendment and push for “hate speech”—which he sees as speech that people find insulting to their race, religion, ethnicity, and sexual orientation:

Since World War II, many nations have passed laws to curb the incitement of racial and religious hatred. These laws started out as protections against the kinds of anti-Semitic bigotry that gave rise to the Holocaust. We call them hate speech laws, but there’s no agreed-upon definition of what hate speech actually is. In general, hate speech is speech that attacks and insults people on the basis of race, religion, ethnic origin and sexual orientation.

I think it’s time to consider these statutes. The modern standard of dangerous speech comes from Brandenburg v. Ohio (1969) and holds that speech that directly incites “imminent lawless action” or is likely to do so can be restricted. Domestic terrorists such as Dylann Roof and Omar Mateen and the El Paso shooter were consumers of hate speech. Speech doesn’t pull the trigger, but does anyone seriously doubt that such hateful speech creates a climate where such acts are more likely?

It could, but it also outs those who are bigots and allows us to see their arguments. If arguments for bigotry win, then we have no chance as a democracy, anyway. And there are already laws, as Stengel says, against speech that incites violence—if the violence is imminent and predictable. If the violence could result much later from someone’s speech, then people like Richard Dawkins could be (and have been) accused of pulling the trigger, for Dawkins is an anti-theist who attacks religion in general, including Islam. If some crazed Muslim-hater reads Dawkins or Hitchens and goes on a killing spree, does that make them responsible, and should their works have been censored because they offend believers? No, because we can’t predict or fend off everything that could result from speech. We might as well ban Evangelical Christianity because the Bible, and their preachings, have led to the killing of abortion doctors and the demonization of homosexuals.

Let the debate begin. Hate speech has a less violent, but nearly as damaging, impact in another way: It diminishes tolerance. It enables discrimination. Isn’t that, by definition, speech that undermines the values that the First Amendment was designed to protect: fairness, due process, equality before the law? Why shouldn’t the states experiment with their own version of hate speech statutes to penalize speech that deliberately insults people based on religion, race, ethnicity and sexual orientation?

All speech is not equal. And where truth cannot drive out lies, we must add new guardrails. I’m all for protecting “thought that we hate,” but not speech that incites hate. It undermines the very values of a fair marketplace of ideas that the First Amendment is designed to protect.

Yes, Stengel is a Pecksniff who wants hate speech laws, but is curiously silent about who will make them? Who will be The Decider? We all know the problems with that, and they are pretty much insuperable. For every Biden official who disallows criticism of Black Lives Matter and Islam, there will be a later Trumpy official who criminalizes speech that liberals favor. The best solution is to allow everyone to say their piece, with a reasonable few exceptions that the courts have carved out as outweighing free speech (false advertising, defamation, harassment of individuals, and so on).

You know what my worries are: that Stengel will influence and also reflect a general censorious wokeness on the part of the new Biden administration. Granted, this editorial was written over a year ago, but I think it’s fair to ask Stengel if he still stands by it. If he does, then we should keep a weather eye on his behavior—and that of the Biden administration’s actions about speech.