I am not a good listener to podcasts, as my attention tends to wander; I find myself trying to listen while doing other stuff at the same time, which distracts me (my view is that you can’t listen to podcasts and do anything else at the same time except driving); and, mainly, I can read much faster than I can listen. I could, for instance, just scan a transcript of a podcast and decide immediately if it was worth my while—and then I’d read the transcript. But you can’t “scan” a podcast, as you might miss something.

Also, many podcasts are long: longer than an hour, and up to three or more! That’s just too long, at least for me.

But I tried, I really did. I thought that if any podcast would absorb my attention, it would be a conversation between two people I find smart and interesting: Sam Harris and Andrew Sullivan. And so I vowed to listen to at least an hour of their latest conversation, the first on Sullivan’s new Weekly Dish. You can listen to part of it at Sam’s site for free (or the whole thing if you subscribe), and all of it for free at Andrew’s site, but only if you subscribe.

Click on the screenshots below to go to either one: 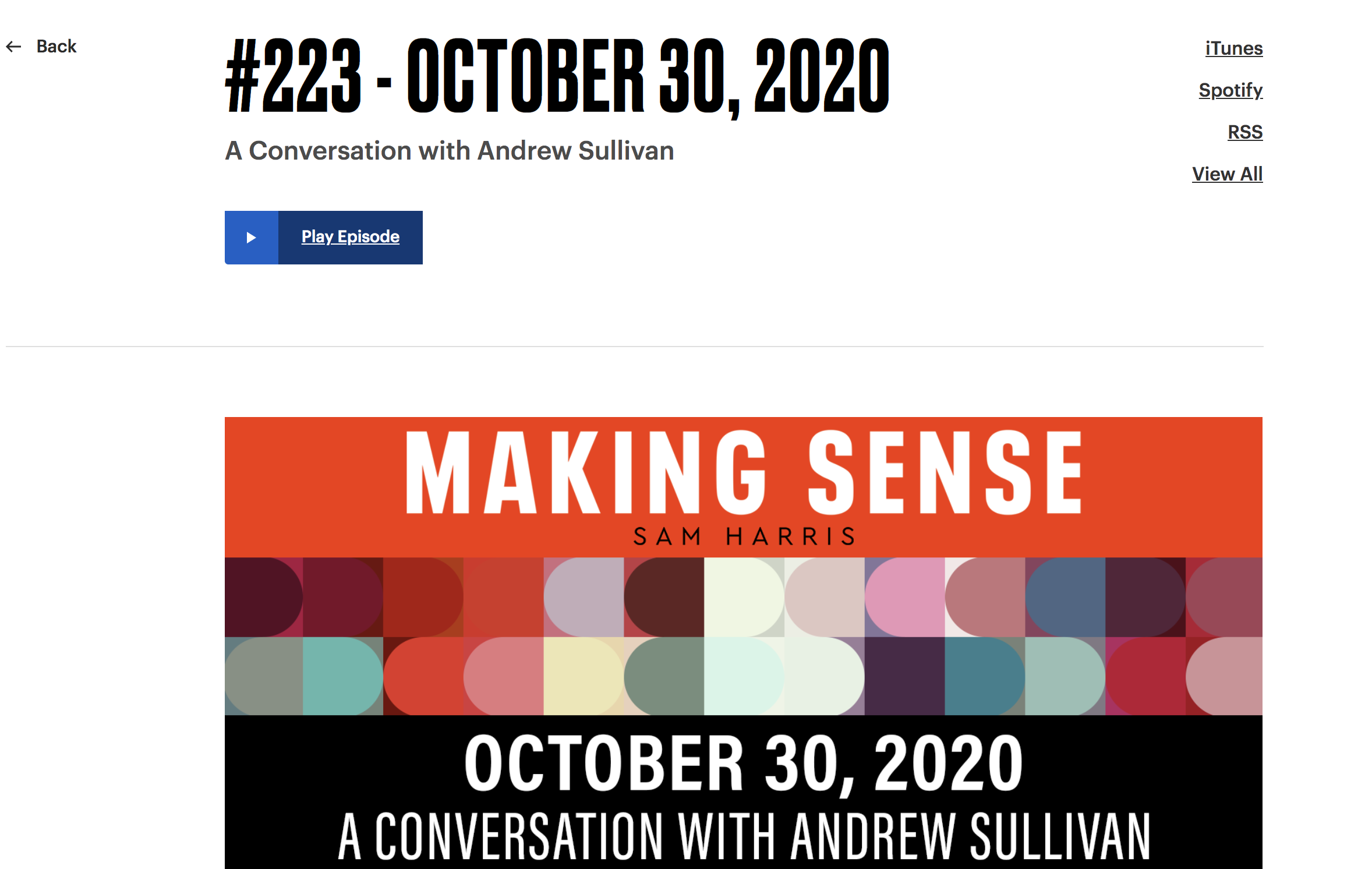 Sadly, I made it through only 70 minutes before I had to give up. That’s because I wasn’t hearing anything new: just two really smart and eloquent guys beefing about Trump’s pathological narcissism and mental illness, his abysmal failure to assure us that the transfer of power in the next election, if needed, would be peaceful, how he’s lied repeatedly, and so on. In other words, I heard only stuff that wasn’t new to me. And I’m not particularly immersed in politics.

I was momentarily energized, around the hour mark, by Sullivan’s brief harangue of the mainstream media for its bias and failure to print alternative (i.e., conservative) views, as well as his argument that the extreme left’s accusation that every white is a race supremacist carrying a load of bias has driven people towards Trump. At an earlier point, both men agreed that Trump should not have been viewed as a cure for Woke-ism, because his activities simply exacerbated it.

But I believed these things already; it was just good to hear them echoed by people I respect. But, after 70 minutes, if you asked me what I learned, what I was intrigued by, or what I changed my mind about, I’d have to say, “Bupkes.”

Maybe it’s just me, or maybe it’s just that this wasn’t a sterling podcast to hear. But I’m not that interested in hearing more—from anyone. I’m certainly not damning them all, as many of my friends swear by the podcast and in fact deign to read books our article by the very people who create the audio. Maybe you can listen intensely by doing other things. And certainly, they’re more popular than websites, as all the cool kids seem to have turned to audio rather than writing. Right now I have no data contradicting the theory that “It’s just me.”