This really is breaking news: the New York Times says two people were killed, while CNN says three, with one woman decapitated. The attack took place in a Church, the Notre Dame Basilica in Nice, and has all the earmarks of being a terrorist attack. It comes hard on the heels of the recent decapitation of Samuel Paty, which led the Macron government to begin cracking down on radical Islam, including instituting procedures to ensure that imams don’t preach hatred. It could be reasonably argued that that kind of incitement to violence, which leads to attacks like this one and the last, does not constitute protected free speech but France doesn’t have the First Amendment anyway.

An assailant with a knife killed at least two people on Thursday morning at a church in the southern French city of Nice, according to local officials who said it appeared to be a terrorist attack.

The assault comes as the country is still shaken by the beheading of a teacher in a Paris suburb this month by a young Muslim man after the teacher showed caricatures of the Prophet Muhammad in a class.

The mayor of Nice, Christian Estrosi, said in a statement posted to Twitter shortly after the attack that he was on the scene with the police and that a suspect had been arrested. He later said at least two people were killed and one seriously injured.

. . . The attack took place at the Notre-Dame de L’Assomption basilica, and the local authorities did not immediately release details about the victims or the circumstances. The police warned residents to stay away from the area around the church as a “very serious” event was underway and controlled explosives were being used. They also urged residents to remain calm.

Videos posted to social media showed lines of people filing out of the area around the church as police evacuated the scene.

In 2016, Nice was also the site of one of France’s worst terrorist attacks, when a man plowed a 19-ton refrigeration truck into crowds that had gathered on the city’s main seaside promenade to watch fireworks, killing 86.

And the NYT has an unfortunate headline on its front-page leader: 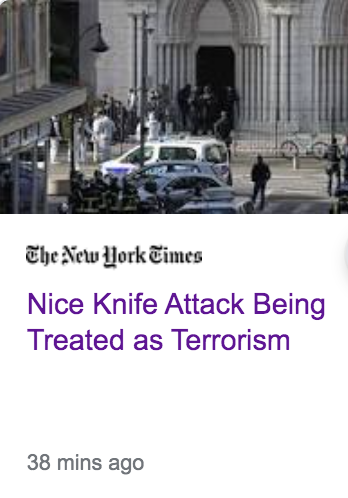 Update: Among those excusing the terrorist, and blaming this on the French, is the Prime Minister of Malaysia, for crying out loud. PM Mohamed is angry and you can see that in the thread (this is #12):

Tweeted from his official account by the Prime Minister of Malaysia a couple of hours after three people were murdered – two of them beheaded – at the cathedral in Nice a few kilometers from where I live. https://t.co/UzPc8xdRqT

33 thoughts on “Terrorist knife attack in Nice, France kills three, with one decapitated”