I’ve written a fair few critical posts about panpsychism, the idea that the “hard problem of consciousness” is solved by positing that all matter in the Universe is conscious. Advocates of panpsychism say that understanding consciousness in an organism like humans is impossible with present approaches, for figuring out how the feeling of “subjective experience”, or “qualia” can never be accomplished by simple mechanistic study and manipulation of biological features like neurons. Panpsychists reject a correlational approach—that if we have a complete picture of what structures have to be there for an organism to experience consciousness, we’ve solved the problem. It maddens them that this, in fact, is the way neuroscientists are approaching the problem.

Instead, they “solve” the problem by saying that all matter, from electrons on up, has a form of consciousness, and so—problem solved—humans are conscious because all the matter in their bodies and brains are conscious. But this raises two issues. First, how does the rudimentary consciousness of electrons, atoms, and molecules combine in a human to create a much more sophisticated kind of consciousness? This is known as the “combination problem.” Advocates of panpsychism, including Philip Goff—an assistant professor of philosophy at Durham University—have no solution to this problem.  (Yes, I read his book on panpsychism and found it deeply flawed.)

Further, the claim that inanimate objects like electrons, rocks, and spoons have a form of consciousness is untestable in any way I can see, and so the theory is a non-explanation: a kind of metaphysical claim that will lead nowhere, even as neuroscientists beaver happily away, figuring out what is required for consciousness and its sub-bits.

Nevertheless, every time I write about panpsychism, or post about it on Twitter, I get a passel of enraged advocates who tell me that it’s a great theory and I misunderstand it. My answer is this: no, it’s a crappy theory and I don’t misunderstand it. For some reason, perhaps because of its numinous, almost dualistic aspect, it attracts a certain kind of person—the kind of person who worships quacks like Rupert Sheldrake and Deepak Chopra.

But I won’t psychologize further; this post is to point out that neuroscientist Anil Seth went after panpsychism over two years ago on NeuroBanter, as well as more recently.  I had missed this earlier critique, but it’s short and sweet, and is still absolutely relevant since panpsychism, being untestable, has not progressed since then. Seth is professor of Cognitive and Computational Neuroscience at the University of Sussex as well as “Co-Director (with Prof. Hugo Critchley) of the Sackler Centre for Consciousness Science and Editor-in-Chief of Neuroscience of Consciousness.” You can read his critique by clicking on the screenshot below: 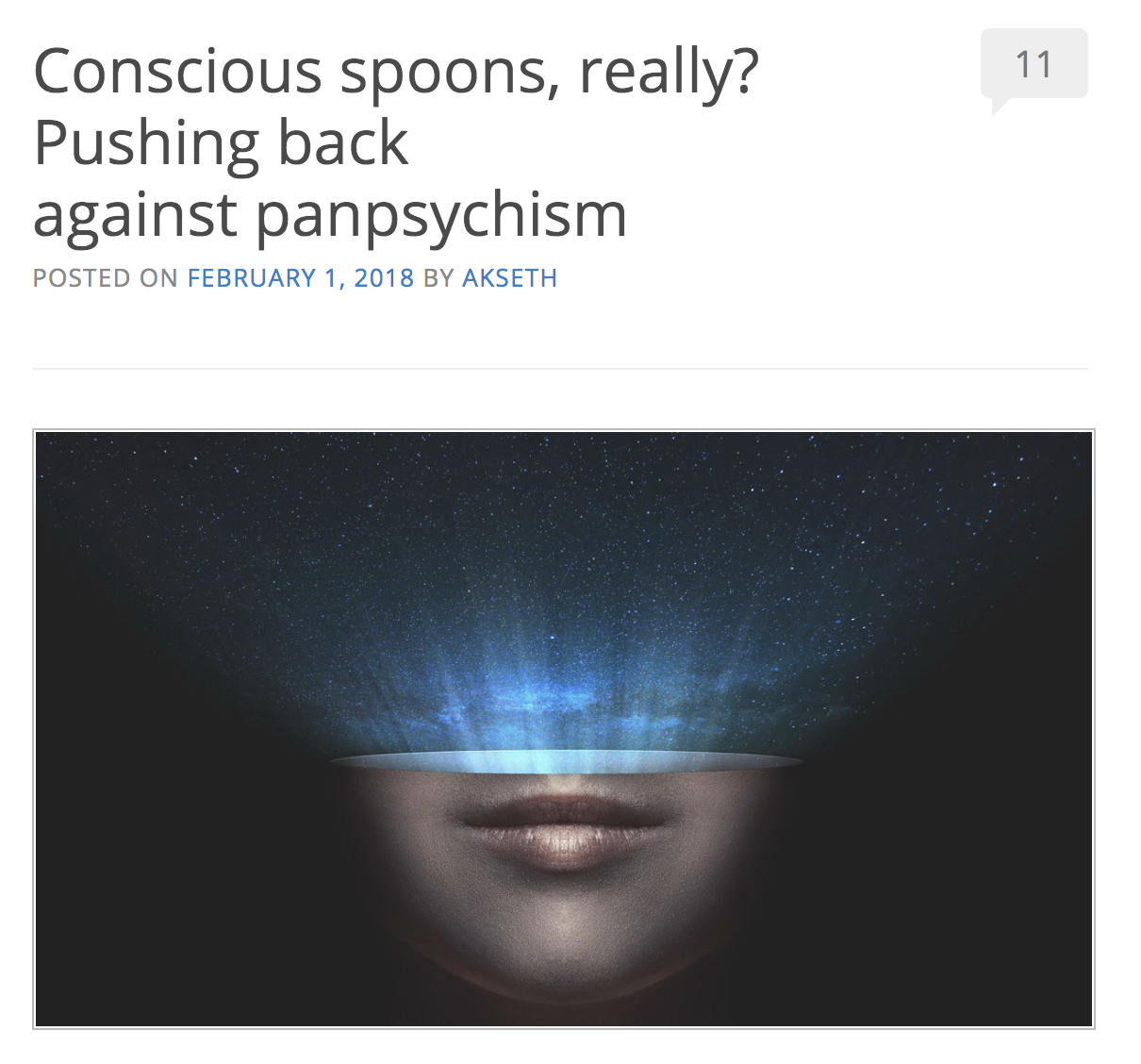 I’ll give a few quotes and then move on. Re the claim of people like Goff that panpsychism is getting more attention lately, Seth says this, referring to” a recent piece by Olivia Goldhill in Quartz with the provocative title: ‘The idea that everything from spoons to stones are conscious is gaining academic credibility’ (Quartz, Jan 27, 2018).

Goldhill’s article is about panpsychism, which is the idea that consciousness is a fundamental property of the universe, present to some degree everywhere and in everything. Her article suggests that this view is becoming increasingly acceptable and accepted in academic circles, as so-called ‘traditional’ approaches (materialism and dualism) continue to struggle. On the contrary, although it’s true that panpsychism is being discussed more frequently and more openly these days, it remains very much a fringe proposition within consciousness science and is not taken seriously by many. Nor need it be, since consciousness science is getting along just fine without it. Let me explain how.

He then explains how “consciousness scientists” are going about their work without a nod to panpsychism. As Laplace supposedly said about God, “We have no need of that hypothesis.”

But consciousness science has largely moved on from attempts to address the hard problem (though see IIT, below). This is not a failure, it’s a sign of maturity. Philosophically, the hard problem rests on conceivability arguments such as the possibility of imagining a philosophical ‘zombie’ – a behaviourally and perhaps physically identical version of me, or you, but which lacks any conscious experience, which has no inner universe. Conceivability arguments are generally weak since they often rest on failures of imagination or knowledge, rather than on insights into necessity. For example: the more I know about aerodynamics, the less I can imagine a 787 Dreamliner flying backwards. It cannot be done and such a thing is only ‘conceivable’ through ignorance about how wings work.

In practice, scientists researching consciousness are not spending their time (or their scarce grant money) worrying about conscious spoons, they are getting on with the job of mapping mechanistic properties (of brains, bodies, and environments) onto properties of consciousness. These properties can be described in many different ways, but include – for example – differences between normal wakeful awareness and general anaesthesia; experiences of identifying with and owning a particular body, or distinctions between conscious and unconscious visual perception. If you come to the primary academic meeting on consciousness science – the annual meeting of the Association for the Scientific Study of Consciousness (ASSC) – or read articles either in specialist journals like Neuroscience of Consciousness (I edit this, other journals are available) or in the general academic literature, you’ll find a wealth of work like this and very little – almost nothing – on panpsychism. You’ll find debates on the best way to test whether prefrontal cortex is involved in visual metacognition – but you won’t find any experiments on whether stones are aware. This, again, is maturity, not stagnation. It is also worth pointing out that consciousness science is having increasing impact in medicine, whether through improved methods for detecting residual awareness following brain injury, or via enhanced understanding of the mechanisms underlying psychiatric illness. Thinking about conscious spoons just doesn’t cut it in this regard.

Seth talks a lot about “integrated information theory” as panpsychists’ way of asserting that consciousness is inherent (in a narrowly defined way) in matter, but that claim is highly technical and I’ll let you read about it yourself. Instead, here’s his take on why an “explanation” of consciousness in scientific terms may be unsatisfying, just as an explanation of quantum uncertainty may be unsatisfying (“that’s just the way it is”), but at least it counts as an explanation. (Correct explanations may not seem emotionally or intuitively satisfying to us.):

. . . people often seem to expect more from a science of consciousness than they would ask of other scientific explanations. As long as we can formulate explanatorily rich relations between physical mechanisms and phenomenological properties, and as long as these relations generate empirically testable predictions which stand up in the lab (and in the wild), we are doing just fine. Riding behind many criticisms of current consciousness science are unstated intuitions that a mechanistic account of consciousness should be somehow intuitively satisfying, or even that it must allow some kind of instantiation of consciousness in an arbitrary machine. We don’t make these requirements in other areas of science, and indeed the very fact that we instantiate phenomenological properties ourselves, might mean that a scientifically satisfactory account of consciousness will never generate the intuitive sensation of ‘ah yes, this is right, it has to be this way’. (Thomas Metzinger makes this point nicely in a recent conversation with Sam Harris.)

Metzinger’s discussion is apparently over 3 hours long (oy!), but you can hear 50 minutes of it at the link.

Finally, the Big Problem with panpsychism:

This leads us to the main problem with panpsychism. It’s not that it sounds crazy, it’s that it cannot be tested. It does not lead to any feasible programme of experimentation. Progress in scientific understanding requires experiments and testability.

As Seth notes, panpsychism is often justified because big names like Arthur Eddington, as well as influential figures like neuroscientist Christof Koch, have favored panpsychism. But even though these people made big contributions to science, panpsychism isn’t made any more credible just because some famous scientists have pushed the theory. In the end, we need data and we need testability—and those things we ain’t got.

I’ve quoted a lot here, as I have little to add to what I’ve said before, but I’ll argue again that the current penchant for panpsychism, which seems to me more a religion than an adherence to science (after all, there is some scientific underpinning to as-yet-untestable theories like string theory, while panpsychism is a form of assertion that didn’t come from science), is baffling. Perhaps its adherents really do believe it instead of glomming onto it to carve themselves out a niche in neuroscience, but we needn’t pay them any heed until they tell us how to test whether spoons are conscious. The last word goes to Seth:

At the end of her piece, Goldhill quotes Chalmers quoting the philosopher John Perry who says: “If you think about consciousness long enough, you either become a panpsychist or you go into administration.” Perhaps the problem lies in only thinking. We should instead complement only thinking with the challenging empirical work of explaining properties of consciousness in terms of biophysical mechanisms. Then we can say: If you work on consciousness long enough, you either become a neuroscientist or you become a panpsychist. I know where I’d rather be – with my many colleagues who are not worrying about conscious spoons but who are trying, and little-by-little succeeding, in unravelling the complex biophysical mechanisms that shape our subjective experiences of world and self. And now it’s high time I got back to that paper on training synaesthesia.

UPDATE: I found that Goff published a response to Seth’s piece (and to another piece) called “The problem with materialism and the explanatory power of panpsychism: A more considered response to Seth and Mitchell.” As the title suggests, it’s explicitly nonmaterialistic, ergo non-naturalistic. Two quotes; you can read the rest for yourself:

But in my view, the opposition to materialism is rooted in the belief that the purely quantitative vocabulary of physical science is ill-suited to the task of capturing the qualities of conscious experience.

Capturing is one thing, understanding is another. And there’s this:

One gets the impression reading Seth’s piece that he thinks anti-materialists are stopping neuroscientists making progress. But in so far as neuroscience is giving us correlations/explanations, it is neutral between materialism, dualism, and panpsychism. The proponents of these views would simply give different philosophical interpretations of the data: the materialist would see the physical states as constituting the conscious states, the dualist would see the physical states as causing the conscious states (in conjunction with basic psycho-physical laws of nature), the panpsychist would see the conscious states as the intrinsic nature of the physical states. In so far as some neuroscientists are trying to reductively explain consciousness, then of course they are pursuing a goal inconsistent with dualism/panpsychism. But a plurality of different theories are pursued in science and philosophy without it being a problem. Let a thousand flowers bloom!

I don’t understand that form of dualism, which seems explicitly naturalistic, and re panpscyhism he uses psychobabble that doesn’t explain anything. “Let a thousand flowers bloom” is not a good mantra when some of the flowers are stinkweeds, like creationism is to the beautiful blossom of evolution. Panpsychism isn’t a flower, for it hasn’t ever blossomed.

38 thoughts on “Panpsychism hangs around like an unwanted guest”