This year’s Wildlife Photographer of the Year contest, devised by London’s Natural History Museum, had nearly 50,000 entries in several categories of nature photography. The Atlantic published 15 of the winning images, which you can see by clicking on the title screenshot below. I’ve reproduced five of my favorites—two are felids—along with the magazine’s captions, but go see them all; it was a hard choice.

The Atlantic adds this: “The museum’s website has images from previous years and more information about the current contest and exhibition. Captions are provided by the photographers and WPY organizers, and are lightly edited for style.”

Five of the winners:

Watching You Watching Them. Urban Wildlife Winner: What a treat for a biologist—the species you want to study chooses to nest right outside your window. The Cordilleran flycatcher is declining across western North America as the changing climate causes shrinkage of the riparian habitats (i.e. river and other freshwater corridors) along its migratory routes and on its wintering grounds in Mexico. In Montana’s Rocky Mountain Front, it typically nests in crevices and on canyon shelves. But one pair picked this remote research cabin instead, perhaps to avoid predation. The nest was built on the head of a window frame by the female. Both parents were feeding the nestlings, flying out to snatch insects in mid-air or hovering to pick them off leaves. So as not to disturb the birds or attract predators to the nest, Alex Badyaev hid his camera behind a large piece of bark on an ancient spruce tree leaning against the cabin. He directed a flash toward the trunk, so the scene would be illuminated by reflection, and operated the setup remotely from the cabin. He captured his shot as the female paused to check on her four nestlings. At 12 days old, they will probably fledge in a few days. Behind her—the cabin serving as a conveniently spacious hide—the biologist recorded his observations. # 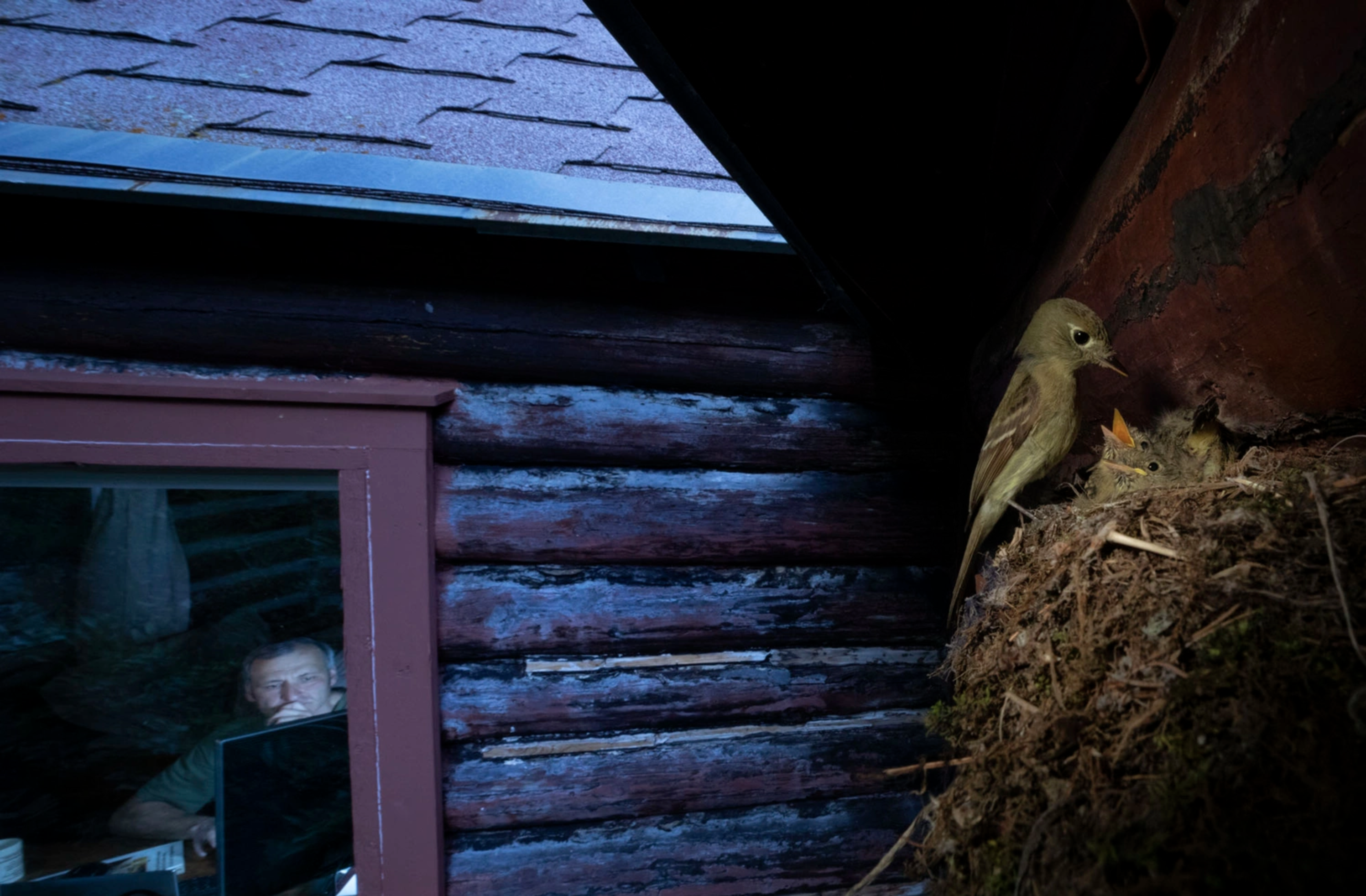 Late Delivery. Behavior Birds Highly Commended: With a beak full of krill, an Atlantic puffin comes in to land on Grimsey Island in northern Iceland. Most of the colony had already settled for the night, and Catherine Dobbins d’Alessio tracked the puffin as it circled in on the wind, lit by the evening sun, giving her a glance as it shot past. The food was for its chick, in a burrow down the cliffside. 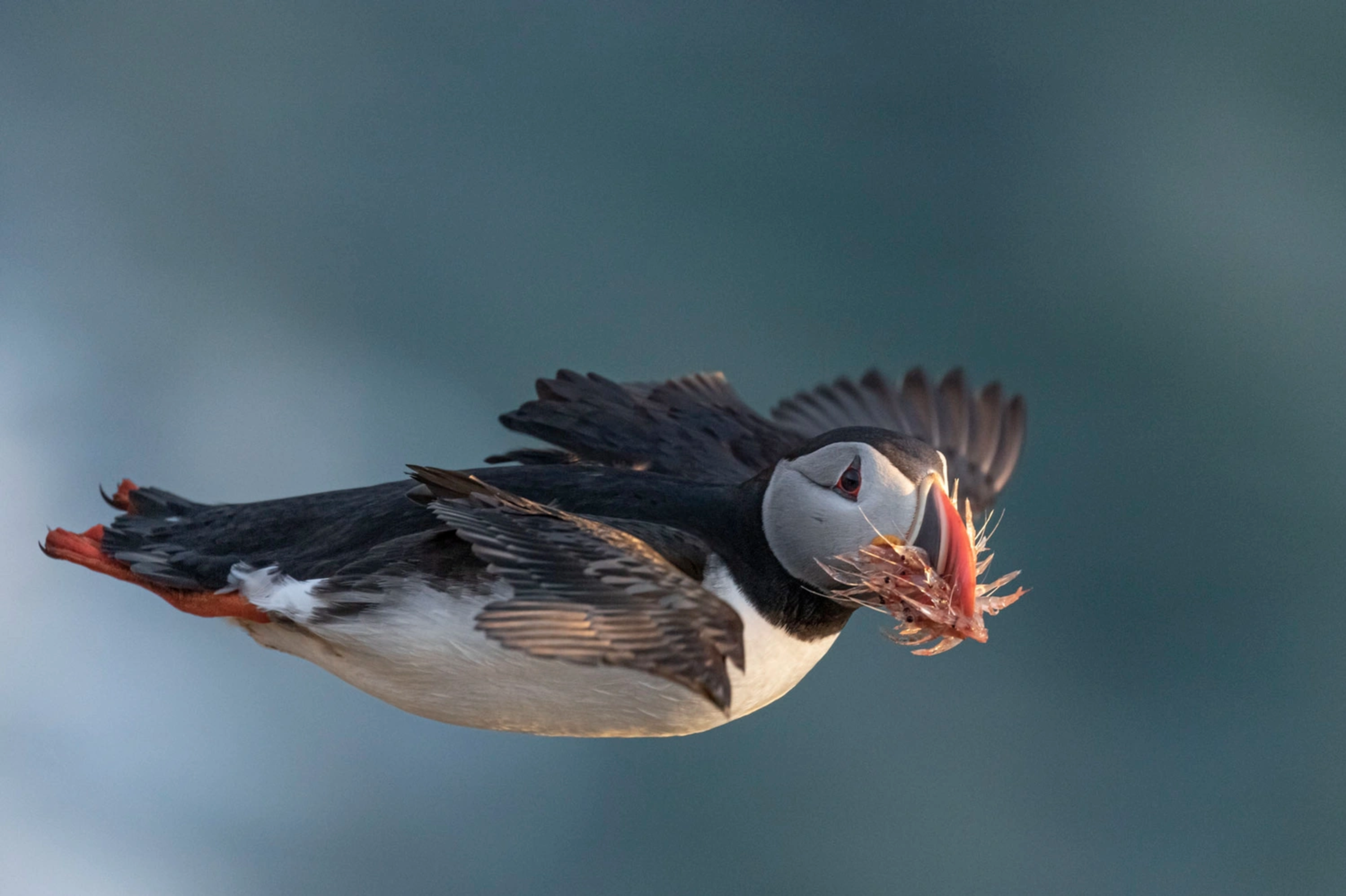 Great Crested Sunrise. Behavior Birds Winner: After several hours up to his chest in water in a lagoon near Brozas, in the west of Spain, Jose Luis Ruiz Jiménez captured this intimate moment of a great crested grebe family. The grebes build a nest of aquatic plant material, often among reeds at the edge of shallow water. To avoid predators, their chicks leave the nest within a few hours of hatching, hitching a snug ride on a parent’s back. Here the backlings will live for the next two to three weeks, being fed as fast as their parents can manage. Even when a youngster has grown enough to be able to swim properly, it will still be fed, for many more weeks, until it fledges. This morning, the parent on breakfast duty—after chasing fish and invertebrates under water—emerged with damp feathers and a tasty meal, and the stripy-headed chick stretched out of its sanctuary, open‑beaked, to claim the fish. 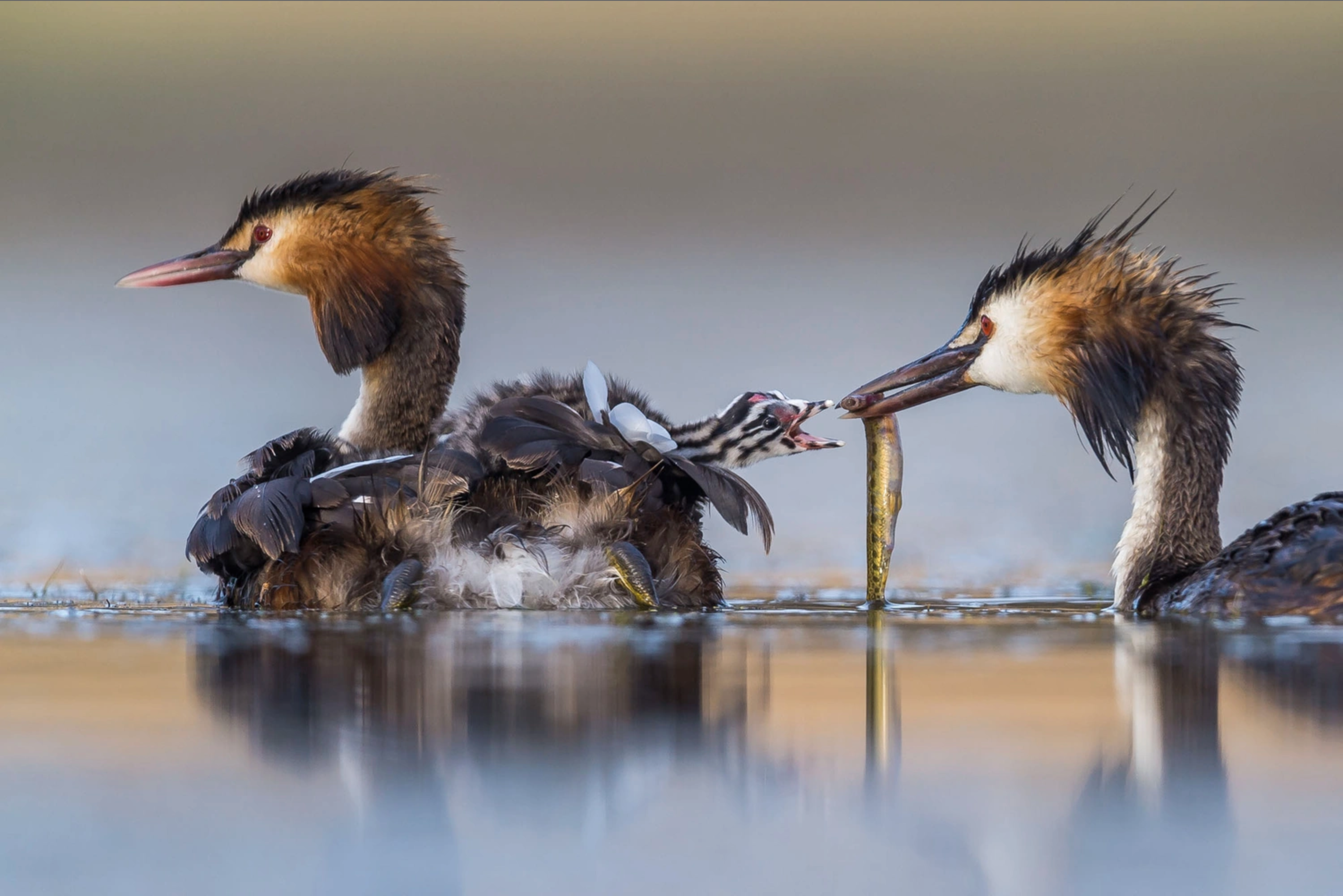 When Mother Says Run. Behavior Mammals Winner: This rare picture of a family of Pallas’s cats, or manuls, on the remote steppes of the Qinghai–Tibet Plateau in northwest China is the result of six years’ work at high altitude. These small cats are normally solitary, hard to find, and mostly active at dawn and dusk. Through long-term observation, Shanyuan Li knew his best chance to photograph them in daylight would be in August and September, when the kittens were a few months old and the mothers bolder and intent on caring for them. He tracked the family as they descended to about 12,500 feet in search of their favorite food–pikas (small, rabbit‑like mammals)—and set up his hide on the hill opposite their lair, an old marmot hole. Hours of patience were rewarded when the three kittens came out to play, while their mother kept her eye on a Tibetan fox lurking nearby. Li caught their expressions in a rarely seen moment of family life, when their mother had issued a warning to hurry back to the safety of the lair. 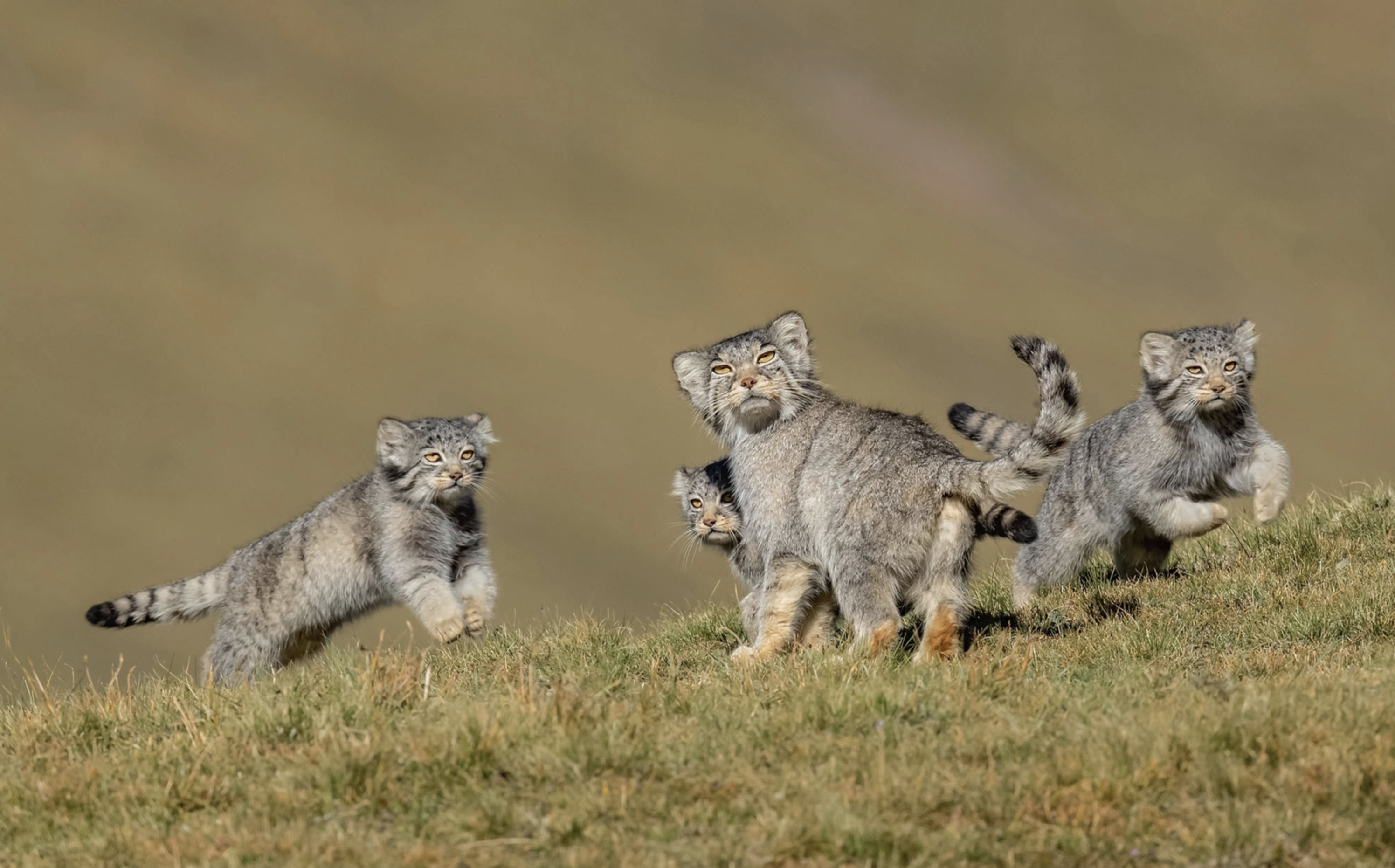 And the grand prize winner:

The Embrace. Grand Title Winner and Animals in their Environment Winner: A tigress hugs an ancient Manchurian fir, rubbing her cheek against the bark to leave secretions from her scent glands. She is an Amur, or Siberian, tiger, in Russia’s Land of the Leopard National Park. Hunted almost to extinction in the past century, the population is still threatened by poaching and logging, which also impact their prey—mostly deer and wild boar. 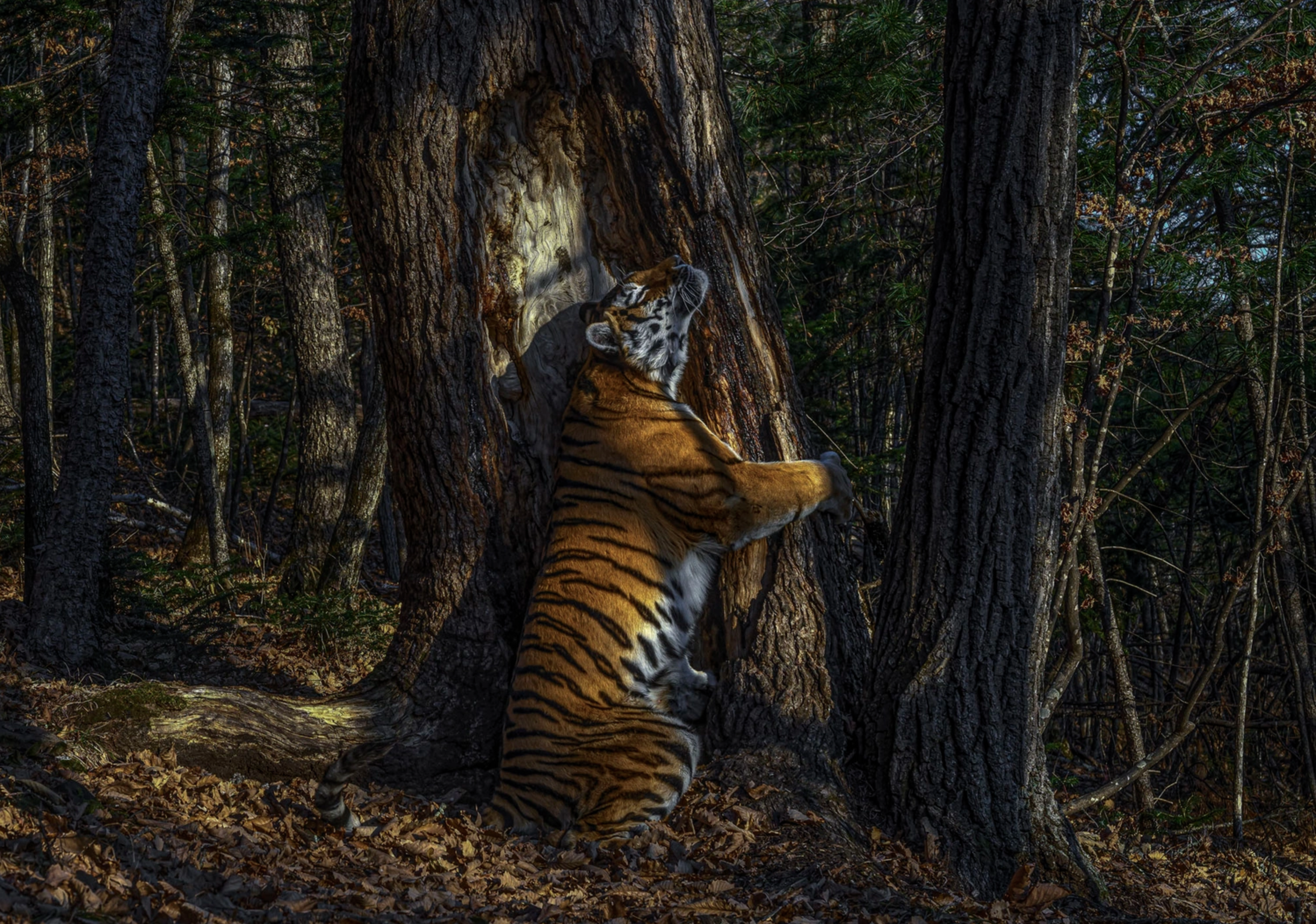 21 thoughts on “Some winners, Wildlife Photographer of the Year contest”