Many of you must have had this experience: walking through the airport, say, and seeing a family of ultra-Orthodox Jews, with the little girls dressed like their mothers, and the little boys sporting sidelocks and yarmukes—all destined to grow up into lives exactly like those of their parents. Or you see a Muslim family, with the little girls wearing hijabs and “modest” clothing.  Or Amish and Mennonites, with the children exact miniatures of the adults. And as with the clothing and hair, so the beliefs.  Those children are doomed—doomed to adopt via indoctrination the religious beliefs of their parents. They will never be exposed to alternative points of view, will never have the chance for lives different from those of their religiously regulated and constricted community.

I find this ineffably sad, for this kind of religious (and cultural) indoctrination is nothing less than brainwashing. Famously, Richard Dawkins called it “child abuse”. And although that term angered many, including parents who assert the right to control their children’s religious beliefs, Dawkins was not wrong. It is abuse to limit the lives of children by filling their minds with religious nonsense as soon as they can understand language.

Reader Andy called my attention to this 23-year-old transcript of a lecture by Cambridge neuropsychologist Nicholas Humphrey: his plenary lecture to Amnesty International. That was nine years before Dawkins’s The God Delusion publicized the “child abuse” argument to the world. Surely Richard derived some of his views from Humphrey, for Humphrey’s are plain, courageous, and eloquent. Further, all of us who have John Brockman as an agent, including Dawkins, read stuff on Brockman’s website Edge, where this essay was published.

Humphrey’s lecture is the best thing I’ve seen written about why parents should not indoctrinate their children with religion, and I recommend it very highly. Click on the screenshot to read the transcript. 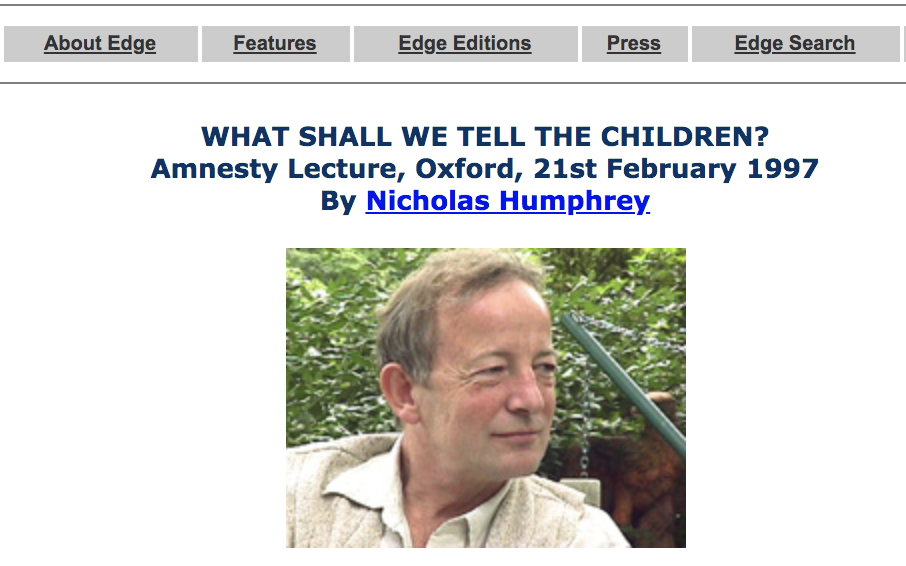 Humphrey is far from “strident” here. Though he’s passionate in his arguments, he also considers possible objections—before disposing of them.  And the gist of his argument is in this excerpt:

I shall probably shock you when I say it is the purpose of my lecture today  [is] . . . to argue, in short, in favour of censorship, against freedom of expression, and to do so moreover in an area of life that has traditionally been regarded as sacrosanct.

I am talking about moral and religious education. And especially the education a child receives at home, where parents are allowed—even expected—to determine for their children what counts as truth and falsehood, right and wrong.

Children, I’ll argue, have a human right not to have their minds crippled by exposure to other people’s bad ideas—no matter who these other people are. Parents, correspondingly, have no god-given licence to enculturate their children in whatever ways they personally choose: no right to limit the horizons of their children’s knowledge, to bring them up in an atmosphere of dogma and superstition, or to insist they follow the straight and narrow paths of their own faith.

In short, children have a right not to have their minds addled by nonsense. And we as a society have a duty to protect them from it. So we should no more allow parents to teach their children to believe, for example, in the literal truth of the Bible, or that the planets rule their lives, than we should allow parents to knock their children’s teeth out or lock them in a dungeon.

That’s the negative side of what I want to say. But there will be a positive side as well. If children have a right to be protected from false ideas, they have too a right to be succoured [sic] by the truth. And we as a society have a duty to provide it. Therefore we should feel as much obliged to pass on to our children the best scientific and philosophical understanding of the natural world—to teach, for example, the truths of evolution and cosmology, or the methods of rational analysis—as we already feel obliged to feed and shelter them.

Now when Humphrey rules out “moral and religious” education, he doesn’t mean “moral” in the sense of “you can’t tell your children that hitting others or bullying them is wrong”. He means “morality as derived from the tenets of religion.” The lecture is in fact solely about religious beliefs, and doesn’t rule out teaching your children the kind of “moral” behavior that’s universally agreed upon by all, including secularists.

I won’t spoil the read for you with more excerpts, except to give one more below. Suffice it to say that Humphrey’s lecture is especially good because (like Dawkins’s books) it anticipates and answers counterarguments. Don’t parents have a right to teach their children their own faith? Even if religion is based on false tenets, isn’t it good to teach children those tenets if it makes them happier? And so on.  Humphrey then explains that religious indoctrination deprives the child of the right to hear about alternative beliefs and lifestyles, a form of learning that, if imparted, could give them richer and fuller lives.  In other words, religious indoctrination is like a mental jail in which children don’t ever get out, never breathing the fresh air of Freedom to Explore.

Lest you think I’m violating my determinism here by talking about “choice”, I’m not: I’m saying that you can make an good argument that not propagandizing children is better for them than forcing them to adopt your own beliefs. And perhaps those arguments will influence the brains of religious parents to lay off their kids, or at least prompt third parties to criticize this invidious indoctrination. Children released from religious “jail” then experience environmental inputs into their brains that can lead them to leave their religious lives behind. As an example, Humphrey mentions the Amish who, when drafted as conscientious objectors, were allowed to work in public hospitals—just as I did. Exposed to other ways of living and thinking, many of these did not return to the Amish way of life. (This stopped when Amish elders, seeing they were losing hold of their kids, got the government to agree to send Amish C.O.’s only to Amish-run farms.)

At any rate, here is the criterion that Humphrey uses to judge religious indoctrination as immoral:

So I’ll come to the main point—and lesson—of this lecture. I want to propose a general test for deciding when and whether the teaching of a belief system to children is morally defensible. As follows. If it is ever the case that teaching this system to children will mean that later in life they come to hold beliefs that, were they in fact to have had access to alternatives, they would most likely not have chosen for themselves, then it is morally wrong of whoever presumes to impose this system and to chose for them to do so. No one has the right to choose badly for anyone else.

This test, I admit, will not be simple to apply. It is rare enough for there to be the kind of social experiment that occurred with the Amish and the military draft. And even such an experiment does not actually provide so strong a test as I’m suggesting we require. After all the Amish young men were not offered the alternative until they were already almost grown up, whereas what we need to know is what the children of the Amish or any other sect would choose for themselves if they were to have had access to the full range of alternatives all along. But in practice of course such a totally free-choice is never going to be available.

And the second paragraph is the rub: there is no way that Orthodox Jews, observant Muslims, or the Amish, much less adherents to many other faiths, could ever refrain from imposing their beliefs on their children, for their religious beliefs and their lifestyle are almost one and the same. How could a hyper-Orthodox Jew bring up a child in a religion-free atmosphere?

But that’s a different question from “Is it wrong to indoctrinate children?”  It is wrong to brainwash your kids. What one should do to remedy the situation is much harder.

At the end of his piece, Humphreys offers one solution: make sure that all children are given a thorough grounding in science in school. Learning to think scientifically, he avers, and learning how to give reasons for what one believes, and think critically, will inevitably make children question all beliefs and, if they decide to be religious, will at least expose them to a variety of religions rather than the one they would have been forced to adopt. (I suspect the most likely outcome of this process, though, is atheism.)

The problem with this, of course, is that children aren’t given much of a scientific education when they’re young and vulnerable, and many—such as young Orthodox Jews or those who go to madrassas—are given no scientific education at all. Critical thinking courses, which naturally align with science, would help, but those aren’t on the menu for many believers, either. Can you imagine the Amish bringing up their children completely free from all religious doctrine, and making them go to secular schools where they learn science?

Humphrey’s arguments for why religious indoctrination is indeed a form of child abuse are eloquent and sound. His answers to those who criticize his views are also sound: parents do not have a “right” to fill their children’s heads with religious nonsense. What is lacking is a way to remedy this universal indoctrination. Humphrey’s own solution won’t work because it cannot be applied to those who need it most. Still, it’s useful for us to remember that this brainwashing goes on for millions and millions of children every day, and many of those children are forced into a narrow, blinkered life they wouldn’t have if they’d been given a better education.