While most cases of Covid-19 are surely contracted via interperson contact (hugging, respiratory droplets, talking next to someone, handshakes, and so on), this new article from Virology Journal, produced by five Australian researchers, suggests that the virus can linger on various surfaces substantially longer than we suspected, and those infection-bearing surfaces (called “fomites”) can carry a viral load large enough to cause infection. Remember when you thought that paper and cardboard could be “disinfected” by leaving it untouched for 24 hours, so that the virus would all die? That doesn’t seem to be the case, at least according to this paper.

Click below to read the screenshot; the pdf is here , and the reference is at the bottom.

The results can be conveyed briefly. The researchers inoculated live virus onto six types of surfaces that might be encountered by people on a daily basis: Stainless steel (cookware, etc.), polymer currency (used in Australia), paper currency (no longer used in Australia but used in many other places), a glass surface (cellphones, touchscreens, etc.), vinyl, and cotton fabric.  The materials were incubated at three temperatures (20, 30, and 40 Celsius, corresponding respectively to 68, 86, and 104 degrees Fahrenheit, respectively), and incubation was in the dark, as UV light kills the virus more quickly (hint, put your envelopes and packages in the light when disinfecting them).  The relative humidity was 50%, though higher humidity also decreases viral survival.

The virus titer is said by the researchers to “represent a plausible amount of virus that may be deposited on a surface”. Samples were taken over 28 days, and the amount of living (i.e., infectious) virus measured by standard methods.

The table below tells you everything you need to know: the D values and half lives (latter in parentheses) for all six materials at three temperatures, as well as the Z values: 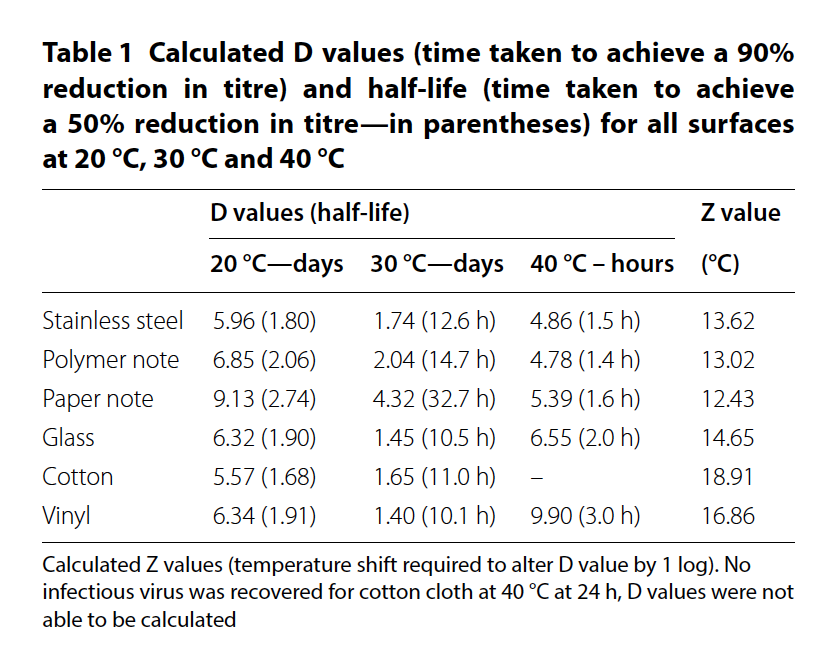 Now what we don’t know about these values, and what is really important, is how much virus has to remain on the surface before it loses its ability to infect you (remember, probability of getting infected is proportional to the amount of virus you pick up and transfer to your nose, mouth, or eyes). This isn’t discussed in the paper, but I’d say a reasonable precaution is the D value: 90% loss of titer.  Perhaps readers in the know can tell us after they’ve read the paper.

But even if you use the half life, at 20°C, two days is a minimum for any surface save cotton (1.7 days). Paper loses half its virus load in three days, and glass in two. But remember, this is in the dark, and half-lives will be shorter in sunlight. Half-lives and Z values decrease dramatically at higher temperatures, though I think 20°C is what we should pay attention to because it’s close to room temperature.  If 10% of the original titer is not enough to infect you, you’ll have to wait 10 days for paper and 6 days for glass. Surprisingly, cotton cloth was the material that retained viable virus for the shortest amount of time.

The Z values show that an increase in temperature of about 15°C is enough to kill 99% of the virus existing at a given temperature.

The researchers also found that except for cotton, viable virus was still found on all surfaces after 28 days.

What’s the lesson for us? Well I can’t say (nor do I wish to purvey public-health advice!), because the crucial information—the amount of virus normally deposited on a surface, and how much of that must remain to give you an appreciable chance of getting infected if you pick it up—is missing. What the authors conclude is this:

The data presented in this study demonstrates that infectious SARS-CoV-2 can be recovered from non-porous surfaces for at least 28 days at ambient temperature and humidity (20 °C and 50% RH). Increasing the temperature while maintaining humidity drastically reduced the survivability of the virus to as little as 24 h at 40 °C. The persistence of SARS-CoV-2 demonstrated in this study is pertinent to the public health and transport sectors. This data should be considered in strategies designed to mitigate the risk of fomite transmission during the current pandemic response.

I guess we’ll have to leave it to the “considerers”, i.e., medical researchers and public health experts, to translate these results into recommended behaviors. But I think it’s smart to disinfect paper for two days instead of one after getting it, and use as little currency as possible (currency is like a circulating Petri dish, carrying E. coli as well as coronavirus. Use your credit card instead, and wipe it off with ethanol or wash it with soap and water after you use it. Put it in the machine, and don’t hand it to anyone unless you have to. Oh, and don’t let anybody use your cellphone.

42 thoughts on “New article: coronavirus lingers on surfaces longer than we thought”