Update: Reader Mike below called my attention to a notice about the paper on Retraction Watch (click on screenshot below). It notes that author Thorvaldsen is an advocate and sympathizer to Intelligent design. The Journal of Theoretical BIology has issued the statement below:

The Journal of Theoretical Biology and its co-Chief Editors do not endorse in any way the ideology of nor reasoning behind the concept of intelligent design. Since the publication of the paper it has now become evident that the authors are connected to a creationist group (although their addresses are given on the paper as departments in bona fide universities). We were unaware of this fact while the paper was being reviewed. Moreover, the keywords “intelligent design” were added by the authors after the review process during the proofing stage and we were unaware of this action by the authors. We have removed these from the online version of this paper. We believe that intelligent design is not in any way a suitable topic for the Journal of Theoretical Biology.

Too little and too late!  There’s also a statement by Glenn Branch, head of the National Center for Science Education. 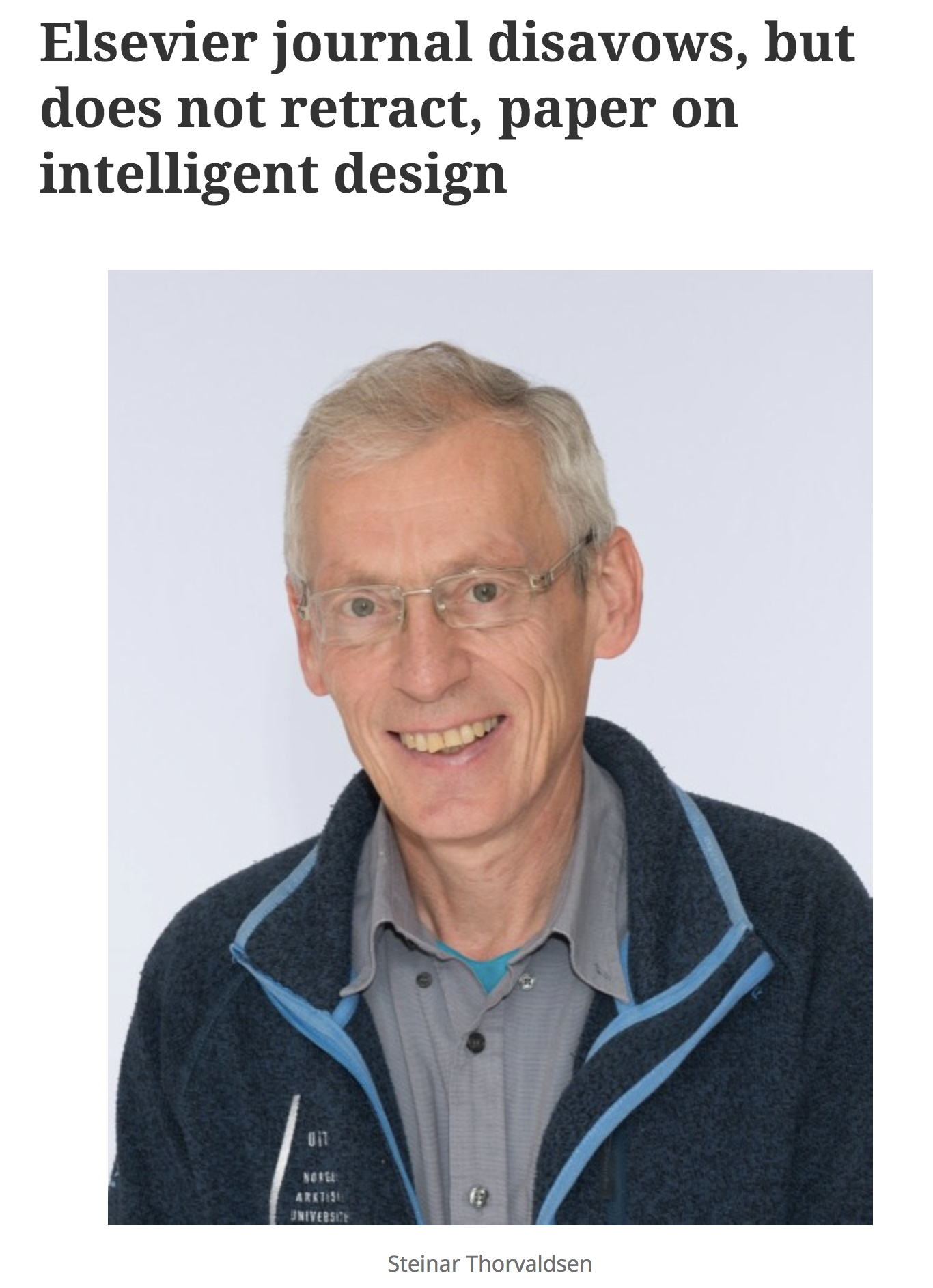 The Discovery Institute and its ID flacks are crowing about a new intelligent-design paper that got published in a reputable journal. The paper is below, and it’s really nothing new: just a reiteration of the supposed unlikelihood of evolving complex biological systems via natural selection (click on screenshot to get the paper, free if you have the Unpaywall app): 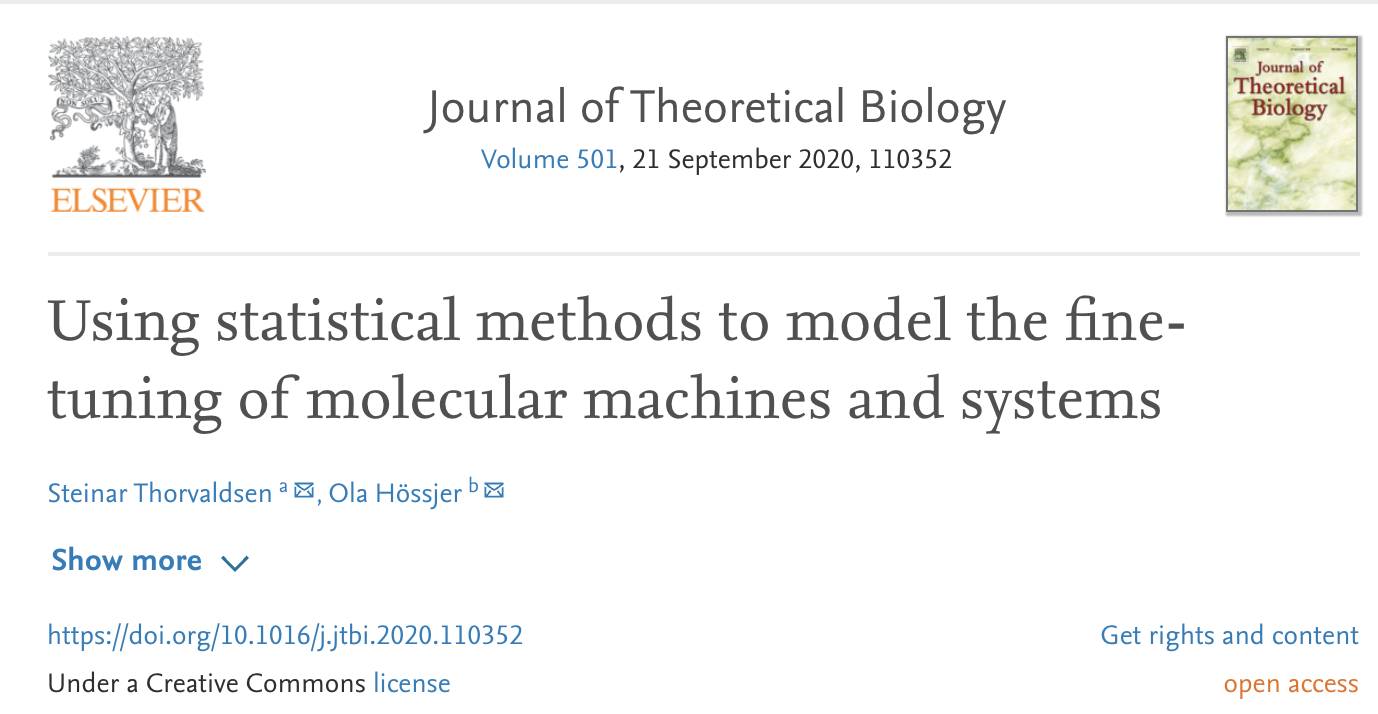 I read the paper very quickly, and decided there was really no there there: it’s a reiteration of the work and thought of IDers like Dembski, Axe, Meyer, and Behe, all of whom have claimed that the evolution of stuff like protein structure, protein folding, protein complexes, RNA translation systems, and so on, are so unlikely that they couldn’t have evolved by Darwinian processes. And of course all of this work has been previously and thoroughly rebutted by real scientists, many of whom have pointed out the flawed assumptions, including making probability calculations starting from scratch rather than using previously evolved and less “complex” systems. Sadly, almost none of the critiques by real scientists are even cited in this paper, which appears to be science-y sounding publicity for Intelligent Design. The failure to cite counterarguments alone should have rendered the Thornvaldsen and Hössjer paper unpublishable.

As for “fine-tuning”, that’s what the authors call “improbable appearance”—that is, a system that, they say “is unlikely to have occurred by chance” and also show “conform[ity] to an independent or detached specification”.  It is, in effect, the “irreducible complexity” touted by Behe, and is not the same thing as the “fine tuning” of the physical Universe—involving the supposed specificity of many physical constants—also touted as evidence for a Great Designer.

Several readers sent me this paper, apparently wanting me to go after it. I just have said my piece, but this is but a cursory take. I didn’t want to put in the time to refute something that’s been refuted before. As for why a good journal accepted such a shoddy paper, your guess is as good as mine. But the IDers see it as a gold mine, because they’ve gotten a peer reviewed ID paper into a journal!

Well, fortunately, someone has discredited this paper much better than I could. It’s good old Jason Rosenhouse, who dealt with it at The Panda’s Thumb, a site that’s been very quiet lately (probably because ID creationism is on its last legs). Jason’s take on the Thorvaldsen and Hössjer paper is at the site below (click on screenshot). His take isn’t either positive or pretty. He concludes that the paper is bullshit (my words, not his), and that it shouldn’t have been accepted in the journal. He gives reasons for this conclusion. Rosenhouse is a math professor as well as someone who knows a ton about both biology and creationism, and so is well qualified to assess the paper’s claims.

I’ll quote just a few bits from the paper. One of Jason’s main beefs is that “fine tuning” isn’t well defined for these biological systems. Further, biological systems don’t evolve the way the authors say, and if you want to calculate probabilities, you have to do it using the way evolution works: sequentially, acting on pre-existing adaptive systems. But I am characterizing his argument. Let me give a few quotes:

The situation only gets worse when [the authors of the paper above] turn to biology. Here their primary example of fine-tuning comes from so-called “irreducibly complex” systems in biology. They even coin the term “Behe-system” after biochemist Michael Behe, who developed the idea in its modern form. The authors write, “[William] Dembski applies the term ‘Discrete Combinatorial Object’ to any of the biomolecular systems which have been defined by Behe as having ‘irreducible complexity’.” Mimicking the approach taken by Dembski in his book No Free Lunch, they go on to write, “Then the probability of a protein complex is the multiplicative product of the probabilities of the origination of its constituent parts, the localization of those parts in one place, and the configuration of those parts into the resulting system (contact topology).” There then follows a bona fide equation, complete with Greek letters, subscripts, and even a big pi to indicate a product.

This is the point where a legitimate peer-reviewer would have thrown the paper aside, refusing to read any further, because every word is nonsense. Complex systems do not evolve through three distinct phases of origination, localization, and configuration, for heaven’s sake. But let’s leave that aside and play along for a moment.

Considering Dembski’s ludicrous assumption that probabilities should be calculated de novo, not using the way evolution works, versus they way they should be calculated—by “imagining the correct configuration arising gradually through a sequence of less effective systems until the modern form appears”—Jason says this:

In No Free Lunch, William Dembski effectively chose the former option in each of these questions, which is why everyone laughed at him. But we obviously need to consider the latter, and we equally obviously have no hope of assigning numbers to any of the relevant variables. Incredibly, the authors even acknowledge this point, writing, “Modeling the formation of structures like protein complexes via this three-part process … is of course problematic because the parameters in the model are very difficult to estimate.” But having just admitted to wasting the reader’s time developing a useless equation, they claim nonetheless that it has heuristic value. It does not, because this three-fold process has precisely zero connection to any real biological process.

Here’s a rule of thumb for you: If an author says he will address the question of whether a complex system could have arisen through evolution by natural selection, and then later says he will use probability theory to address the issue, then you can stop reading right there, because everything that comes next will be nonsense. Probability theory is just flatly the wrong tool for this job because there is no hope of defining a proper probability space within which to carry out a calculation.

But go over to Panda’s Thumb and, if you’re interested in why the new ID paper is garbage, read Jason’s entire review. I must, however, quote his acrid conclusion:

Desirous of keeping this post to a reasonable length, I have focused on what I take to be the absolutely fatal flaw of this paper. The authors claim to have used probability theory to establish a scientifically rigorous and useful notion of “fine-tuning,” but they have failed because we have nothing like the information we would need to carry out meaningful probability calculations. Done.

But I don’t think I’ve adequately communicated just how bad this paper is. The authors are constantly tossing out bits of mathematical jargon and notation, but then they do nothing with them. There is a frustrating lack of precision, as when they variously describe fine-tuning as an object, an entity, a method, and an attribute of a system, all on the first page of the paper. They constantly cite creationist references, with only the most glancing mention that any of this work has been strongly and cogently criticized. They say we should give fair consideration to a “design model” for the origination of complex structures, but they give not the beginning of a clue as to what such a model entails.

In short, it’s hard to believe this paper could have gotten through an honest peer-review process (as opposed to one in which ideology played a big role). Whatever happened behind the scenes, it’s a huge black eye for the journal.

I’m not sure what the Journal of Theoretical Biology will do in the face of objections like Jason’s; clearly other people must have contacted the journal as well. But it is a black eye for the journal, and the paper’s publication should by no means be seen as giving ID any more credibility.

Speaking of which, this is how far ID advocates have fallen. The piece below appeared at the Discovery Institute website Evolution News. (The article also cites the new ID paper.) I find it interesting that that site doesn’t allow comments.