Several people sent me the link to a VICE article (below) arguing that Arab scholars—it’s not clear that all of them were Muslims—essentially hit on the essentials of Darwin’s theory centuries before Darwin, and that their contributions have been neglected.

I have neither the time nor will to give this piece a proper critique, but let me say that yes, people don’t often know about the precursors to Darwin, and there were many who broached some of his ideas.

Evolution in particular was one of them; it would be odd if nobody before Darwin thought that organisms had transformed by one process or another over time. (The key reference here is Rebecca Stott’s book, Darwin’s Ghosts.) One such precursor was Erasmus Darwin, Charles’s grandfather, who wrote several times about the possibility of evoltuion. But, like the Arab scholars below, Erasmus lacked the key novel feature of Darwin’s theory: a mechanism for evolutionary change. And that was natural selection.

As I always say, the essence of Darwin’s theory was fivefold: evolution;  evolution being gradual rather than instantaneous, involving the change of proportion of heritable forms in a population due to differential reproduction; a branching process whereby one original species could produce the millions today, speciation; the concomitant realization that any pair of species had a common ancestor; and, what Darwin saw as his most original contribution, the process of natural selection, which resulted in the appearance of adaptation. (This fivefold contribution was first limned by Ernst Mayr.)

The reason Darwin is given almost full credit for the theory of evolution (which of course has changed a bit since 1859), is that he not only suggested these five ideas in one great work, On the Origin of Species, but also provided evidence for them. Darwin’s “theory” was more than just speculation, for he provided enough evidence to convince most educated Westerners within a decade that evolution was true. (It took another 70 or so years until natural selection was generally accepted.)

Others had thought of evolution before, and a few, most notably the Scot Patrick Matthew, had even come close to the idea of natural selection (as, of course, had Alfred Russel Wallace). But nobody put together all the pieces in as comprehensive and convincing a way as did Darwin. That’s why his theory is more or less sui generis, and owes little to those who mused about evolution before him. (It did owe a lot to geologists and natural historians.)

Yet this VICE article suggests that many people anticipated Darwin, including Arab scholars writing in the eighth century. And the article is misleading in several ways. First, yes, some Arab scholars did broach ideas that organisms transformed themselves over time. But none suggested anything close to natural selection as the mechanism for adaptive change, and a lot of the “transformation” was Lamarckian—not due to changes in the frequency of heritable variants, but to the effects of the environment. Second, none of the scholars, despite the claims of their advocates, had any influence on Darwin’s own ideas. Third, the article below appears to be more than just a corrective in the history of science, but also as a way to empower people of color by showing them that Arabs (apparently considered people of color), had come up with something pretty close to Darwin’s theories a millennium before him. And if the latter is wrong, which it is, then how much empowerment can result? Further, as I argue below, getting people resistant to evolution to come around to it doesn’t depend on scientific “identity politics”, but on overcoming religious objections, for most people oppose evolution on religious grounds. 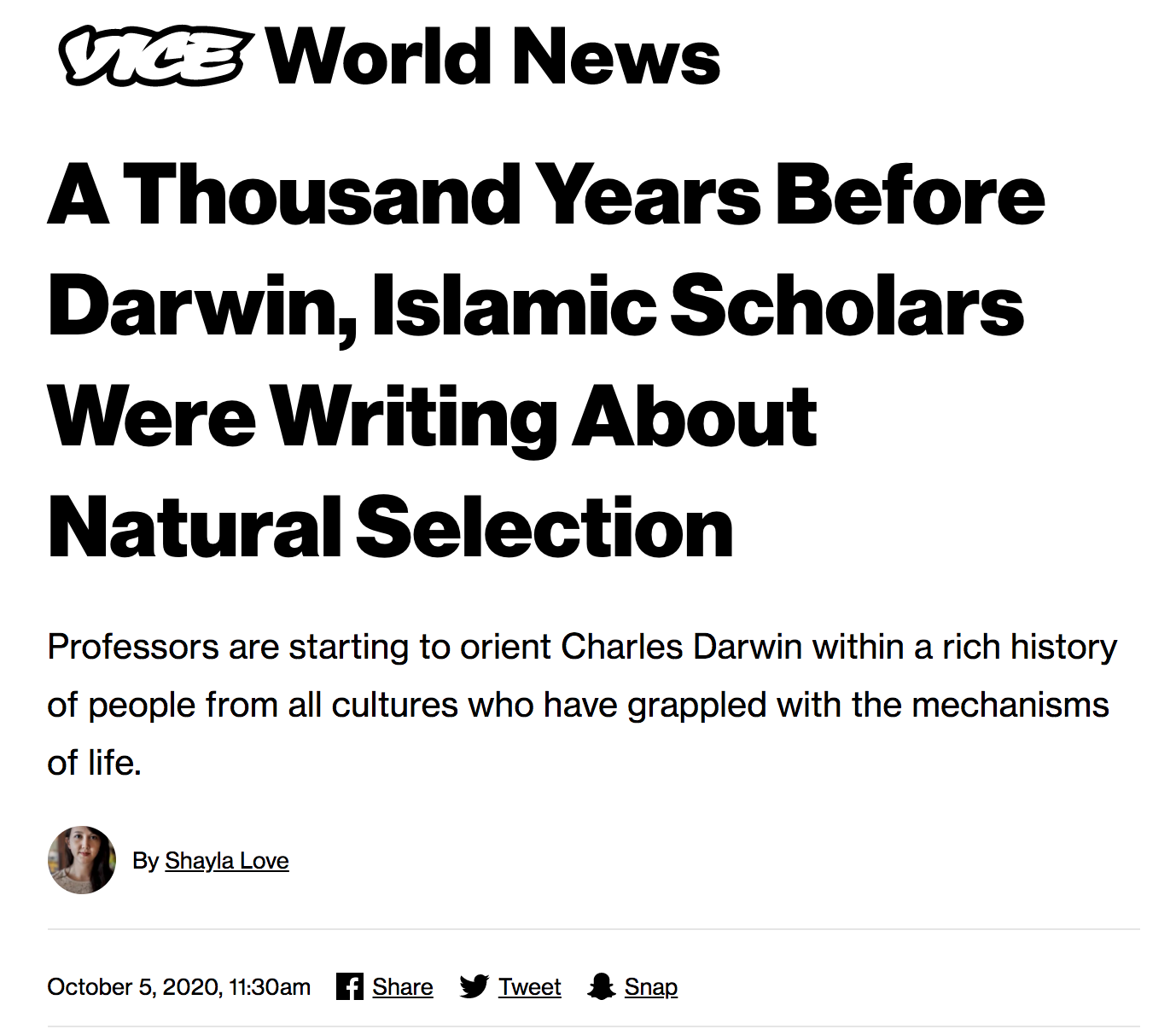 Shayla Love’s piece cites a number of Arabs who supposedly anticipated Darwin, but her article is woefully short on quotations that show how accurate that anticipation was. Let’s take one of the scholars she cites:  Al-Jahiz, who, suggests Love, came up with the idea of natural selection before Darwin.  I found one 1983 paper on Al-Jahiz by another scholar, who gives direct quotes, and it shows that Al-Jahiz never even came close to Darwin (the paper is from Bayrakdar, Mehmet Islamic Quarterly; Jan 1, 1983; 27, 3; Periodicals Archive Online pg. 149). One must be careful in taking the words of scholars who characterize the work of early Arabs; it’s always best to check the original quotes. The paper below is free online, so you can read Al-Jahiz’s quotes for yourself.

And here are some quotes that Mehmet Bayrakdar (the author), say show Al-Jahiz’s own theory of Darwinian natural selection. (The quotes are in quotation marks.)

Struggle for Existence: al-Jahiz placed the greatest weight on evolution by. the struggle for existence, or, in a larger sense, by natural selection. It operates in conjunction with the innate desire for conservation and permanence of the ego. According to al-Jahiz, between every individual existence, there is a natural war for life. The existence are in struggle with each other. Al-Jahiz’s theory of struggle for existence may accordingly be defined as a differential death rate between two variant class of existence, the lesser death rate characterizing the better, adapted and stronger class. And for al-Jahiz, the struggle for existence is a divine law; God makes food for some bodies out of some other bodies’ death. He says, “The rat goes out for collecting his food, and it searches and seizes them. it eats some other inferior animals, like small animals and small birds. . .  it hides its babies in disguised underground tunnels for protecting them and himself against the attack of the snakes and of the birds. Snakes like eating rats very much. As for the snakes, they defend themselves from the danger of the beavers and hyenas; which are more powerful than themselves. The hyena can frighten the fox, and the latter frightens all the animals which are inferior to it. . . This is the law that some existences are the food for others. . . All small animals eat smaller ones; and all big animals cannot eat bigger ones. Men with each other are like animals. .. God makes cause of some bodies life from some bodies’ death and vice versa. . . ”

From what al-Jahiz has said, we can make an assertion that God has created Nature in a prodigal reproductive character and He has also established a law, which is the biological struggle for existence in order to keep it within a limited ratio. Otherwise, the disorder could appear in Nature and it could lose some of its riches and species. We can see the germs of Darwin’s and Neo-Darwinian’s theory of Natural Selection in this remarkable passage which we have mentioned above.

The whole of natural selection is contained in the second paragraph, a single sentence that fails to quote al-Jahiz. Instead, author Bayrakdar refers back to the “remarkable passage” above which shows interspecies interactions and says nothing about natural selection operating among individuals of a species, with differential reproduction causing that species to transform over time. If al-Jahiz was close to Darwin in discerning natural selection from “a struggle between members of the same species”, why didn’t Bayrakdar quote him?

Further, Bayrakdar asserts that “Indeed, Darwin and his precursors took up the theory of al-Jahiz as the base for the essentiality of their evolutionary theories, and they formulated it in a more scientific way in the context of eighteenth and nineteenth centuries development of science.”  Everything in that assessment is wrong. Darwin was not influenced in the slightest by al-Jahiz.

In the VICE piece, Love quotes several other Arab scholars who had ideas about evolutionary change, but none of them come anywhere close to Darwin. (By the way, Love calls Darwin’s book “On the Origins of Species,” getting the title wrong.)

In the end, some of the motivations of Love’s piece becomes clear with her finale:

Including more diverse sources of evolution scholarship could make the study of evolution more accessible in places where it is currently a taboo subject, which can include Muslim countries. It might help for students to see these are ideas that people from their own cultures have been thinking about for thousands of years too.

. . .But for those who think evolution is synonymous with the “West” or atheism, then there might be a level of hesitance that is unnecessary. “If you think that these ideas are only coming from a Victorian era of noblemen, actually that is not the case,” Hameed said. [Salman Hameed is “the director of the Centre for the Study of Science in Muslim Societies at Hampshire College in Amherst, Massachusetts”].

It can have a lot of impact as well for young people of color to see themselves represented in the dialogue of scientific ideas throughout history, said Qidwai.

And even for those not of Arab descent, the inclusion fosters a view of science that is iterative and collaborative, rather than individual. “Multiple people are involved,” Qidwai said. “Different players are contributing in certain ways. It really shows that it’s much more interconnected than, you know, a brilliant person had this idea.”

Now I don’t want to be too hard on this aspiration. It may indeed help Muslims embrace evolution to see that some of their ancestors were toying with the idea centuries ago. And it is interesting to see how the idea of evolution popped up now and again through human history—and not just among Arabs.  Further, we do owe Arabs a tremendous debt of intellectual gratitude—for their work on astronomy and mathematics, for their preservation of Greek thought, which would have been lost had it not been appreciated by Arabs, and for other advances that I don’t have the expertise to describe.

But I don’t really think that recounting this history will move Muslims or people of color towards an acceptance of evolution, for the rejection of evolution is based largely on religion, not on whether science was advanced by people sharing your racial background.

And we shouldn’t imply, as the VICE article does, that although Arabs occasionally broached the idea of evolution, they are important founders of a modern scientific theory.  Darwin’s theory is, like Einstein’s, amazing because of its sui generis character—because it didn’t involve much standing on the shoulders of giants who came before. And that is why we celebrate Darwin (and, to a lesser extent, Wallace), and don’t hail Arabic scholars as unrecognized harbingers of evolutionary theory.

64 thoughts on “Did Arabs come up with Darwinism before Darwin?”