Once again the magazines are hyping Big New Changes in Evolutionary Theory. This time, though, it’s the respected The Economist, which has a policy of not showing the authors’ names. They should have, for some authors should be given an education about their subject, or at least be held accountable for errors. I am surprised that the website has such a long article, though I don’t often read The Economist, so I was unaware that they did long-form science.

Unfortunately, this is not good long-form science because it distorts and exaggerates the evidence for the role of hybridization in speciation.

First, note the subtitle of the new article below (thanks to many readers for sending it to me). “The origin of species is more complex than Darwin envisaged.” That’s not even wrong. Darwin didn’t advance much of a theory of speciation in The Origin, as he had little idea of what a species was. And what he did say about speciation in that book was, as I note on the first page of my and Allen Orr’s book Speciation, “muddled or wrong.” Nobody touts Darwin as an expert on speciation, despite the title of his great book.

The modern theory of speciation began coalescing in the 1930s and 1940s with the works of Theodosius Dobzhansky and Ernst Mayr, supplemented by Ledyard Stebbins, whose big contribution was to show that in plants, a form of hybrid speciation called “allopolyploidy,” was important in forming new species. All of these authors took speciation to mean the origin of reproductive isolating barriers impeding gene exchange between separate species, with the barriers generally arising by selection causing evolutionary divergence between geographically isolated populations.  If substantial barriers arose as a byproduct of that evolutionary divergence, then speciation had occurred.

That view hasn’t changed much, although our view of how species arise has been a bit refined. But it surely hasn’t been “upturned,” as the article implies: what we know about speciation still rests on a scaffold erected 80 years ago. Yes, of course Darwin’s view of speciation has been completely revised, but we’ve known that for eight decades. It’s like saying, “How genetics has upturned the theory of inheritance,” with the subtitle, “The way heredity works is more complex than Darwin envisaged.”

And the major framework of Darwinism, the five-fold thesis that organisms evolved, that they did so slowly rather than instantly (and in a replacement rather than an individual transformation way), that there is a branching tree of life that began with one ancestral species, that all species, living or dead, have common ancestors, and that the mechanism for creating adaptations (the “match” between an organism, its way of life, and the environment) is due to natural selection—none of these five propositions are affected by the discovery that, as the article notes, hybridization is more common than we used to think. Yes, hybridization is more common than we used to think. What is not true—or at least is unevidenced and probably untrue—is that hybridization is a major cause of speciation in animals. (It is in plants.) But have a read below; The Economist piece is free: 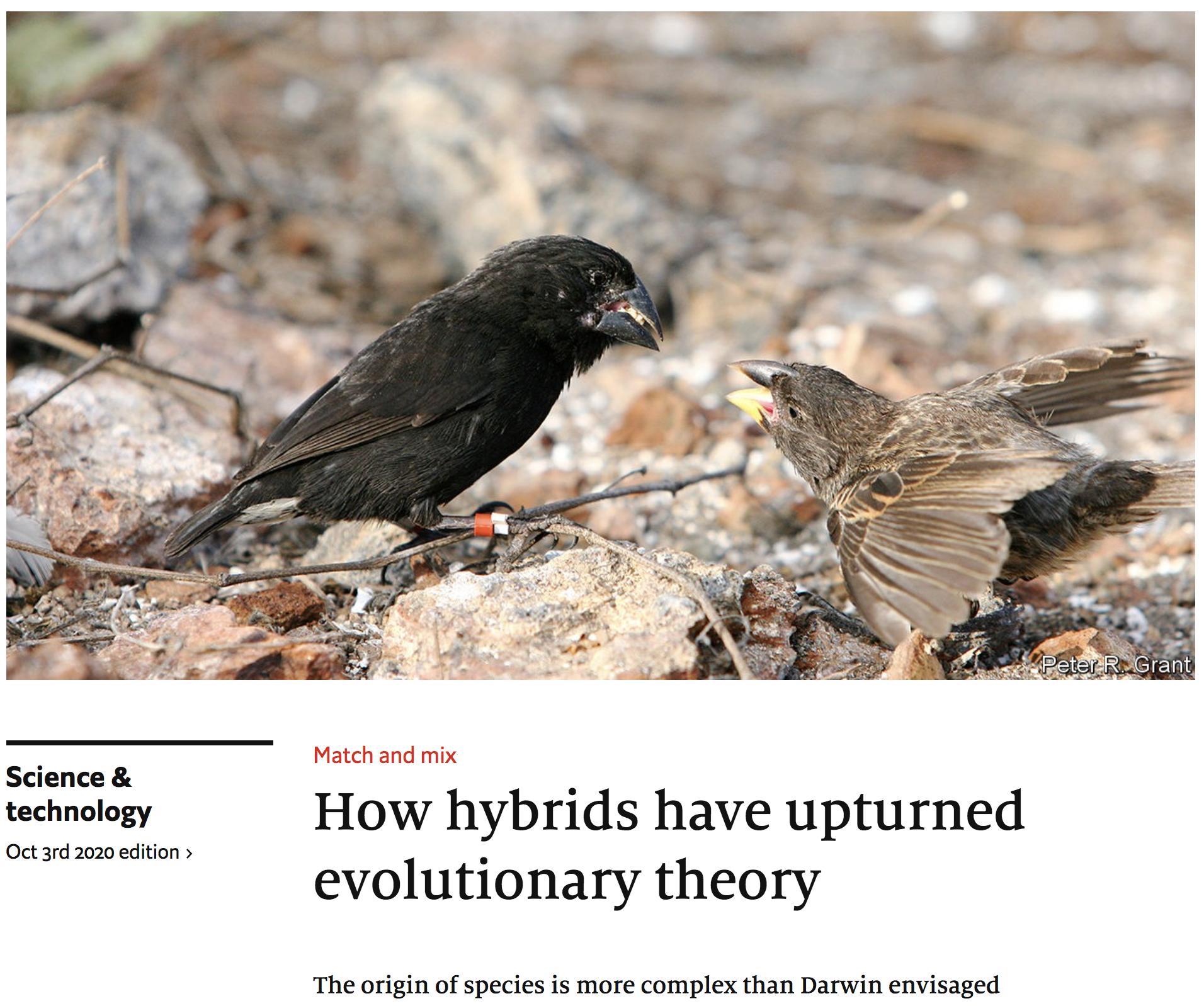 The article was written to show the increasing prevalence of gene exchange between “species” in nature, and, more important, to emphasize that this gene exchange has been instrumental in creating new species. That is, there is a non-Darwinian form of speciation that involves not bifurcation of family trees, but exchange between branches of family trees, leading to new species. That is, here’s how we get new species, and one can say that it is indeed does not lie within the bifurcating-tree framework of Darwinism as limned above (figure from the Evolution paper below): 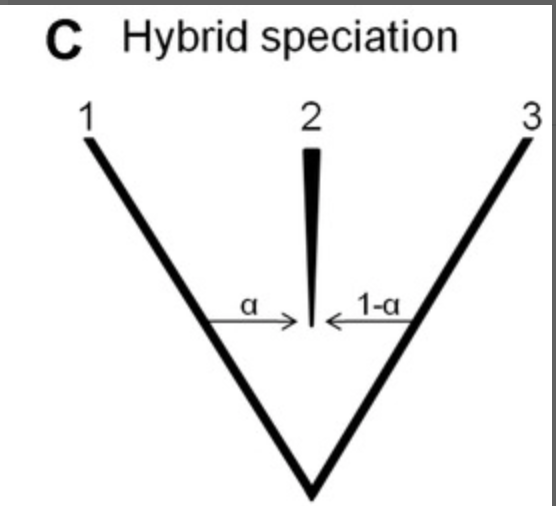 There are two ways this can happen. First, species can produce full hybrids and then the hybrid genome, forming a full population of hybrid individuals, can sort itself out into a new species—that is, a new group of populations that are reproductively isolated from the parental species. And this itself can take two forms. The first, allopolyploidy in plants, involves two plant species with different chromosome numbers (or arrangements) hybridizing, and that hybrid then doubles its number of chromosomes, forming an “allopolyploid” population that will be reproductively isolated from the two parental species. (Hybrids with the parents will produce sterile individuals with three sets of chromosomes.) In my book Speciation with Allen Orr, we show that this kind of speciation is pretty common, accounting for up to 4% of speciation events in flowering plants and 7% in ferns.

The second form of full-hybrid speciation is called “homoploid hybrid speciation”, and involves not an increase in chromosome number, but a normal diploid hybrid forming a population of hybrids, which then evolves into a population reproductively isolated from both parents. The Economist claims this is fairly common. But data I show below suggest it isn’t.

Finally, there is a third way that hybridization can contribute to speciation. That is through introgression: the occasional infusion of genes between species that could be used in adaptation and speciation. (To be part of speciation, those infused genes have to contribute to reproductive isolation between the new “part hybrid” species and its ancestors.) Thus we don’t get an entire population of full hybrids evolving into a new species; rather, speciation occurs in a population that’s taken up a handful of genes from another species through occasional hybrids.  This introgression has happened between modern Homo sapiens and the Neandertals on the one hand and the Denisovans on the other, but it hasn’t lead to new species. That form of introgression is roughly equivalent to mutation on a larger scale, introducing genetic variation that can be (and was, in the case of Neanderthals) used to adapt to environmental changes.

This form of “introgressive speciation”, too, is much rarer than The Economist says, and for the same reasons why homoploid hybrid speciation is rare: we simply don’t have many examples of parental genes in hybrids actually causing the reproductive isolation themselves, though they may cause new morphologies and traits in hybrids that can speciate by more conventional means. (That is, natural selection operates on hybrid or introgressed populations, producing reproductive isolation as a byproduct of the adaptive change, so that genes in the original parents aren’t the cause of reproductive barriers.)

This paper on birds in Evolution, published in 2014, sets out the criteria for homoploid hybrid speciation. Nearly all the examples cited in The Economist piece were already published by then:

Here are the authors’ criteria for homoploid hybrid speciation, the case most emphasized by The Economist:

The criteria, though stringent, seem quite reasonable to apply to claims of hybrid speciation. I won’t go through all the analysis, but just present this graph of how many cases fit each of the authors’ three criteria. Plants are in dark green, fungi in lighter green, and animals in very light green. Note the y axis is number of studies, and it goes up to only fifty. The last column are the cases that fit all three criteria, that is, cases that might well represent homoploid hybrid speciation. Note how low the bar is! 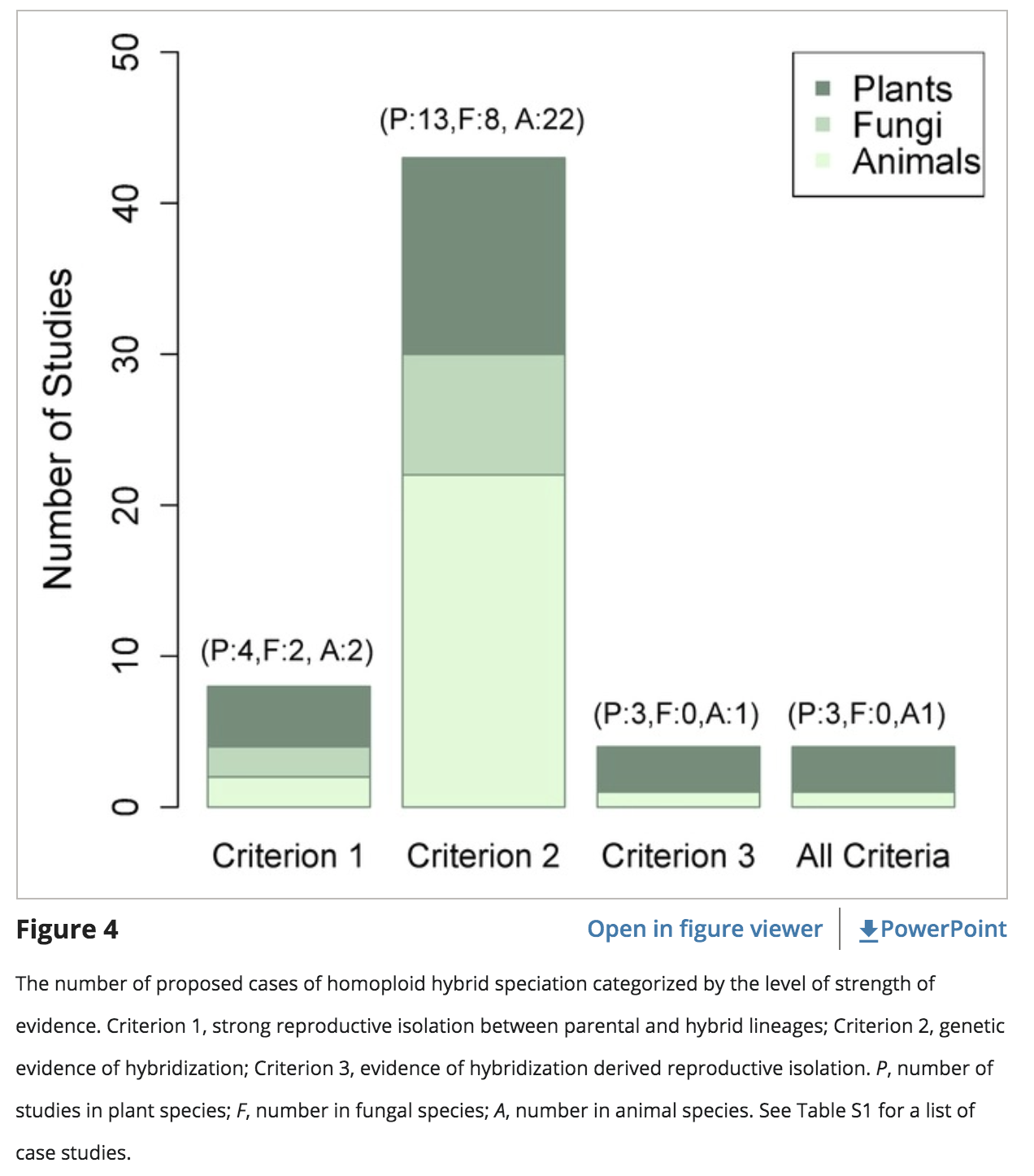 For meeting all the authors’ criteria for homoploid hybrid speciation (last column), we have three cases in plants (all involve the superb work of Loren Rieseberg’s group on sunflowers in the genus Helianthus), none in fungi, and exactly one in animals, the hybrid butterfly species Heliconius heurippa.

The “Big Bird” case of a hybrid species of Galápagos finch that starts out The Economist‘s article isn’t considered, but it, too, is a bit problematic, as it involves a very few finches that show some reproductive isolation but are in a population of very recent origin that hasn’t been examined in about a decade, as I recall. If that small population persists and remains reproductively isolated from the two other finches on the island, we’ll have one more case in animals. That would make a total of five cases of homoploid hybrid speciation among all three groups examined, and that’s a very small number. It’s certainly not enough cases to say that this kind of hybrid speciation has been at all common, much less ubiquitous. Now it may be that there are more cases that we simply don’t know about, but until we find them, we’re not justified in saying that they’re common, much less that “evolutionary theory is upturned.”

A related paper published in 2018 examines claimed cases of hybrid speciation in birds. Click on the screenshot to read it:

Ottenburghs finds only one convincing case of homoploid hybrid speciation in birds: the “Big Bird” case of incipient speciation in Galápagos finches. He finds just three cases in which species form after hybridization but the reproductive isolation is not the direct consequence of hybridization (Audubon’s Warbler, likely to be renamed by the Woke), the Golden-crowned Manakin, and the Italian Sparrow.  So even here, in a group where hybrid speciation is supposed to be common, we have fairly convincing evidence in only four cases.

The upshot.  Considering eukaryotes—I’m not dealing with bacterial “species” here, a complicated issue discussed in Speciation—we have at most five cases of true homoploid hybrid speciation, and then a few more cases of speciation after hybridization in which the reproductive isolation evolves by conventional Darwinian means. There is a difference between hybrid speciation and speciation that occurs via neo-Darwinian processes in a population of hybrids.

In other words, we don’t have near enough data to “overturn evolutionary theory”, or to say that new species often don’t form by a branching process. As far as we know, Darwin’s bifurcating tree is still good for nearly all eukaryotes.

Nor do we think that “Darwin’s concept of speciation as a slow and gradual process” is overturned by homoploid hybrid speciation, which, if it evolves via normal processes of selection and drift, could still be very slow. Yes, polyploidy is quick (a new species arises in three generations), and is not something Darwin considered. But allopolyploidy (the hybrid form of polyploid speciation) has been recognized as an important form of speciation in plants since at least 1950, when Ledyard Stebbins published Variation and Evolution in Plants, drawing plants into the Modern Evolutionary Synthesis. Well, that was 70 years ago. Allopolyploidy is important, but it’s old news.

It seems to me that The Economist‘s policy of not naming the authors of its pieces is not a good one for stuff like this, for the author, whoever he or she is, is represented as giving scientific facts and conclusions. If they’re exaggerated or misrepresented, the author should be held accountable.