Reading the latest edition of The Chicago Maroon, our student newspaper, I saw an op-ed about self care by Ada Palmer, an associate professor of History. I’m not going to write about that; her piece is pretty straightforward and empathic towards our students, who will be having a rather stressful semester. Rather, when I looked Palmer up, I saw that she’d written a review two years ago in Harvard Magazine of Steve Pinker’s Enlightenment Now: The Case for Reason, Science, Humanism and Progress. Always interested in how my colleagues regard Pinker, in arguments for empiricism and rationality, and intrigued by the title of her piece, I read her piece. You can, too, by clicking on the screenshot below. 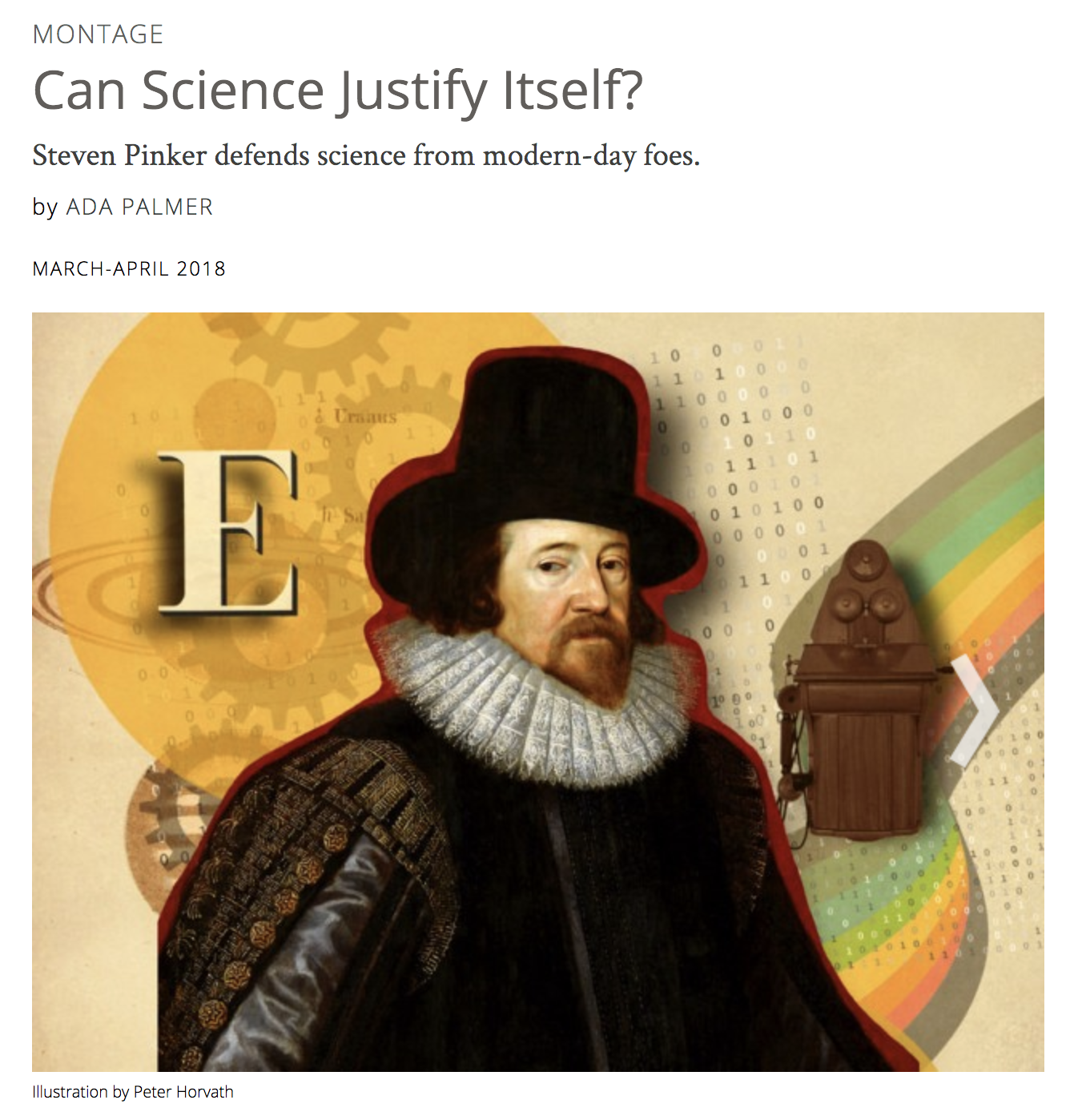 It turns out that Dr. Palmer likes Steve’s book, but has two reservations. The first is that Steve argues that humanism, which is a handmaiden of atheism, is the way forward, and that religion has only been an impediment to moral and material progress. I think he’s pretty much right on that one. But Palmer doesn’t like the atheism bit:

Pinker reviews what he sees as humanism’s intellectual adversaries, such as those who caricature it as cold utilitarianism, those who suggest that humans have an innate need for spiritual beliefs, and the classic accusation, ubiquitous in the Renaissance and Enlightenment, that there cannot be good or virtue without God. For some readers, it will be frustrating that 350 pages of useful and cheering data, the majority of which one could call faith-neutral, culminate in the declaration that only triumphant atheism can ensure that scientific progress will help instead of harm. But Pinker’s secular humanism is less militant than that of many contemporary atheist voices; he focuses on the benefits of caring about the earthly world, rather than on condemning religion. His conclusion, that progress simply requires us to value life over death, health over sickness, abundance over want, freedom over coercion, happiness over suffering, and knowledge over superstition, is one numerous theisms can and have embraced.

Thank God he’s not as militant as Dawkins! God forbid that anyone should condemn religion.

Yes, but of course many theisms have impeded science, reason, and morality, and continue to do so (I’m looking at you, Vatican), while atheism hasn’t impeded those things one bit. After all, atheism is simply lack of belief in gods. The lucubrations above look like either religion osculation or accommodationism. I doubt that anyone could argue cogently that science would be more advanced if everyone became religious. Palmer also mentions “secular evidence” below, as if there was a kind of “nonsecular evidence” for science.

But the main problem with her piece is a recurrent trope that we see among those who wish to minimize the importance of science. It’s the claim that reason itself, or logic, or science itself, cannot prove that science can actually help us understand the universe in a useful way. For philosophers and some in the humanities, the lack of a priori justification that reliance on empirical methods will work is somehow an indictment of science. Here’s how Palmer goes at it:

Pinker briefly reviews efforts to value other factors—love, passions, feeling—above reason, but declares such efforts self-defeating: as soon as they attempt to justify themselves, the very act of providing reasoned arguments for their beliefs admits that reasoned arguments are the strongest grounds for belief. Yet, as I reflect on this argument, I am reminded how science, during a critical moment in its history, was self-defeating in much the same way.

Why was it self-defeating? Because there was no a priori justification for going ahead with empirical observation, hypothesis-making and -testing, and so on as a way to understand nature:

Progress in the modern sense, as an intentional and human-driven process, was first fully articulated by Francis Bacon early in the seventeenth century, when he suggested that a collaborative community of empirical inquiry would uncover useful truths that would radically transform human civilization and make each generation’s experience incrementally better than that of the generation before. This was not the easy sell it seems, since Bacon had no evidence that this unprecedented project could wield such power—and even if he had found evidence, one can’t use reasoned evidence to prove that reasoned evidence can prove things. New discoveries were frequent—the moons of Jupiter, the magnification of insects, the circulation of the blood—but practical benefits were slow in coming.

Well, that’s not exactly true, because people had been using what I call “science broadly construed” to understand nature for millennia. I was impressed, on reading Beryl Markham’s West With the Night, how local trackers used scientific observation to find game: the depth of the tracks, how dry they were, where waterholes were, and so on. There was in fact every reason to think that empirical inquiry would lead to understanding, while prayers and revelation, which any chowderhead would know didn’t help much, weren’t a good way to find animals or decide which plants were edible vs. poisonous.

As for the “practical benefits being slow in coming”, well, I take issue with that. Is improved understanding of the world “practical”. Maybe it won’t make you richer or healthier, but it makes you wiser and more appreciative of the marvels of nature.

In the end, though, I don’t care if you can’t use reason to prove that reason and empiricism “can prove things”. (Actually, they can’t: science doesn’t speak of “proof” but of more or less confirmed hypotheses.) What’s important is that, as Richard Dawkins said pungently, “Science works, bitches!”  The justification of empiricism, reason, and science is in its results: we find out what makes people sick, how to get to the Moon, how to cure disease, and so on. Only somebody hogtied with the strictures of philosophy could see a lack of a priori justification as an argument against the methods and validity of science. Yet we hear this all the time—often from theologians.

Yet Bacon did succeed in awakening a groundswell of enthusiasm (and funding) for reason and science, through an argument that often surprises my students: he appealed to the personality of God, arguing that a good Maker would not send humans out into the wilderness without the means to achieve the desires implanted in us. Thus, because reason is God’s unique gift to humankind, it must be capable of all we desire.

From time to time, particularly in the aftermath of the French Revolution, champions of secularized science have been embarrassed by this comment from Bacon—worrying what would happen if their atheist followers realized that science, at its inception, had no secular evidence to support its own faith in the power of evidence.

Well, the important thing is that nobody’s embarrassed by this argument any more, for the majority of scientists, and nearly all “elite ones” neither believe in gods nor worry about “the lack of secular evidence” to support the power of evidence. As I noted above, long before Bacon we knew that we could understand things without needing “divine evidence.”

But with Pinker’s entire book in hand, Bacon would also have felt the tension between two arguments running through it: the inclusive argument that reason, science, humanism, and progress have made our present better than our past, and can make our future better still; and the less inclusive argument, however eloquently and intelligently presented, that the humane and empathetic humanism capable of turning our powers to good and away from evil must be secular.

Frankly, I don’t care what Bacon would think about the lack of need for “divine” as opposed to secular evidence for science, or about the power of humanism. There’s not an iota of evidence that religion makes people behave better, and often it makes them behave palpably worse. (Remember Steve Weinberg’s dictum: “With or without religion, you would have good people doing good things and evil people doing evil things. But for good people to do evil things, that takes religion.”) And of course the more atheistic a country, the better off it is—by nearly any measure: gender equality, happiness, prosperity, well being, and so on.

But it doesn’t matter, for her main argument, which she reprises in her last paragraph, is both philosophical and a non-starter. Note what I see as a snarky bit in the following (I’ve bolded it):

Pinker is no more successful than Bacon at justifying science and reason without a recursive appeal to science and reason. Yet for those already confident in the persuasive force of evidence, it would be hard to imagine a more encouraging defense than Pinker’s of the reality and possibilities of progress.

What? Is there a large segment of humanity that isn’t confident in the persuasive force of evidence? If so, they shouldn’t be trusting any court decisions, or even their own observations, much less taking planes or swallowing antibiotics.  In my view, nearly everyone is confident in the persuasive force of evidence about most things, though some fraction of humans are confident in things that lack evidence. They include religious people, conspiracy theorists, and cranks. (Oh, and Donald Trump.)

Why does this argument against science keep coming up? It’s worthless!

40 thoughts on “Once again: the supposed need for the self-justification of science”