Although I don’t spend a lot of time calling for people to be unpersoned, canceled, or have their statues toppled or namesakes changed, I do try to discern whether “cancellation” calls are justified or unwarranted. Clearly there’s no good criteria that will work all the time, so it usually comes down to a judgment call.  In general, I tend to side with those who want history left as it is, but sometimes qualified, as with statues of Confederates famous for defending the South. (I favor “counterstatues” or explanatory plaque.) But in many cases, such as the Teddy Roosevelt statue at the American Museum of Natural History, I see no need for revision (see Greg’s post on that here).

My criteria so far have been twofold. First, is the statue celebrating something good a person did rather than something bad? So, for example, Hitler statues fail this test, though I hear that some Nazi statues are simply left to molder and degenerate rather than having been pulled down. Second, were the person’s contributions on balance good or bad? So, though Gandhi was a bit of a racist towards blacks as a barrister in South Africa, the net amount of good he did in bringing India into existence through nonviolent protest seems to me to heavily outweigh his earlier missteps. Gandhi statues should stay.

What if someone was bad on balance but did a good thing—should that person be celebrated? That would be a judgment call.

In general, I err on the side of preserving history, for statues and buildings are a mark of history—of times when our morality was different from what it is today. And it’s useful to be reminded of that rather than simply having our past, especially the bad bits, erased. History, after all, isn’t all beer and skittles. We don’t want a lot of Winston Smiths operating in our culture.

Now, in an article in Quillette, Steven Hales, described as “Professor and Chair of Philosophy of Bloomsberg University of Pennsylvania”, and author of The Myth of Luck: Philosophy, Fate, and Fortune, has added another criterion, one that seems sensible to me.  Well, it’s not really a criterion for determining who should be cancelled, but a way to look at the supposed missteps of figures from the past. I have tweaked it to make it a criterion. 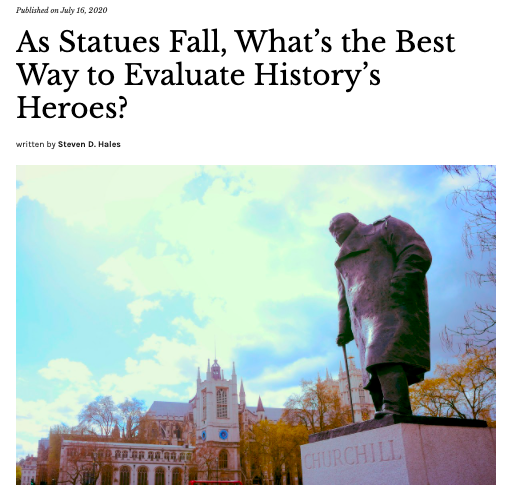 Hales analyzes morality as analogous to science. Science has improved over time in helping us understanding nature, but we don’t denigrate scientists who made honest errors in the past. (Miscreant scientists, like Lysenko, are a different case.) Similarly, morality improves over time. (I don’t think there’s an objective morality, but surely the way we run society has allowed flourishing of more people over the past few centuries.) To Hales, it makes as little sense to denigrate those who went along with the morality of their time as to denigrate those scientists who accepted the “received wisdom” of their time. As he says:

All of which to say, there is a vital difference between being wrong and being blameworthy. Einstein struggled to admit the fact of quantum entanglement, but that does not entail his blameworthiness as a scientist. In one clear sense, he was on the “wrong side” of quantum history, but that doesn’t necessarily merit demotion from the pantheon. Scientific praiseworthiness or blameworthiness is determined not by the standards of our times, but of theirs. While you can hardly blame Darwin for not knowing the unit of natural selection, you would certainly blame a modern biology undergraduate if she did not know about DNA. Nonetheless, it is Darwin who deserves our admiration and praise, even if today’s undergrad knows more than he did.

And so we should judge people by the “average” moral standard of the time, which I interpret as meaning that if someone wasn’t considered immoral in their own society, but had values and beliefs that were fairly standard, then we can’t fault them too much today, for people are products of their genes and environments.

Anyone who thinks that right moral thinking is obvious, and is incredulous at the horrible beliefs of the past, is the unwitting heir to a philosophical fortune hard-earned by their forebears. The arc of the universe may bend towards justice, but it is a long arc. As with scientists, moral actors of the past also fall into the great, the average, and the bad. Our judgment of them shouldn’t be by the standards of our own times, but the standards of theirs. By the moral understanding of his day, Vlad the Impaler was still a monster. But should we say the same of St. Paul, who in his Letter to Philemon, returns Onesimus, a runaway slave, to his owner instead of providing the slave with safe harbor? While Paul’s letter includes a request for Christian mercy, he omits condemnation for the horror of slavery. Paul was no slave trader, but the moral views displayed here were typical for his time.

By these lights, Hume, who gave approbation to a slaveholder, wasn’t the monster he seems to be today, as acceptance of slavery wasn’t seen as immoral back then as it is now. Morality has evolved for the better. I think it’s misguided, then, to “cancel” Hume, as they’re trying at Edinburgh with a building name, because of one “misstep” in a life that was otherwise very useful and salubrious.

Now of course this criterion has its own problems, the most obvious being “what was the ‘received’ moral wisdom of the time?” For example, Darwin was not in the majority of Brits of his time in being an abolitionist. Should we expect people of Darwin’s era, then, to adhere to the “best” morality, or simply to an “average” morality—one that wouldn’t get its adherent labeled as immoral in his society? Since there are always some angels in society, however rare, I’d go with the latter criterion.

This doesn’t solve all the issues, for of course the Nazis adhered to the average anti-Semitic morality of their times, and we don’t want people to put up statues to Nazis or label buildings “Goebbels Hall.” How do we judge an “average” morality? Morality among all humans on the planet in a time when people can read, learn and think, or the morality obtaining in one’s immediate surroundings? I have no answer.

Nor do I know how to combine Hales’s criterion with the ones I’ve held previously. All I know is that I have a mental algorithm about who should be canceled, and few people fall on the “yes” side, mainly those with no redeeming lives, acts, or thoughts.  Nor should we laud people today for things that were once considered okay, but now are seen as bad. Hume deserves to stay because he was not only a great man and a great philosopher, but also because he wasn’t the equivalent of a Nazi.  Finally, I don’t have problems getting rid of art that shows things that really are considered universally offensive: like a mural showing a lynching in the South.  Clearly, we will never get everyone to agree on these issues.

But as for Darwin, Gandhi, Jefferson, George Washingon and yes, with qualification, Robert E. Lee—let them stay. As they say, those who don’t remember history are doomed to repeat it.

65 thoughts on “Another criterion for judging whether to “cancel” someone”