I’ve just finished reading Steve Stewart-Williams’s recent book The Ape That Understood the Universe (Cambridge University Press, revised edition 2019). I recommend it highly as a good way to get not only an introduction to evolutionary psychology, but also to see why the discipline is worthwhile and why its detractors are often misguided. Click on the screenshot if you want to buy it from Amazon US. 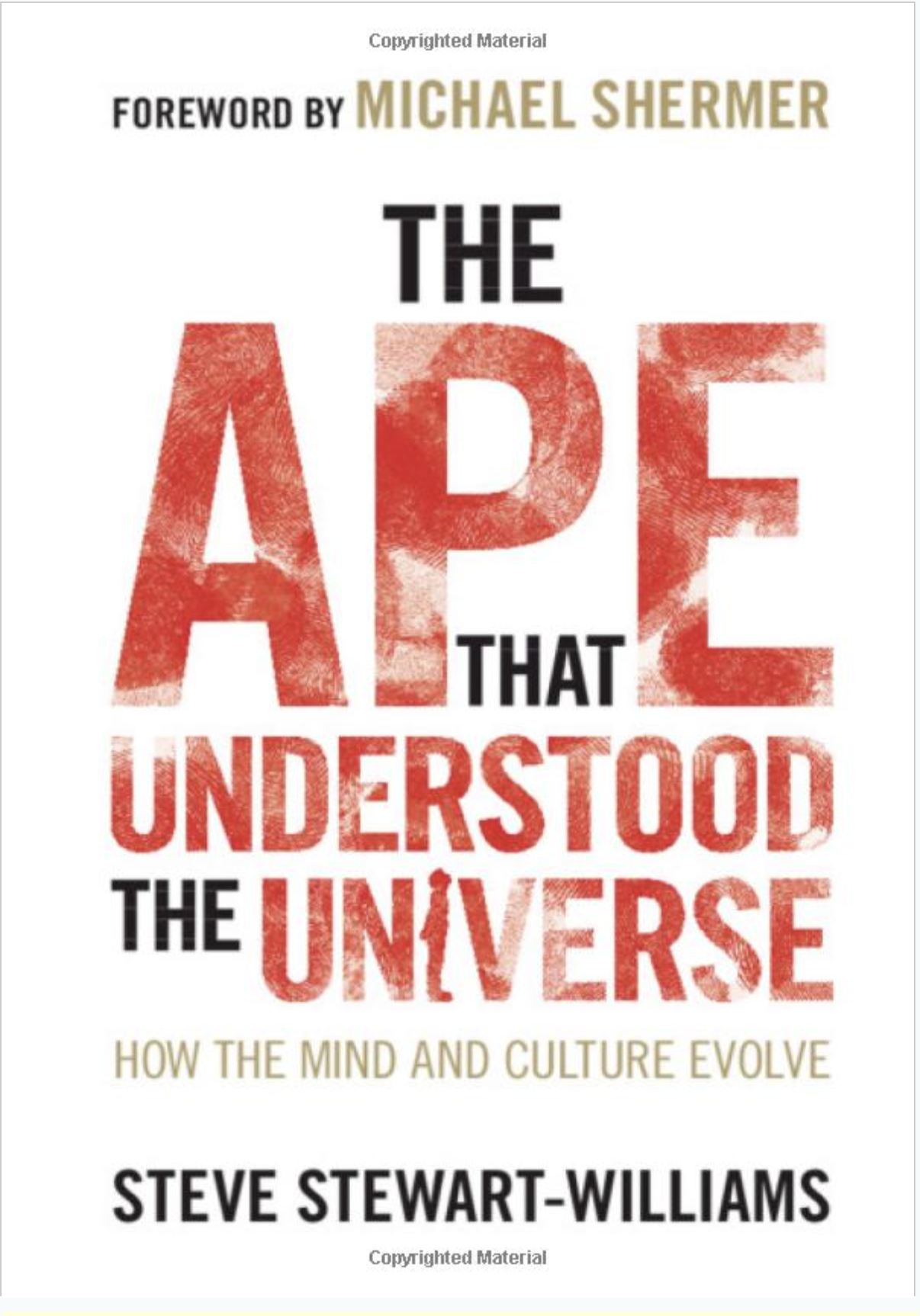 I have to hedge my encomiums a bit, because while most of the book—the first part that deals with evolutionary psychology—is excellent, the second bit, only the last 64 pages, is weaker. That’s the bit that deals with memes, the popular but, I think, misguided view that we can understand human cultural evolution by assuming it’s propelled by memes, “units of culture” first dreamed up by Dawkins in The Selfish Gene. While memetics sounds good at first glance, and has become incorporated into popular jargon as “an item that’s gone viral on the Internet”, I have always questioned its value as a way to understand how ideas and objects spread in human culture—indeed, supposedly creating human culture. I explained my criticisms in a 1999 Nature book review of Susan Blackmore’s book The Meme Machine, and won’t reiterate them at length here.

But the biggest part of the book is well worth reading, particularly because Left-wing biologists have denigrated evolutionary psychology at length, calling it not only worthless, but meaningless. I won’t name these miscreants, but suffice it to say that their motivations are largely ideological: they think that if human behavior—particularly behavioral differences between groups and especially between men and women (but also behavioral “universals”)—are partly instilled in our genome by natural selection, then that will justify xenophobia, misogyny, and all kinds of bigotry.

This claim isn’t true, of course. As I’ve mentioned repeatedly, to say that our evolutionary past justifies how people should treat others, or construct a morality, is deeply misguided: “the naturalistic fallacy.” And to accept that natural selection has molded human bodies and physiology, and has done so within the last 10,000 years (see here), but then to deny that natural selection has affected human behaviors, including differences between the sexes that sometimes parallel those seen in animals, is a nonsensical and unparsimonious view.

Further, evolutionary psychology as a discipline is neither worthless, unproductive, nor tautological. After describing how natural selection operates on genes (including kin selection and the production of cooperative behaviors), Stewart-Williams takes up some topics in evolutionary psychology and shows that the discipline has indeed produced testable and confirmed hypotheses, particularly those involving aspects of human sexual behavior as well as behavior toward kin and group-mates (“altruism”).

Stewart-Williams is no uncritical booster of evolutionary psychology, readily admitting that some of its advocates have gone overboard. But you don’t throw out the baby with the bathwater, and in an appendix called “How to win an argument with a Blank Slater”, Stewart-Williams takes up and rebuts some of the most common criticisms of the discipline (e.g., “evolutionary psychology is the latest incarnation of genetic determinism”, “hypotheses in evolutionary psychology are either just-so stories or are unfalsifiable”, and so on). Hypotheses in the discipline are often testable and falsifiable, and one of the strongest parts of this book is the description of data that support hypotheses about the evolution of behavior, as well as some description of tests that have failed. Like Darwin, Stewart-Williams is always anticipating readers’ queries and criticisms, and addresses them throughout the book.

The discussion of human “altruism”, always a puzzling topic, is also quite good, with Stewart-Williams lucidly describing the various ways what we think of as “selfless behavior” could evolve (kin selection, small-group tit-for-tat strategies, and group selection, which he considers unlikely). All in all, I strongly recommend you read at least the first 218 pages on evolutionary psychology, as well as Appendix A on arguing with Blank Slaters.

You should also read the last chapter on memetics (“The Cultural Animal”), but do so with an especially critical eye. Although Stewart-Williams’s aim in the book is to explain human behavior and society as a result of both biological and cultural evolution, he’s much more successful with the former than the latter. That’s not to say that he doesn’t have good insights into cultural evolution, for he does. It’s just that the addition of “memes” doesn’t, in my view, add much.

I’ll give just one example. Most of us love apple pie and ice cream, and Stewart-Williams considers this a meme whose spread needs explanation. The classical explanation of memetics is that ideas spread when they parasitize human brains and have features that are good for the memes themselves to spread, though those features may not be adaptive for individuals or society (he uses smoking as one example). So it goes with apple pie à la mode:

Two examples will illustrate the point. [JAC: I give just the first.] The first is apple pie and ice cream. The apple-pie-and-ice-cream meme has prospered in human societies because it powerfully activates the brain’s pleasure centers—more powerfully, in fact, than anything in our natural environment. Eating too much of the stuff isn’t good for us, but that’s irrelevant. The meme proliferates, not because it’s good for us but purely because it’s good for itself—purely, that is, because it’s good at proliferating. To be clear, it doesn’t want to proliferate or know what’s good for it, any more than genes do. It’s apple pie! The idea is simply that if we want to understand which memes come to predominate in a culture, then rather than looking at how memes affect our fitness or the fitness of our groups, we need to look at how they affect their own chances of being passed on.

But to assert that the apple-pie-a-la-mode meme has properties that make it good at proliferating is simply tautological, and not in the way that the spread of genes is said to be tautological. What, exactly, about this meme helps it spread itself among Americans or Brits? What makes it good for itself? As far as I can see, nothing. What makes it spread is simply that apple pie and ice cream taste good, and taste better than alternatives like, say, donuts and ice cream. While Stewart-Williams admits that this dessert “activates the brains’s pleasure centers,” the real explanation for why this dessert “meme” is popular would involve understanding why it tastes better than alternatives. As I wrote in my Nature review of Susan Blackmore’s book:

. . . Blackmore’s enterprise has two fatal flaws. First, she has got the chain of causation backwards. The claim that memes created major features of humanity is equivalent to the claim that the main force driving the development of better computers has been the self-propagation of software. In reality, computers are usually designed for speed and capacity, which then permits the development of new software. Similarly, the self-replication of memes does not mould our biology and culture; rather, our biology and culture determine which memes are created and spread. What a world of human psychology is obscured by Blackmore’s mantra, “If a meme can get itself successfully copied it will”! To me, memetics boils down to the following obvious theory: ideas tend to spread if they cater to our desires to have love, comfort, pleasure, power, sex, the attention and admiration of others, a meaningful life and a way to evade the awful fact of mortality.

This brings us to the biggest problem: memetics seems completely tautological, unable to explain why a meme spreads except by asserting, post facto, that it had qualities enabling it to spread. One might as well say that aspirin relieves pain because of its pain-relieving properties. The most interesting question — why some memes spread and not others — is completely neglected. Why did Christianity take hold during the waning days of the Roman Empire? You won’t find the answer, or any way to attain it, in memetics. (This, by the way, makes memetics utterly unlike biological evolution. The spread of genes through natural selection is not tautological because one can predict their fate through their known effects on replication and the reproduction of their carriers.)

Nothing is gained in understanding the spread of apple pie and ice cream by considering it a “brain parasite,” which Stewart-Williams does.

I think Stewart-Williams recognizes this problem with memetics, for he deals with it in Appendix B: “How to win an argument with an Anti-Memeticist”. Here we find the following passage, which starts with a criticism of memetics in italics and then the his rebuttal in plain text.

The hallmark of a good scientific theory is that it generates research: it makes novel predictions about the world, which lead scientists to make otherwise unexpected discoveries. Memetics, however, has been woefully unsuccessful on this front. Indeed, the field’s flagship journal, The Journal of Memetics, had to close its doors because it didn’t get enough submissions.”

[Stewart-Williams’s answer]: This is the “if you’re so smart, why aren’t you rich?” criticism. Of all the criticisms on offer, it’s probably the one that worries me most. In the end, though, I think it fails. It is certainly true that memetics has yet to deliver much in the way of new research. It’s also true that many specific meme-based explanations have yet to be adequately tested. However, when it comes to evaluating a theory or explanation, what we ultimately want to know is not how many publications it’s generated, or how many surprising discoveries, bur rather something more basic: whether or not the theory is true.  That, in the final analysis, is what science is all about.  And despite the current research shortfall, there’s good reason to believe that, at least in its general outline, memetics is indeed a true and accurate theory.

But how can we know if a theory is true if it doesn’t propose tests or potential falsifications? Stewart-Williams tentatively accepts the truth of memetics because he says it makes sense: cultural entities appear “designed to benefit themselves”, even if they harm individuals or groups. (Yes, too much pie is bad for you, or, as the jolly Almus Pickerbaugh said in Arrowsmith, “too much pie makes pyorrhea.“)  But how, exactly, does the apple-pie-and-ice cream “meme” benefit itself? Can you predict this in advance from simply the existence of the combination? Well, perhaps you could predict it if you knew how its gustatory constituents interacted with human brains, but that’s a psychological explanation that has nothing to do with the “self spreadability” of the pie-and-ice cream meme.

In the end, you have to judge whether a theory is true based not on intrinsic plausibility but on whether it survives empirical tests. In my view, the empirical “tests” of memetics boil down to post facto explanations of why something spread based on some characteristic of the cultural unit itself. And here memetics has, as Stewart-Williams admits, failed. It doesn’t explain much and doesn’t seem falsifiable because memeticists always seem able to confect a reason why something had to spread, independent of human tastes, needs, or psychology. It is intrinsically an unfalsifiable theory.

I’ve written a lot about memes because it’s a bugbear of mine, not because it’s the major topic of Stewart-Williams’s book. It isn’t. And so I recommend that you read the book, if for no other reason than to see why the critics of evolutionary psychology are largely misguided. But you’ll also learn a lot about how natural selection works, and how it’s forged an appreciable part of human behavior.