During my allotted reading time yesterday, I treated myself to a movie instead. I’ve seen many of the most recent ones that were highly regarded, so I Googled “best movies 2019” and came up with one I hadn’t seen that got wide acclaim: “Portrait of a Lady on Fire“, a French film directed by Céline Sciamma.

I won’t give a spoiler, though there’s really just one spoiler. The film, which takes place in the mid-18th century, stars Noémie Merlant as Marianne, a painter who travels to an island off of Brittany to paint Héloise, played by Adèle Haenel, who recently left a convent. Héloise’s mom, the Countess, wants to marry her off to a man in Milan, and to do so she must send a picture of her daughter to the prospective groom. As there were no photographs then, the Countess commissions a painter to come to the island to do the job. But since Héloise doesn’t really want to get married to the guy, she refuses to sit for any painters. Marianne, then, is instructed to act as a companion for Héloise, observing her surreptitiously during the day so she can paint a portrait at night.

Although the film really has just four characters, all women (there’s also a servant girl in a subsidiary role), Marianne and Héloise occupy nearly all the screen time, and the film’s about how their relationship develops as they spend time together. Eventually they fall in love, Marianne confesses her mission and Héloise decides to sit for her portrait. The denouement of the two-hour film is sad but moving.

And a clip from the movie showing the women during a portrait session:

I was surprised that this movie wasn’t nominated for an Academy Award. It’s mesmerizing, the acting is superb, and the cinematography is beautiful (it won Best Screenplay at Cannes).

This is a slow-paced movie about characters, not events, and won’t appeal to those who go to action movies that consist of one long chase scene (the default blockbuster these days). Rather, it’s like “Tokyo Story”, in my view one of the best movies ever made but one that I hesitate to recommend to friends because there’s no action, and some have found it boring.

“Portrait of a Lady on Fire” blew me away, and I can’t recommend it highly enough, though I don’t think it got much publicity. It certainly did get approbation: here’s the Rotten Tomatoes critics’ and audience’s summary (click on screenshot): 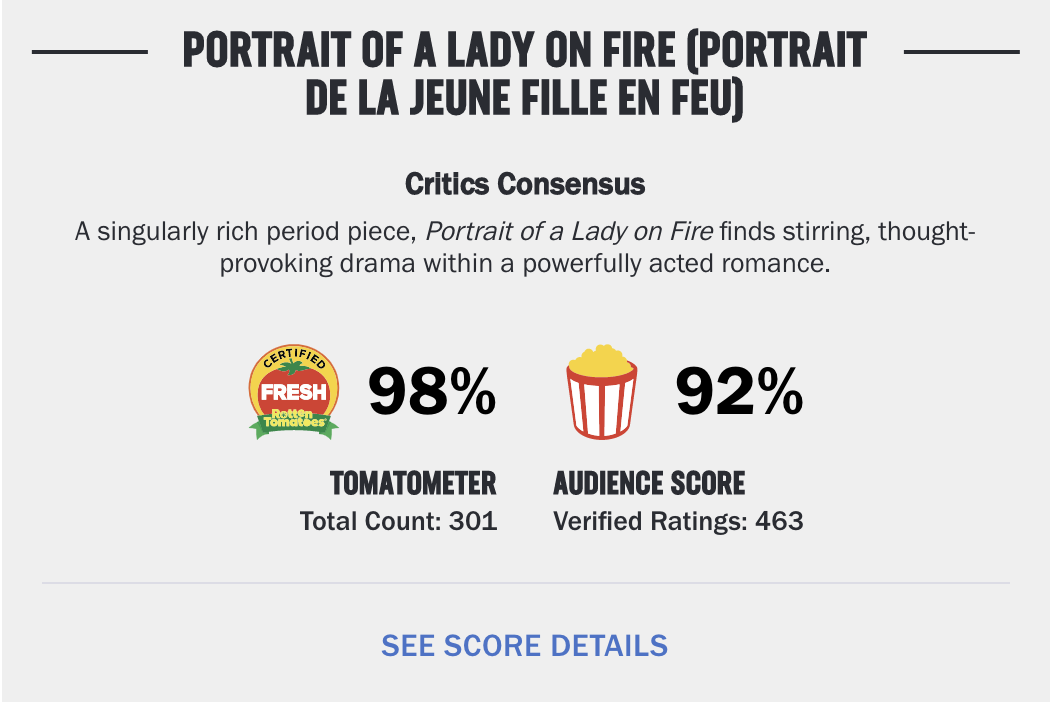 You can see a very positive video review here.

If you’re a movie fan (the kind they call “cinemaphile”), you’ll like it a lot. See it online.

And be sure to put in the comments the names and a few words about movies you’ve seen lately—good or bad. Since nearly all theaters are closed because of the pandemic, nearly all of us must be watching our movies online.

41 thoughts on “An enthusiastic movie recommendation”