There is no area these days that is immune from charges of systemic racism. The authors of the article below, published in The Journal of General Internal Medicine (JIGM) single out medical education. You can read the article by clicking on the screenshot below, or get the pdf here. Below the first screenshot you can find a precis of the journal article from the Yale School of Medicine website, but it’s not much shorter than the original two-page article, which will be the one I’m discussing and quoting from.

At any rate, medicine may indeed have racists working in it—indeed, there’s some evidence quoted in the article that black patients don’t get treated as well, medically, than white ones, and also some quasi-racist misconceptions about blacks from doctors. But I’m not so sure you’d call that “systemic” racism—a racism imbued in the system.

But never mind about that. Insofar as there is racism in medical education, the question is how to eliminate it. The authors propose a simple solution: keep racists from getting into med school. They couple that with the notion that you’d want to preferentially admit students not just who aren’t racists, but who are deeply committed to social justice. After all, you can not be a bigot but have other interests besides further social justice.

This all raises several questions. Is the ditching of racist candidates something we should be concentrating on?. If so, how do we do it? What degree and kind of racism should keep you out of med school? Will the proposed methods work, or just drive bigotry underground? Is any racism grounds for dismissing a candidate? If a candidate isn’t that committed to social justice, but has other extraordinary talents that are worthwhile (outreach, general empathy, etc.), will those help her?  I don’t know the answer to any of these questions, except that the methods proposed are rather authoritarian and would seem to be easily obviated by bigoted students intent on becoming doctors. The set of procedures (there are many) smacks of the approved “diversity statements” that some schools require from candidates for academic jobs—statements that can get you rejected at the outset even without your credentials being vetted (see posts here).

From Yale Medicine, a summary: 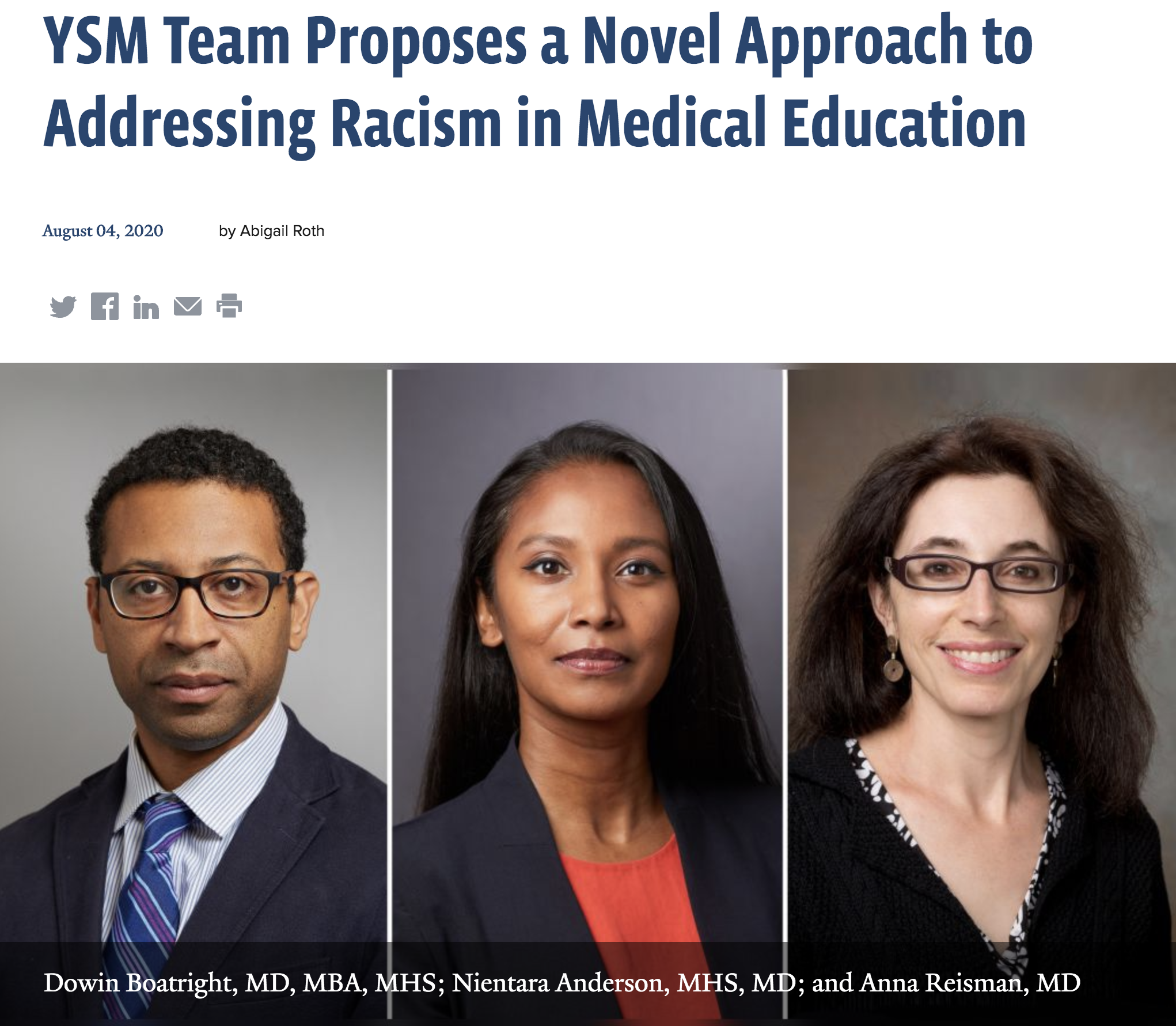 The obligatory disclaimer: First, I support initiatives to increase the diversity of medical school students and their teachers, as well as medicine in general. Further, I’m not denying that minority students may face bigotry in medical school, or patients may face bigoted doctors. Nor am I in favor of letting invidious racists into med school when their bigotry is seen as a serious problem for their work. But, as authors like Robin DiAngelo incessantly inform us, all white people are racists to some degree (we have “implicit bias”), so the problem becomes what degree of racism is tolerable in a med school applicant?  And that’s where the problem comes in, because the ways these authors suggest for sniffing out the racists smacks of heavy-handed Critical Race Theory. They even mention intersectionality, for you might want to sniff out those who are bigots on several axes.

Let’s review the methods the authors suggest for ferreting out racists who apply to med school. These come after the authors argue that “medicine is a white space” (i.e., it is full of prejudiced white people intent on “marginalizing the black person, actively reminding him of his outsider status to put him in his place”).  They cite some evidence of racism, and do note that med schools have tried to dismantle the “white space” with diversity-enhanced curricula and faculty, as well as “education on implicit bias and microaggressions.” But, they imply, this is not enough:

. . . Medical school admissions and residency programs could build on some of these current modes of evaluation to ascertain whether applicants hold racist beliefs or invalid and fixed views on biological differences between races.

The ways of vetting (all indents are quotes from the JIGM article):

For example, a short questionnaire could be used to flag significantly uninformed individuals who may not yet be ready to care for patients or interact with their non-white peers in a respectful manner. Applicants could be given surveys adapted from studies on implicit and explicit bias.

As far as I know, “implicit bias” tests have been found to be flawed and faulty. But that aside, questionnaires, interviews, and essays will of course alert students who, knowing that even the hint of racism is grounds for dismissal, will do all they can to look like social-justice warriors. Explicit bias tests must surely be easy to defeat, and it can’t be that hard to tweak an essay to look really woke, even if you’re a Proud Boy.

Application essays are also opportunities to understand an applicant’s views on race in medicine. Many medical schools, including Yale School of Medicine, include secondary essay prompts about applicants’ perspectives on “diversity.” These essays could be enhanced to more clearly elicit applicants’ positions on race: for example, reflecting on their own racial or ethnic identity; or responding to selected passages by prominent scholars on race and medicine, such as Dorothy Roberts or Harriet Washington.

Again, if you have any neurons at all, you can simply say what you want the committee to hear. In contrast, you can’t fake your credentials, test scores, or college grades, or (unless you’re Lori Loughlin’s kids) your accomplishments.

Interview questions evaluating applicants’ views on race could be similar to essay prompts or they could be more direct questions, such as “Do you think Black patients are more likely to be poor historians than white people––and if so, why?”

Now what would you say to answer that question if you wanted to get into med school. The right answer is clearly “no”. (I don’t even understand the question, though.)

4.) MMIs. (These are “multiple-mini-interviews––where applicants rotate through several rooms responding to different prompts––to assess qualities such as communication, empathy, professionalism, integrity, and ethical reasoning. My emphasis below

MMI scenarios could be based on discriminatory experiences reported by minority faculty, trainees, and students: a peer implying that an underrepresented minority (URM) medical student was admitted only because of “affirmative action”; a professor suggesting that race is biological; or an attending telling a patient not to take a racial slur “so personally. Due to the intersectional nature of identity, MMI scenarios could be designed to touch on multiple forms of discrimination simultaneously. MMI stations could also ask applicants to respond to a summary of a study on racism in medicine.

This has a bizarre similarity to those “quick dating” scenarios where someone rotates among potential dates quickly, spending a few minutes with each. It also reminds me of rushing at fraternities in college: an experience so distressing, because you knew you were being evaluated quickly and on the basis of a few sentences, that I dropped out after the first day. To me, this doesn’t sound like a good way to vet candidates.

Student-hosted discussions of race in medicine could involve students and trainees of color engaged in racial justice work or affiliated with groups such as the Student National Medical Association (SNMA) or the Latino Medical Student Association (LMSA). Host students or trainees could then evaluate candidates’ racial attitudes in a more informal setting.

Given the wokeness of students these days, this sounds even more fraught. One misstep, or one misinterpreted word, and you’re gone. And if you don’t adhere down the line to Critical Race Theory, you’d be toast.

Interviews by minority community members could assess applicants’ attitudes about non-white patients. In White Coat, Clenched Fist, Dr. Fitzhugh Mullan described such a strategy. He recounted how parents from the South Bronx formed Lincoln Hospital’s Pediatric Parents Association (PPA) and participated in interviewing residency applicants in the 1970s. Mullan recalled that “mothers from the PPA spoke up right from the start, often asking tough questions about applicants’ attitudes towards blacks or Puerto Ricans.

I’d prefer to leave the professionals—those who work for med schools, do the vetting, especially if the admissions committee is diverse (see recommendation #7). If this strategy was so efficacious, how come it appears to have died in the Seventies.

Diversifying and educating admissions committees and interviewers is essential, because they will be responsible for locating a given candidate on a continuum of racial attitudes which would then be weighed as part of their overall candidacy.

I have no issue with this, though diversity historically has rationales other than sniffing out racists. Rather, on admissions committees it’s a way to ensure that minority candidates get a fair vetting, at least partly from those in their own ethnic group who, presumably, have had similar experience.

As the authors note, these procedures aren’t designed just to eliminate students who are racists, but to “select for students who are committed to social justice.” But why limit these methods to med schools.? Since all areas of academia, especially STEM fields, are said to be “white spaces” and riddled with systemic racism, why limit this kind of vetting to med schools? After all, don’t those fields also need scholars committed to social justice? One might answer that, well, it’s especially important for doctors to treat patients in an unbiased fashion, but biases in fields like STEM are said to cause large amounts of harm, both psychologically and to people’s career prospects. Indeed, this is the reason why schools like the University of California are mandating diversity statements for job applicants in other fields.

Finally, as I noted above, what about those students who are neutral on the racism scale, perhaps showing a tiny bit of implicit bias but with no outright racism, but with a terrific background in other desirable traits, like doing outreach or having terrific lab skills that could make him a great medical researcher? How much racism counts against these other talents? In the University of California, those other talents aren’t even considered unless your diversity statement passes a threshold of acceptability (and that bar is pretty high).

In the end, the authors admit that people can change (then why boot out the purported racists at the outset?), but they don’t use a very good example to show that:

To be sure, people’s beliefs can evolve, especially in environments that strive to change curricula, diversify medical schools, and counteract racism in medical culture. This was the approach taken by the Black Panther Party, which not only rigorously evaluated physicians for their commitment to racial justice before allowing them to practice in their clinics, but then required those physicians to receive a “re-education” on race and anti-colonialism even after they had been accepted as volunteer medical staff.

“Re-education” smacks not of the realization that you could do better, but of an attitude drilled into people through force and propaganda. That’s hardly, I think, what the authors would want to inflict on med students. Or would they? Perhaps!