It’s Wednesday, which means that it’s Jesus and Mo Day, and posting this may get me banned in Pakistan again, LOL.  Today’s strip, called “blues,” came with an email note:

Charlie Hebdo have published the 12 Danish cartoons, plus one of their own, on today’s cover. It marks the beginning of the trial of 14 alleged accomplices in the massacres of January 2015. It shouldn’t require bravery to publish cartoons, just as it shouldn’t require anonymity, but it does. Charlie Hebdo is doing more than anyone to change this situation. They deserve much more support than they get.

It’s vexing but not surprising that I couldn’t find a copy of the Charlie Hebdo cover, despite several Liberal Big Media reports about that cover (e.g., NPR, The Washington Post, and the New York Times). Just like the Yale University Press, which published a book in 2009 about the reaction to the Danish cartoons without showing any of them, the media are scared as hell of retribution from Islamic extremists.

Here Jesus and Mo differ on the new cover: 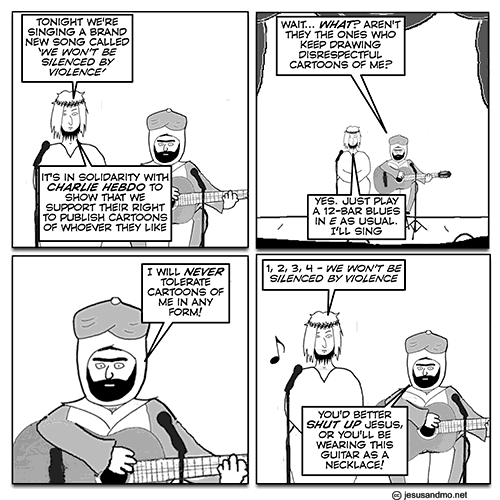