Until recently, those on the Left who were not sufficiently “progressive” were criticized for their words: not saying the right thing. Now, according to the article below, you get damned for your silence. Or, if not that, you’re compelled to say certain words and phrases.  In part, says author Jonathan Turley, this change comes from the doubly misguided slogan “silence is violence,” which has been applied to several causes.  Turley is a professor of law at George Washington University specializing in civil rights, a renowned legal scholar, and author, and a broadcaster. But he’s concerned. Click on the screenshot to read his piece in The Hill:

In a previous column, I warned of the thin line between speech codes and commands, as people shift from compelling silence to compelling words. “Once all the offending statues are down, and all the offending professors are culled, the appetite for collective suppression will become a demand for collective expression.” Such a line between punishing and compelling speech is easily crossed if free speech itself is viewed as a threat.

. . . We are now watching the fear realized. A mob surrounded diners outside several Washington restaurants, shouting “white silence is violence” and demanding that diners raise a fist to support the movement. Some diners dutifully complied as protesters screamed inches from their faces. Lauren Victor said she marched with protests but refused to be bullied. The mob surrounded her, and Washington Post reporter Fredrick Kunkle eventually identified one freelance journalist as one of the people yelling at her face and loudly demanding, “What was in you? You could not do it?”

. . . The current transition from speech codes to commands is based on the same notion of speech as harm. Just as speech is deemed harmful, and thus subject to regulation, silence is now deemed harmful. University of California Berkeley law professor Savala Trepczynski, also the executive director of the Henderson Center for Social Justice, declared that “white silence is incredibly powerful” and that “it acts like a weapon.”

I had to see if the restaurant bullying indeed happened, and it wasn’t hard to find this tweet, and then a video in the WaPo article linked in the previous paragraph. It’s chilling, and reminds me of nothing other than the Cultural Revolution, with the ideologically impure (in the case of Lauren Victor, one actually sympathetic to the cause but unwilling to be bullied) being publicly shamed and demonized. The hectoring freelance journalist was Chuck Modiano, who writes for Deadspin.

There are several more examples, but I’ll give just two more.

Syracuse University moved much more directly not just to prohibit but to mandate some forms of speech. Professor Keith Alford, the diversity and inclusion officer of the college, declared students would be punished for simply witnessing “bias motivated” incidents and “acts of hate.” That was the response to demands by a student group for expulsion of “individuals who witnessed the event or were present but did not take part.”

This is the ultimate sanction: punishing students who only witness but don’t participate in “hate speech”.  You can see the supporting evidence at either Turley’s own website or The Post Millennial.

And one more incident (well, two) that I checked out, which again happened to be true:

Such concern over speech codes turning into speech commands would have been viewed as absurd just a few years ago. Now calls for civility in dialogue are denounced as racist dog whistles. Trinity College professor Johnny Williams said those who want civility uphold “white supremacist” capitalist power. When news host Joe Scarborough criticized those who confronted diners at restaurants and asked for more civility, University of Mississippi professor James Thomas denounced it and said, “Do not just interrupt meals. Put your whole damn fingers in their salads.”

It is the ultimate expression of entitlement. People either must conform to your values or face the public condemnation and threats. Your salad is no more inviolate than your speech. In a world where silence is violence and civility is complicity, there is little room for true free speech.

You can see Johnny Williams’s views in a coauthored piece at Inside Higher Ed. And the tweet by James Thomas, shown by the South Mississippi station WLOX. (I’m betting the tweet is deleted now.) 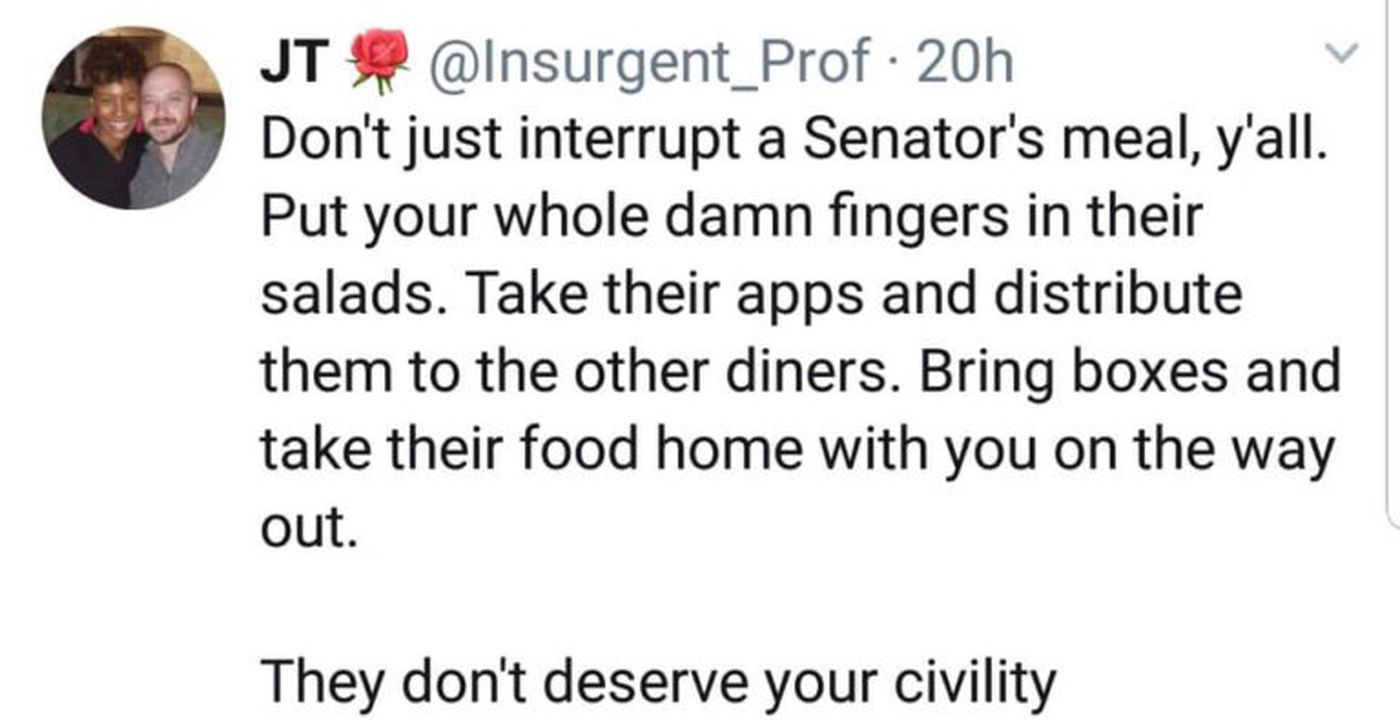 Before the last election, I criticized those who called out the Impure (all Republicans) in restaurants or other public places where they appeared with their families, trying to enjoy a meal. While some readers thought that harassing people in restaurants was perfectly fine, I couldn’t do it, and I think those who do, or who approve of it, are crossing the line. After all, would you like a Trump-ite to yell at you and your family while you’re eating out? I didn’t think so.

Here’s one more example that was sent me by Matthew Cobb. Here you have to start a virtual group meeting with the obligatory confession that you’re a racist. I haven’t verified this one, but Northwestern’s law school has been beset by student demands that they hire more black faculty, which constitute only 5% of the professors there. (Click on the screenshot to see all the confessions.)

This last one is the most chilling. What kind of atmosphere (and inducement to confess) would lead these people to abase themselves in this way? And why is it relevant? The worst part is that I see no sign of this authoritarianism abating.