Although I’ve never met Caruso, I consider him a philosophical confrère, as he’s a hard determinist who has no truck with notions of contracausal free will (classical you-could-have-done otherwise free will that’s the basis of Abrahamic religion). Not only that, but he thinks, as do I, that the rejection of conventional free will should absolve us of moral responsibility and therefore lead to big changes in the justice system.

He’s thought a lot harder about this than I have, and has written about the issue in several books, which you can see here. He’s debated free will with Dan Dennett, a compatibilist who thinks that you can have both determinism and free will; and Gregg tells me that he has a book coming out next January called: Just Deserts: Debating Free Will—in which he and Dennett “debate our respective views on free will, moral responsibility, and punishment.” I’m looking forward to that one! He’s got yet another one coming out about the implications of “no free will” for criminal justice: Rejecting Retributivism: Free Will, Punishment, and Criminal Justice. 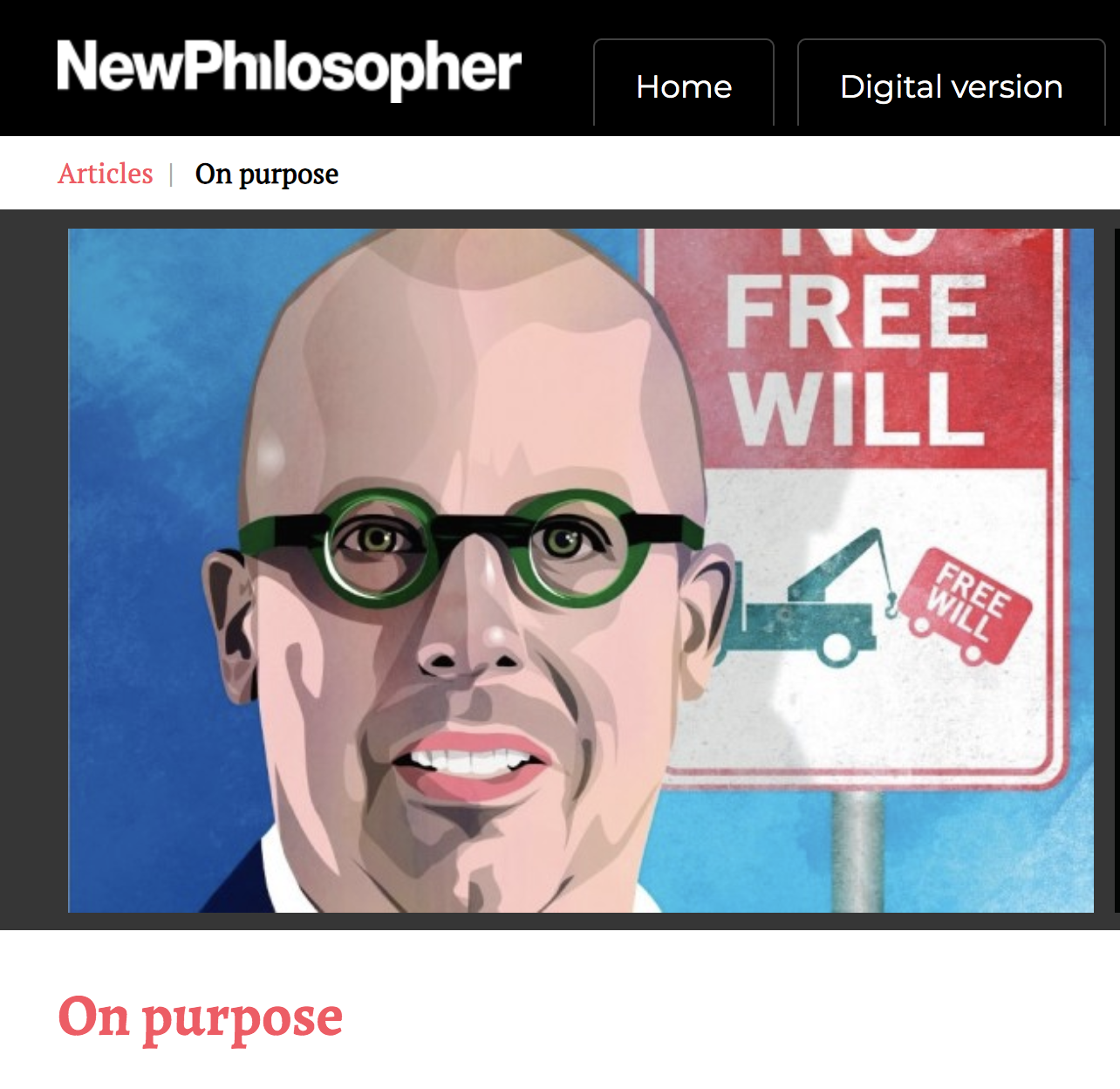 Definition of free will: Caruso has a unique way of defining free will, as he says many philosophers “define free will in such a way that it directly follows that we either have it or we don’t.” Instead, he limns the concept by whether or not it gives us moral responsibility, which is, to most people, the essential concomitant of free will. And so he comes up with this:

I’ve long argued that the variety of free will that is of central philosophical and practical importance is the sort required for moral responsibility in a particular but pervasive sense. This sense of moral responsibility is typically set apart by the notion of basic desert and is defined in terms of the control in action needed for an agent to be truly deserving of blame and praise, punishment and reward. Understood this way, free will is a kind of power or ability an agent must possess in order to justify certain kinds of basically deserved judgments, attitudes, or treatments – such as resentment, indignation, moral anger, and retributive punishment – in response to decisions or actions that the agent performed or failed to perform. These reactions would be justified on purely backward-looking grounds, that is what makes them basic, and would not appeal to consequentialist or forward-looking considerations, such as future protection, future reconciliation, or future moral formation.

I contend that there are several distinct advantages to defining free will in this way. First, it provides a neutral definition that virtually all parties can agree to. Unlike some other definitions, it does not beg the question or exclude from the outset various conceptions of free will that are available for disputing parties to adopt. Second, by defining free will in terms of basic desert moral responsibility, this definition captures the practical importance of the debate. Third, this definition fits with our everyday understanding of these conceptions. There is, for instance, growing evidence that ordinary people not only view free will and moral responsibility as intimately tied together, but that it is precisely the desire to blame, punish, and uphold moral responsibility that motivates belief in free will. Lastly, and perhaps most importantly, rejecting this understanding of free will makes it difficult to understand the nature of the substantive disputes that are driving the free will debate.

As an aside, Caruso claims that, in his book with Dennett, Dan reveals himself as someone who also rejects moral responsibility. Now since I once argued with Dan about that very point for three hours in a car, with Dan asserting that we do have moral responsibility, with me disputing it, I’ll be curious how Greg can discern this:

As to how my view compares to Dan Dennett’s, I’ll just add one final point. While Dennett’s compatibilism appears to be fundamentally at odds with my free will scepticism, when you actually drill down into what Dan means by free will, you’ll find that he too rejects what I’m calling basic desert moral responsibility. For that reason, I think he’s more of a free will sceptic than he admits – although he would resist that characterisation.

Crime and punishment.  Caruso is even more of a penal reformer than I. While we agree that punishment can and should be levied even without moral responsibility, I see the punishment as basically consequentialist, and useful for not only reforming bad guys and keeping them away from others until they’ve reformed, I also think punishment is necessary as a deterrent.(We both reject retributive punishment out of hand, as it’s based on punishing someone because he made the wrong choice.) Caruso, though he doesn’t discuss deterrence in this interview, rejects it because he thinks it has philosophical and moral problems.  However, I’m not sure what you do to deter people from, say, cheating on their income taxes or running red lights, and I’ll be curious to see how Gregg deals with this in his new book on retribution. You can’t just let people drive their cars without regulation and without the threat of some punishment!

At any rate, Caruso has what he calls a “public health” view of punishment, which seems quite progressive—though I still worry about the absence of a deterrent aim:

. . . . If we reject retributivism, either because we come to doubt or deny the existence of free will or for other reasons, we need an ethically defensible and practically workable alternative. In Rejecting Retributivism: Free Will, Punishment, and Criminal Justice, I develop and defend what I believe is the most promising, humane, and justified alternative: the public health-quarantine model. The core idea of the model is that the right to harm in self-defence and defence of others justifies incapacitating the criminally dangerous with the minimum harm required for adequate protection. Yet the model does not justify the sort of criminal punishment whose legitimacy is most dubious, such as death or confinement in the most common kinds of prisons in our society. In fact, the model is completely non-punitive and requires special attention to the wellbeing and dignity of criminals that would change much of current policy. Perhaps most importantly, the model also develops a public health approach that prioritises prevention and social justice and aims at identifying and taking action on the social determinants of health and criminal behaviour.

. . . Analogously, on this model the use of incapacitation should be limited to only those cases where offenders are a serious threat to public safety and no less restrictive measures were available. In fact, for certain minor crimes perhaps only some degree of monitoring could be defended. Secondly, the incapacitation account that results from this analogy demands a degree of concern for the rehabilitation and wellbeing of the criminal that would alter much of current practice. Just as fairness recommends that we seek to cure the diseased we quarantine, so fairness would counsel that we attempt to rehabilitate the criminals we detain. Rehabilitation and reintegration would therefore replace punishment as the focus of the criminal justice system. Lastly, if a criminal cannot be rehabilitated and our safety requires his indefinite confinement, this account provides no justification for making his life more miserable than would be required to guard against the danger he poses.

This model would have the effect of eliminating the grossly inhumane types of punishment imposed by countries like the U.S. and India, replacing it with one along the lines of Norway, which has a much lower rate of incarceration as well as a much lower rate of recidivism than the U.S. (see my earlier post on this). The other day I watched this video about the country’s most secure prison, the ADX Supermax prison in Florence, Colorado where, as the show below notes, “America sends the prisoners it wants to punish the most”. I was absolutely horrified at the treatment of the prisoners, who are in solitary confinement for 23 hours a day and have one hour of solitary exercise. Note that the “punishment” goes to prisoners who may not be especially dangerous to guards or other prisoners, but they are being punished retributively.

And here’s a Supermax cell. Note the barred door behind the main door. It’s 7 feet wide and 12 feet long. 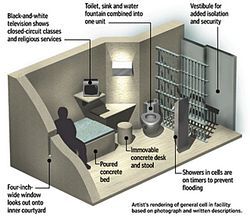 There’s a lot more, but I’ll add just that Caruso lards his discussion with a lot of social justice talk, but not of the woke kind: he says that hand-in-hand with punishment reform must go an attempt to prevent crime by eliminating “racism, sexism, poverty, and systematic disadvantage as serious threats to public safety.” This of course is useful and necessary, but it won’t of course eliminate crime completely.

I strongly agree with Caruso that penal reform is a huge priority for the U.S., and that taking the no-free-will “public health” approach—which basically sees criminals as individuals with an infectious disease that needs to be cured humanely—is essential in spurring such reform. But I’ve said that many times before.

The meaning of life and the good life. Caruso goes on to speak about the meaning of life, and what he considers a good life (he has a fascinating digression on one of his hobbies that gives his life meaning), and once again we agree on this:

[Caruso]: The search for the meaning of life is a fool’s errand. There is no singular, universal, all-encompassing meaning to it all. There is, however, meaning in life. We create meaning through our roles as players in the game of life.

If you have a spare hour or so, have a read. Even if you reject Caruso’s hard determinism, there’s a lot to think about in the interview.

86 thoughts on “Gregg Caruso on free will, the justice system, prisons, the meaning of life, and the good life”