On top of that, when criminals in Norway leave prison, they stay out. It has one of the lowest recidivism rates in the world at 20%. The US has one of the highest: 76.6% of prisoners are re-arrested within five years.

Why the difference? Well, of course, the countries harbor different populations—the U.S.’s is more diverse and has greater income inequality, which may breed crime. The U.S. also has much looser gun laws, though groups like the National Rifle Association claim that gun ownership doesn’t breed violence (I disagree).

Business Insider, however, floats the theory that at least one reason for the difference is Norway’s more humane prison and punishment system. Those systems aren’t based on the notion that solving the crime problem requires stringent punishment in horrible jails and long sentences, but instead on rehabilitation of the prisoner. (That, of course, will also weaken another motivation for punishment: sequestration from society, for if prisoners can be rehabilitated more readily, there’s less reason to keep them locked up. But it may strengthen another motivation for punishment—deterrence.)

Based on [the statistics given above], it’s safe to assume Norway’s criminal justice system is doing something right. Few citizens there go to prison, and those who do usually go only once. So how does Norway accomplish this feat? The country relies on a concept called “restorative justice,” which aims to repair the harm caused by crime rather than punish people. This system focuses on rehabilitating prisoners.

Take a look at Halden Prison, and you’ll see what we mean. [JAC: Take a virtual tour of the prison here.] The 75-acre facility maintains as much “normalcy” as possible. That means no bars on the windows, kitchens fully equipped with sharp objects, and friendships between guards and inmates. For Norway, removing people’s freedom is enough of a punishment.

Like many prisons, Halden seeks to prepare inmates for life on the outside with vocational programs: woodworking, assembly workshops, and even a recording studio.

Halden isn’t an anomaly either. Bastoy prison is also quite nice.

Here are two pictures of Halden prison, showing a “cell” and a common room. Such facilities are unimaginable in the U.S. except, perhaps, in the most comfortable federal prisons for white-collar criminals: 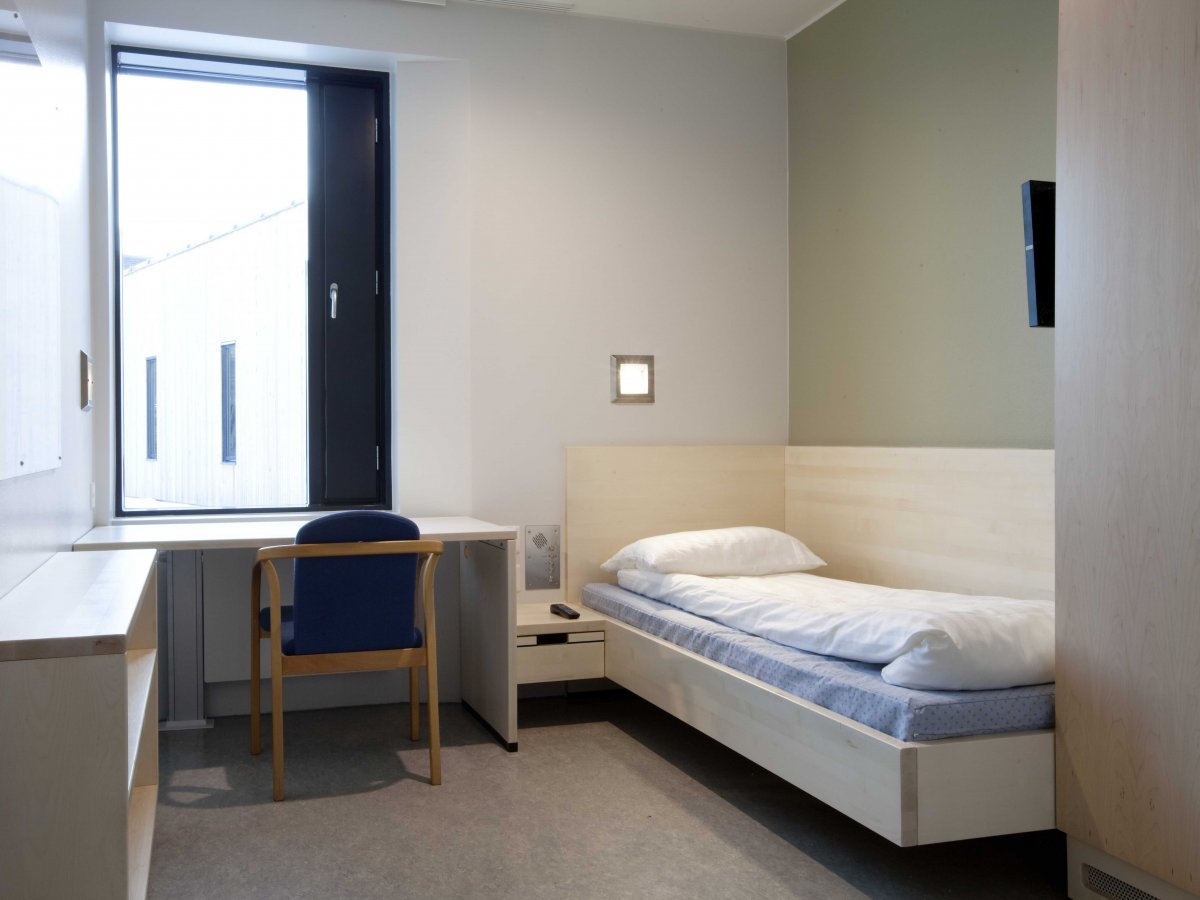 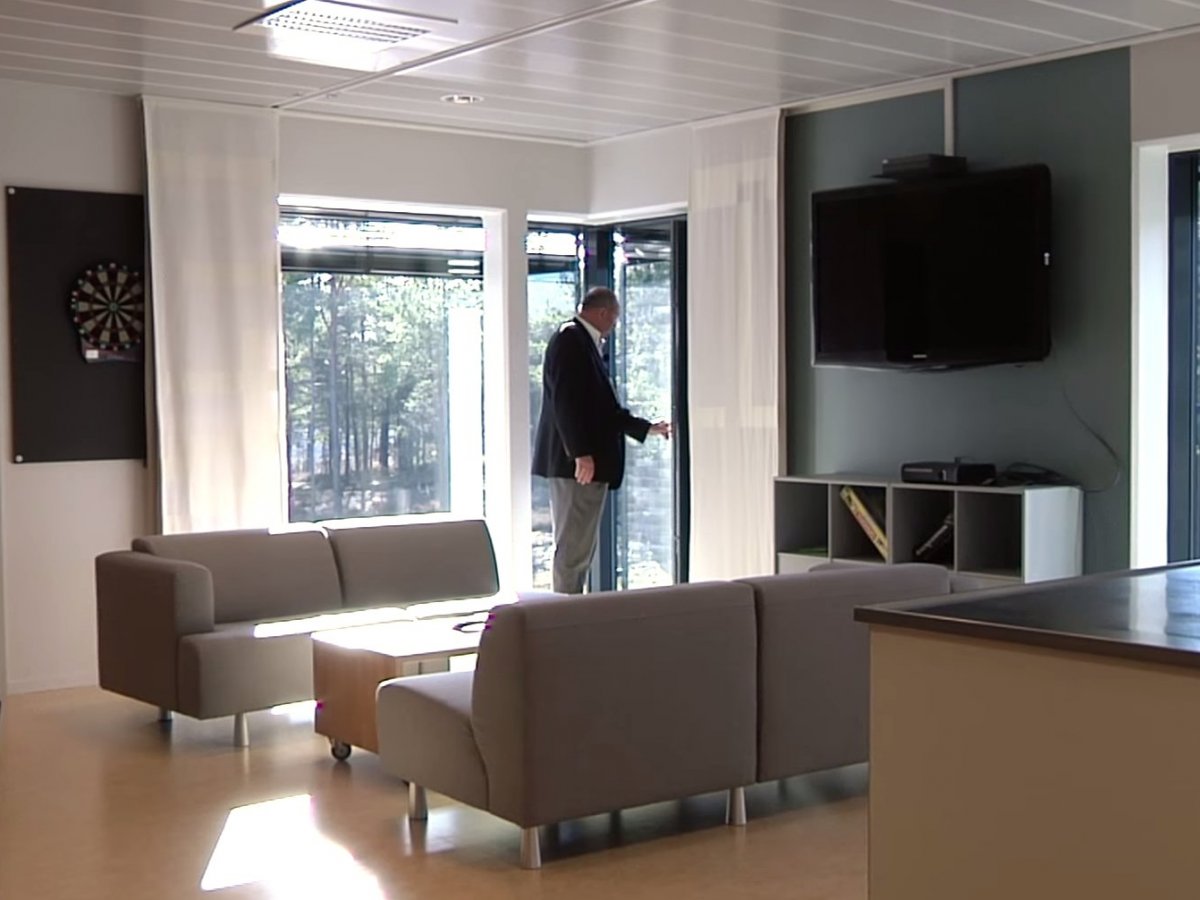 Clearly, the philosophy of punishment differs between the two countries:

All of these characteristics are starkly different from America’s system. When a retired warden from New York visited Halden, he could barely believe the accommodations. “This is prison utopia,” he said in a documentary about his trip. “I don’t think you can go any more liberal — other than giving the inmates the keys.”

In general, prison should have five goals, as described by criminologist Bob Cameron: retribution, incapacitation, deterrence, restoration, and rehabilitation. In his words though, “Americans want their prisoners punished first and rehabilitated second.”

Indeed, and “punishment” in the U.S. often involves retributive punishment based on the notion that the criminal simply made the wrong choice.  Retribution, in turn, rests on some notion that criminals have free will. We know that this philosophy is strong in the U.S. system, for when criminals are thought to have offended in circumstances when they couldn’t choose right from wrong (mental disability, for instance) or weren’t able to choose right from wrong (a brain tumor that makes one aggressive), they get lighter sentences, often involving more rehabilitation and hospitalization.

But to a determinist like me, no criminal has a choice about what to do, so all should be treated as victims of their circumstances. This would eliminate retributive punishment, and perhaps make our system more like Norway’s. Business Insider also notes the lighter sentences in Norway, sentences that still allow unrehabilitated offender a long stretch in prison:

The maximum life sentence in Norway shows just how serious the country is about its unique approach. With few exceptions (for genocide and war crimes mostly), judges can only sentence criminals to a maximum of 21 years. At the end of the initial term, however, five-year increments can be added onto to the prisoner’s sentence every five years, indefinitely, if the system determines he or she isn’t rehabilitated.That’s why Norwegian extremist Anders Behring Breivik, who killed 77 people in a bombing and mass shooting, was only sentenced to 21 years. Most of the outrage and incredulity over that sentence, however, came from the US.

Overall, Norwegians, even some parents who lost children in the attack, seemed satisfied with the sentence, The New York Times reported. Still, Breivik’s sentence, as is, put him behind bars for less than 100 days for every life he took, as The Atlantic noted. On the other hand, if the system doesn’t determine Breivik “rehabilitated,” he could stay in prison forever.

I emphasize again the difference between the U.S. and Norway involves not only their philosophy of incarceration, but also social arrangements, population diversity, and income inequality. But we also have a brutal prison system that breeds recidivism. As most people know, being put among hardened criminals in a soul-sapping prison simply makes people more likely to commit crimes after release, while rehabilitation, aimed at getting inmates jobs and adjusting their attitudes, will reduce both recidivism and the crime rate.

This, I think, is one way that fully grasping behavioral determinism can improve society. Retribution is based on the notion of dualistic free will, and though there are other reasons for punishment, eliminating that could produce a sea change in our attitude toward criminals. When we finally accept the truth (no thanks to wheel-spinning free-will compatibilists!): that no criminal had a choice in what he did, we’ll begin to really tackle how to deal with offenders in a way that that produces the most “well being.” I suspect that this would involve creating, in the U.S., a prison system substantially closer to Norway’s.

It’s time for philosophers—at least those who care whether their work actually makes a difference in society—to stop yammering about ways that free will is compatible with determinism, which accomplishes NOTHING, and instead start emphasizing the social consequences of determinism. We have nothing to lose but our chains.

237 thoughts on “Why is Norway’s prison system so successful?”