The action continued into Sunday with yoga, breakfast and organizing workshops. Students will remain there “indefinitely until we hear publicly” from Lee, CareNotCops organizers said in a tweet.

In a statement Monday, organizers said they would remain on the block until Lee agrees to meet their demands.

For some time now, I’ve been anxious about my University becoming more and more woke. That’s clearly happening to the student population, and there are signs it’s affecting some of the administration as well. This would break my heart, but I think the tide is unstoppable. I only hope that the highest administrators—the President and the Provost—will hold the line.

The latest instantiation of student wokeness, as reported by the Chicago Tribune (click on screenshot below) is a set of two demonstrations last Saturday for defunding and abolishing the campus police, a large and well trained set of men and women who help keep us safe on the South Side. I’ve met quite a few of them, and have found them professional and efficient. But then again, I’m not a person of color, for a lot of the protestors claim that the police are racist.  As far as I know, while there may have been an occasional case of “profiling”, I haven’t seen evidence to buttress that strong claim. The case that’s always cited (see below) holds no water.

And of course it would be madness to abolish, much less disarm, the U of C campus cops. We are firmly ensconced in the South Side, not a particularly safe area, and there are lots of shootings there. If the campus cops were to go, I doubt that many parents would want to send their kids here, and the University knows that.

Nevertheless, the students demonstrated Saturday in front of the Provost’s house (Ka Yee Lee, a female chemist  ofAsian descent), as well as of President Bob Zimmer’s house at the University, blocking traffic in both places. I was a bit upset at the demonstration at Zimmer’s, as he’s not been well: he had a brain tumor removed and is stepping down as President at the end of the upcoming academic year.

But here’s the Tribune report: 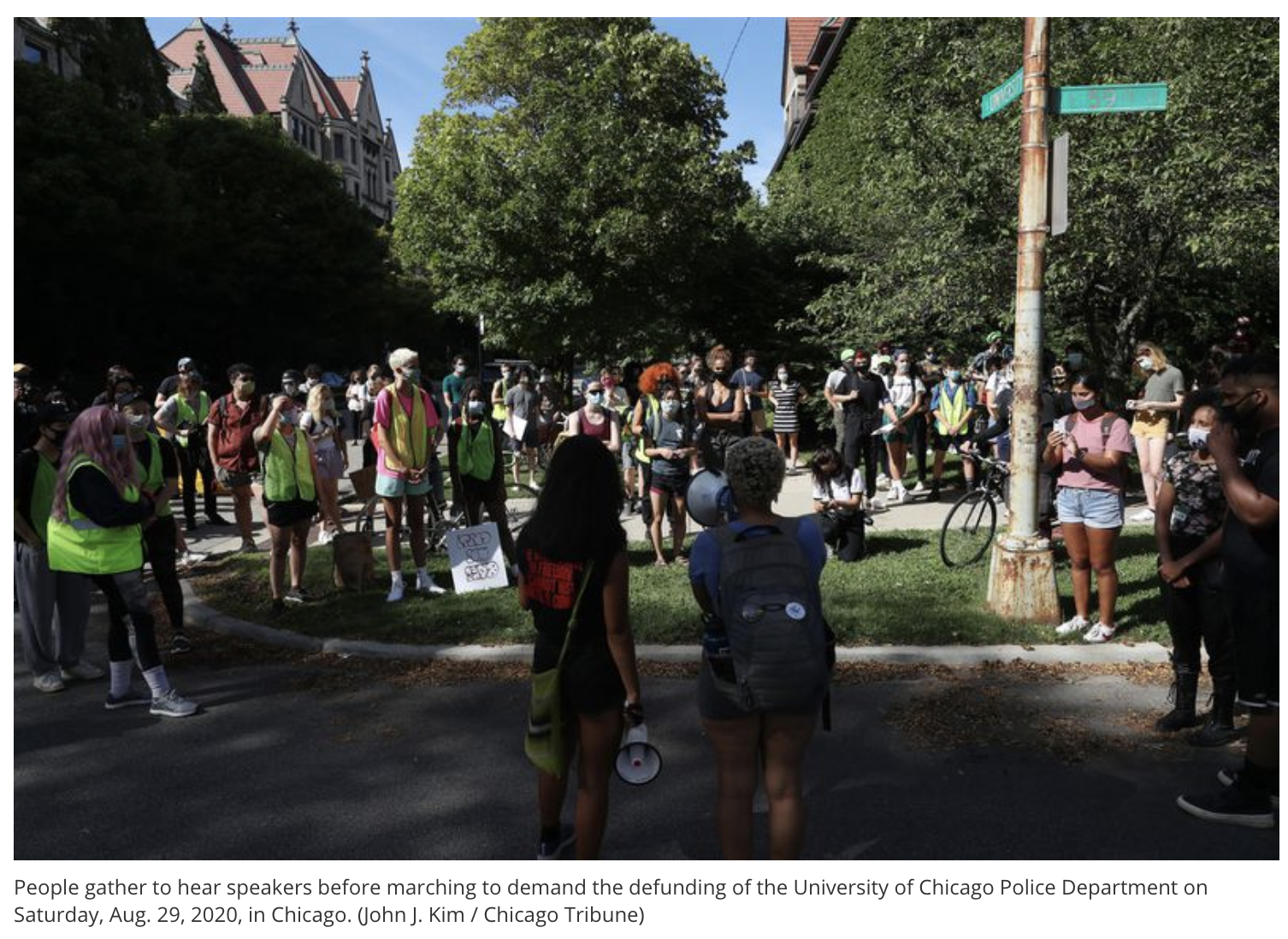 Here are the students’ demands and indictments from the Trib piece:

Those rallying demanded school leaders disclose the university’s police budget — and then cut it in half. The student group additionally wants the university to disband its police force by 2022 and to redistribute the remaining funding to support students of color and ethnic studies.

. . . Members of student groups UChicago United and Care Not Cops as well as the activist organizations Black Lives Matter Chicago and Good Kids Mad City were at the protest.

“I’m angry because the University of Chicago, you know, the one that loves buzzwords like diversity and inclusion, that puts Black kids on their postcards, is the same university that owns and operates one of the largest private police forces in the country,” Wright said.

The crowd shouted back, “That ain’t right.”

The students always cite this incident with Charles Thomas as the reason cops should be disarmed/defunded:

Speakers pointed to the 2018 shooting of fourth-year student Charles Thomas as an example of school police failing to protect the community. Thomas was in the midst of a mental health crisis in the 5300 block of South Kimbark Avenue when a university officer fired a shot and wounded his shoulder as Thomas advanced with a stake in his hand, officials have said.

Thomas, a fourth-year student with mental problems, may have had a psychotic break: he went berserk and began smashing car windows with an iron bar (not a wooden “stake”). When the cops confronted him (you can see the video at my post on the incident), he brandished the bar and started running at the cops, whereupon they shot him in the shoulder, which I think was a deliberate disabling but not life-threatening shot. From the student newspaper:

Bodycam and dashboard footage released by the University shows officers confronting Thomas.  As he walks toward them, an officer can be heard shouting, “Put down the weapon!” while Thomas shouts “What the fuck do you want?” and “Fuck you.” About a minute after the officers arrived on the scene, Thomas begins running rapidly toward the individual wearing the body camera, who commanded Thomas again to drop the weapon, and then fired a single shot into his shoulder.”

The cops had every right to disable Thomas, who would have bashed their brains in. Yet this is taken as an example of police “failing to protect the community” and of the University “not addressing mental health adequately”—as if one could prevent all students from having breakdowns. In fact, since the incident Thomas has had other episodes and is now in Cook County jail awaiting trial on felony charges. One can debate whether or not he belongs in jail, but that’s the call of the City of Chicago Police, not the University. What is the case is that without armed cops, Thomas might well have killed a policeman or two. Yet even now the students think the cops didn’t handle the situation appropriately. I disagree.

After Ka Lee (or someone) left the picketed house she lives in but drove off without talking to the protestors, they maturely made her a parking spot in both English and Chinese, labeling her a racist. This is shameful. I’ve never seen a scintilla of evidence that either Zimmer or Lee are racists (to me they seem quite antiracist), and the bandying about of “racist” in a situation like this is absolutely unconscionable. In fact, one could consider the Chinese writing racist since Lee speaks perfect English, and I have no idea if she speaks any dialects of Chinese.

Someone emerged from Provost Lee’s house, refused to talk to us, and got into a car parked outside her house and drove away. We decided we wanted to be a nice neighbor and leave a little present for when they return ☺️ #DefundUCPD #EthnicStudiesNow #CulturalCentersNow pic.twitter.com/PIk6PPeqTs

But the good news: the University, which knows what would happen if the campus police force were to be cut in half or disappear, simply said “nope” to the demonstrators:

When asked for comment, a university spokesman referred to an Aug. 12 message from President Robert Zimmer and Provost Ka Yee Lee, who said they believe it’s necessary to examine public safety and how policing can be improved.

The message also said, “The University of Chicago Police Department (UCPD) provides a vital service in helping to keep safe and support our campus and surrounding communities — a mission that the University has undertaken with the encouragement of community leaders and in accordance with Chicago City Ordinance. That role will continue.”

And so the students can keep griping, but it’s futile, as nobody running this University who’s in their right mind would bow to the protestors’ demands.

31 thoughts on “U of C students demonstrate to defund and disarm campus police; University says “no way””