I really did try to read this Science paper about urban ecology and systemic racism, first reading it quickly, as I’m wont to do, and then starting to delve in, “perusing” it in the proper sense. But I had to give up on several grounds:its  length (18 pages, one of the longest papers I’ve ever seen in Science), terrible academic writing in a postmodern style (dry as dust), an absence of original data, and, apparently, an explicitly political agenda that comes out in the end.

Given that I didn’t read the entire paper carefully, I can’t really assess its value, but I provide a link to the free paper below (pdf here, link at the bottom).  If you’d like to see it, I’ll send a pdf, but perhaps at least one reader can plow through it and put its message into plain English. To me the message seems to be: “Structural racism in America has affected minority communities in a way different from white communities with respect to their ecology (heat distribution, tree cover, etc.), and we need to take this into account this when doing urban ecology. And this also means that ecologists need to become anti-racism activists.” 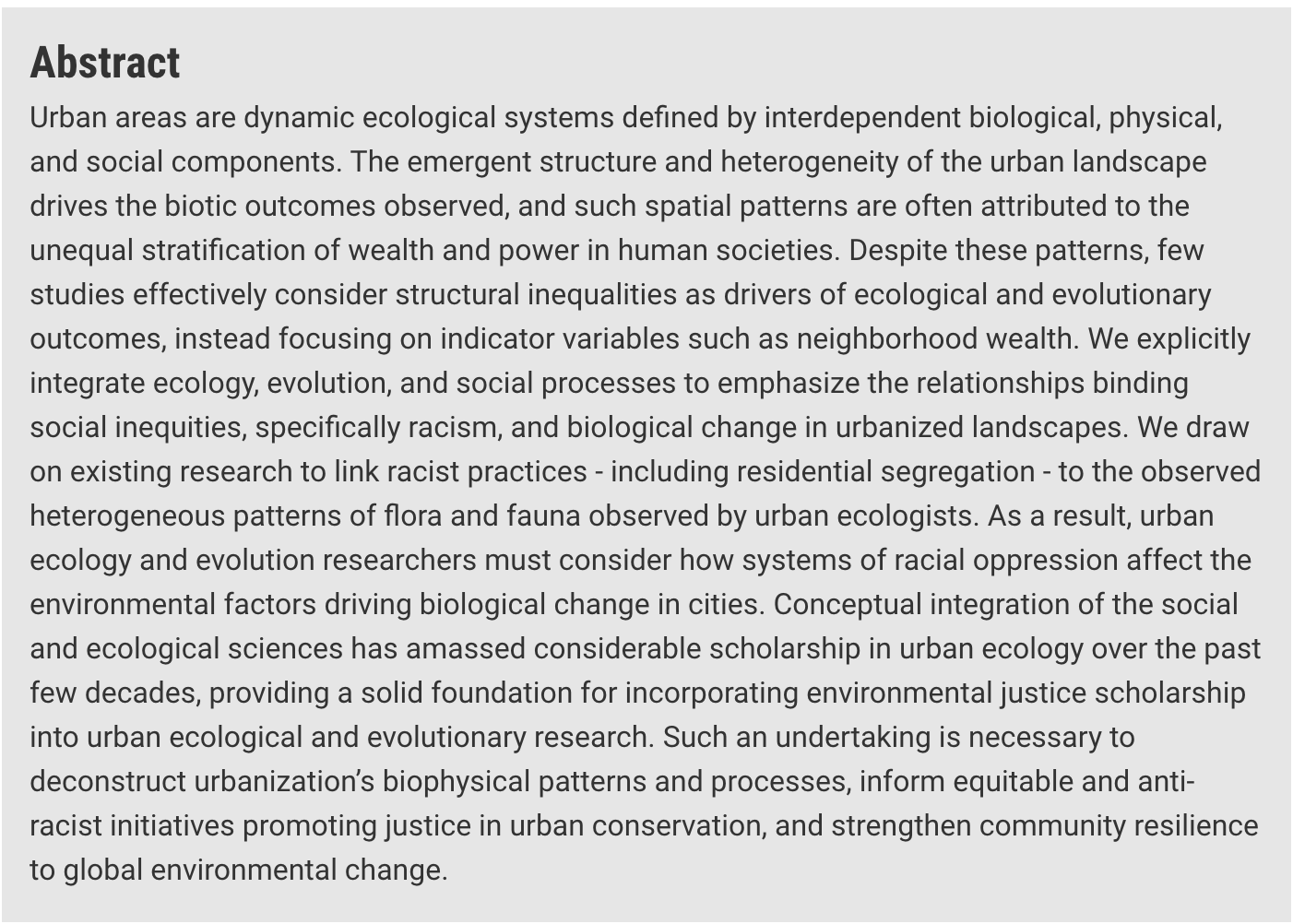 Here are two bits that put me off. The first is about intersectionality, which I don’t see as relevant to their question (bolding in text is mine).

Understanding the mechanisms shaping urban inequality and thus urban eco-evolutionary patterns and processes requires incorporating intersectional theories of inequality and evaluating accessibility to different spaces (34, 138, 139). The term “intersectionality” emphasizes that various marginalized identities of an individual or community more broadly intersect, compound, and interact, which ultimately impact the magnitude and severity of experienced social inequities (Fig. 1) (57). For example, discrimination for a queer Black woman in the United States may be intensified relative to individuals with similar racial, gender, and sexual orientation identities alone. Translating the concept of intersectionality onto the urban landscape can provide a more holistic understanding of the patterns and processes shaping urban ecosystems. For instance, we may hypothesize that characteristic differences between Indigenous ecological practices and forestland managers may contribute to variance in native species richness and community complexity. (140, 141). Similarly, we may predict that gender differences in land cultivation and homeownership shape plant species assemblages and species turnover rates. Further, vegetation removal and increased nighttime lighting to deter LGBTQIA+ communities (95) may have subsequent effects on disturbance regimes and local biodiversity that reduce habitat value for multiple species. Though such empirical links are currently speculative and not well established, integration of various inequities in cities may provide additional resolution to understanding how social drivers impact urban ecology and evolution. While our focus has been on racism and classism, we recognize the need for and encourage intersectional approaches in urban ecology.

It’s not clear to me that intersectionality as defined in the article has anything to do with the three hypothetical analyses they propose.

The bit below seems to me one of the real auns of the paper—to call for political change. That’s very different from doing the science, i.e., trying to understand how racial oppression, poverty, and class have affected patterns in urban ecology. One can say, for instance, that there are real effects, but ecologists might respond that there are other problems on their minds, like global warming and extinction of species outside of urban environment, that are also important, and reject the argument about what their activist priorities should be.

As urban ecologists and evolutionary biologists, we have a responsibility to implement anti-racist strategies that interrogate systems of oppression in how we perform our science. This necessarily means eradicating efforts that perpetuate inequities to knowledge access, neglect local community participation, or exploit community labor in the pursuit of academic knowledge (i.e., the practices of colonial and parachute science). Concurrently, increasing representation of individuals of diverse identities is inherently just and enhances our scholarship (166, 167). By directly including a diversity of scholars and incorporating an understanding of systemic racism and inequality, we can more holistically study urban ecosystems. We will not be able to successfully assess how racism and classism shape urban ecosystems – nor address their consequences – without a truly diverse and inclusive scientific community.

Again, I haven’t read the whole paper carefully, though I have read it quickly. I’d welcome anybody biting the bullet here.

42 thoughts on “Does anybody want to read a long paper?”