When I give talks about why Americans reject evolution so frequently, I refer to Steve Stewart-Williams’s excellent book from 2010: Darwin, God, and the Meaning of Life: How Evolutionary Theory Undermines Everything you Though You Knew.  It goes through reason after reason why evolution not only undermines our ideas, but why that undermining makes people resistant to evolutionary biology and its conclusions. It explained to me, for instance, why 27% of American Catholics are creationists, embracing Biblical literalism despite the fact that the Church itself explicitly accepts evolution. Those people, like many, just can’t get past the naturalistic and non-human-centric implications of evolution. The book is like a bucket of cold water tossed on the idea that evolution doesn’t conflict with religion.

Steve has a newer book, published in 2018 (click on screenshot below to go to Amazon site). I haven’t yet read it, though it’s coming to me through my library, but it’s apparently a discussion of the evolution of culture (“evolution” that’s both genetic and cultural), as well as a discussion of the merits of and problems with evolutionary psychology. 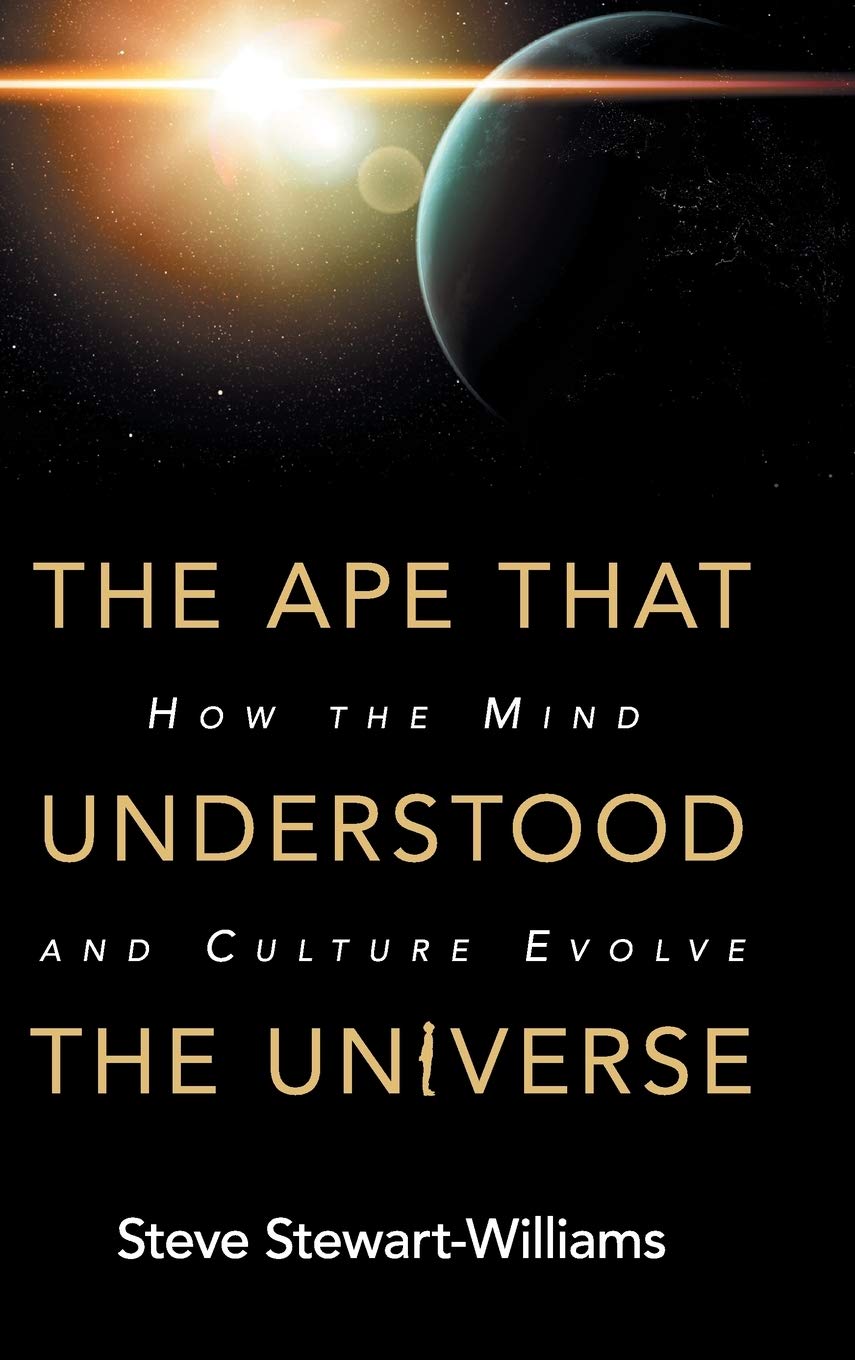 Stewart-Williams is an associate professor of psychology at the University of Nottingham Malaysia Campus, and I’ve written about some of his work here, describing why he thinks that the difference between human males and females in levels of aggression has a substantial evolutionary basis.  But, as the interview below shows, in which he speaks with Pablo Malo at the site La Nueva Ilustración Evolucionista (“The New Evolutionary Enlightenment”), Stewart-Williams doesn’t accept whole hog all the claims of evolutionary psychology, and is sometimes quite critical of them. In other words, Stewart-Williams’s attitude towards the discipline is similar to mine. Read the interview by clicking on the screenshot below. There’s an English translation so you don’t have to use Google translate except for the introduction (or if you speak Spanish):

Stewart-Williams’s take on evolutionary psychology also differs from that of biologists on the “progressive” left who reject evolutionary psychology as a whole, dismissing it as a farrago of “just-so stories” and untested (and untestable) hypotheses. You can see this attitude, for instance, in people like blogger P. Z. Myers, who should know better, and his minions. Yes, the discipline has its “soft underbelly,” as I’ve described, but it’s also led to informative insights, and simply cannot be swept away with unwarranted ridicule. Dismissal of evolutionary psychology as a whole (see another dismisser below) comes not from a scientific attitude, but an ideological one: if human behavior evolved over millions of years, just like human bodies and physiology (one can’t deny the latter), then perhaps we are partly slaves to biological determinism, and, worse, behavioral differences between men and women might be in part the result of evolution.

I think the evidence for evolved differences is pretty solid, but blank-slaters, who happen to populate the progressive Left, deny this determinism because they mistakenly think that evolved differences somehow imply moral differences. As Steve Pinker showed in his book The Blank Slate, and I’ve said many times, the idea that evolution tells us what is right and wrong is a fallacy—the “naturalistic fallacy”.

But I digress. I’ll just say once more that the blatant dismissal of evolutionary psychology as a discipline is not only unwarranted, but ignorant and ideologically based. To think that human bodies are the product of evolution but human minds are not can only be the product of some overweening and blinkered ideology.

On to the interview. It’s in both Spanish and English.. I’ll highlight the main points in bold, and any quotes from Steve will be indented:

Some of evolutionary psychology is weak and “silly”, and can comprise “just-so stories”.

But a lot of it is sound, though not “proven”—but of course no science is “proven”. We just accrue more or less confidence in hypotheses as we do more tests. So the declarations of people like philosopher Subrena Smith, who declared that doing evolutionary psychology was “impossible”, are badly mistaken. (I discussed Smith’s paper here, and Steve Pinker’s ideas about it here.)
Steve:

Evolutionary psychology certainly isn’t perfect, but I have to say I wasn’t particularly impressed with [Smith’s] critique. The idea that that EP is impossible – not just difficult, but impossible – strikes me as so extreme that I’m a little surprised so many people took it so seriously. It also strikes me as awfully convenient that, of all the sciences, the one we can rule out a priori, on purely logical grounds, just happens to be one that many people dislike and object to for explicitly political reasons.

Smith’s argument is basically a sophisticated reboot of the old retort that “behaviour doesn’t fossilize.” She claims that there’s ultimately no way to show that the psychological tendencies underpinning people’s behaviour today evolved in prehistoric times to perform the same functions that they currently perform, and thus that evolutionary psychology is impossible in principle.

Is she right? Well, one reason to doubt that evolutionary psychology is impossible is that… people are already doing evolutionary psychology: They’re gathering evidence bearing on evolutionarily informed hypotheses, and this evidence nudges up or down our confidence that these hypotheses are accurate. Sure, no one has provided evidence that proves any hypothesis in evolutionary psychology with the certainty of a mathematical proof. But that’s true of every claim in science. Scientists can only ever nudge our confidence up or down. Perhaps this is harder in EP than in some fields (although the replication crisis in psychology and elsewhere suggests that it’s not as easy as we thought in any field). But saying that it’s harder is very different than saying that it’s impossible.

And in some cases, it isn’t even particularly hard. Consider hunger. Strictly speaking, we can never say with 100% certainty that this psychological capacity evolved in our prehistoric ancestors, or that it had the same function back then as it does today (i.e., motivating us to seek and consume food). But it seems reasonable to think that it did. Indeed, it seems unreasonable to think otherwise – unreasonable, in other words, to think that our ancestors did not experience hunger or that the primary function of hunger back then was unrelated to eating. And if you accept that, I think you also have to accept that there’s no in-principle reason to reject any and all evolutionary psychological hypotheses, even if others are more difficult to evaluate. For a more detailed response to Smith’s paper, see Ed Hagen’s excellent post on the topic.

Few evolutionary psychologists now accept two views they’re often accused of: “Massive modularity” (the brain comprises various semi-independent modules that code for different behaviors), and the “Environment of evolutionary adaptedness”: the idea that our behaviors all show adaptations to the life of our ancestors on the African savannas. The latter, at least, would be foolish given the evidence that humans have undergone palpable evolutionary change in the last 10,000 years. Stewart-Williams prefers that evolutionary psychologists just analyze human behaviors using well-established evolutionary principles like kin selection, parental investment, reciprocal altruism, and the like.

Refutations of the “Cinderella Effect”: the demonstration that parents are more brutal toward their stepchildren than their biological children, are weak. (These were mostly raised by Hans Temrin.) According to Stewart-Williams, the data come down pretty much in support of the Cinderalla Effect. If further studies buttress those data, it would be good evidence for an evolutionary-psychology explanation based on relatedness and parental investment. It makes sense that you’d treat your biological children better than those unrelated to you, and you might even abuse the latter if it favors the prospects of the former. (Remember, lions that invade a pride immediately kill all the cubs from the mothers, and then inseminate the mothers, yielding cubs that are related rather than “step-cubs”.)

The idea of memes hasn’t been that productive in understanding human cultural evolution, but there are a few suggestive examples of memes evolving simply because they have self-propagating characteristics. One of these examples involves witch hunts, and was published last year by Hofhuis and Boudry. I haven’t read it yet, but I’ve been a pretty severe critic of “memetics.”

The Himba people of Namibia have a 48% rate of non-paternity; that is, half the children in a family aren’t fathered by the “father.” Isn’t that a refutation of evolutionary theory? Stewart-Williams explains why we’d sometimes expect these anomalies.

Disparities in representation of males vs. females in different areas don’t always demonstrate sexism and bigotry, as many assume. They could just be differences in preference, and perhaps some of these are the result of evolved behaviors. I’ve made this point many times before, but it still goes over the head of many “progressives”, who fail to realize that there is, for many cases of unequal representation, a competing hypothesis to the idea of “structural discrimination.”

Here’s what Steve says about that in response to a question:

What are you working on now? What mystery would you like to unravel next?

I’m working on two main projects at the moment. One is a theoretical paper with Lewis Halsey, looking at the causes of gender disparities in STEM. As everyone knows, men outnumber women in certain areas of STEM, including mathematics, computer science, and physics. As everyone also knows, the most common explanations for the gender gaps are discrimination and socialization. We argue, in contrast, that although discrimination and socialization are part of the story, they’re not the whole story. We make two main claims in our paper. The first is that factors other than discrimination contribute to gender gaps in STEM; these include, in particular, average sex differences in interests and life priorities. The second is that these average differences aren’t due entirely to socialization. Socialization plays an important role, but the differences are also partly inherited.

People sometimes assume that if you admit a role for biological factors in shaping STEM gender gaps, you must think nothing should be done about those gaps. But that’s not our view. We are wary of overly coercive fixes, such as offering people monetary or other incentives to make career choices they wouldn’t otherwise make, and affirmative-action policies that, in effect, discriminate against men and lead people (including the benefactors of such policies) to secretly wonder whether they really earned their success. But that doesn’t mean we should do nothing. We should let young people know about all the science careers on offer, and make clear that these are options that women as well as men should consider. We should make sure we highlight the scientific achievements of both sexes, rather than focusing unduly on men. We should encourage people to accept and support women (and men) who make gender-atypical choices. We should put policies in place that reduce the possibility of bias against either sex, including gender-blind evaluation of job applications, research grants, and the like. And we should do what we can to make science careers compatible with the demands of motherhood (and fatherhood).

Having done all that, though, we should respect the choices that people make about their own lives and careers, even if this doesn’t result in perfect gender parity. In other words, we should aim for equality of opportunity, rather than equality of outcome. People are ultimately going to be happier if they pursue the careers that most interest them.

There’s a lot more to the interview than this, so if you want a level-headed take on evolutionary psychology, I’d recommend that you have a look at the interview, and perhaps read Steve’s latest book.