About four years ago I wrote abut Louis Wain (1860-1939), a British artist who specialized in drawing and painting cats. As he got older, Wain developed a severe mental disorder (perhaps schizophrenia, though psychiatrists argue about his condition), and the cats he drew got weirder and weirder. You can see specimens of his art in my earlier post.

There are more specimens in this blog post from the British National Archives about Wain (they hold many of his images), a post that updates the information and adds other stuff I didn’t know. It’s not long, and I’d recommend your having a look. (Click on the screenshot.)

Because the temporal order of his illustrations isn’t clear, there’s some argument about whether Wain’s “psychedelic” cat art represents mental illness or simply an experimentation in style. It is clear that he was mentally ill, as he spent much of the last part of his life in mental hospitals. But even the psychedelic cat art is lovely.  Here are a few pictures and then the site’s summary of Wain’s significance. The captions are from the site, and I’ve put the drawings in chronological order.

Here’s a panoply of his drawings from Wikipedia; the caption is ” Various art styles used by Louis Wain over the course of his life within mental institutions. It is completely unknown what chronological order they may have been done in. Indeed, some may have been in progress while others were started and completed.”

Of course the use of Wain’s art by psychiatrists to demonstrate the effect of mental illness on perception depends a lot on the temporal order of the works, and, sadly, we don’t seem to have that information. I suspect that mental illness did play a role in this: some of these paintings are so divergent from Wain’s early work that it’s hard to believe that he didn’t have a (non-artistic) change in perception. A few of these aren’t even recognizable as cats, and show the geometric features often seen in art by the troubled.

Here’s the Archive’s summary of Wain’s life and accomplishments:

The story of Louis Wain’s life is a fascinating one full of contradictions. He spent his life celebrating his love of the cat, promoting its welfare and sharing his creativity with the world. At the same time, his life was at times dark and difficult: he suffered with mental health problems and was exploited commercially leading to terrible poverty.

His experience raises interesting questions about art, ownership, mental health, poverty and charity in the 19th and 20th centuries. And we must always remember, especially today on International Cat Day, that our present-day infatuation with the cat is partly down to the wonderful work of Louis Wain.

It seems that there has been a blossoming of interest in the work of Louis Wain in recent years. There is currently a film in production starring Claire Foy and Benedict Cumberbatch. It tells the story of Louis Wain’s life and is due for release this year.

Wain and his kitty: 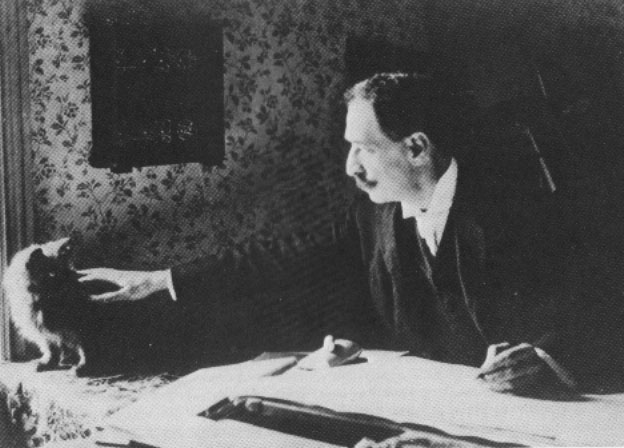 I know at least one reader who has a cat tattoo, but Bored Panda presents us with 40 of them in the article below (click on screenshot). I’ll show just a few of my favorites (sources are given in captions), but really, you must see them all, as choosing the first five was hard!

And here’s my vote for the worst cat tattoo, though it’s pretty funny (from Funny or Die): 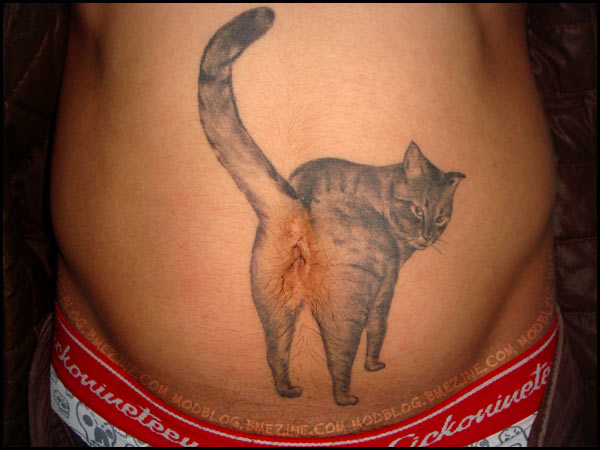 Finally, we have this story from People (click on screenshot), also reported in The Daily Beast, about a drug-smuggling cat:

According to People, the cat was found in a Sri Lankan prison with two grams of heroin, two SIM cards, and a memory chip, all in a plastic bag tied to its collar. The authorities detained the cat, hoping it would lead them to the real smuggler (cats don’t do drugs besides catnip), but the wily moggy escaped prison:

The drug-smuggling cat was likely trained by the same traffickers implicated in a recent case involving an eagle that was found transporting drugs in a suburb of Sri Lanka’s capital city, Colombo.

Police detained the cat after discovering the drugs, hoping it would lead them to the human drug smugglers but the animal got out of its holding room and escaped the prison through a fence when prison guards came to feed it, according to the Daily Beast. Police are not searching for the cat following its escape.

Twitter users hilariously reacted to the news of the cat’s escape, photoshopping felines onto various TV posters, including Prison Break and Narcos.

“Don’t feel safe anymore with dreaded criminals like these roaming around freely..” another user joked alongside a fake mug shot featuring a cat.