This is one of those attempts to purge language that I’m ambivalent about. As argued in the New York Times article below and the Chicago Sun-Times article below that, the real-estate term “master bedroom,” which refers to the largest bedroom in a house or apartment—one usually occupied by the parents in the family or the head of a household—is now seen as a racist term, a remnant of “master/slave” terminology of the antebellum U.S. As a result, it’s being eliminated from listings.

I’m ambivalent not on the grounds that it’s racist, for “sexist” would be a more accurate (though equally pejorative) adjective, so there are some grounds for a new term. But as to “walk up”, a term for a building without elevators that a New York real estate group characterizes as ableist, well, that’s over the top. And in all cases I can’t really see that a change in terminology would effect much good. In the end, I’ll put the question to readers below.

First, I wanted to see the origin of the term “master”. The Oxford English Dictionary (OED) says that it’s very old, coming from the Latin magister, which became “mestre” in French and “magister” in Old English. Its origin certainly had nothing to do with slavery, but referred, as we think of it today, to a boss or authority figure, although for centuries this was usually a man.  Note, though, that in its first paragraph the OED says “in the latter half of the 20th cent. its meaning has been extended to include women (either potentially or in fact) in many of the senses illustrated”: 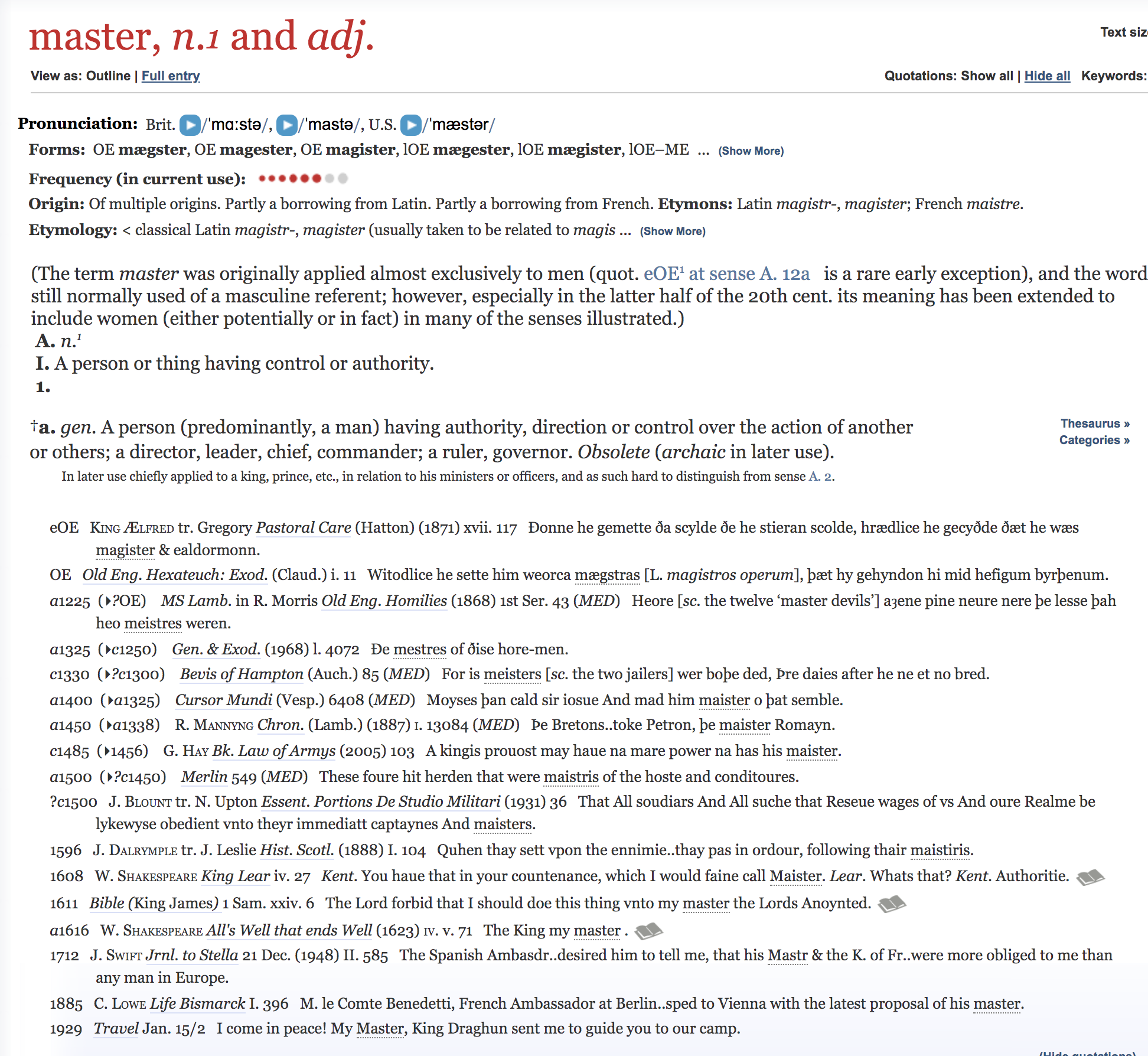 As for the meanings, here they are up to “slave” in the OUP, with most meanings again comporting with “boss” or authority figure”.  There’s a British usage, too, as in the film “Master and Commander.”

†a. gen. A person (predominantly, a man) having authority, direction or control over the action of another or others; a director, leader, chief, commander; a ruler, governor. Obsolete (archaic in later use).

b. In extended use, chiefly with an animal as subject.

d. The male head of a house or household.

A person who employs another; (formerly esp.) the employer of a servant or apprentice (cf. sense A. 14). Also: the owner of a slav

But of course the dictionary usage and word origin cuts little ice with those who want to remove the term. The rewriting started in Houston, as the NYT recounts:

The Real Estate Board of New York plans to vote soon on removing the phrase from its residential listings service, the online platform that organizes listings data from brokerages around the city. While most people searching for a new place to live don’t use the site directly, the update is influential since brokerages rely on the service.

Sandhya Espitia, chief operating officer of the real estate board, said its residential board of directors, which would make the decision, has been engaged in “deep conversation” over the last month while also researching similar changes in listing services around the country. They are “assessing what meaningful steps should be put in place to bring greater diversity and inclusion to the industry,” Ms. Espitia said.

The push to stop using the term “master bedroom” comes in the wake of George Floyd’s death and the resulting Black Lives Matter protests, and as the industry grapples with issues of housing discrimination and diversity within its ranks. The origins of the term are unclear, but some brokers nonetheless find it offensive and inappropriate.

The Houston Association of Realtors was the first industry group to decide to stop using “master bedroom” in late June, after some members expressed concerns that it could be perceived as racist or sexist. Instead, Houston’s multiple listing service now uses “primary” to describe the largest bedroom and bathroom in a listing. Unlike New York, where renters and buyers tend to use brokerage websites and Streeteasy.com to search for homes, the Houston group’s website is the main place where renters and home buyers go to view new listings.

The article does describe some pushback, including from singer John Legend, who’s black, who singles out a more serious problem:

Of course you can do both if you really object to “master bedroom.” (The phrase apparently traces back to a 1926 Sears catalog that refers to a build-your-own-home kit.)

But will all usages of the term “master,” including ones that have no connection to slavery like the above, be fair game? What about MasterCard? What about a “master” in martial arts or a “Grand Master” in chess? And so on. I do, however, take issue with the use of “master/slave” referring to a device or process that controls other devices or processes: here the referent is clear—and obnoxious.

But the next neologism goes over the line, for if you take it seriously, all usages of the term “walk” are subject to erasure, including “Walk” signs at streetcorners or “the moving walkway” in airports:

The New York Residential Agent Continuum also recommended that its members rethink the phrase, along with replacing other terms like “shared” for “His and Hers” bathrooms and “non-elevator” for “walk-up” building. Heather McDonough Domi, a broker with Compass and a co-founder of the group, said they are also pushing to address these issues in continuing education courses for brokers.

“His and hers” seems outmoded in view of gay couples, but “walk-up”, well, nope.

The Sun-Times piece by Mary Mitchell is much stronger, and I’ll quote just a bit:

“Master” is chiefly defined in the New Oxford American Dictionary as a “man who has people working for him, especially servants or slaves.”

What was once accepted as an innocuous term used to describe a person’s dominance is now being denounced as racist.

Frankly, I would pull out my “MasterCard” credit card without ever making the connection that “master” is as rooted in our slavery lexicon as “mammy.”

The fact that people in the real estate industry are debating this issue shows the depth at which Americans of all races are reexamining racial bias.

But I do agree with one of Mitchell’s ideas:

Maybe now African-American leaders, artists, musicians and influencers will launch a serious campaign to stop the use of the n-word.

The NAACP tried in vain to bury the word more than a decade ago.

But Black youth, particularly, have been bamboozled, as Malcolm X would say, into believing that a word rooted in the outright hatred of Black skin could ever be used to describe a Black person — no matter who uses it.

It pains me to hear that word blasting from car radios and from the lips of Black comedians, as if they don’t know where the word comes from.

I’ve long thought—and Grania, who was from South Africa, convinced me of this—that the best way to eliminate the n-word from white people’s vocabulary is to eliminate it from all people’s vocabulary, for it’s still a racial slur with racist origins, even when used fairly innocuously, as in rap songs.  As a Jew, for instance, I’d claim that the words “hebe,” “kike” or “sheeny” are racist whether spoken by Jews or non-Jews. I never use them except to describe how others slur Jews.

Anyway, the dog I have in this fight is tiny, so let’s have a poll: